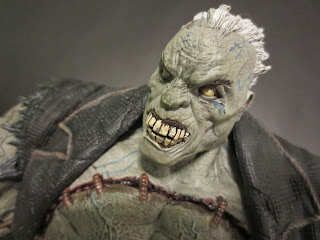 One of my biggest pet peeves is when a company only releases a few figures from a fantastic property or misses out on a major event for their most popular characters. I always felt like DC Direct/ DC Collectibles did this with so many of their various lines. There would be an awesome event or a classic Batman storyline and they would just completely pass it over. I really don't understand why DC Direct never just created an evergreen Batman line that continued to release new characters in a similar style. Instead, we had to cobble together Batman collections from here and there in  variety of artist specific styles. Heck, there are still plenty of significant characters like Batwing and Jason Todd as the Red Hood that we've never seen in action figure form (although DC Collectibles made sure that we had a Black Lantern Terra and Mattel made sure that we had Cyclotron. Thanks, guys!). Well, all that seemed to start changing when DC Collectibles released their first series ofArkham Asylum action figures. That wave was followed by another, and kept going through Arkham City and now Arkham Origins, delivering us plenty of great Bat heroes, villains, and other characters in a cohesive scale and style. Today I'm looking at Solomon Grundy who appeared in Arkham City as a boss Batman battled beneath the Iceberg Lounge. He's large and in charge. Ready for a look at this guy? Then join me after the break.... 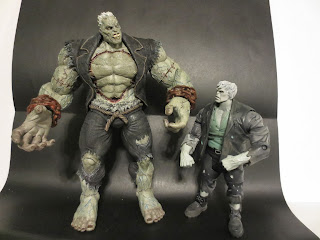 DC Collectibles has released a few deluxe sized figures so far in the Arkham lines (Killer Croc, Mr. Freeze, and Titan Joker) but this guy is the biggest yet. Solomon Grundy stands around 13 inches tall and weighs a few pounds. He's really, really heavy and puts most build a figures to shame. The Arkham games have their own style that translates really well to these figures. Grundy came in a large window box that shows off most of the figure through a viewing window.  DC Collectibles also lets us know on the box that we have Joe Menna to thank for sculpting this stunning piece (and I'll spoil it: this guy is a winner). 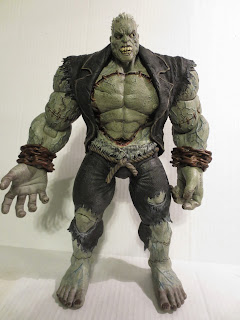 Solomon Grundy is not the most articulated figure, but that not too surprising for such a big guy. Honestly, though, the articulation isn't bad. He's got hinged knees, ball jointed hips, ball jointed shoulders, swivel biceps, hinged elbows, ball jointed wrists, and a ball jointed head. There are two things you'll notice about Grundy's joints: 1. They're fairly well hidden and don't interrupt the sculpt, and 2. They're not broken. Yes, some of the earlier DC Collectibles over-sized figures were quite prone to breakage (Killer Croc and Titan Joker come to mind) but Solomon Grundy seems quite solid. His joints are really tight, which is very important for such a heavy figure, and the arms and head offer a nice range of motion. I'm very happy with him as it kills me not to own those previously mentioned figures due to the breakage problems. 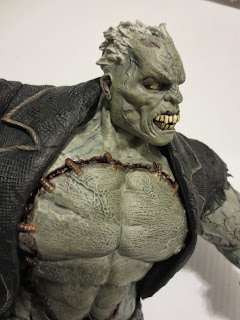 Grundy looks awesome. Probably being the first zombie in comics (he first appeared in October 1944) Grundy deserves a grotesque sculpt that will churn the stomachs of lesser collectors. That's exactly what DC Collectibles delivered. Grundy's flesh is covered, bulging veins, putrid looking flesh, and visible seams where he has been stitched back together (in the game Ra's al Ghul had spent years killing Grundy over and over while studying him). His fingernails and toenails are also hideously cracked (but surprisingly neatly trimmed). 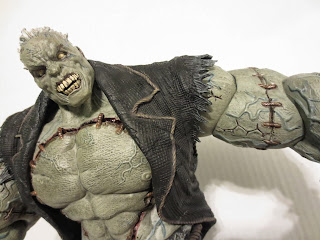 He's dressed in the remains of an old suit of some kind, perhaps a circus performer's outfit, and the outfit has some great texture and fraying effects sculpted into it. The only two problems I have with Grundy's sculpt are that his teeth look a little too large and the chains on his wrist are sculpted a bit softer than they need to be. They really are not as detailed as the rest of the sculpt; going with actual metal chains may have been a better idea, although they may not have wanted to paint them with a rust effect. 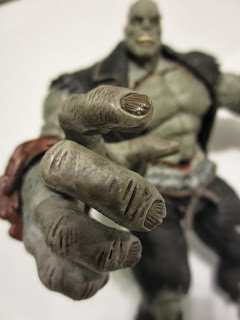 The paint work, though, is beyond reproach. It's just darn fine all around. The skin has a great grayish blue tint to it that manages to still be interesting while looking like decaying old flesh. The veins are a really odd blue color that helps them to stand out even amidst the excellent paint wash. Looking at how cool and grotesque this figure is reminds me of the cool stuff that McFarlane used to put out back in the late 90's and early 2000's when they were still interesting and relevant to the action figure industry. 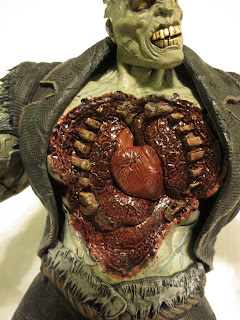 What do you give a guy like Solomon Grundy? Anything he wants!  Hahaha. 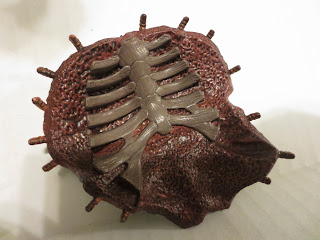 Really? OK, well what kind of accessory do you give a figure like Solomon Grundy? How about an opening chest cavity and a removable heart? In the game, busting open his chest cavity and punching out his heart is the only way Batman can stop this undead behemoth (the dude's dead and will certainly come back, so it doesn't break Batman's code or anything) so DC Collectibles chose to replicate that feature here. Grundy's chest is mostly made of a flap of rubber that is removable. It's kind of like the old Jurassic Park "Dino Damage" toys, but more gruesome! On the back of the chest flap is part of Grundy's broken rib cage and after removing the pice we can now see Grundy's heart and other organs. 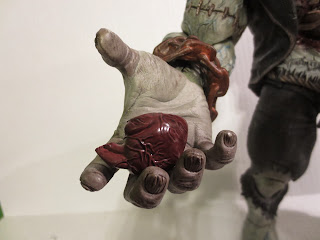 The heart also pops out and is really a cool piece. Grundy looks awesome with everything removed. The heart is rubbery and fits snugly in his chest cavity and the chest flap fits tightly against his chest with some help from being tucked under his outfit. Pure win here. 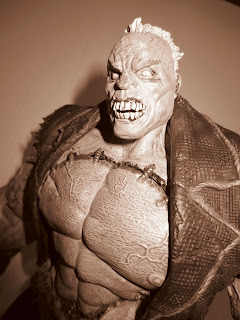 This guy is amazing. He's easily a confirmed EPIC action figure due to his size, sculpt, paint, and sheer awesomeness. While he's less of a "toy" and more of a display piece, that doesn't make him any less cool. While Mattel's DCUC Solomon Grundy build a figure was a pretty fantastic piece, I think this guy takes his place as the greatest Solomon Grundy toy ever made. DC Collectibles has really, really taken the ball from Mattel this year and offered up some amazing product based on both the Arkham videogames and the New 52 comics. Next year looks to be even better with more Arkham Origins figures (including Anarky, Firefly, and Clayface) and a line of Greg Capullo inspired Batman figures (including Talon), and I'm excited to see that they've overcome some of the issues of their transition from DC Direct to DC Collectibles and are becoming the company I've always hoped they could be.
Posted by Barbecue17 at 11/25/2014