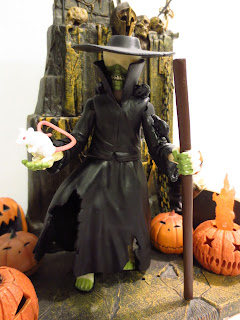 Can you handle another Teenage Mutant Ninja Turtles review?  I hope so because today I'm going to be looking at another classic TMNT villain who has made his way into both the new Nickelodeon cartoon and the toyline. It's the Rat King!  Yes, the crazed king of the rats is back and actually creepier than ever.  With all of the crazy Halloween candy I've been prematurely devouring I'm much too hyper to spend time setting this thing up, so let's get right to the review, shall we? 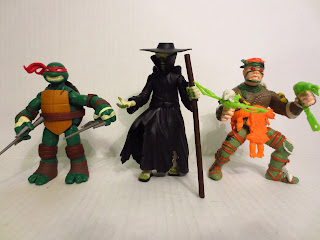 The Rat King is a little under 5 1/4 inches tall.  While the new TMNT toyline doesn't use a scale based on the size of the characters in the cartoon, as toys they all look just fine standing next to one another.  The Rat King seems to be a normal sized adult human, so he's just a little bit taller than the turtles.  While he's definitely a creepy figure, he certainly has slightly cartoonish proportions and details. 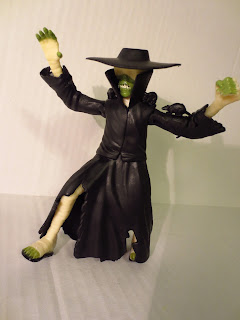 Articulation in the TMNT line has been all over the place.  While the turtles themselves are highly articulated for figures in this price range and scale, many of the other characters barely move.  Rat King, unfortunately, seems to be pretty limited.  He features ball jointed hips, a swivel waist, ball jointed shoulders, swivel wrists, and a swivel neck.  The articulation isn't atrocious, but when you factor in that the hips and waist swivels are very much hindered by Rat King's long black robe, the articulation is quite limited.  Everything moves and seems to be sturdy, but he's not going to be doing too much fighting.  Actually, he has a hard time standing unless you utilize his included walking stick, which I guess kind of makes sense. 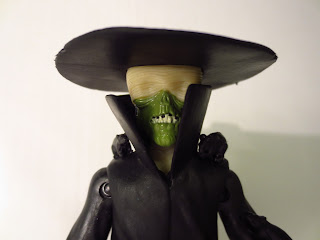 There have been a couple of different looks for the Rat King, but this one really departs from the rest of those. He looks like a mixture of Mumm-Ra in his mummy form and the Reverend Henry Kane from Poltergeist II: The Other Side.  Yup, once you see it you won't be able to not see it.  This of course means that this new version of the Rat King is pretty creepy.  He still keeps some of the elements of older interpretations of the characters, such as the rats crawling all over his body and the random tattered bandages he wears, but he's repackaged in a much creepier form.  I will say that without the rats, however, I'm not sure I'd be able to guess who this guy was.  His exposed flesh is green and wrinkly like a corpse's, and is covered with strands of bandages like a mummy.  The face is really gruesome with pruned and withered features, a nearly missing nose, and a lipless mouth.  You can actually see the depressions of his eye sockets in the bandages across his eyes.  Turn him around to see his stringy black hair, a sure sign that this guy doesn't use conditioner.  His outfit, which at first looked like a long black coat but seems to be more like a rope of some kind, is tattered around the bottom hem. The coolest feature of the character, though, are the rats on his body.  He's got two rats sitting on his shoulders and another on his left bicep just sitting around and waiting to do the Rat King's bidding. 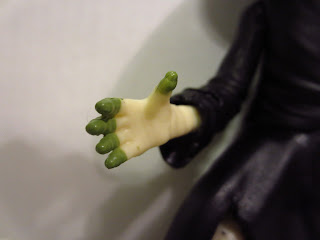 Like other TMNT figures, though, the paint work is a major weakness.  The bandages look fine, the face and exposed flesh are a nice ghastly shade of green, and it's hard to mess up black; the crime here is that Playmates did not paint the rats crawling on the Rat King's body. At all.  They're separate pieces that seem to have been glued on, so it seems that even molding these guys in white or gray would have been preferable.  Yes, I know rats can be black, but it really hurts the design of the figure when these guys blend in with the coat.  A simple paint app, or having molded these guys in a different color, would have helped this figure tremendously, but as it stands it just reeks of laziness. 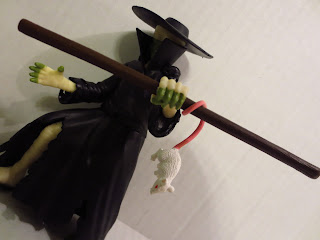 One of the best things about the vintage Teenage Mutant Ninja Turtles figures from Playmates was the vast amount of cool and often kooky accessories that came with each figure. The new line doesn't seem to be to focused on accessories, which is disappointing. Still, the Rat King does come with two goodies: a pet rat and a staff.  The rat is quite cool--it's an albino with red eyes and white hair. The tail is painted pink and helps it to stand fine on it's own, or to be draped over the Rat King's wrist.  The second accessory is a simple brown staff that's 4 1/2 inches long and fits securely in the Rat King's left hand.  It allows him to stand up, so perhaps it's supposed to be his version of a cane used by visually impaired individuals. Considering his eyes are covered by bandages, that's how I'm going to use it. 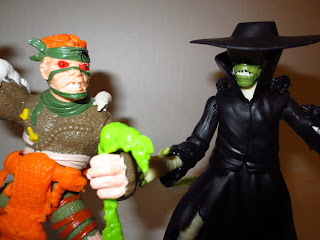 So, a creepy redesign, good head sculpt, disappointing paint, and OK accessories.  Let me think about this. *Time passes* OK, I think I'm going to go with a Good here.  I like the sculpt, and the accessories are pretty cool, but not mind blowing. It's those little unpainted rats that just drag the score down here. Digging out my vintage Rat King, even he had his little rats painted, and he was made in the 1980's.  This guy really had some potential, but a few questionable decisions robbed him of true greatness. He's still a fun TMNT villain, but certainly not one of the best figures in the line.
Posted by Barbecue17 at 11/25/2014