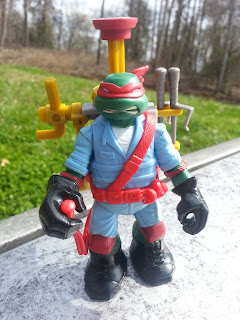 While we haven't seen any new characters yet this year, Playmates Toys does have some new Teenage Mutant Ninja Turtles figures being released: the "Ooze Tossin' turtles.  Running with the theme of multiple, wacky versions of the turtles, which has always worked so well in previous TMNT lines, Playmates is now giving us "Ooze Tossin'" version alongside some new vehicles as well.  Each turtle comes dressed in a snappy jump suit with an ooze throwing catapult backpack (ooze sold separately, dudes).  In general, I'm trying to avoid picking up various versions of the same character in this line but this figure was 1) Raphael, my favorite turtle and 2) on sale for $6.99 at K-Mart.  So, how is the figure?  Read on and find out! 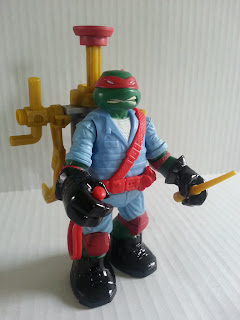 The first thing you'll notice about Raphael is that like the rest of Playmates TMNT figures, his sculpt is completely unique, including his headsculpt.  That's incredibly refreshing to see in a day and age when most toy companies want to reuse as much tooling as possible.  Raph's is decked out in a blue utility jumpsuit with black boots and gloves and a cool red harness that assumably keeps the ooze tosser strapped to his pack. I've actually seen some fan made customs of the turtles as Ghostbusters using these figures, so that certainly helps to convey the vibe they have.  Other than the bandannas, Raph doesn't look too much like a ninja. Still, it's a cool and unique look and the outfit is covered with great detail.  Check out the non-skid soles on his boots and the little respirator on his belt.  The handle that controls the ooze thrower is actually permanently attached to Raph, not to the backpack. It's a nice rubbery plastic that doesn't feel flimsy at all.  The only thing that threw me a bit is that this Raphael is noticeably shorter than the standard Raphael figure, although you're only going to notice that if the two figures are displayed together.

﻿
Raph's accessories are probably the main selling point of this figure as he is predominantly a glorified action feature. Raphael comes with the ooze tossing backpack, three red plastic ooze clumps, and a cleaning pick.  He also has an instruction sheet which instructs you how to operate the toy.  The backpack is really nicely done. It attached firmly (and permanently, I believe) onto Raphael's back.  It is made up of multiple pieces but is solidly put together.  The top of the pack is removable and serves as both a lid for the ooze tank and a plunger to move it through the backpack. There are lots of cool details on the backpack (the packaging says the packs were built by Donatello) including a weapons rack to hold extra accessories and a place to store the cleaning pick. The cleaning pick is a yellow spike like weapon that can be held by the figure, stored on the backpack, and used to clean out the spout where ooze flows through.  The three ooze chunk are simply solid red plastic globs that can be launched from the catapult if you don't have ooze.  Accessory wise, Raphael came with more than I thought he would, as the ooze chunks and cleaning pick were hidden in the package.

The action feature is quite cool. You open the top of the lid and put the ooze in the tank.  When you push down on the plunger on top of the pack, the ooze feeds through a spout that empties into the catapult arm.  When the arm is full, wiggle it a little and the ooze will separate allowing you to swing the arm and throw ooze at enemies. It works really well and while I don't imagine I'll be launching ooze to often (my wife frowns on that sort of thing) kids and single collectors will have a blast with this.

Playmates Toys' TMNT line, both the classic figures and the figures based off of the Nickelodeon series, were some of my favorite action figures of last year.  They're unique, funky, and fun, just like the turtles.  They're also extremely popular with both the kids and collectors.  While I'm sure some collectors will be interested in these 'Ooze Tossin' turtles, these definitely seem more geared towards kids. The turtles are not very articulated and the whole figure is essentially a glorified action feature. Of course, tossing ooze and other messy stuff is fun (I had fun playing around with it) so there's definitely some fun to be had. Still, a little bit better articulation and possibly making the backpack removable would have greatly improved this toy. Still, it's a good figure and a worthy successor to some of the crazy TMNT figures in the original line.
Posted by Barbecue17 at 11/25/2014