Action Figure Review: Sea Hawk from Masters of the Universe Classics by Mattel 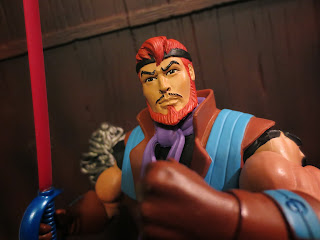 Sea Hawk is the captain of the Solar Sailor and one of those pirates with a heart of gold beneath his rugged, roguish exterior. Appearing in a few episodes of She-Ra: Princess of Power, Sea Hawk made an impression on many Masters of the Universe fans with his charismatic and swashbuckling demeanor, his snappy fashion sense, and his inexplicable combination of having red hair and a red beard combined with black eyebrows and a  mustache. As the November figure in Mattel's Club Filmation subscription, Sea Hawk is actually a bit exclusive as he was not available for sale to non-subscribers on Mattycollector.com. We've known this for awhile, though, and clearly it was a sales tactic to encourage people to subscribe and not just a random instance of Sea Hawk being a figure made in lesser numbers. So, ready to ready to read about a pirate with a laser sword and an ascot? Then join me after the break.... 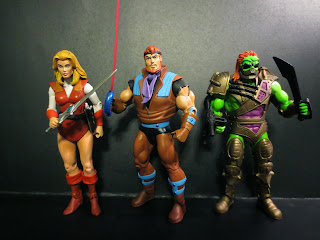 Sea Hawk measures in right around 7 inches, pretty much exactly the same as every other male figure in the line. He shares a few of the basic body parts (torso, biceps, thighs) but features quite a few new pieces as well. While being based on a Filmation character, Sea Hawk has a lot of detail in his design and nicely bridges the gap between the simple Filmation style and the MOTUC aesthetic. 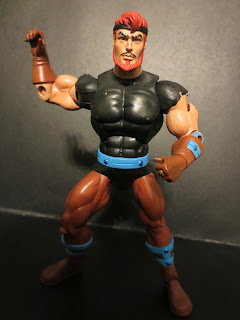 Sea Hawk should be able to get in most any swashbuckling pose you deem necessary as he features the standard and superb MOTUC articulation: hinged ankles w/ limited lateral movement, boot swivels, hinged knees, swivel thighs, swivel/ hinge thighs, a swivel waist, an abdomen hinge, swivel/ hinge shoulders, swivel biceps, hinged elbows, swivel wrists, and a double ball jointed head. Everything is nice and tight with no quality control issues, something I'm happy to repeat over and over again this year. The only issue you might have regarding articulation is that due to his vest being a solid "armor" piece, Sea Hawk's ab hinge is limited. Of course, you can remove the vest and free him up a bit more, if you'd like. He's also a bit tight in his biceps which tend to rub against the back of his shoulders, so expect to have to apply just a little force when posing them. 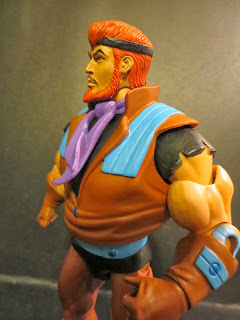 Let's address the obvious complaint that's been making the rounds for a few months now: Sea Hawk looks a wee bit hefty. There's two major reasons for this, the first being that while we're accustomed to seeing Sea Hawk in his slimmer form in She-Ra: Princess of Power, the MOTUC aesthetic is to design all of the male figures figures in the chunky, bodybuilder style of the vintage line. That is part of the reason why Sea Hawk looks bulkier than usual, but the second reason is that his vest his made of a thicker rubbery plastic that sticks out a lot on the sides. While we typically see characters wearing armor, we don't see as many wearing extra layers of regular clothing. Characters like Dekker and Adam didn't have as much of a problem as poor Sea Hawk here, so Mattel just needs to work on a thinner plastic for future releases that require "clothing" of some kind. I don't think it looks terrible, but, I like the slightly bulkier look for MOTUC. Of course I've also put on a few pounds thanks to two straight months of reviewing Halloween candy, so maybe I'm just encouraged that a studly dude like Sea Hawk carry a spare tire, too. 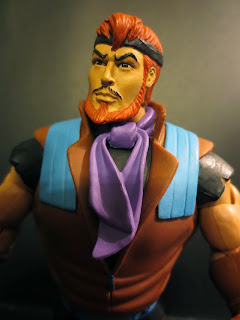 Other then that issue Sea Hawk looks fantastic. The head sculpt really matches his Filmation appearance (I love the eyebrows) and the outfit is nice and detailed. His ripped sleeves are a new shoulder piece and the gloves with some type of armored plating also complete his look and give him a unique vibe. I wish the ascot were a separate piece so other characters could wear it (Adam would look really funny with it) but it's a molded as part of the vest. Notice the ring on Sea Hawk's left hand- it's the Impact Ring given to him by his father, The Falcon. Such a cool little detail from the cartoon that's been nicely captured here! 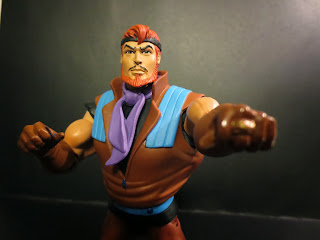 There's some rough edges gloves, but fortunately most everything that's highly visible looks good. The head is perfect (yes, the hair is red while the eyebrows and mustache are black) and details like the metallic blue rivets on the belt, gloves, and boots are neat and clean. The color scheme of blue and brown with a bit of black and purple mixed in looks pretty good and is sure to make Sea Hawk stand out on the shelf. 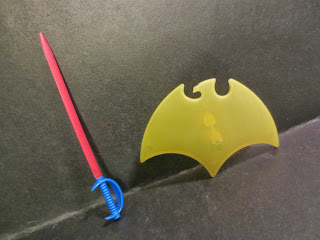 Other than the removable vest, Sea Hawk comes with two accessories- his cutlass and a falcon shaped shield. The cutlass is the Photon cutlass left to Sea Hawk by his father that looks a bit like a lightsaber cutlass. The blade looks more yellow or orange in the cartoon, but is rendered here as a translucent red blade with a blue hilt. It's neither gummy nor brittle and looks fantastic when used to duel the Horde! The falcon (or hawk) shaped shield is cast in translucent yellow plastic and has a clasp on the back that should be able to attach to Sea-Hawk's wrists, but it doesn't. Because of his flared gloves it's a little too thick. It does, however, fit over his hand where it belongs. Yes, I believe the idea is that this energy burst emanates from his Impact Ring to function as a shield of sorts. It looks really cool that way and I'm pretty happy with it. 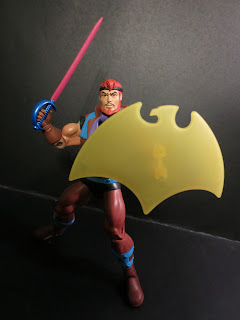 Sea Hawk was definitely a Filmation character I was looking forward to and I can't say I'm disappointed by him. Yeah, I get that he's a bit bulky and I can understand that many fans aren't happy with that as a design choice, but I'm not too upset by it. He's got some nice accessories, a great headsculpt, and lots of new parts that add a lot of character. While I really want more Princess of Power females to fill out the roster of the Great Rebellion (which still feels like a gathering of concerned citizens due to the few figures Mattel has released so far), Sea Hawk is a very welcome addition. He's a Great figure and one that I would imagine even MOTU fans would be able to incorporate into the Heroic Warriors since he's essentially a bearded pirate with a lightsaber. If you already have a Han Solo figure and still need more scoundrels in your life, give Sea Hawk a go. You'll be glad you did. 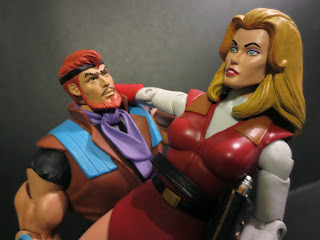