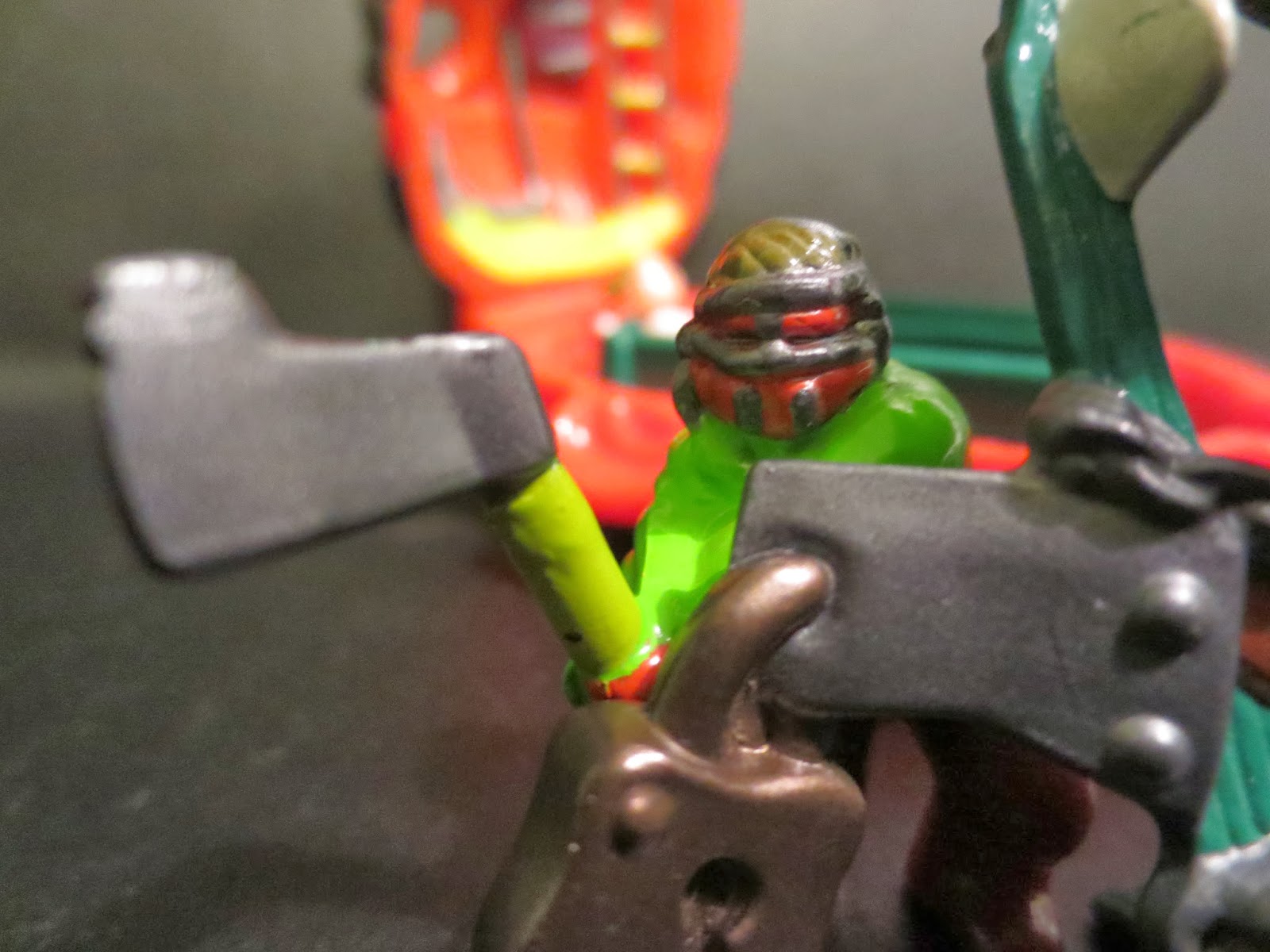 It's Monday! That means it's time for another edition of Micro Monday! This week I'm looking at another Mighty Max set: Mighty Max Tangles with Lockjaw. Lockjaw is from the second series of Horror Heads and was released in 1993. I never owned this set as a kid; in fact, I just received it in the mail last week. I love how varied the sources of inspiration for the Mighty Max sets are as one minute you can have a set dealing with space aliens and the next minute you can have a set dealing with giant vampire bats. I loved the creativity of each set as a kid and still appreciate the detail and thought that went into each set even more as an adult. Take today's review, Mighty Max Tangles with Lockjaw. It's a set with a hulking, ax-wielding maniac chasing Max through an old barn. Doesn't that kind of remind you of Friday the 13th: Part 3 or Halloween 5: The Revenge of Michael Myers? I love these cool little nods to other horror and film franchises! Let's jump in and see all that Mighty Max Tangles with Lockjaw has to offer, shall we? 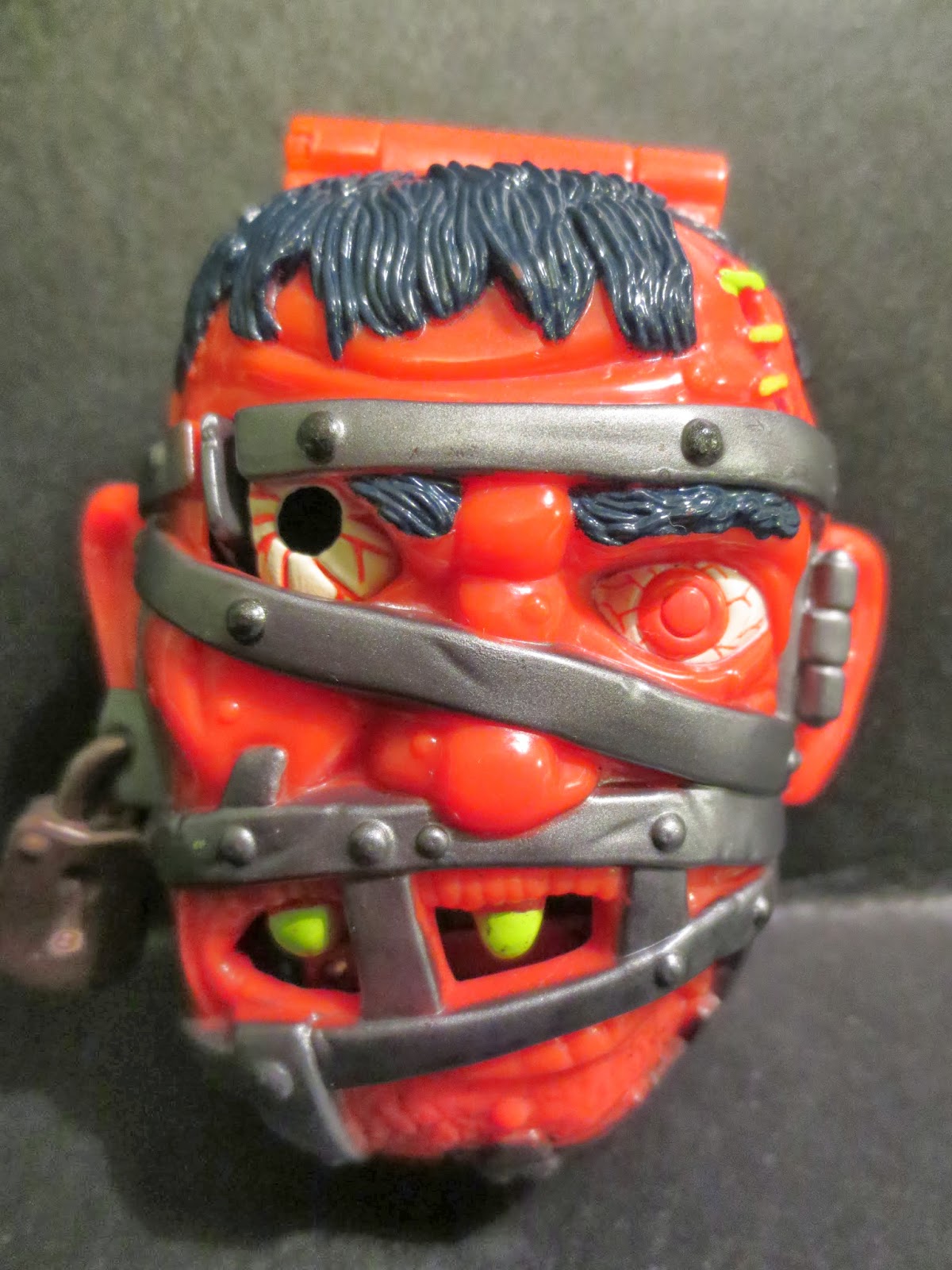 Lockjaw is a Horror Head, so it's fairly small when closed. It's really only about three inches long and two inches wide. While many of the Horror Heads looked nothing like the characters inside, Lockjaw actually bears a pretty decent resemblance to the included villain in this set, Big Red the Lumberjack. Yeah, the microfigure isn't called Lockjaw, he's called Big Red. Kind of odd right? Anyways, the Lockjaw case is a fantastic design. He's a big red brute wearing a metal restraining mask of some kind. As if his bloodshot eyes, wart covered skin, and putrid green teeth weren't enough to hinder this guy's social life, Lockjaw has this crazy mask locked onto his head via an enormous padlock on the right side of his face. 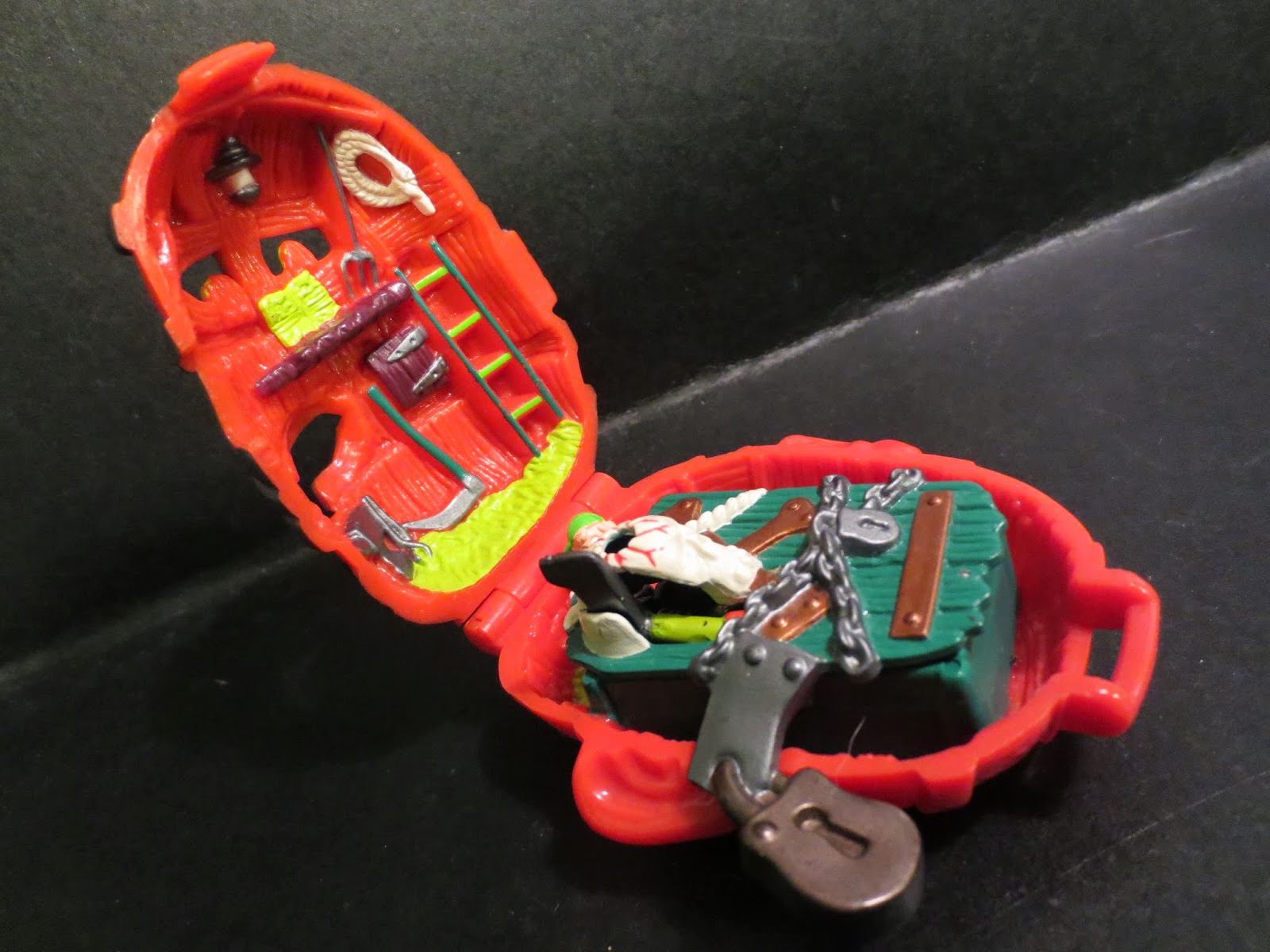 When you open the set up, you can see that it is clearly intended to stand with the base flat and the "face" up at a 90 degree angle to serve as a backdrop for the action. It's a rickety old barn filled with sharp farming tools, hay, and a giant wooden casket. I really like this set as it is a huge improvement over most of the first series Horror Heads as they often felt very ill-defined in terms of the details of the set. 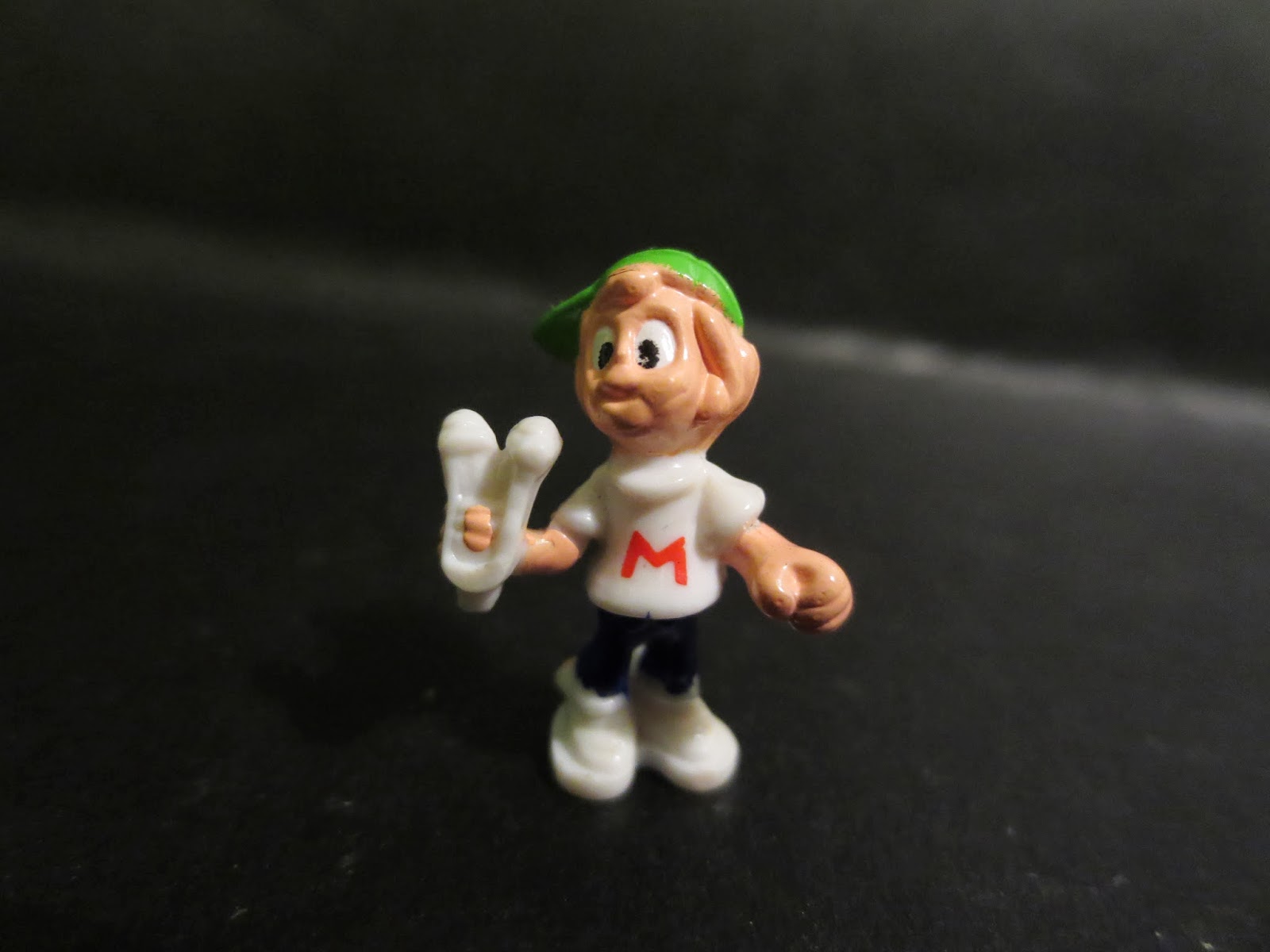 Most every set came with a random Max figure (a few later sets came with a special designated Max) and this set has a "kid" Max with a green ball cap and a slingshot. There were eight different "kid" Max figures available in the series that could be found in the different sets. I've always preferred the slingshot version, myself. 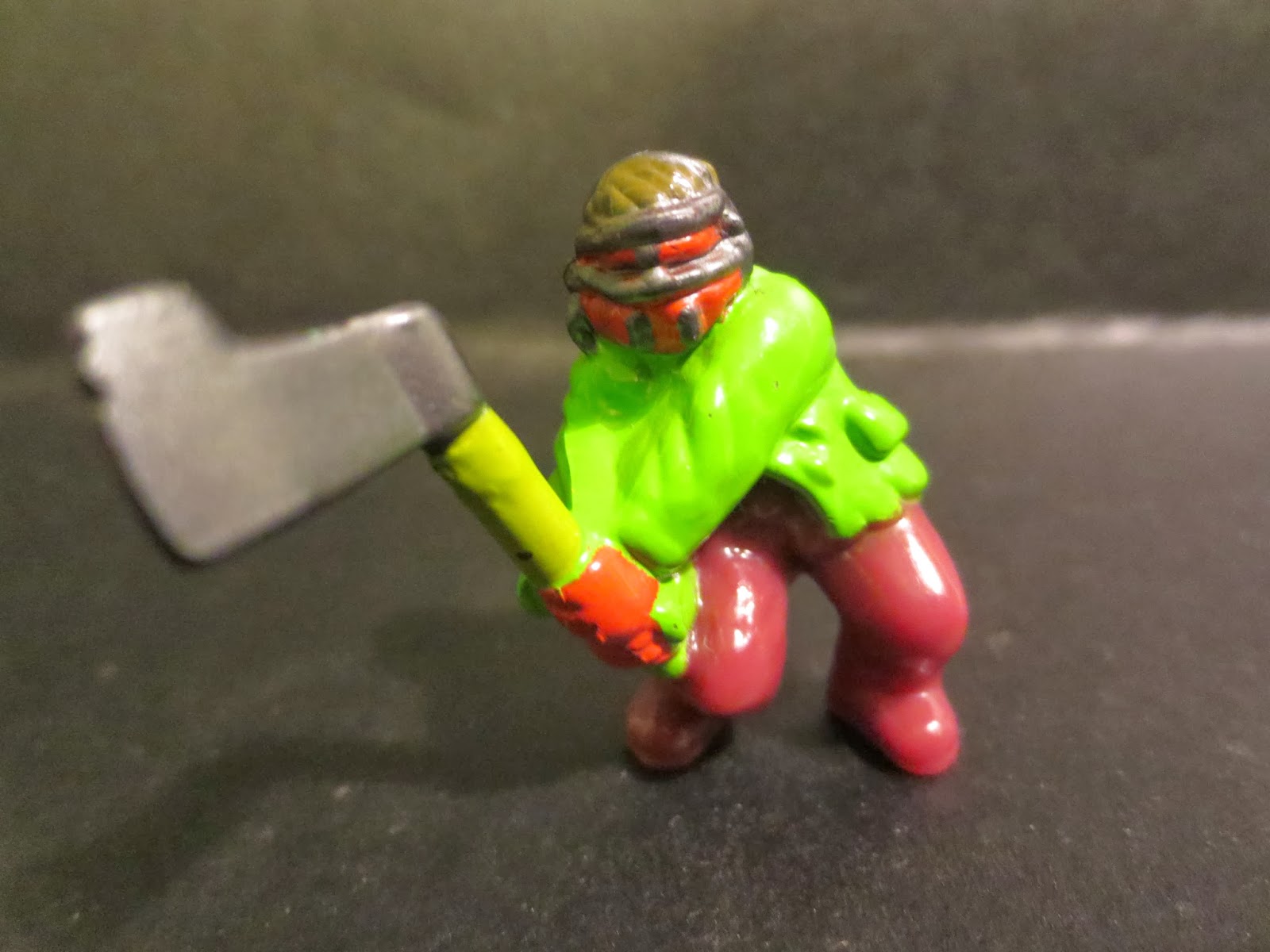 The antagonist of this set is the vicious Big Red the Lumberjack. Big Red is almost 1 1/2 inches tall and is wearing a stylish neon green coat and burgundy trousers. As I mentioned earlier, his face does resemble the Horror Head case as you can see the metal clasps and lock on his tiny red head. He's also hunched over a bit as if he were in the middle of swinging his giant ax. He's a pretty cool microfigure that reminds me of a villain you would have seen in Monster Party or Splatter House. 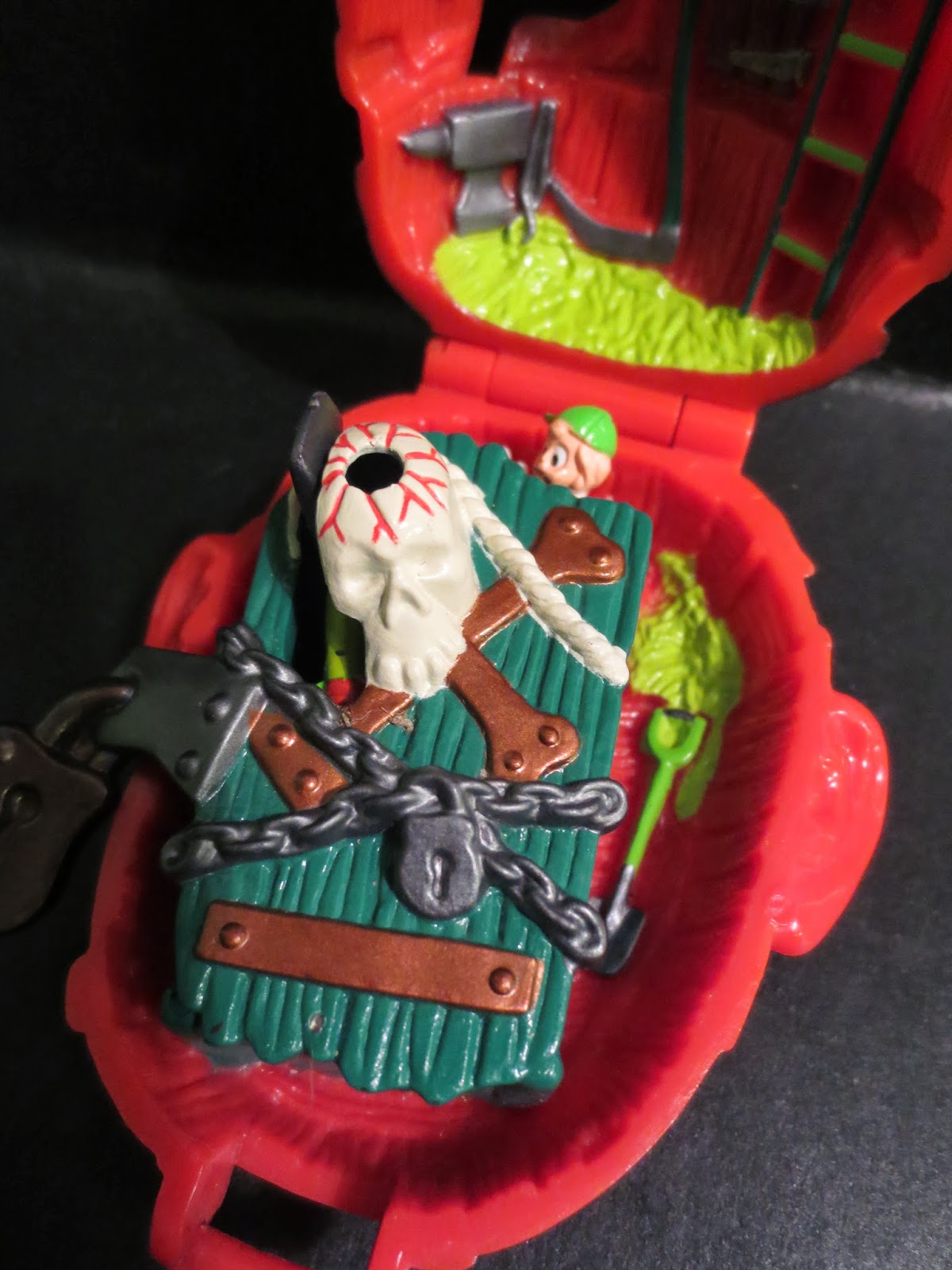 The base of the set is the floor of the barn. There's hay strewn about and a solitary shovel resting next to a massive coffin that's locked with an enormous coffin. There's also a small footprint for the Max figure to stand in for storage. The coffin lid has a wood grain texture to it and is sealed with chains, iron bracing, rope, and an enormous skull. There's a hole in the lid that shows the tip of an ax poking through, and since the lid is removable it can be removed to reveal.... 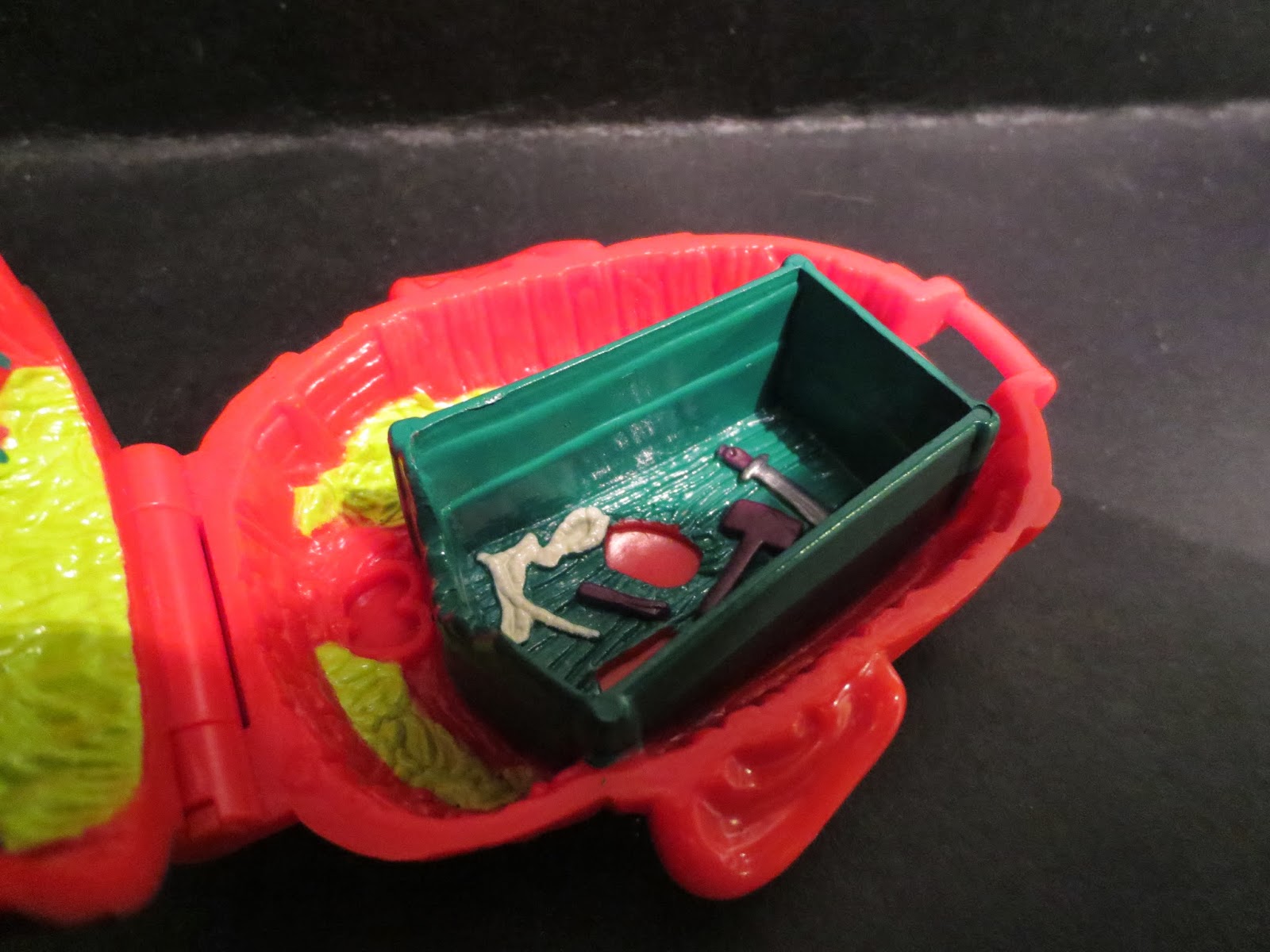 Big Red! This is his coffin apparently! I'm not sure if we're intended to assume that Max dug this guy up or that Max is sealing him in the coffin to defeat him. On the floor of the coffin scattered about are some various tools and weapons: a sword, a hammer, a steak, and a rope. There's also a footprint for Big Red to stand in as if he has just busted his way out of the coffin. 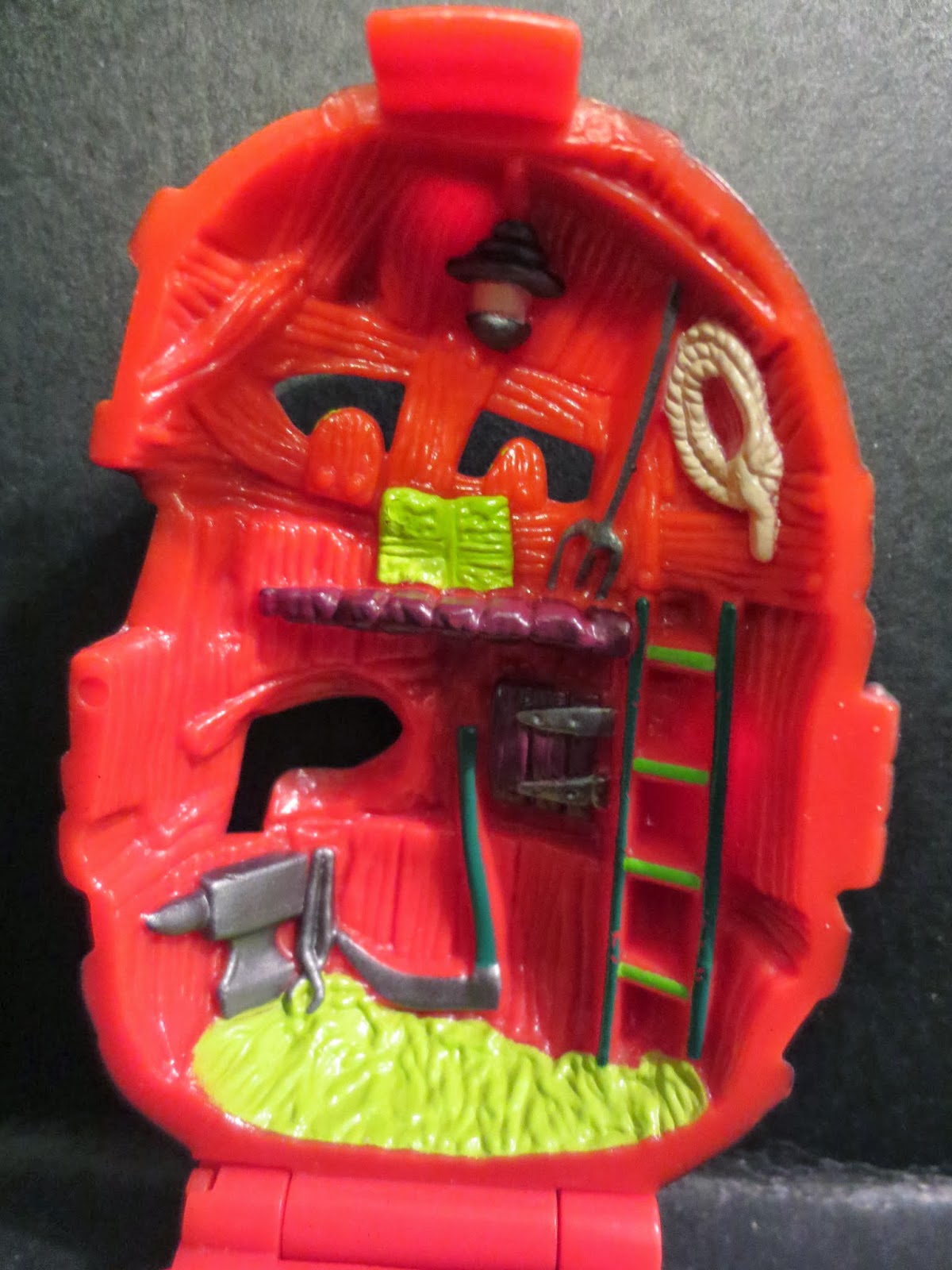 While the rear of the set is not really deep enough for Max or Big Red to stand in, it does provide an excellent backdrop for play and display. The ground floor has a giant anvil, a pair of blacksmith's tongs, a scythe, and a small wooden hatch. There is a ladder that leads up to a loft with a hanging lantern, hay bale, pitchfork, and a rope. The barn really looks like it is composed of wooden boards. 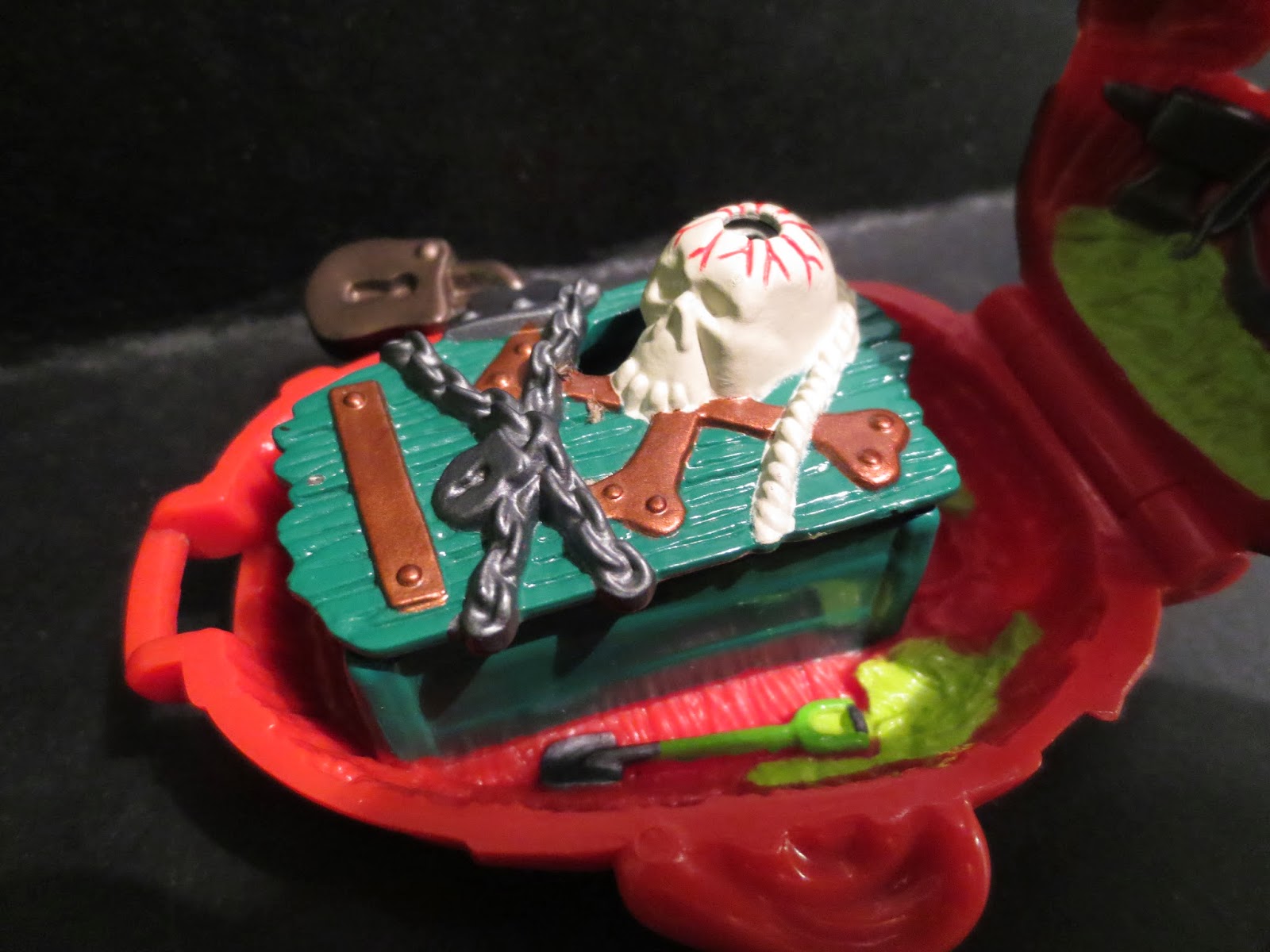 When storing the set, Max stands in his designated footprint and Big Red is laid down flat in his coffin with the lid on top. The lid of the coffin provides the eye and the lock for the Lockjaw sculpture on the set's case while Big Red's ax tip serves as a sliver of the face mask. 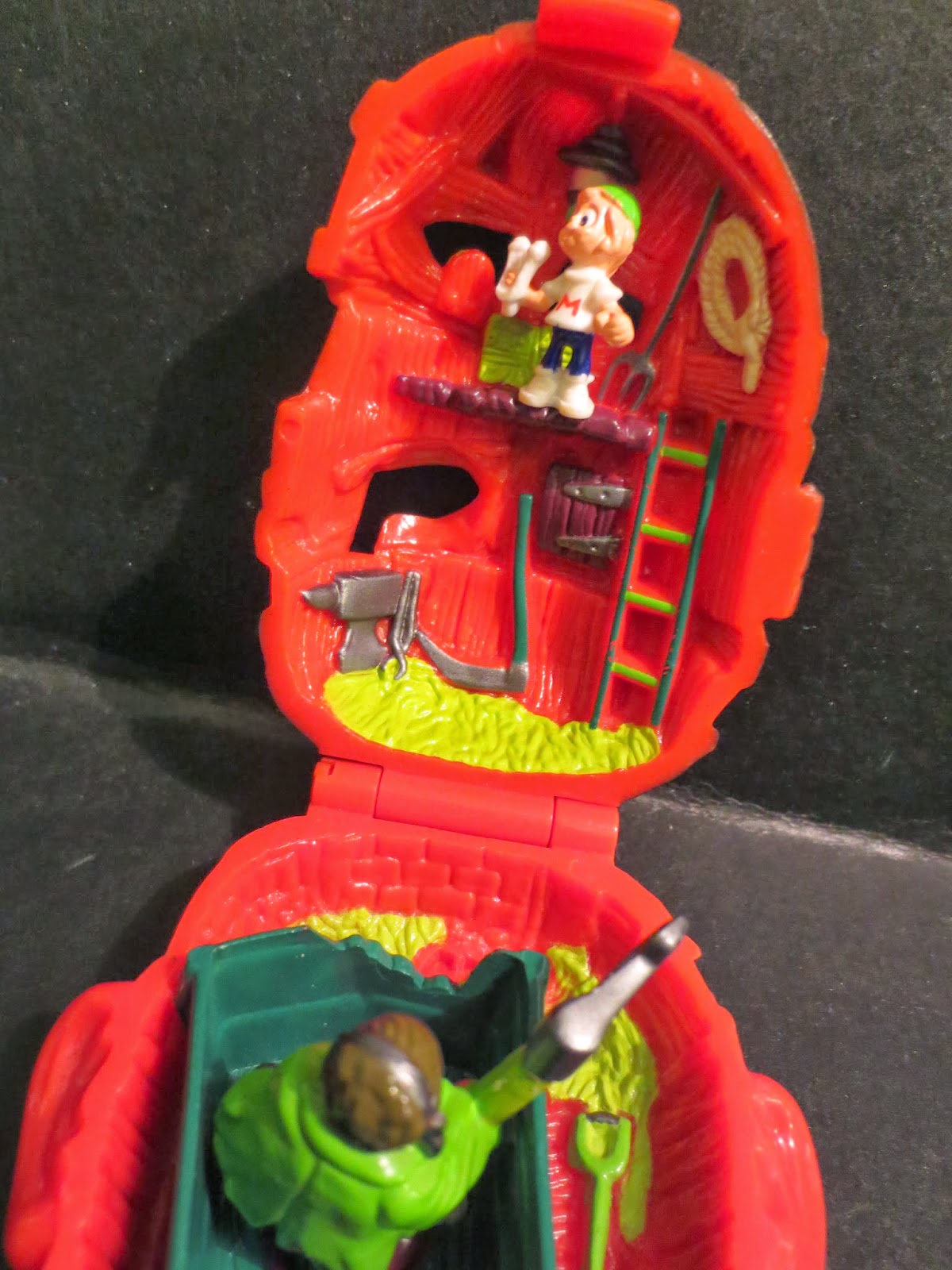 While the first series Horror Heads were simply fun and novel with nice microfigures, the second series really elevated the quality. Lockjaw has a great villain figure, a recognizable background that creates a very cool play area, and a feature of some kind (the opening coffin). I'm giving Lockjaw a Great and a 1/2. This is an excellent Horror Head that far surpasses any from the first series. While some toylines diminish in quality over time, Mighty Max really improved with every new series and release. Had this line lasted a bit longer, who knows what amazing stuff we might have seen?