Action Figure Review: Rokkon and Stonedar--The Comet Warriors from Masters of the Universe Classics by Mattel 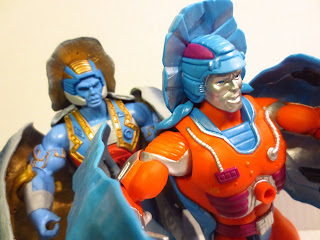 For their SDCC 2013 exclusive, Mattel decided to let fans scratch two vintage Heroic Warriors off their lists by offering a 2 pack of Rokkon and Stonedar, the only two Masters of the Universe characters I still get confused from time to time.  Released as part of the 5th series of figures in the vintage Masters of the Universe line, Rokkon and Stonedar are also known as the Rock People or the Comet Warriors, and feature the gimmick of being able to transform from a humanoid figure into a comet.  Rokkon and Stonedar represent two of the three Rock People found in the vast body of Masters of the Universe lore; the third is Granita, a female Rock Person who was planned for the vintage line at one point, but was later scrapped.  This release of Rokkon and Stonedar in Masters of the Universe Classics is quite interesting because 1.) Mattel kept the action features intact and 2.) while released as an SDCC exclusive, the only difference between the convention release and the release available on Mattycollector.com is the presence or absence of the SDCC 2013 sticker.  I'm actually pretty pleased with this, especially considering the pain that SDCC exclusives can sometimes be. Ready to jump in and take a look at these crazy Comet Warriors? Then join me after the break....

While they reuse many parts from past MOTUC figures, Rokkon and Stonedar are a little taller than your standard figure due to the rocky crests on their heads.  Both stand right around 7 1/2 inches tall and feature a mixture of new and reused parts.  Rokkon, the younger Comet Warrior clad in bright orange, blue, silver and magenta, reuses Trap-Jaw's feet, boots, forearms, and biceps, Man-E-Faces' ribbed shoulders, and the standard hands, thighs, abs, and chest.  Stonedar, the older Comet Warrior clad in blue, red, gray, and gold, reuses Trap-Jaw's boots and forearms, Snout Spout's feet, Roboto's biceps, the flat ab piece, and the standard thighs, hands, shoulders, and chest.  The reuse of parts means that these guys will fit in perfectly size-wise with other MOTUC figures.

Articulation for both Rokkon and Stonedar is pretty standard for MOTUC, albeit with a few minor exceptions.  Both figures feature hinged ankles (w/ minor lateral rocking), boot swivels, hinged knees, swivel thighs, ball jointed hips, swivel waists,  hinged abs, ball jointed shoulders, bicep swivels, hinged elbows, swivel wrists, and ball jointed heads.  All of the joints move like you'd expect on a MOTUC figure, which is definitely a plus; the ankles are tight and there's no QC issues on my set. Actually, I haven't had any QC problems with MOTUC in quite some time, which is definitely a good thing. Ready for the articulation exceptions? OK, well first the Rock People have a much wider range of motion in their hips due to much less restrictive crotch pieces.  This was done to make sure that they can easily bend over more in order to transform into their comet forms, and it serves that purpose pretty well.


Secondly, the articulation is hindered a bit when all of the exterior "comet" parts are attached.  The way Mattel managed to pull off the Rock People's ability to transform was by including snap-on armor. It works quite well and consists of multiple pieces of individualized armor that snap on at various points. To complete the full transformation, each figure uses the crest on the back of their head, left and right arm pieces, left and right leg pieces, a back piece that features a hinged waste flap, and a large, curved base that the figure rests on and snaps into to complete the comet appearance.

The transformation is pretty easy to perform and looks quite impressive when fully complete.  The comets are quite large and well detailed--Rokkon's comet form has lots of flat surfaces, sort of like a large crystalline structure, while Stonedar's looks like a more traditional meteor with craters and crevasses.  The interiors of the armor pieces feature a few little details, such as wires, panels, and laser pistols.  Mattel really gives you quite a few display options as you can display these guys in their comet forms, in their humanoid forms with their comet armor, or in humanoid form without the comet armor. 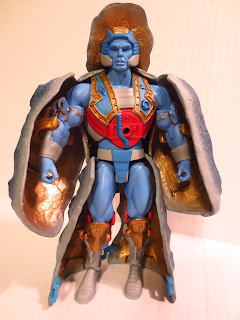 While I've already mentioned that Rokkon and Stonedar feature plenty of reused parts (which really is par for the course with this line), the parts chosen work well alongside the new parts to give these figures appearances that represent the vintage toys quite well.  Each figure features a new waist piece, chest armor, and a head.  The chest pieces are not removable and fit over the basic torso to bulk up the characters and give them the more detailed bodies of the vintage figures.  Rokkon's belt features a cool grid-patterned belt buckle, and his chest piece has various wires, padded ribs, and tech pieces.  Stonedar has a blander waist piece, but a really cool chest piece that looks to have shoulder straps and some detailed "techy" panels. Perhaps the one on his right is a rank insignia of some kind? 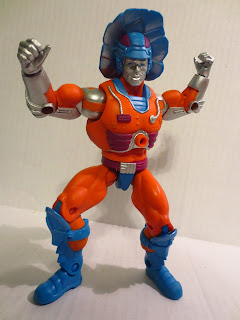 The only detail from the original figures that seems to be missing and proves to be somewhat detrimental to the look of the figures are the thigh straps that the vintage figures had.  It seems like Mattel tried to acknowledge these with the colors and placement of the armor clips, but even an additional paint app on the thigh may have been useful to help break up that piece.  A large blank piece on a fairly busy figure does tend to look out of place.  Both of the head sculpts are quite impressive, however, and do have quite a bit of character to them.  While both have fairly stern expressions, you can definitely see Stonedar's age in his sculpt (he's the elder of the two).  Their helmets are pretty cool, as well (Rokkon's kind of reminds me of Mainframe's from G.I. Joe). 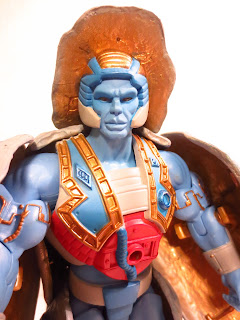 MOTUC has a very different style aesthetic than something like a NECA movie-based figure or a Star Wars Black toy that strives for realism, so being "toyish" here isn't necessarily a bad thing. Mattel kept the slightly garish color schemes of the original figures, and for the most part they work well here.  The body parts on both figures are molded in their predominant colors but do feature some paint apps to add on the details.  There are a good number of applications on each figure and, for the most part, they're neat and clean.  The comet armor is especially nice and features some nice shading techniques, inside and out, to make the rocky parts interesting. 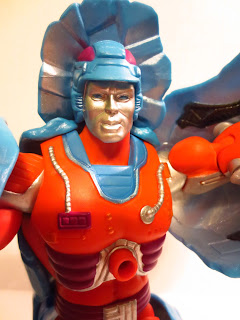 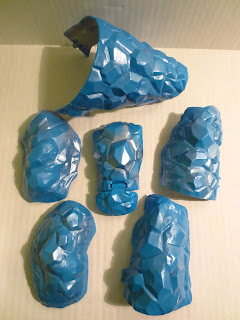 Well, the Rock People each come with the five removable pieces of armor and the comet base mentioned above, so that's already a good bit of extra stuff.  To really give them something to use in battle, though, they come with their laser guns.  They are each a little different near the back (just like their vintage counterparts) and can either be held in hand or plugged into the front of the Comet Warriors' armor.  They'll even stay in place when the Comet Warriors are transformed, which is a really cool feature.  Rokkon's is purple and silver, and Stonedar's is red and gold. 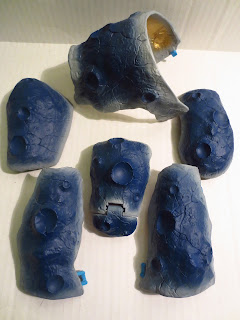 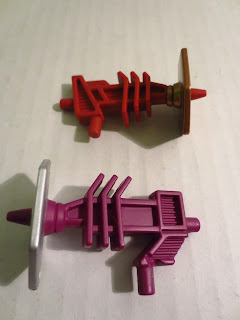 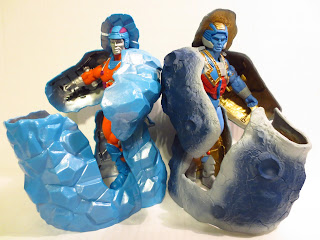 Many fans had made sketches suggesting various ways that the Comet Warriors and their unique features could be executed within MOTUC, and in the end it looks like Mattel and most fans were on the same page. Other than offering 100% new sculpts on these guys, I'm not sure Mattel could have done any better in their execution.  They're fully functional, feature cool details and a nice mixture of parts, and really match their vintage counterparts well. In the end, however, I think that, personally, I may just not be a big fan of the Rock People. I don't dislike them in any way, but I certainly don't count them among the figures that I was chomping at the bit to see in MOTUC.  Still, I can't deny that these guys are solid and Mattel knocked out two vintage figures with one stone(dar). I'm going to say these guys are easily a Good and a 1/2, although if you love the Comet Warriors, these guys might be some of your favorites and worthy of a higher rating. 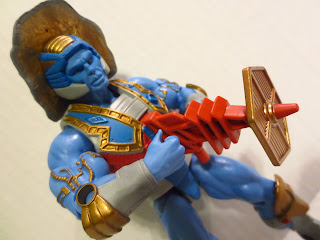 I'd love to see Granita at some point to complete the trio, although being that she's not a vintage figure and appeared only a time or two in media, I imagine that she's not factored into the new road map for 2014 or 2015.  I'll also take a minute to say that, while Mattycollector.com did have lots of trouble the morning these went on sale (it practically crashed), the figures seemed to hang around long enough for most fans who wanted a set to get one.  That's better than the SDCC exclusives for many other companies, so props to Mattel for a job well done.  I didn't even get a chance to pick up SDCC exclusives from Hasbro, NECA, and a few other companies. 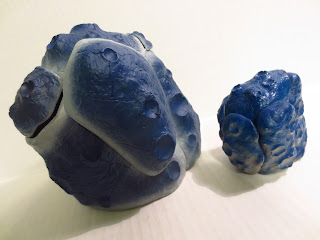