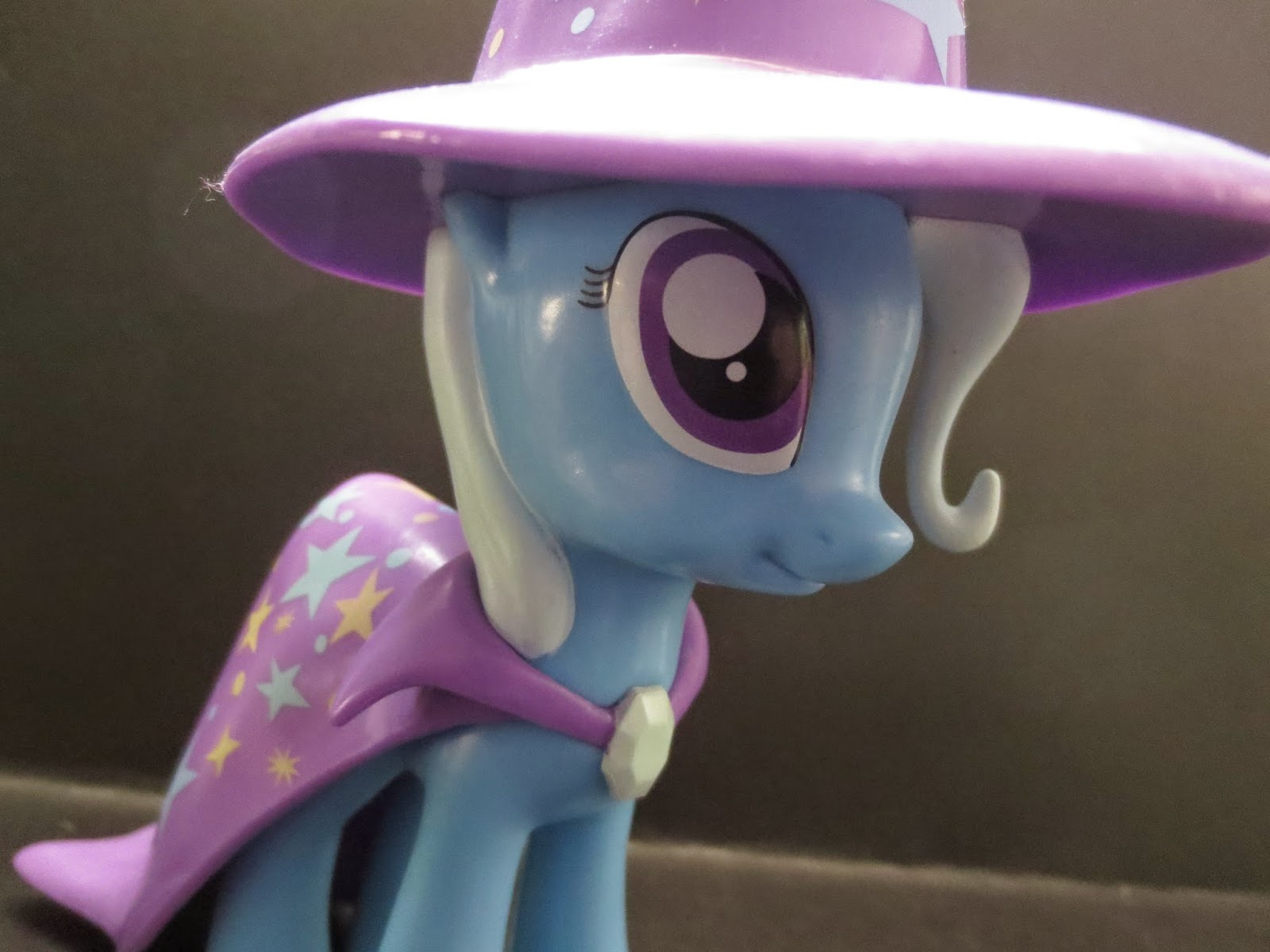 Evil magicians have a place in the world of horror, right? They do on day 26 of 31 Days of Toy Terror! And yes, I'm reviewing a My Little Pony: Friendship is Magic figure. But c'mon, this is a character who boasts: ""I hereby challenge you, Ponyvillians: anything you can do, I can do better. Any takers? Anyone? Or is Trixie destined to be the greatest equine who has ever lived!?!"

That's a pretty bold statement, am I right? Trixie Lulamoon is a unicorn and a traveling magician who first appeared in the first season episode"Boast Busters" where she caused trouble for the residents of Ponyville. While she's not downright evil or anything, she's boastful and makes a great antagonist for the Mane 6. Before we get any further, let me point out that Trixie is not one of the standard My Little Pony: Friendship is Magic toys from Hasbro. Instead, she is from a line of vinyl collectible figures from Funko. While these are marked as suitable for older children, they're actually sold at places like Hot Topic, Books a Million, and comic shops. Yeah, they're really intended for the bronies and pegasisters out there and not the kiddies. I really don't pay much attention to Hasbro's offerings, but Funko's line is much more show accurate, features more obscure and fan favorite characters (including males like Dr. Whooves), and offers some limited edition exclusives. Anyways, ready for a look at the great and powerful Trixie? Then join me after the break.. 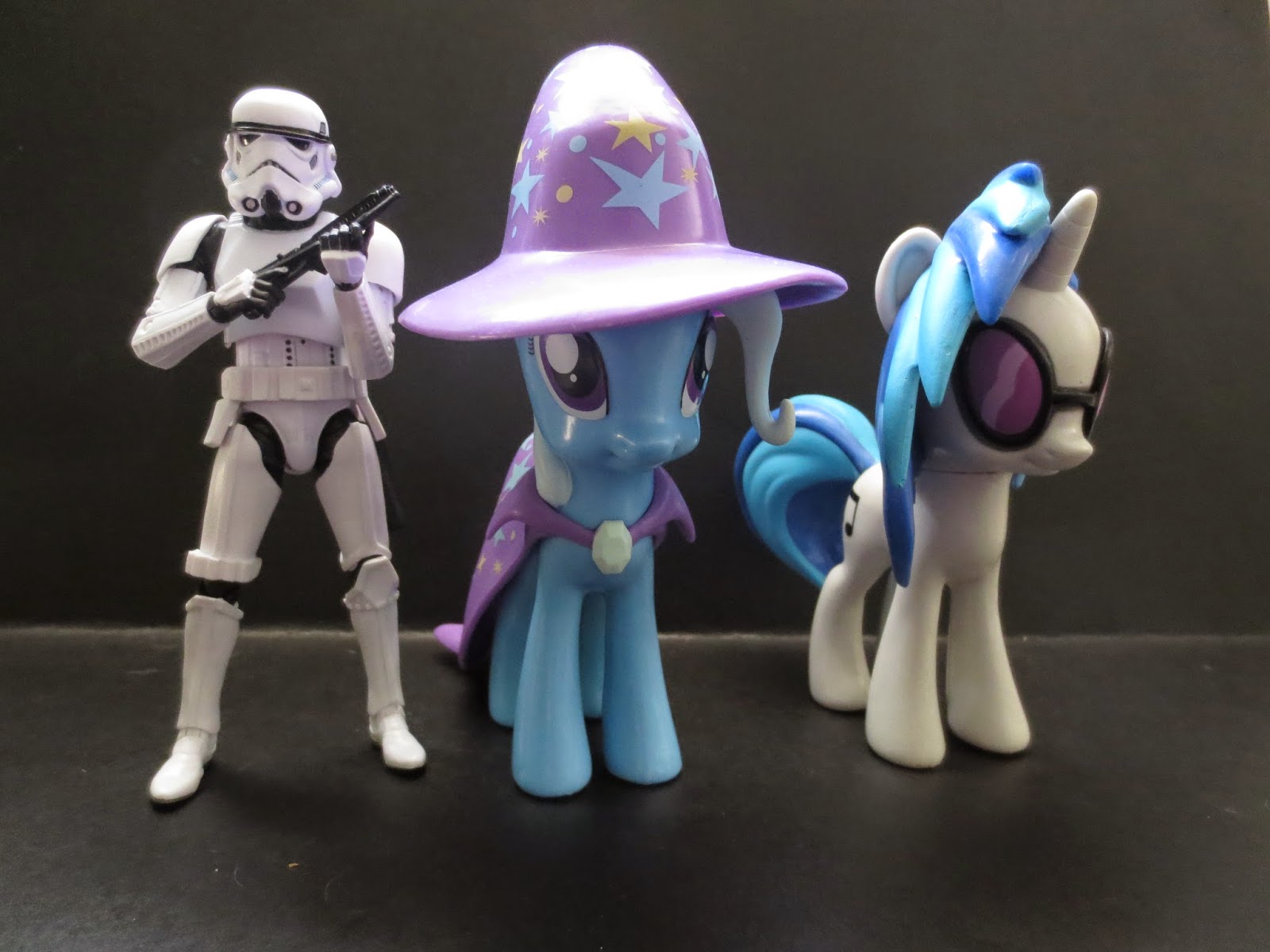 These are solid vinyl figures with no articulation or accessories that, on average, stand 5 inches fall from the bottom of their hooves to the tips of their ears. Trixie looks a little taller simply because she is wearing her wizard's hat (it makes her 6 1/2 inches tall). Unlike many of the Hasbro offerings, Funko has really captured the look of My Little Pony: Friendship is Magic's animated style. Most figures in the line share the same base bodies with the extra features like hair and tails added on, and Trixie is no exception. These are sold in some very attractive window boxes with some unique art for the character on the front. They are very easily removed from and replaced back into their packaging. There is a "Clear Glitter" variant of Trixie Lulamoon that is also available and features the figure molded in a translucent, glittery plastic. 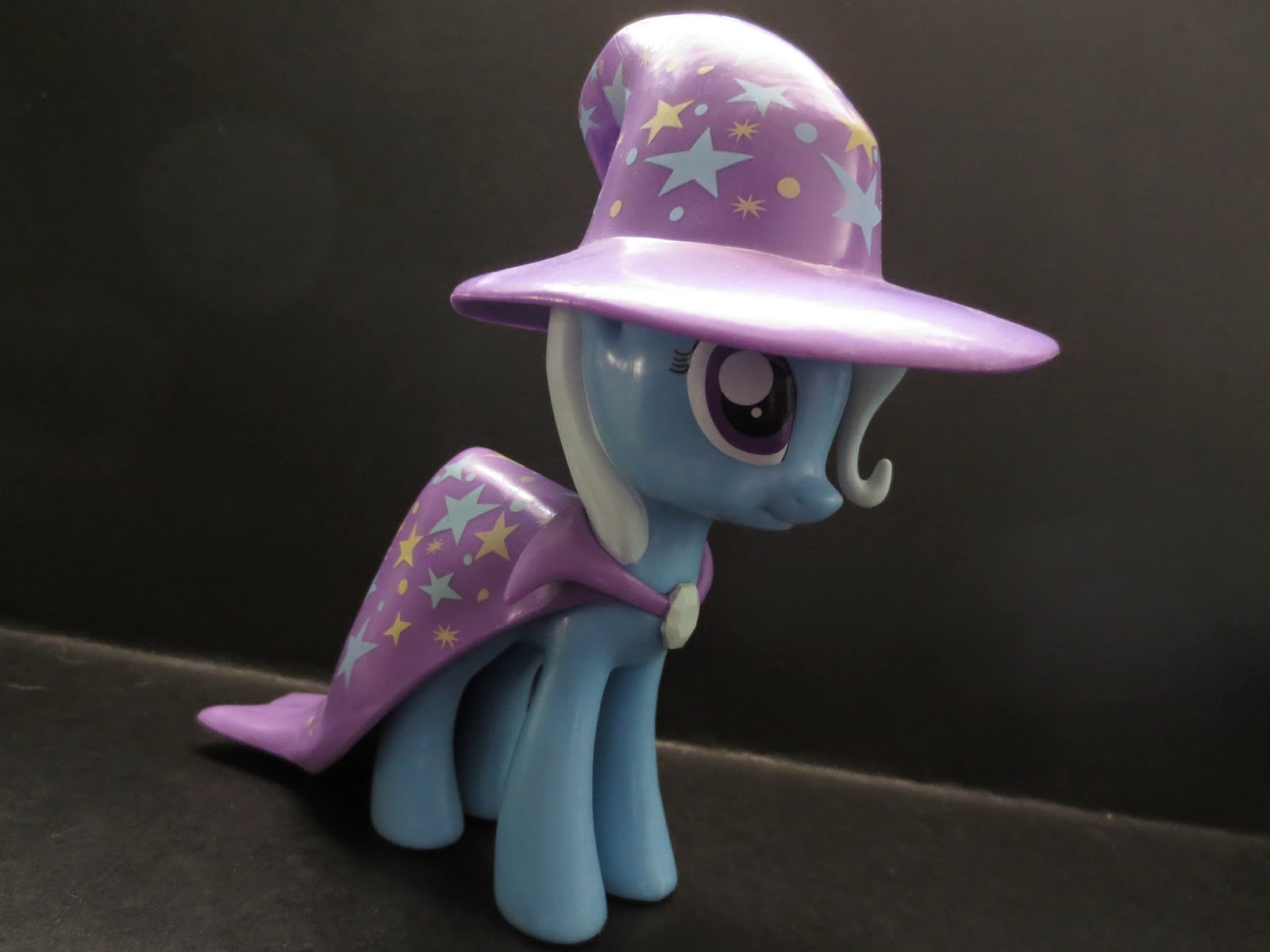 The overall look of Trixie quite nicely captures the look of the character. While I wish that Funko had went with a more unique and expressive look for the character (all of the figures, because of reuse, are just standing and smiling), there is no denying who this is. Trixie stands out on the shelf because of her unique magical garb. Her long, flowing cape and her wizard's hat are separate (but permanently attached pieces) that have been placed over the base body. She has a single strand of hair flowing out from beneath her hat and her mane on the back of her neck, but her tail is missing in action. Yeah, the cape is supposed to cover her tail and their is a raised part of the sculpt that implies her tail is there (the translucent version of this figure clearly shows that the tail and unicorn horn are missing, though). It works, though the cape seems a little too large. Since these are vinyl figures, I should point out that occasionally there are some rough molding lines on them. If you look really closely, you can sometimes see that the base bodies have an uneven texture to them. My Trixie is pretty good overall, but I think this could definitely be something that varies from figure to figure. 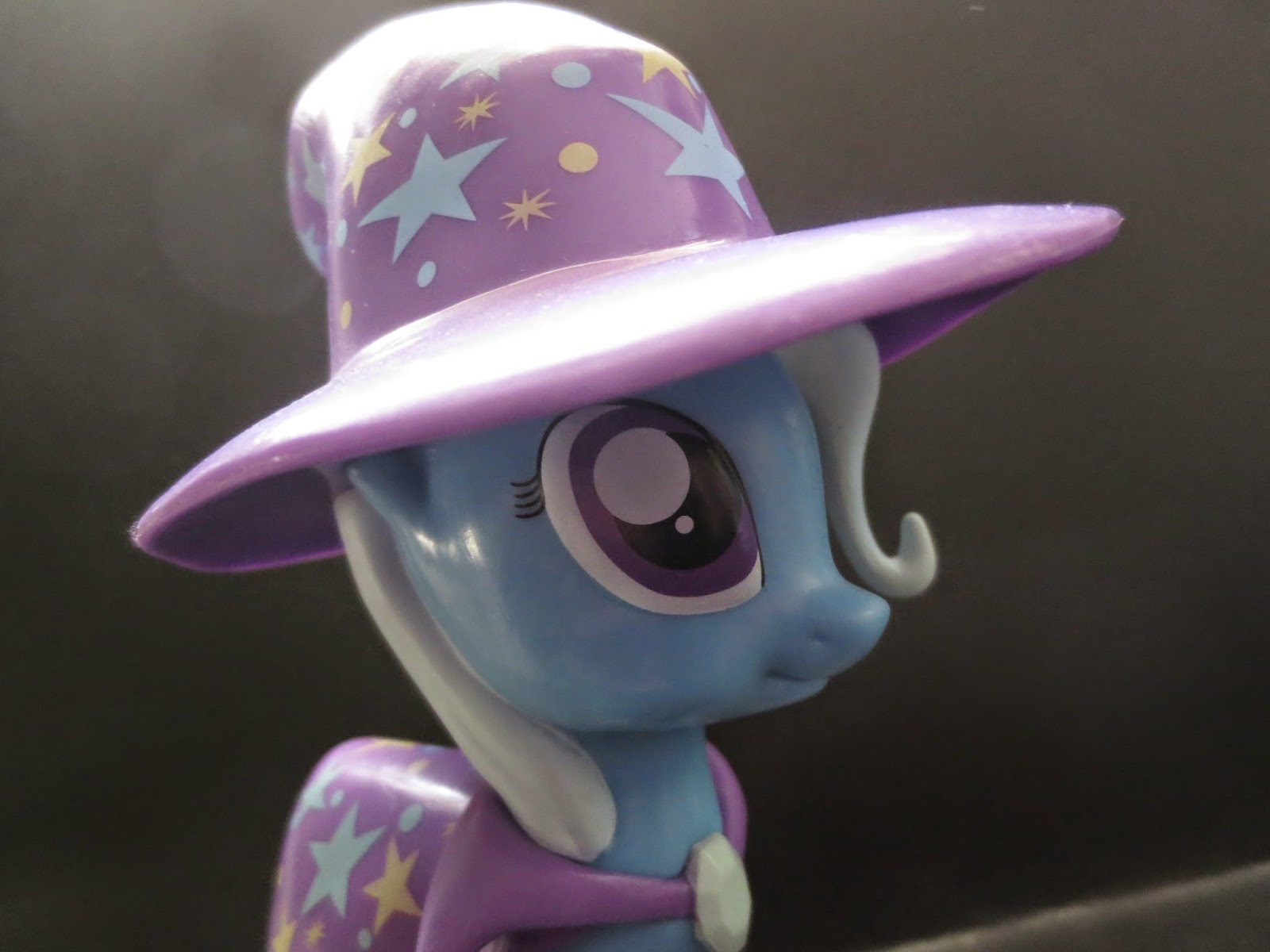 Just like the show on which they are based, these vinyl figures are bright and colorful. Trixie is molded in a light blue plastic while her cape and hat are molded in purple. I love the pattern on her outfit although there are some rough patches where the various stars and orbs look a bit scratched up. One of the areas of this line that I'm not completely sold on are the eyes. Eyes should be unique and expressive, but nearly every pony has eyes that are exactly the same shape and size. Since these use base bodies (and base heads) the eyes are all molded exactly the same and applied via what looks like a tampographic stamp. Trixie's eyes are the right color, but I'd rather see a more sly look for her. There's also a goof: Trixie's animation model doesn't have two points of reflection in her eyes (the white dots), but this figure does. Oops! 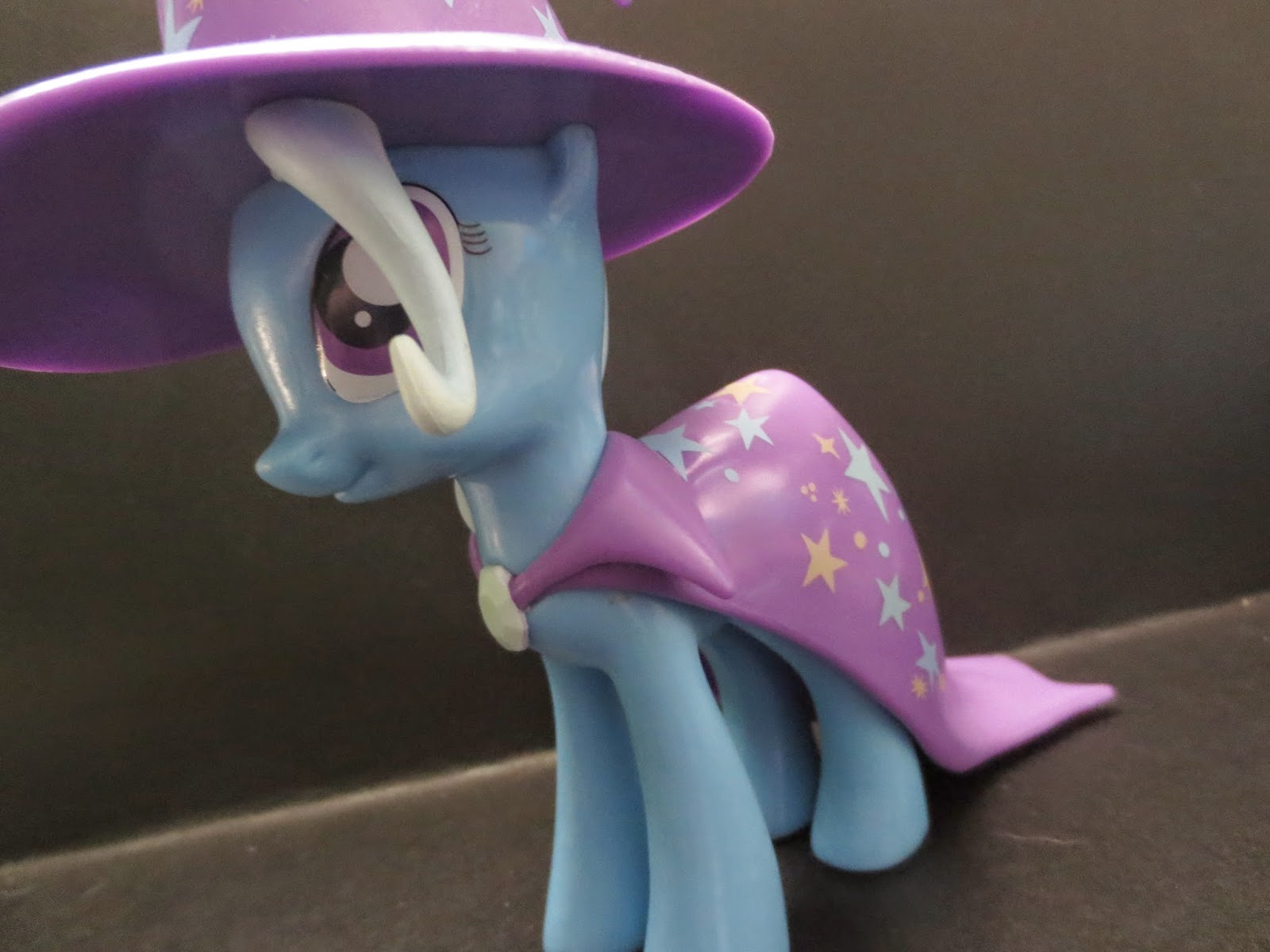 While the paintwork and molding can have a few rough spots, overall I really like Trixie. She's incredibly fun and stands out from the other ponies in the line due to her unique getup. I'm definitely not as hardcore of a brony as some, but I do love the show and for quite some time I've wanted some form of characters from it. I opted to go with Funko's line of vinyl collectibles and I'm not disappointed. I'm not sure how great of toys they would make for kids (I think the packaging says something like ages 5 and up) but they certainly do look really cool when you start amassing a small group of them. They're not everyone's cup of tea, I understand that, but looking at Trixie Lulamoon for what she is, I'm confident in giving her a Good and a 1/2. The lack of a unique expression is probably my biggest problem, but that's an issue that is endemic to the line. Let's end this review on a positive note, however, with a quote from Trixie herself:  "The Great and Powerful Trixie... needs some peanut butter crackers." 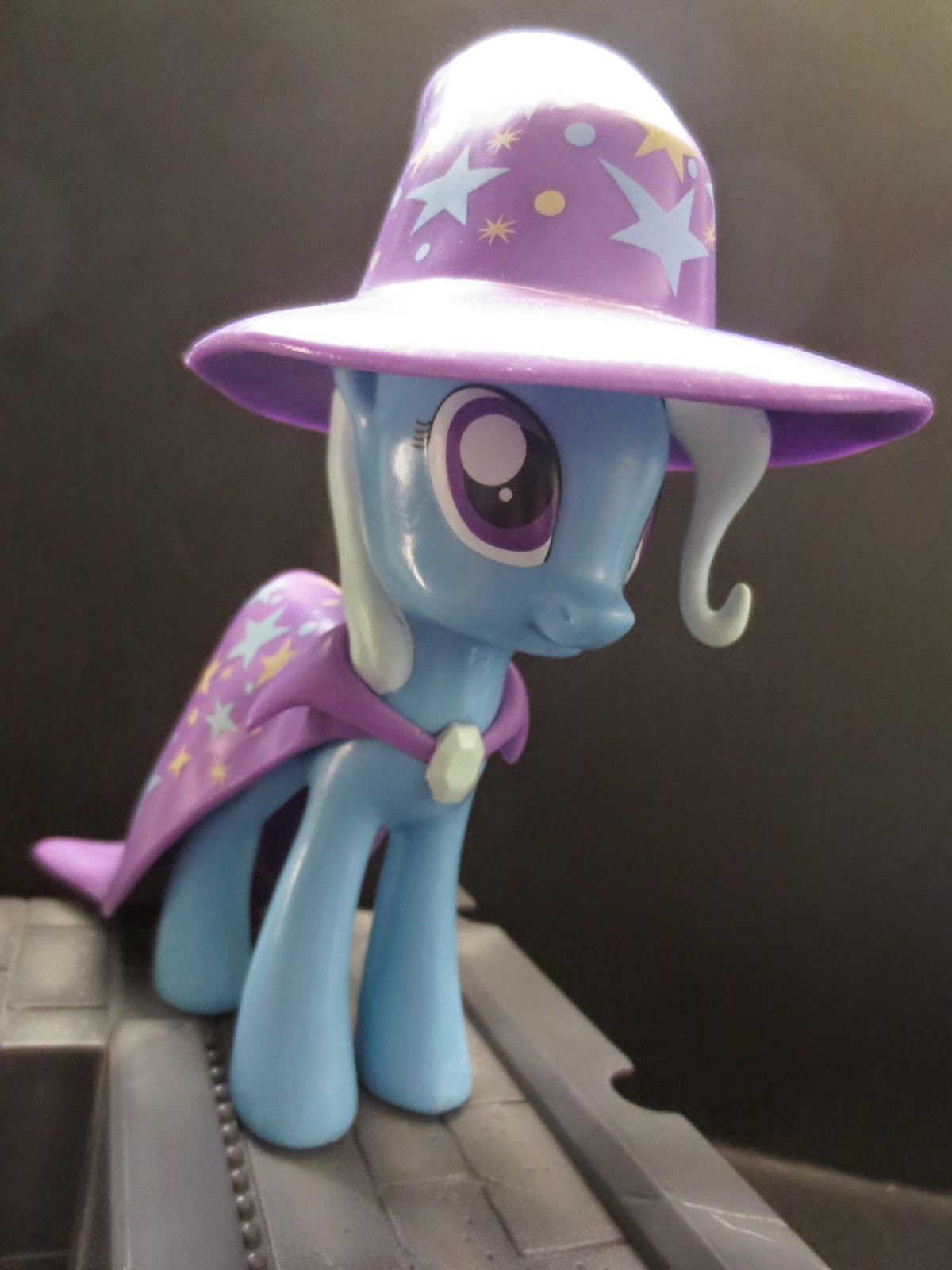