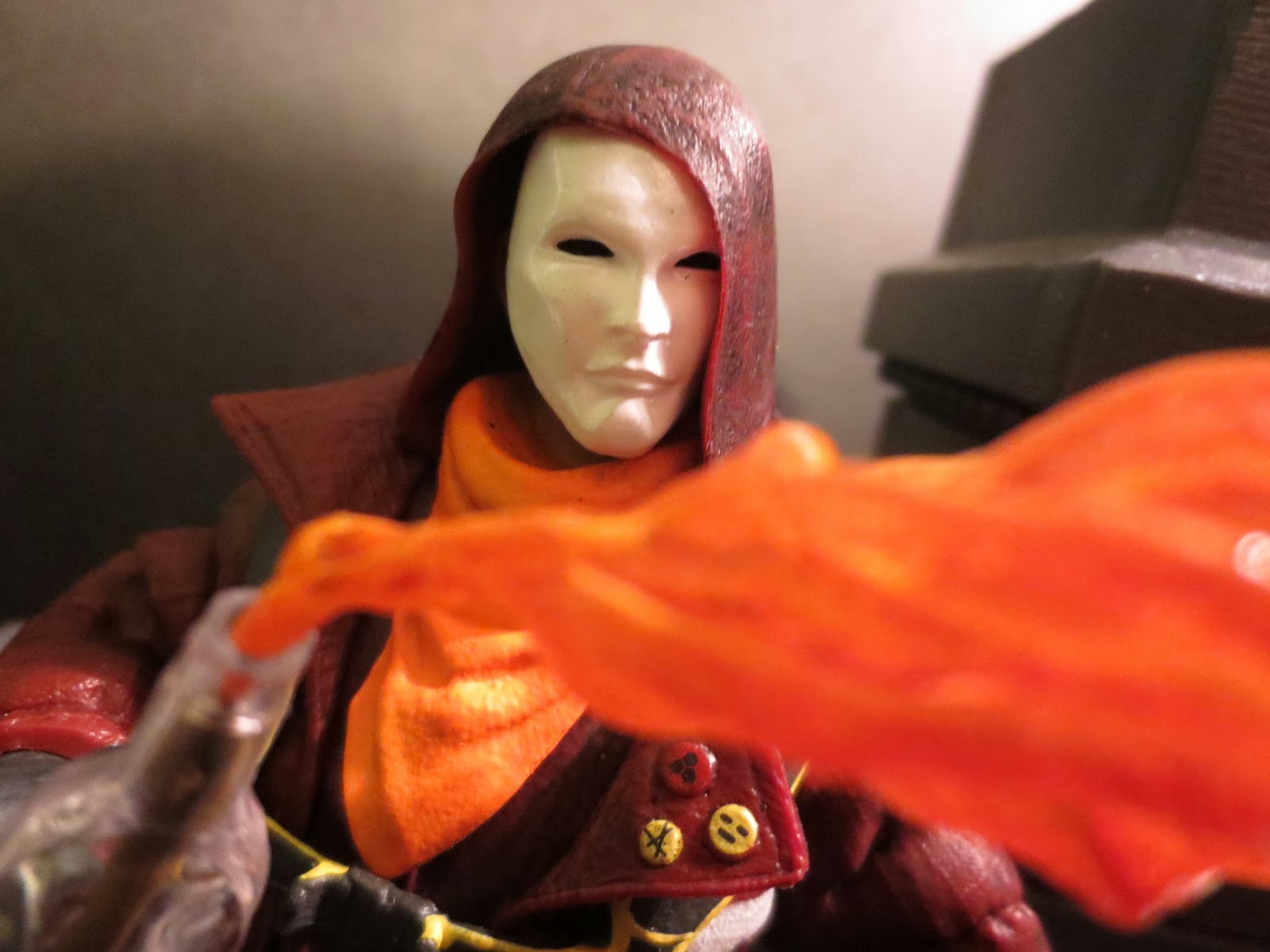 If you want proof that DC Direct/ DC Collectibles' Arkham lines could be the greatest Batman action figure collection ever, just consider this: they've made Anarky. Not only am I impressed by the fantastic Arkham videogame series Arkham Asylum, Arkham City, and Arkham Origins (I'm totally looking forward to the upcoming Arkham Knight- check out the trailer) but I'm impressed by how deep DC Collectibles seems to be going with this line. While the first series for Arkham Origins included mainstays like Joker, Black Mask, and Bane, the second series has some truly interesting characters that don't often get made into toys like Firefly, Deadshot, and Anarky. Anarky has long been one of my favorite characters for Batman to interact with because he's like Bruce Wayne in his passion for justice, but he has totally different ideas about what that means. While he's still a vigilante, Bruce ultimately trusts law and order to solve society's problems; Anarky sees law and order as the cause of those problems. Created by Alan Grant and Norm Breyfogle for Detective Comics #608 in 1989, Anarky is Lonnie Machin, a brilliant teenager who has read a few too many radical manifestos. While Anarky has appeared in far more comics than you would probably expect, he's never been one of Batman's A or B list foes. Due to his appearances in Beware the Batman and Arkham Origins, though, Anarky seems to be moving up in the world a bit. Ready for a look at this mighty cool figure? Then join me after the break... 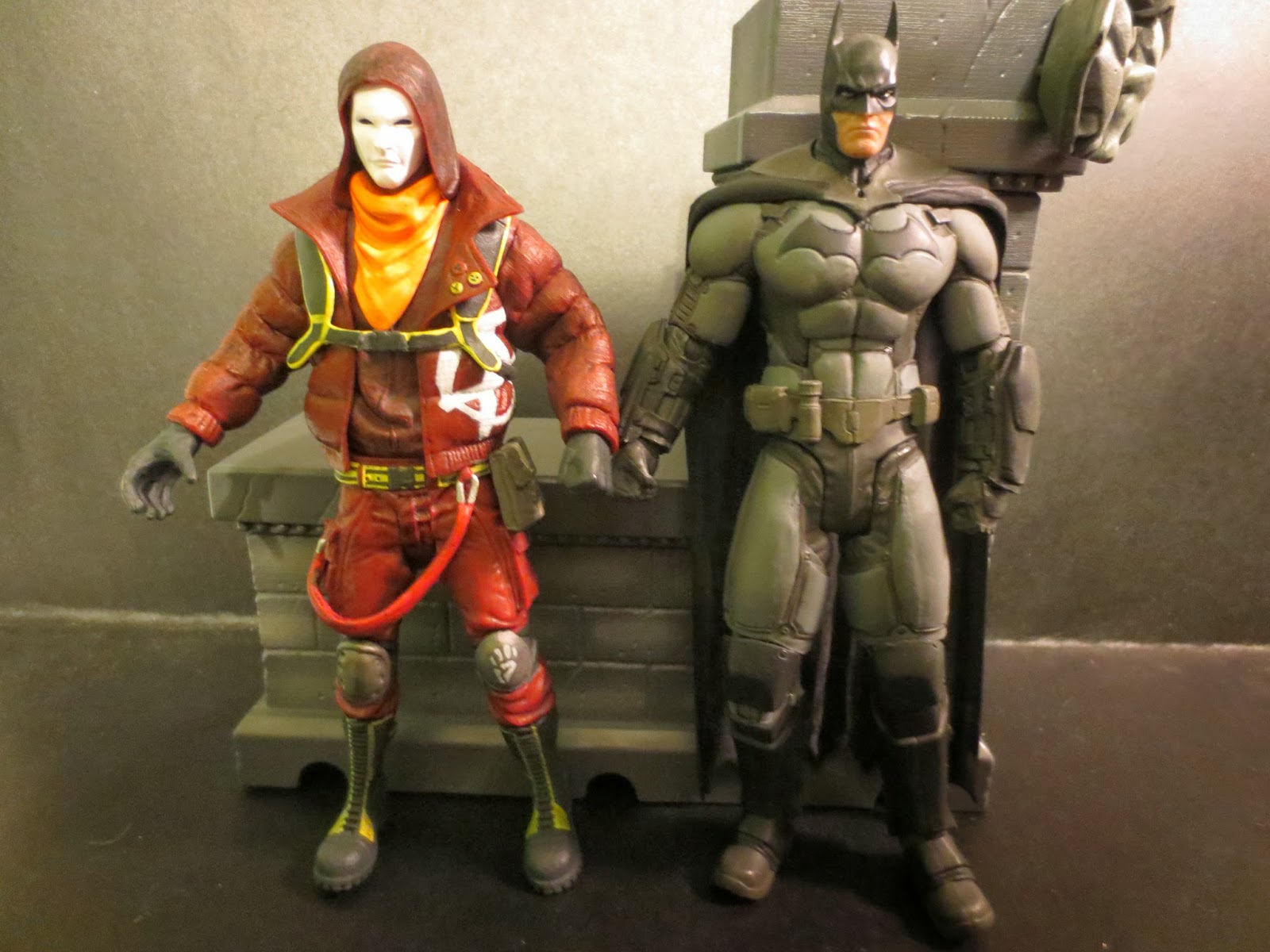 Anarky stands about 6 3/4 inches tall, which makes him a bit shorter than Batman who is closer to 7 inches. That makes sense, though, since Anarky is still a teenager. I really like the look of all of the figures that DC has done for the Arkham games; they have a great look that beautifully replicates the renders of the games while still fitting in fairly nicely with your other DC figures. These figures are maybe a little larger than the current DC Collectibles stuff and a little smaller than the previous Arkham Asylum and Arkham City figures, but not so much so that you'll notice on your shelf when they're displayed. They look great together. They also have really convenient clamshell packaging that has a pull tab that lets you open the package easily while still keeping the figure safe. 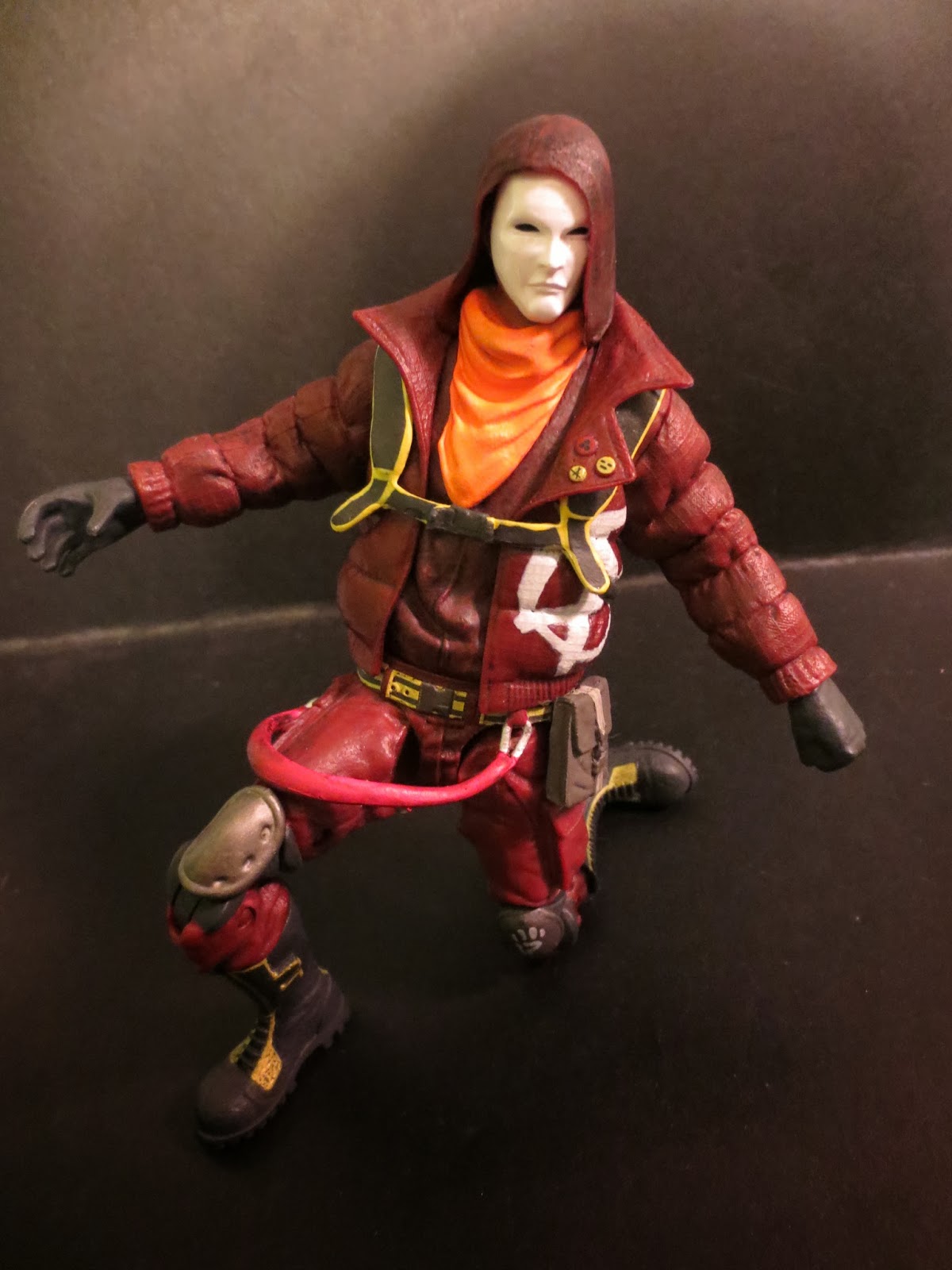 The articulation on these figures is all over the place and while Anarky is not a hyper-articulated toy, he might surprise you. He features: boot swivels, double jointed knees, swivel/hinge hips, a swivel waist, swivel/hinge shoulders, swivel biceps, hinged elbows, swivel wrists, and a ball jointed head. That's a fair amount of articulation but, unfortunately, a lot of it is very restricted. First, the joints are very tight and they use that clear plastic that makes all collectors nervous. The hips would move pretty well, but Anarky's pouch and harness get in the way. If you're not careful, you can tear his harness or knock his pouch off. His arms are quite interesting as they're just clear plastic rods covered by a rubbery material that replicates his puffy jacket sleeves. I like this idea. It's not necessary, but it does add to the look of the figure. His hood is also nice and soft which allows for a wider range of motion for his head. Once again, good articulation in theory but tough to use without damaging the figure or having to force joints, which always makes me nervous. 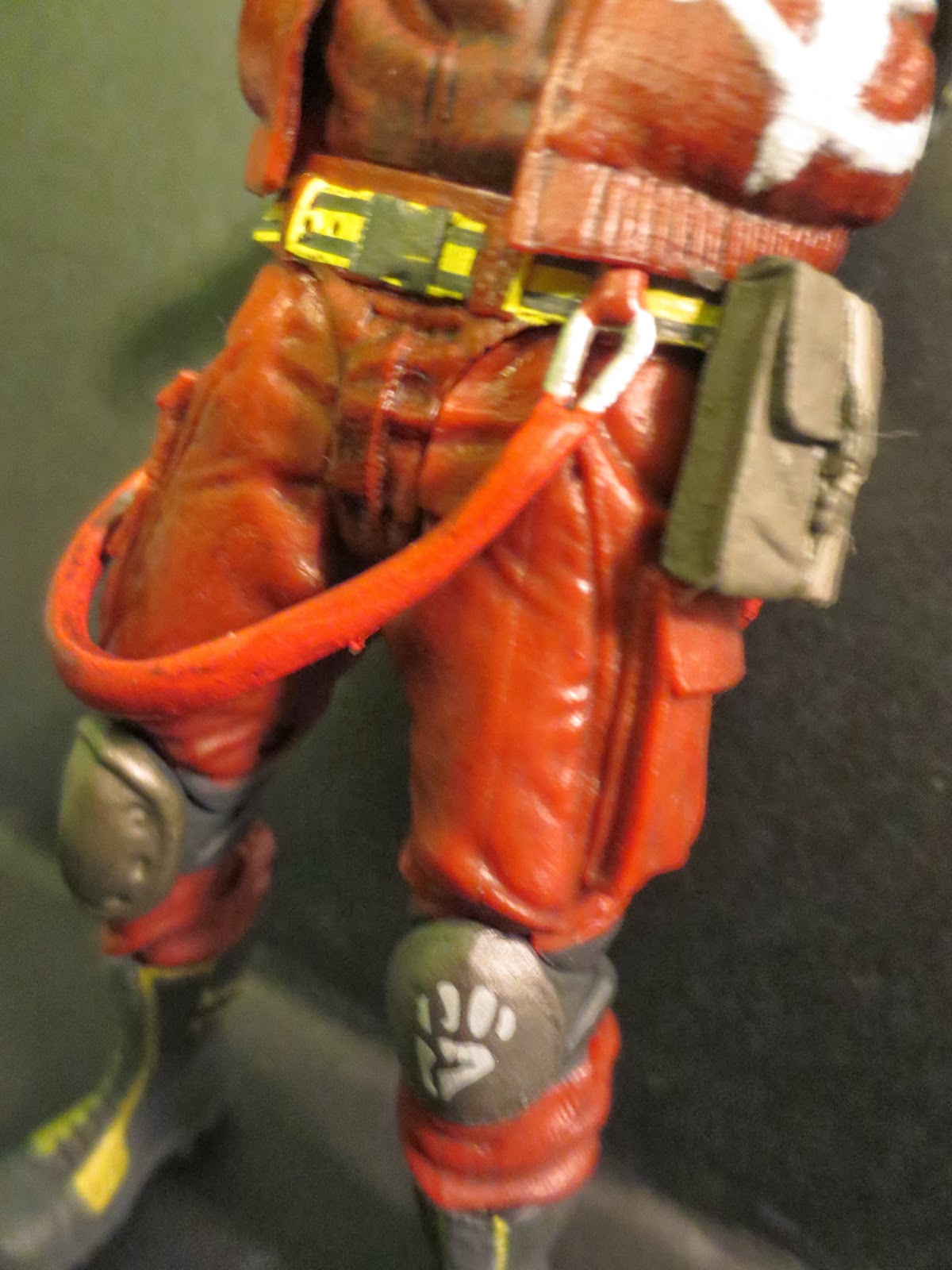 Even if Anarky doesn't move like he should, there's no doubt that he looks fantastic. I love his redesign in Arkham Origins; he looks less like V from V for Vendetta and more like a member of anonymous mixed with a freeclimber or urban explorer. His boot are very heavy duty, but also stylish with visible straps on the sides. He's wearing some excellent cargo pants tucked into the boots with lots of well sculpted folds and wrinkles. I love his kneepads, particularly the fact that they don't match. This is definitely the work of someone with a limited budget. His belt is nice and has a little sculpted pouch on the side, but my favorite detail is the support harness hanging around his waist and thighs. This seems like a pretty cool tool for Anarky to have. Since he doesn't have superpowers or anything, he's gotta have a way to keep safe when he's navigating the Gotham skyline. 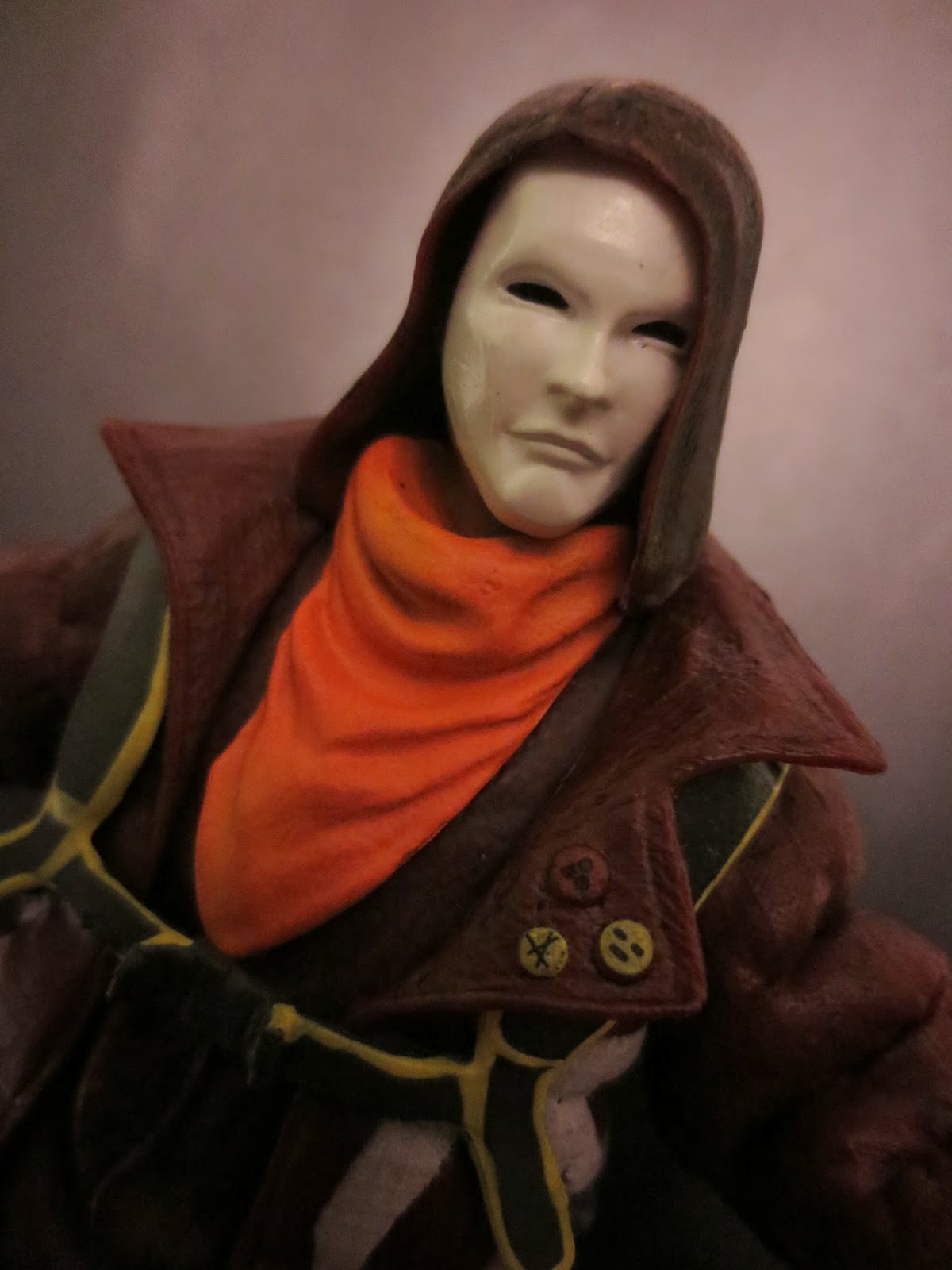 His jacket is big and poofy with very cool sleeves. He's got a few little pins on his left lapel and you can see that he's wearing a hoodie underneath. The backpack he's wearing is sculpted onto his body and features little studs, safety pens, and actual rubber straps for the arm and sternum straps. He's got a soft hood that his head moves freely within. He's wearing a blank white mask to conceal his identity. Look under his hood and you can see his ears and shaved head; how cool is that? 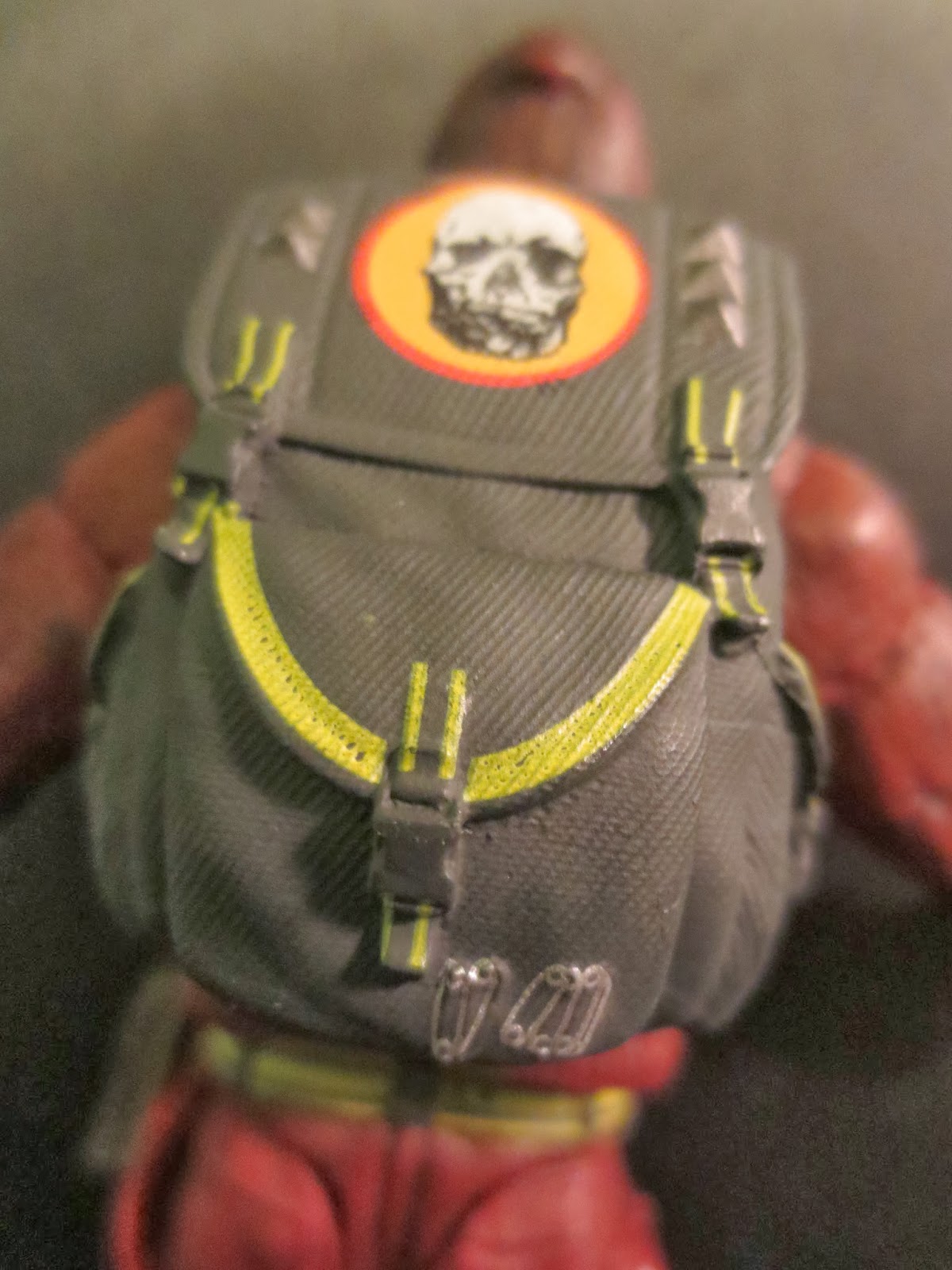 The paint work is pretty awesome, too. There is a lot of detail on this guy and so while some places might be a bit rough, nothing is forgotten. Anarky has a great dark red color scheme that is highlighted by his gray and yellow backpack, boots, and belt. I really like some of his self applied details such as the fist stenciled on his left kneepad, the anarchy "A" on the left side of his jacket, and the skull patch on his backpack. It adds a personality and definitely captures the teenage angst of the character. There are a few rough spots such as paint chipping off of the safety harness, but the paint wash and all the minor details just capture so well the gritty, grimy look of the Arkham games. 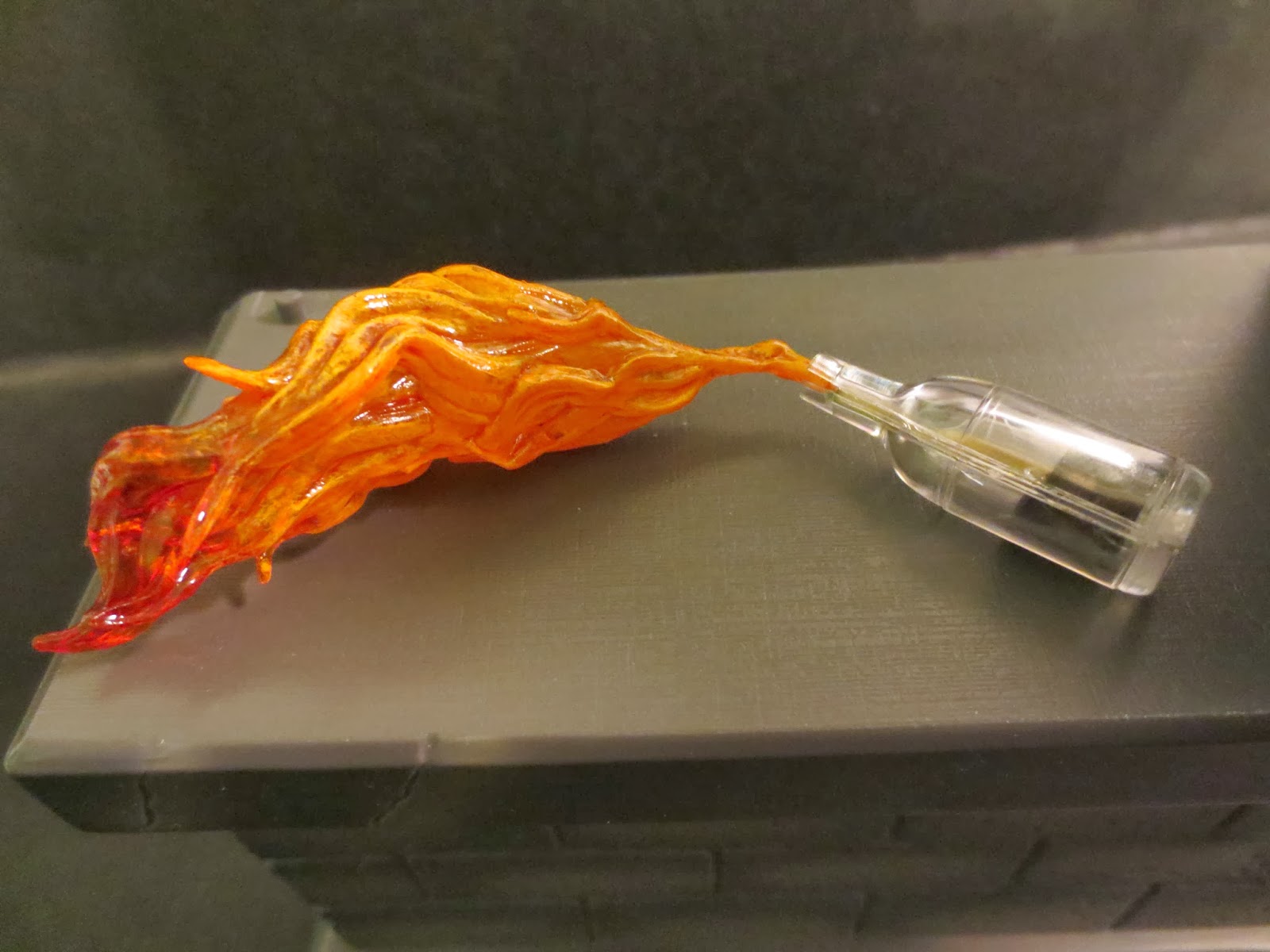 Anarky only comes with one accessory, but it's hands down one of the coolest I've ever seen: a Molotov cocktail. This is a huge accessory and looks to be pretty intricately designed. The clear bottle looks like a larger liquor bottle and appears to have a solid base resembling the devices fuel mixture, a tube for the wick (perhaps newspaper or something?), and a massive flame spewing out of the top of the bottle. Obviously at this point Anarky would want to throw this thing as quickly as possible, but it looks amazingly cool on display when cupped in his right hand. The flame is molded in a translucent orange plastic with a dusting of orange drybrushing on it to give it a great, realistic looks. Quality often triumphs over quantity, and this is definitely one of those times. 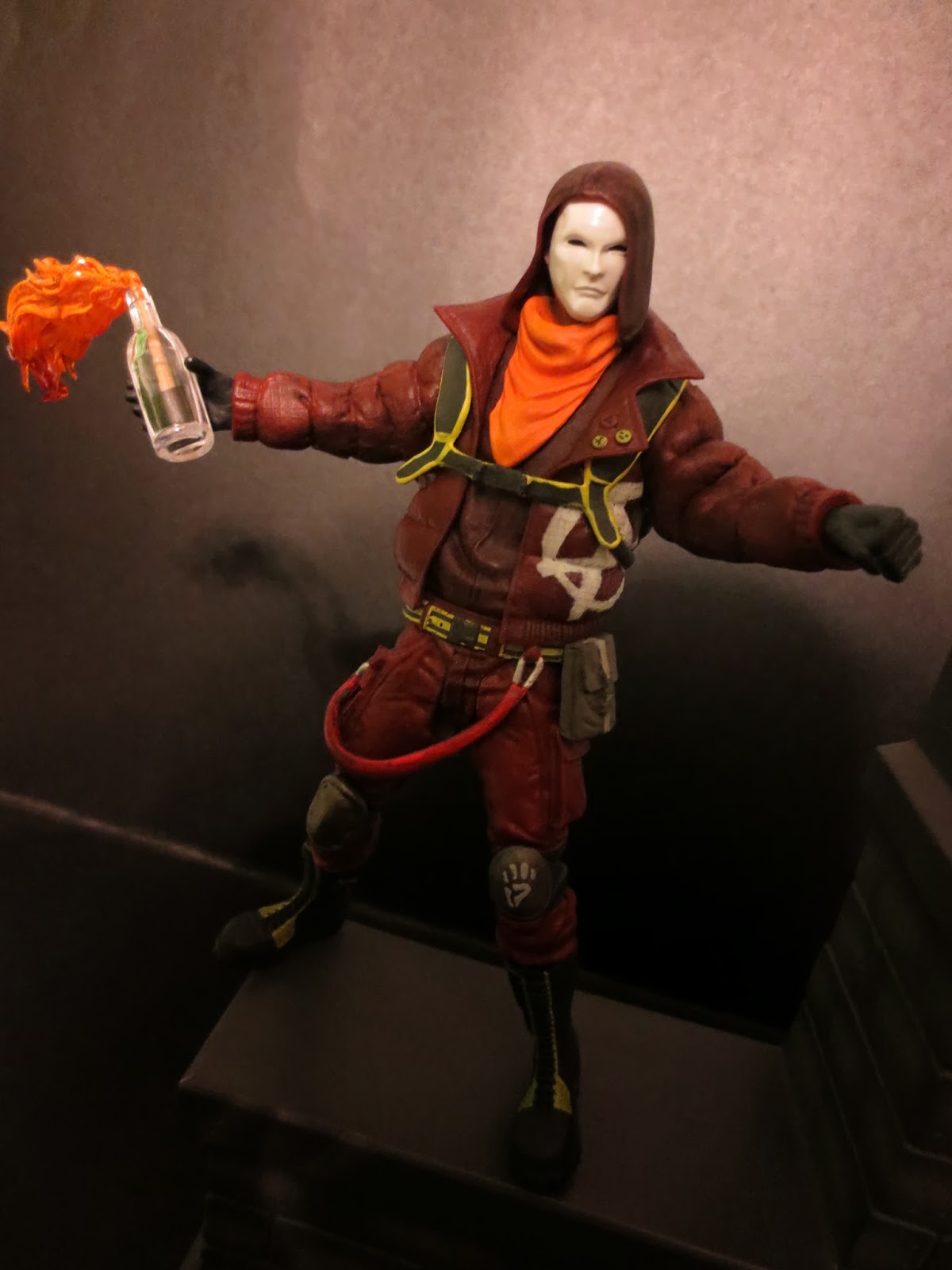 While I do admit that Anarky's articulation concerns me a bit (and is a bit tough to move) I cannot at all knock how awesome this guy is. The Arkham Origins figures seem to be designed quite differently from DC Collectibles' current New 52 inspired lines to be more display pieces rather than pure action figures. Since I'm primarily displaying these and photographing them, I'm OK with that. Anarky has an amazingly detailed and well painted sculpt (I mean, check out the little safety pins on his backpack. Tiny safety pens!), some functional articulation, and one of the coolest accessories I have seen in a long time. He's a great addition to any Batman collection in this scale and is definitely a character you're probably not likely to see again for awhile unless he somehow manages to get a few more major media appearances. Who knows? Maybe the next time we get a Batman film series, we'll see Anarky appear as one of the primary antagonists? I'm giving this guy a Great rating overall. 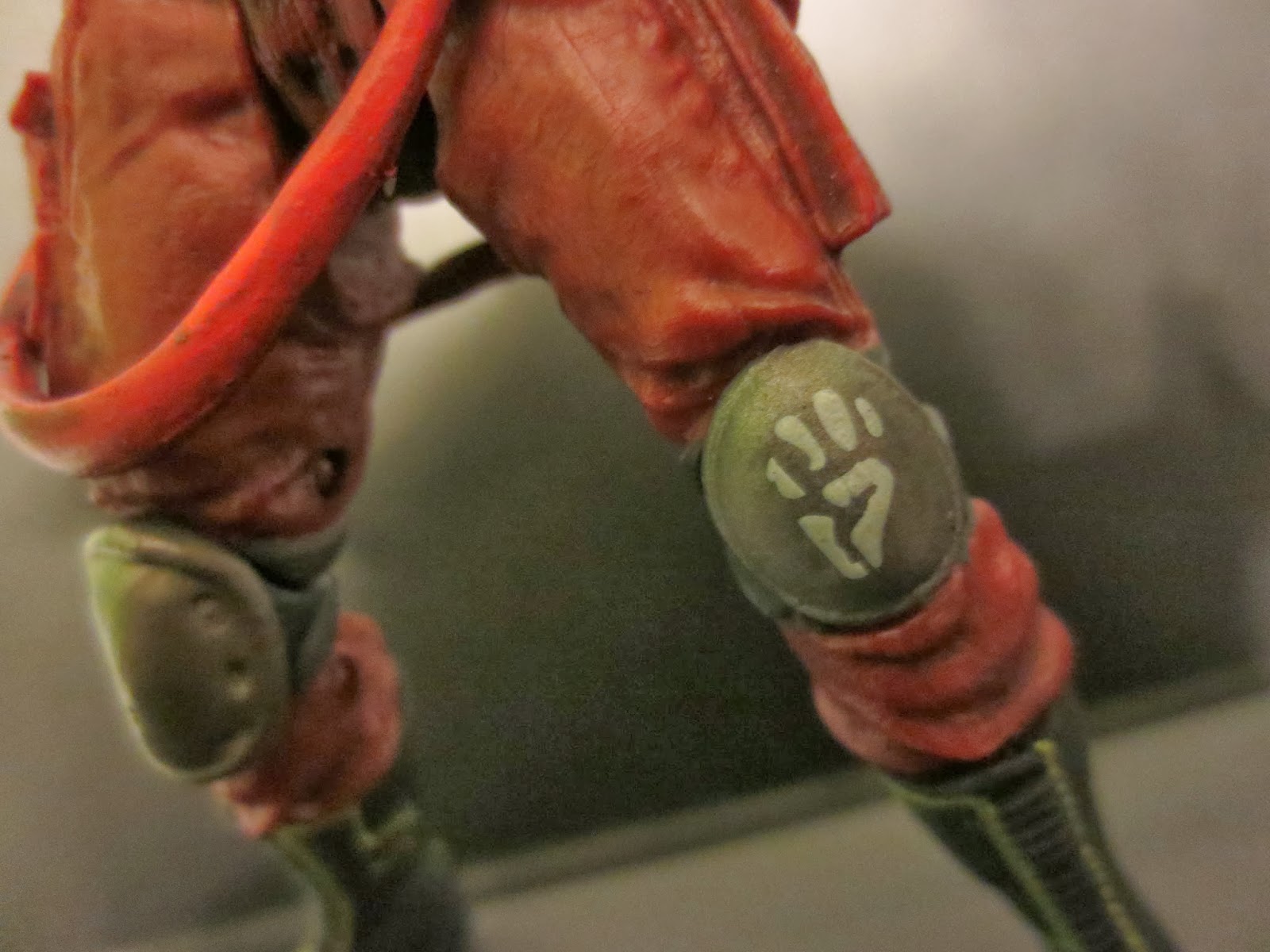