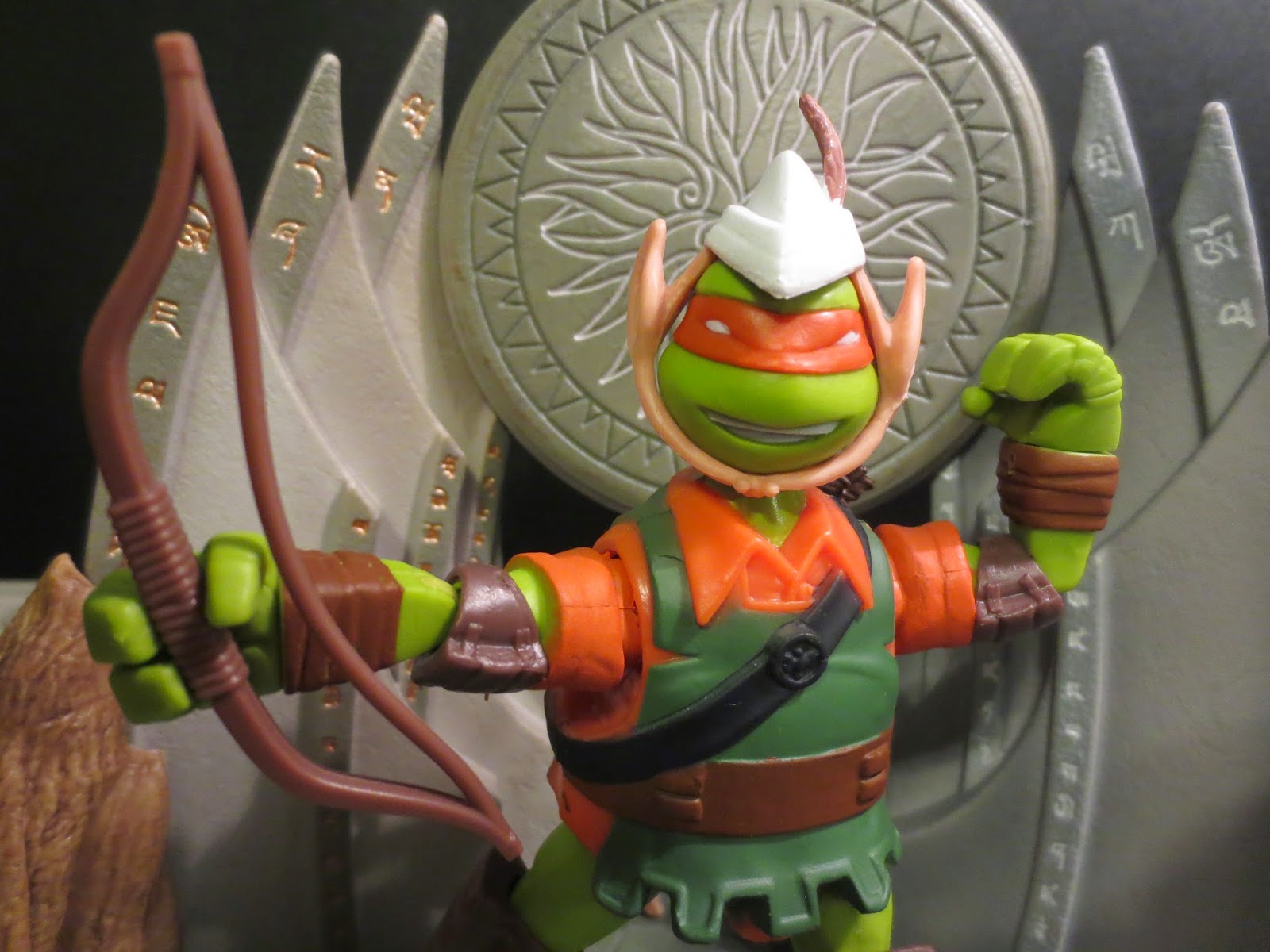 While I've been filling my time with tons of Halloween festivities, candy, and scary toys, I've also been engaged in something else lately: Dungeons and Dragons. Yup, our group has finally gotten back together to play the new 5th Edition of D&D and so far we're loving it. I'm having a great time DM'ing so far and I'm just itching for our next session! All of that is simply to say that today's review of Mikey the Elf definitely was released at a great time. Based on the second season episode "Mazes and Mutants" (which I haven't seen because the DVD hasn't been released yet) Mikey the Elf represents Michelangelo dressed as an elvish archer. Ready for a look at a LARPing turtle? Then join me after the break... 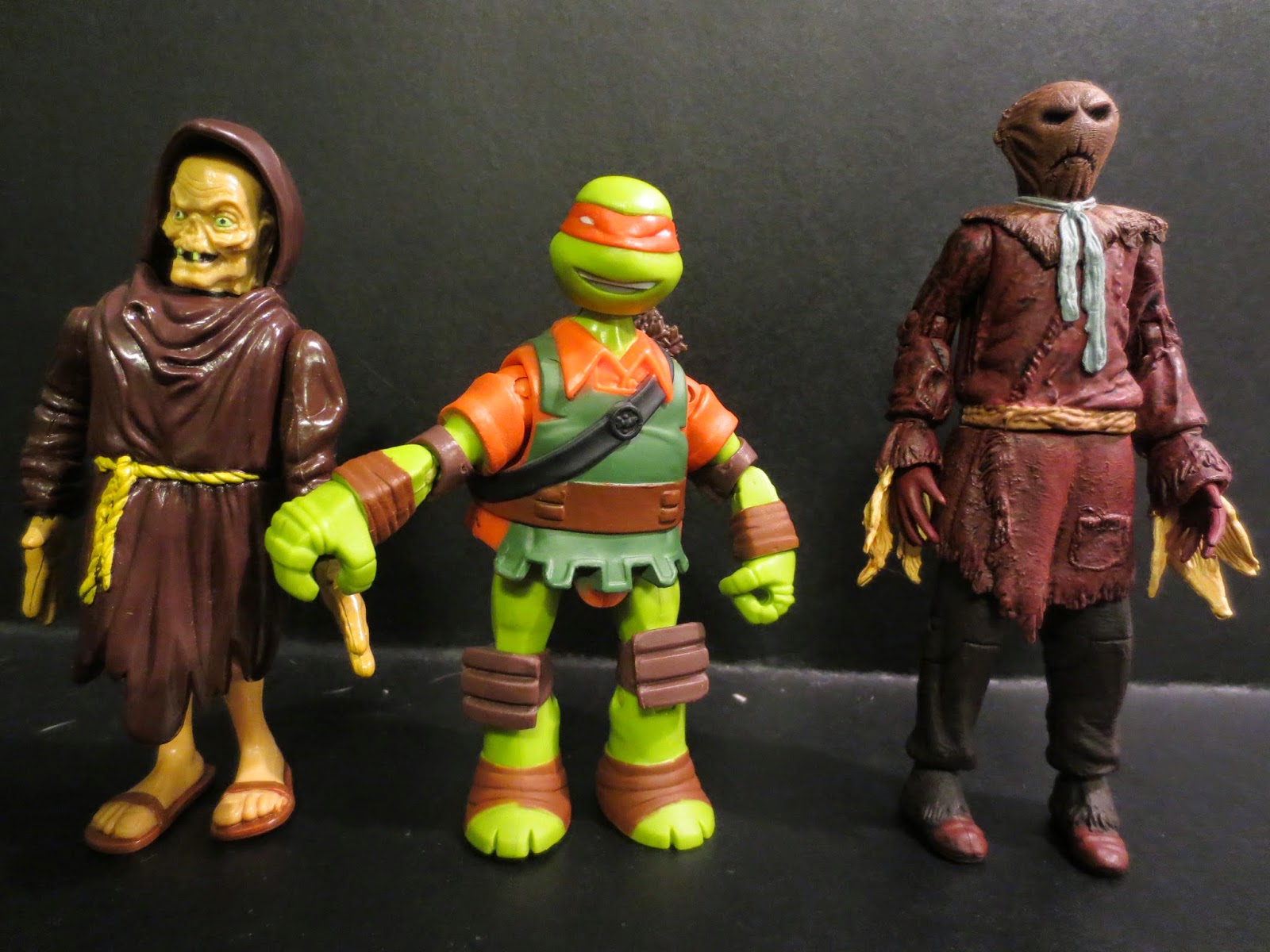 Like most of the TMNT figures released for the Nickelodeon line over the past year and a half, Michelangelo features a more animated appearance based on his cartoon look. That means smoother skin, more squared fingers and toes, and a simpler, more rounded head. Mikey stands a little over 4 1/2 inches tall and fits in well with the rest of the modern toyline. 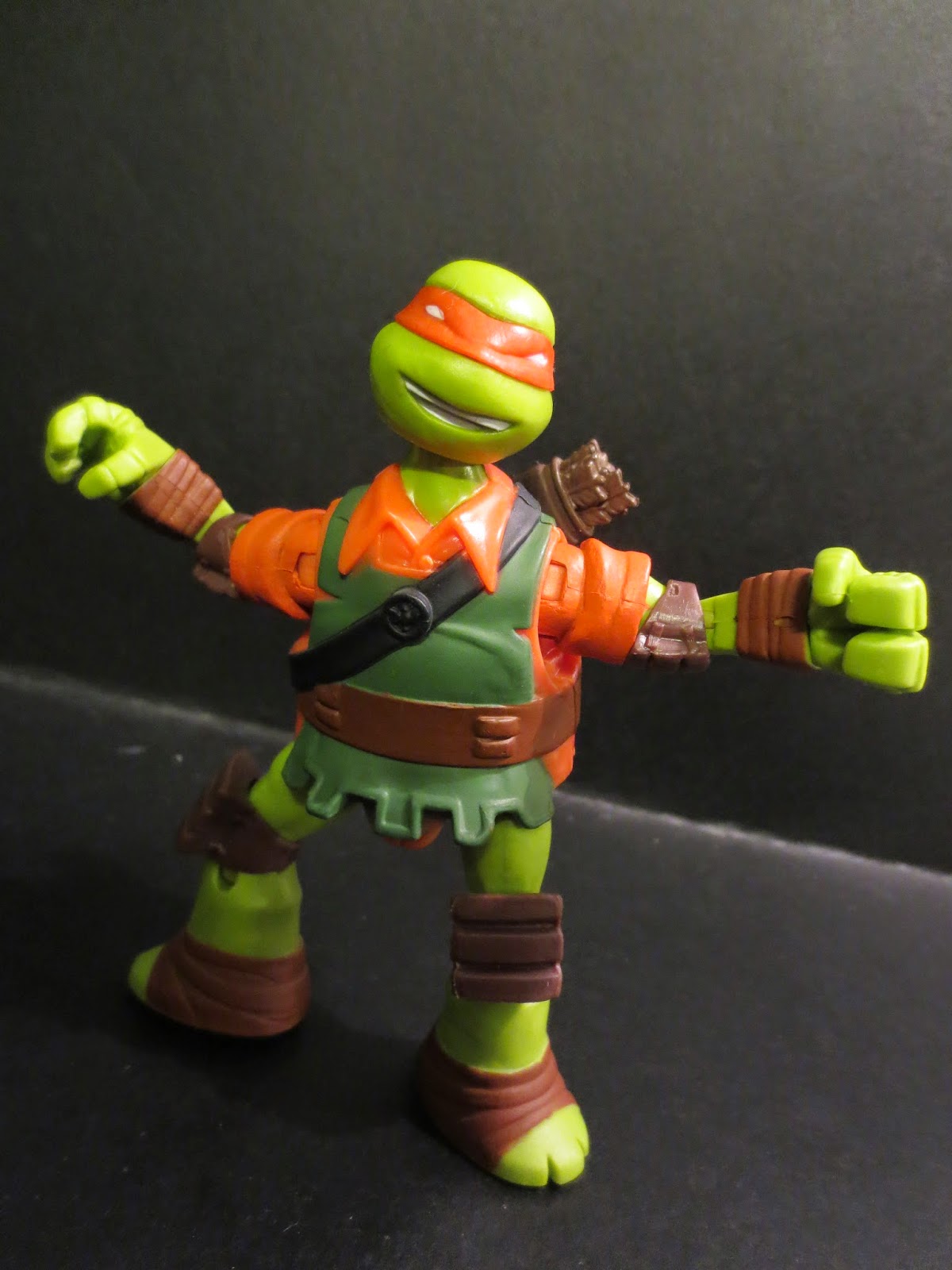 While his bulky body might inhibit his movement, Mikey is still loaded with plenty of articulation. He features: Swivel/ hinge knees, swivel/hinge thighs, swivel/hinge shoulders, swivel/hinge elbows, swivel wrists, and a ball jointed head. While his bow doesn't offer much, Mikey's body can take a few fun archery poses. Not real, authentic archery poses, though, but definitely LARP-worthy ones. I like how his ball jointed head offers a nice degree of movement. Some of the figures are rather limited, but Michelangelo's head movement can be rather expressive. 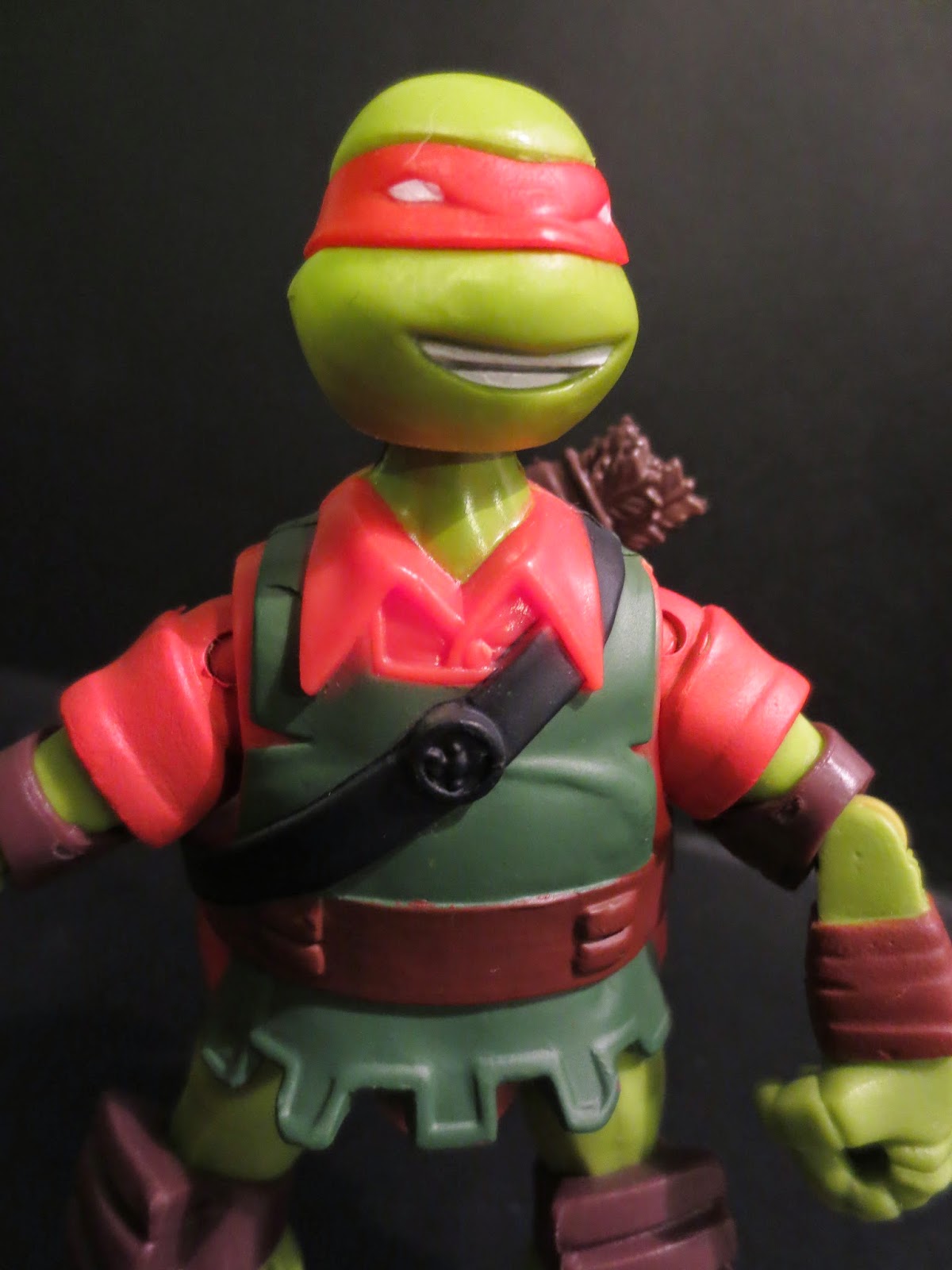 While the TMNT line sometimes features some simple sculpts, they still manage to put in some neat details. I particularly like how this line emphasizes that the turtles are wearing homemade costumes and not actual medieval combat gear. Of course he's wearing his standard knee, elbow, ankle, and wrist pads, but Mikey is also decked out in a orange shirt with a leather looking tunic over top. The shirt is peaking out from beneath the jerkin and has a visible button, collar, and rolled sleeves. The jerkin features a slightly detailed hem with some frayed edges, hinting at the fact that Mikey probably made this out of something found in the sewer. Across his chest and back is a non removable quiver held on by a belt. The quiver has a mass of arrows as part of the sculpt. 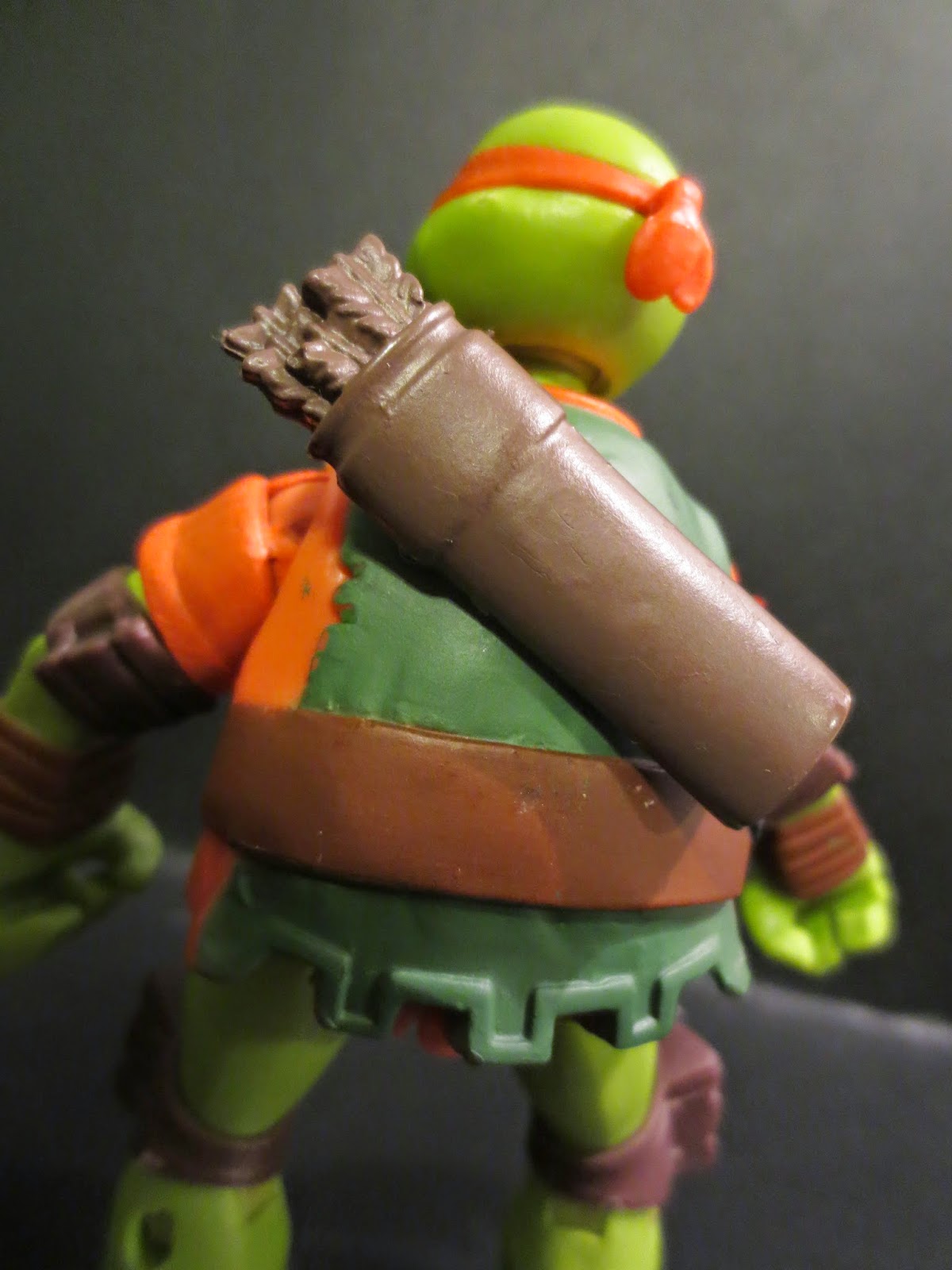 I feel like the paint is an area where I often have less than kind things to say about the figures in this line. Overall, Mikey looks pretty good. He's fairly colorful with brown painted pads, a bright orange for his shirt, and a deeper green for his jerkin. Some of the lines are a little fuzzy with some paint slop, but overall it is nothing more than you would expect from a mass market toy aimed at kids. The detail that really grinds my gears, however, is the fact that the shell peaking out on the back and the plastron peaking out on the front is left orange, like Mikey's shirt. On a turtle, I would imagine making sure that the shell was the right color would be an important detail. It's a small detail, but one that just bugs me. I really wish Playmates would have just sculpted the jerkin or shirt in such a way as to leave off those details. Also, what is with the Mikey figures never having freckles? Freckles are kind of Mikey's definitive feature in the new cartoon in the same way that Raph has the cracked shell and Donatello has a gap in his teeth. 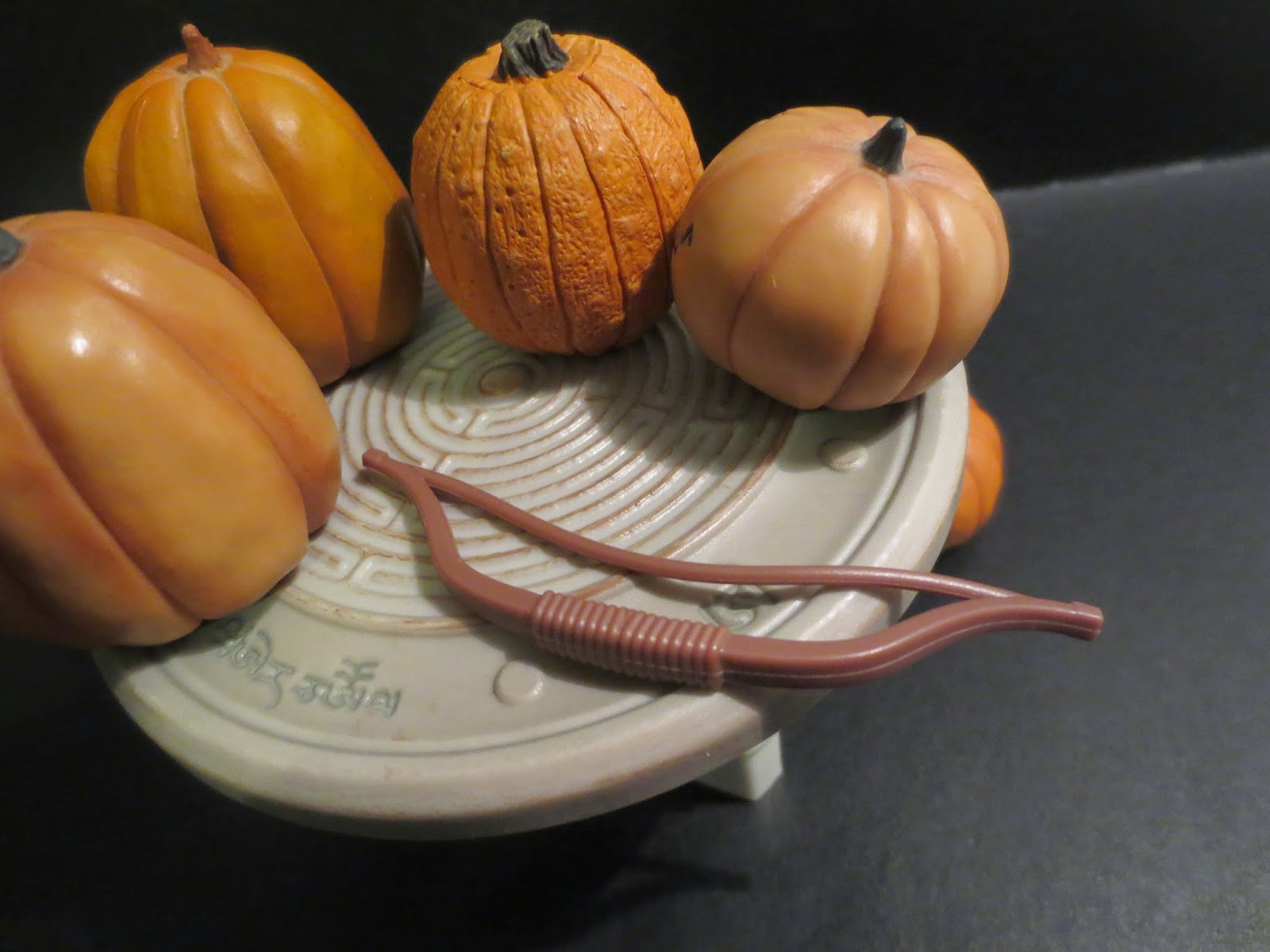 Mikey comes with two accessories: His bow and elf disguise. The bow is a rather simple short bow with the only detail being on the grip. I wish an arrow had been molded into the bow, but still this is a fun, simple accessory. I think it is also the first bow we've gotten in the new TMNT line (remember how the vintage Splinter came with a bow and arrow? That was awesome!). 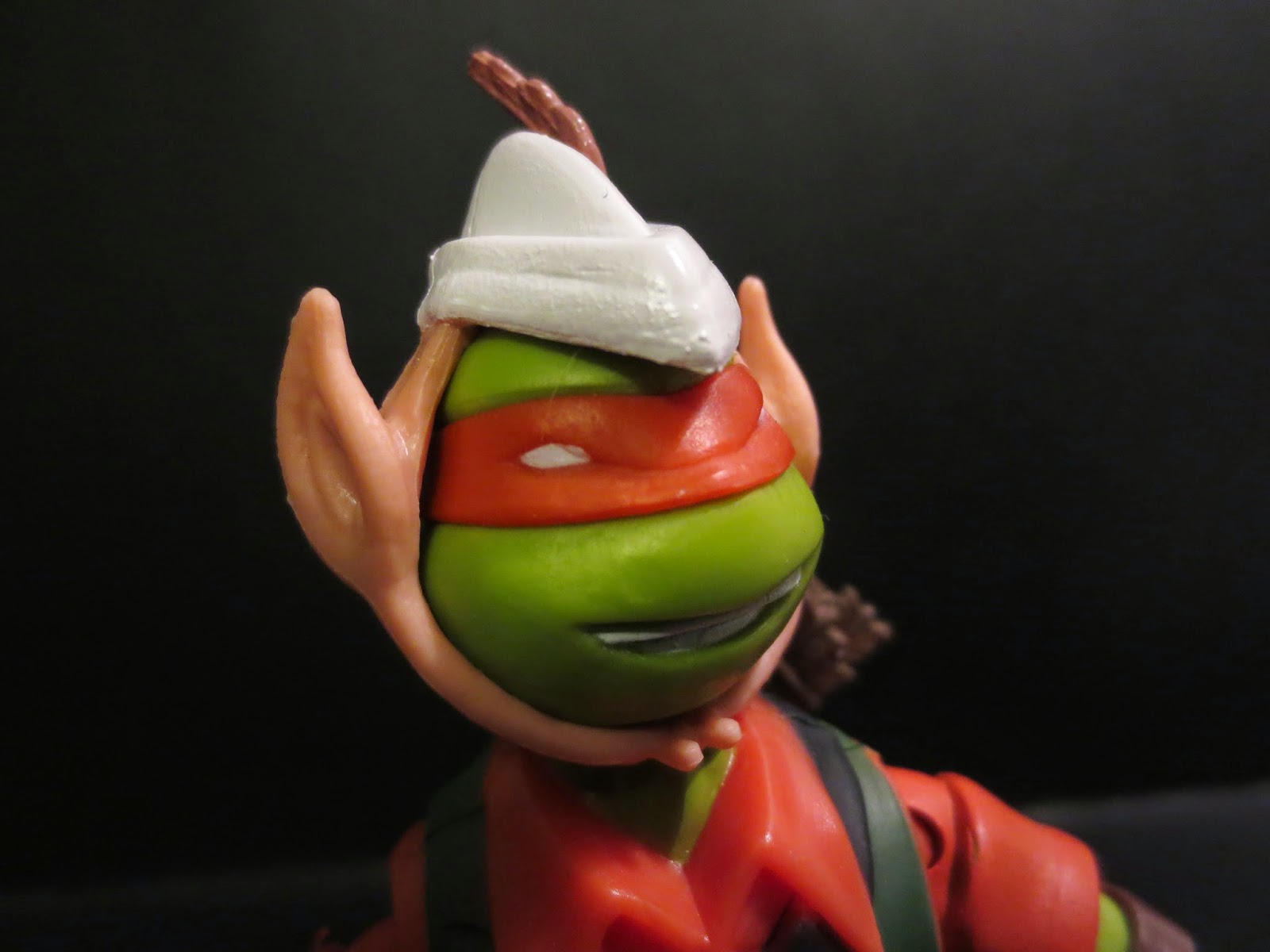 The elf disguise, however, is a really fun accessory. It's a simple white hat with attached elf ears that fits around Mikey's head. There's even a feather in the cap. It looks cobbled together and really works well with the figure; definitely an accessory that represents the unique and wacky stuff that TMNT can get away with. 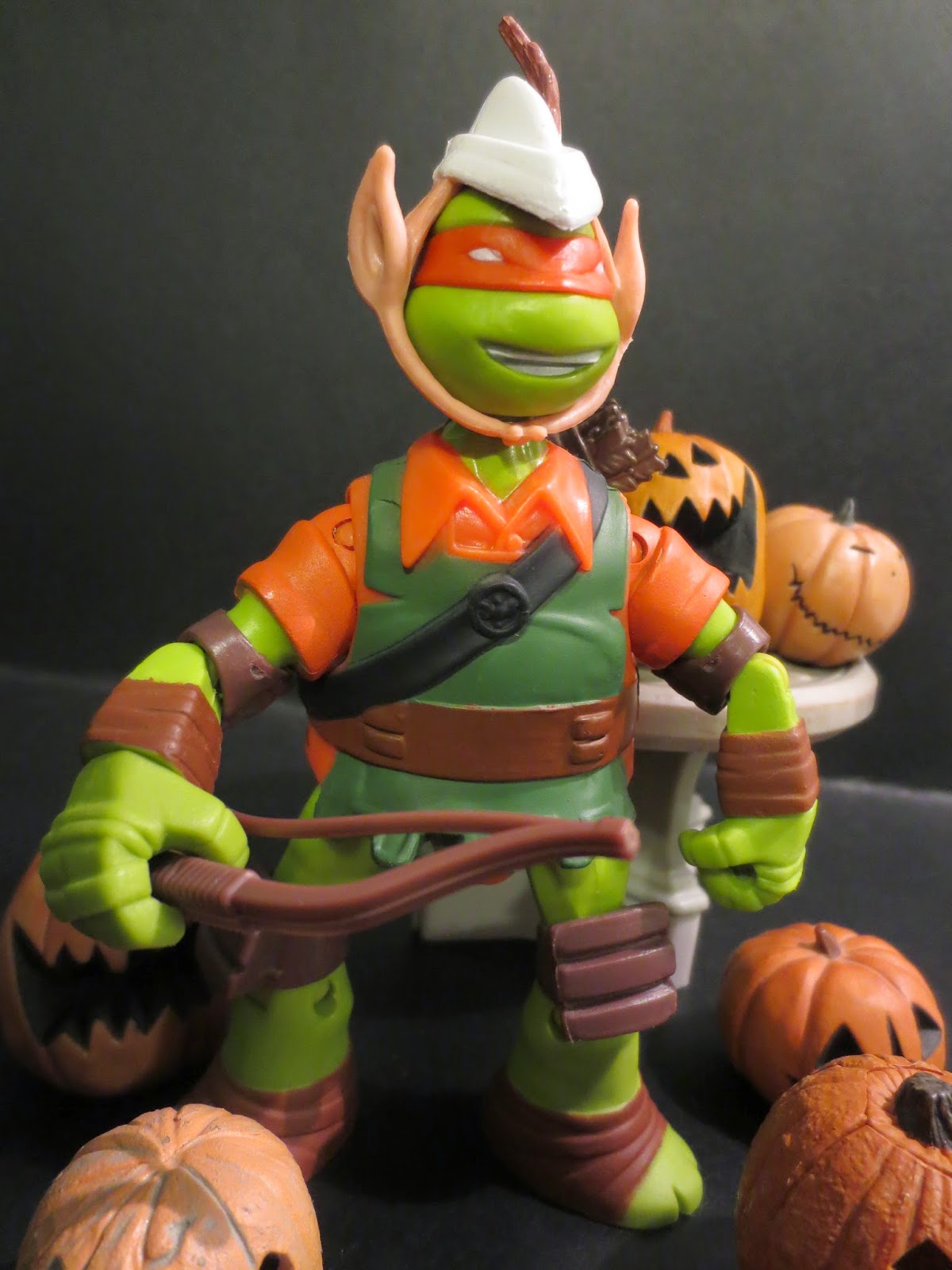 Honestly, I think my only real complaint with this figure is the missing paint apps on Michelangelo's shell and plastron. Overall, I love this guy! He's funny, unique, and a rather good toy. While I'm harsh on Playmates about TMNT from time to time, I think it's because I realize how epic this amazing line could be. Think about all of the great things that Playmates does that other toy companies don't seem to want to do or are able to do: Playmates releases a great mixture of heroes and villains. They release vehicles and playsets at a variety of price points. They keep their stock available and manage to include both new releases and previously released characters in their case assortments. They also exercise restraint in releasing Turtle variants, something that is much appreciated. It'd be way too easy to release nothing but turtles in this line, but Playmates works to make each new release of the boys in green feel like something new is being brought to the table. Mikey is a great toy, so I'm giving him a Great rating! I'm now just waiting for him to say "Elf needs pizza!" 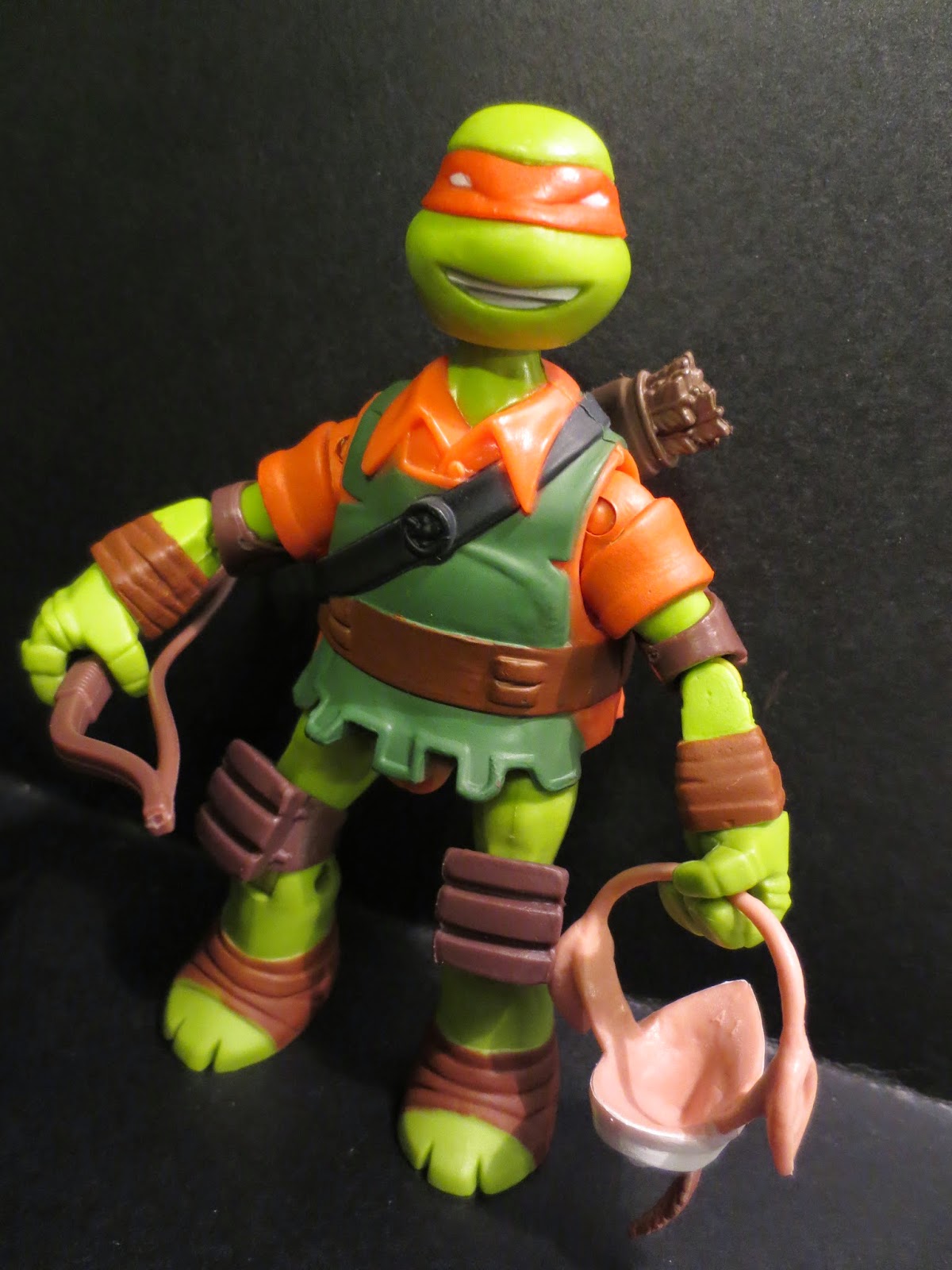