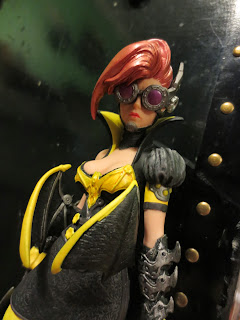 While I prefer Kotobukiya's Bishoujo line, DC Collectibles has also given fans a way to get fun, anime inspired versions of their favorite DC heroines and villainesses with ther Ame-Comi line. While I've tried to pick up all of the DC females in Kotobukiya's line, I've only been buying the Batgirl related figures in Ame-Comi and fortunately I now have another Batgirl to add to the shelf: Steampunk Batgirl. While the genre has been around for quite some time, steampunk seems to be getting more and more popular over the last few years, especially when it comes to cosplay. Look through pictures of cosplayers from any of the major conventions and you're likely to see a few versions of popular comic book characters that have been rendered in the popular steampunk style. Now DC Collectibles has jumped in and offered us a statue of Barbara Gordon as Batgirl in some very cool steampunk garb. Ready for a look at Babs in her neo-Victorian finest? Then join me after the break.... 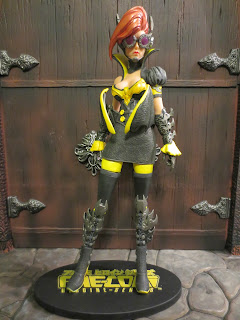 Batgirl herself is 9 1/2 inches tall and stands on a removable base that's 1/8th of an inch tall. While the typical Ame-Comi figure is extremely influenced, I'm not getting that vibe here with Steampunk Batgirl. She doesn't look overly cutesy or have any exaggerated features. She comes packaged in a nice window box that's fairly collector friendly and features some credits on this release: the figure was designed by Jim Fletcher and sculpted by Sam Greenwell. Thanks, guys! 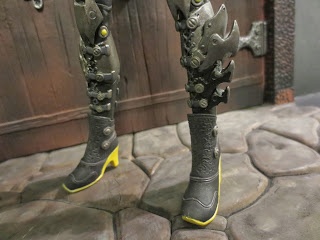 Remember, this is a solid PVC statue with no articulation. She is removable from her base, however, and can stand up on her own if on a flat, level surface. She'll have to lean back on her heels a bit, though. I like the stance that was chosen for the statue; it's a pretty simple stance with her ride leg out just a bit and her right arm reaching behind her to grab a Batarang. It looks awesome and shows off the costume well. 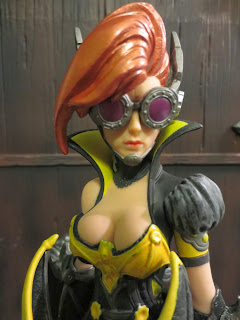 The statue looks fantastic and really shows off some nice sculpting and texture. I'll start with the only thing I'm not 100% sold on with the statue, which is the hair. It's huge and looks massive which I'm not sure goes along with the rest of the statue's aesthetic. It kind of reminds me of the hair you might see on an anime version of Conan O'Brien. I like the goggles, though. They're very "techy" looking (they do have straps, large lenses, and random gears) and nicely mimic the classic Batears on Batgirl's cowl. While we can't see her eyes (translucent lenses would have been a cool feature) the way she's holding her mouth makes it clear that she means business. Her choker has a few little cogs and some nice detail and couples with her high collared corset combo and the bat wings on the corset to create something that is reminiscent of Batgirl's cape, but goes in a different direction. The bat skeleton emblem on her corset is a pretty cool way to work the Batemblem onto her chest although  bones aren't the first things I think of when I hear "steampunk." 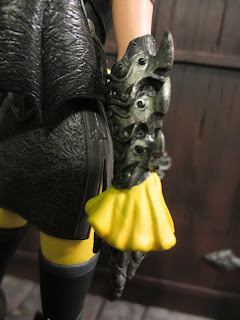 The coolest parts of the sculpt, however, might just be the wicked gauntlets and shinguards that feature the familiar spikes from Barbara's costume. At first glance they appear to be very mechanized but a closer look reveals as pieces of armored plating attached together with rivets and leather straps. It's really a pretty terrific outfit that covers all the Batgirl costume necessities while changing them. 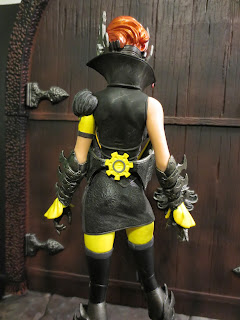 Batgirl has a few instantly recognizable color schemes- there's the traditional blue and gray, the 1966 Yvonne Craig inspired purple and yellow, and the animated series/ New 52 black and yellow. DC Collectibles went with black and yellow here and it turned out great. I have few complaints about the paint on anything other than the yellow on the Batemblem and the blouse sleeves at her wrists. Maybe it's intentional (I doubt it) but there is definitely lots of darker paint or plastic showing through the yellow paint. Yellow paint always seems to have difficulty not absorbing other colors! Everything else looks great, though. The metallic, dry brushed gauntlets, and leathery black skirt and corset, and the metallic red sheen of her hair definitely make this figure leap out at you (figuratively, not literally). Why's her hair metallic? I have no clue, but it kind of works. 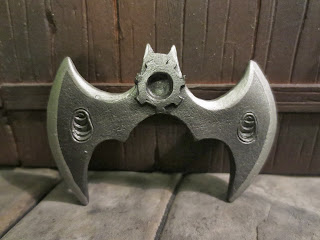 I mentioned above that Steampunk Batgirl comes with a removable stand. It's emblazoned with the "Ame-Comi Heroine-Series" label and features two pegs that plug into the holes on the bottom of Batgirl's boots. It's a pretty small base, but it's plenty large enough to keep her standing. Sometimes really small statues like this have enormous bases that take up far too much shelf space- not the case here! Batgirl also comes with an actual accessory too! It's a very fierce and wicked looking Batarang. It has a peg that fits into a hole in Batgirl's right palm. It might be tough to get in there, but gently work with it for a minute and you should be happy. She looks fine with or without the Batarang in case you want your statue to go back and forth between "I'm going to chuck this Batarang at you" and "I'm going to beat you down barehanded." 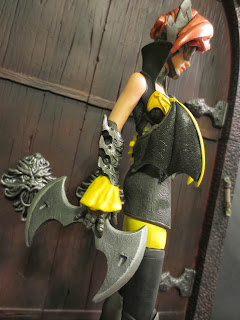 I'm really happy with this statue, much happier than I was with either of the two previous Ame-Comi Batgirls. I'll admit that while the style of the statue doesn't fit in with the previous Ame-Comi releases, I actually think that's for the better. This is a really strong statue and manages to capture some excellent costume design while still making Batgirl look tough and confident. I'm a bit disappointed at some of the messy yellow paint and don't like the hair design, but overall I'm quite pleased. I'm giving her a Great and a 1/2 and look forward to displaying her in my enormous Batgirl collection.
Posted by Barbecue17 at 11/25/2014