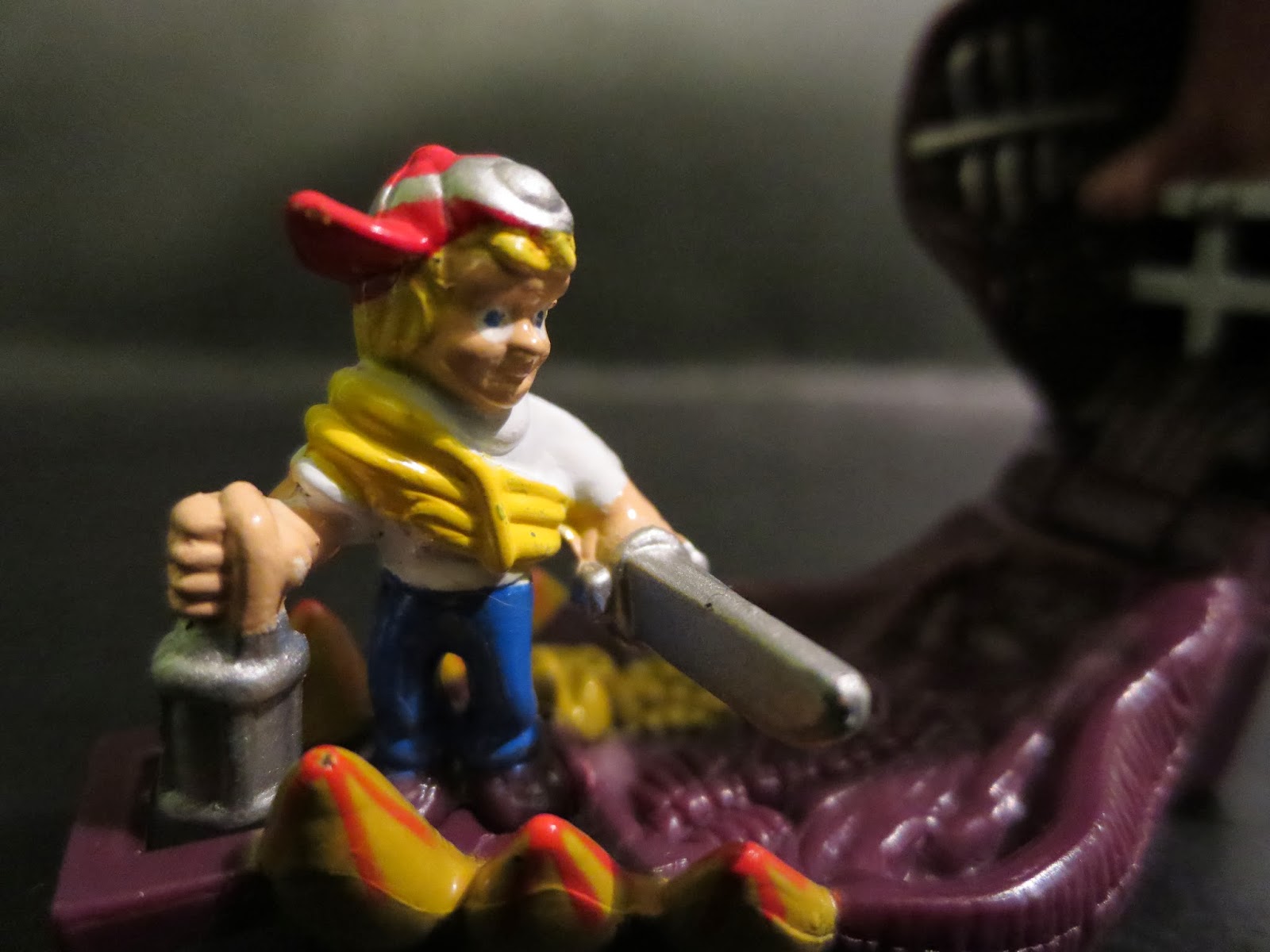 Ready for an ultra-micro edition of Micro Monday? Then let's take a look at some Shrunken Heads from Mighty Max. Released later in the series, these sets were the smallest playsets available in the series. While  these sets eventually were released individually carded the earliest releases had two Shrunken Heads to a pack with four distinct combinations of the eight series one Shrunken Heads. I remember getting these as a kid, possibly in my Christmas stocking, and so these are original pieces to my collection. The set included Rat Trap and Vampyre each with their own unique Max figure. Ready to get super micro today? Then join me after break.... 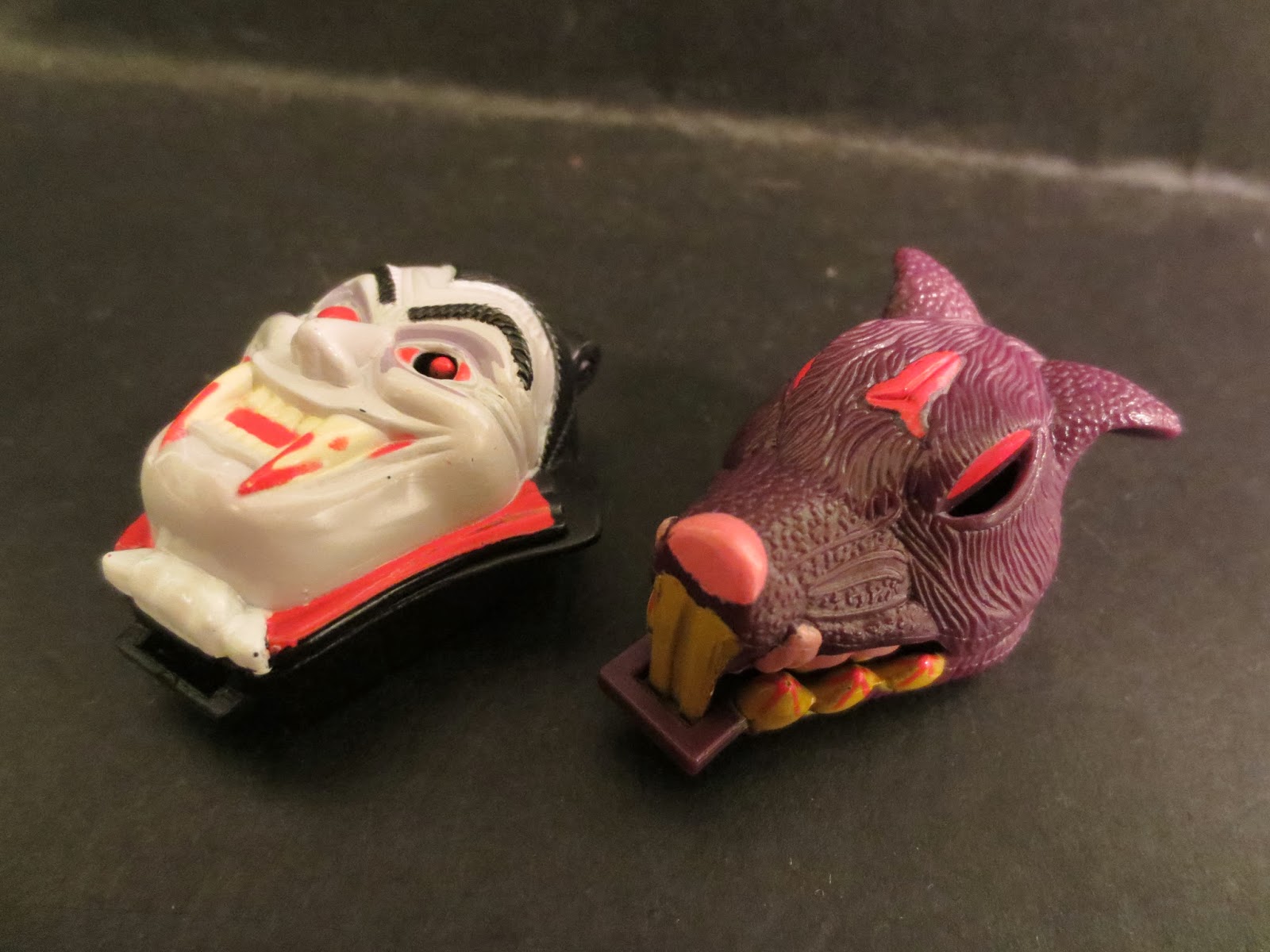 These Shrunken Heads are really small, much smaller than even the Horror Heads. These sets are between 1 1/2 and 1 3/4 inches long and are only around an inch wide. While the sets opens up like their larger brethren, they only come with one figure each: a unique Max figure. While most sets used randomly inserted Max figures, the Shrunken Heads and the Monster Heads had Max figures that were specific to each set. 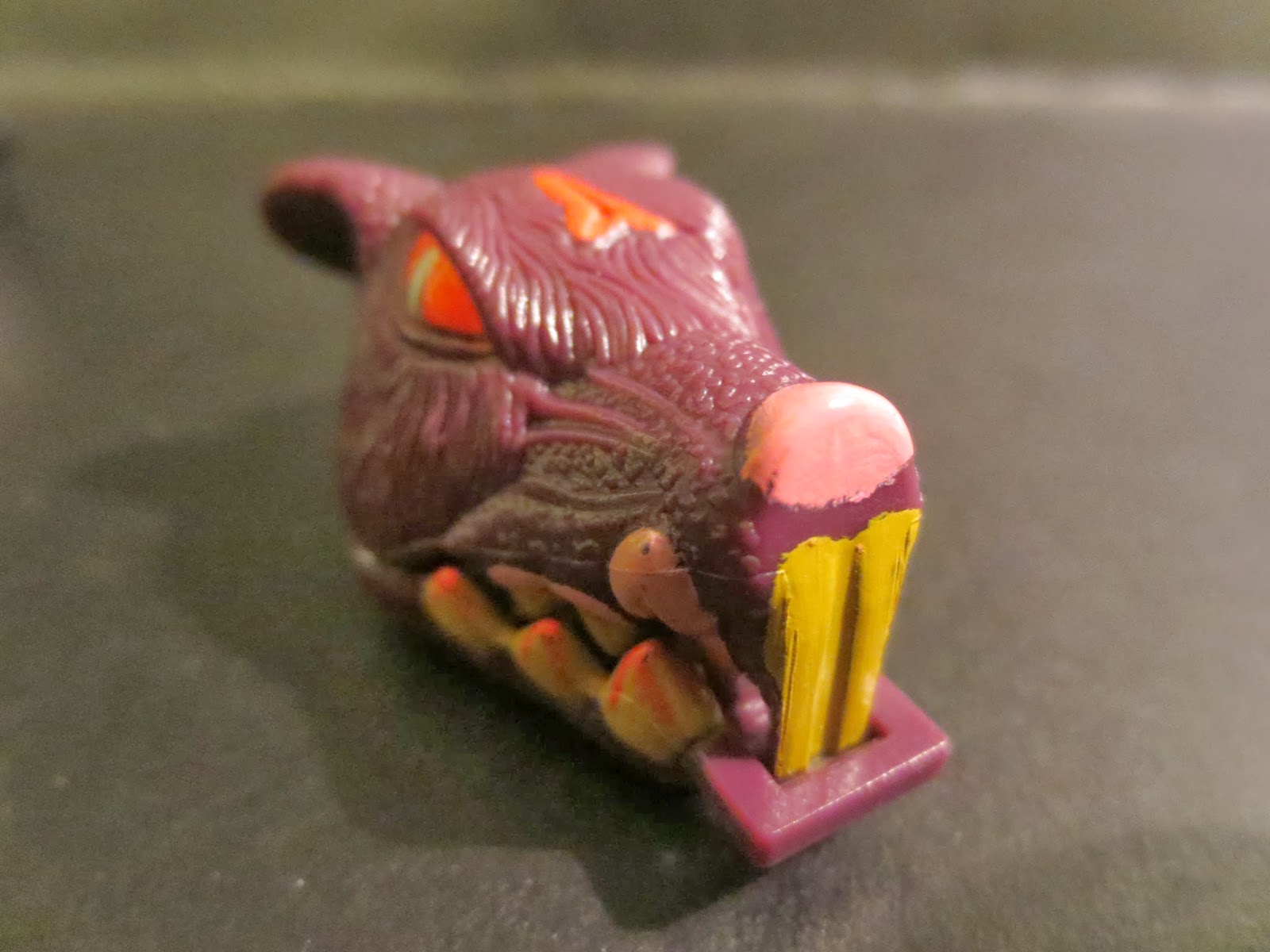 On the outside Rat Trap simply looks like a really creepy rat. He has some massive sharp teeth that are dripping blood and blood red eyes with silver pupils. You can actually see a nice fur like texture on his face as well as sculpted whiskers. One of my favorite things about this set is that his two pointy front teeth function as the clasp that holds the set together. 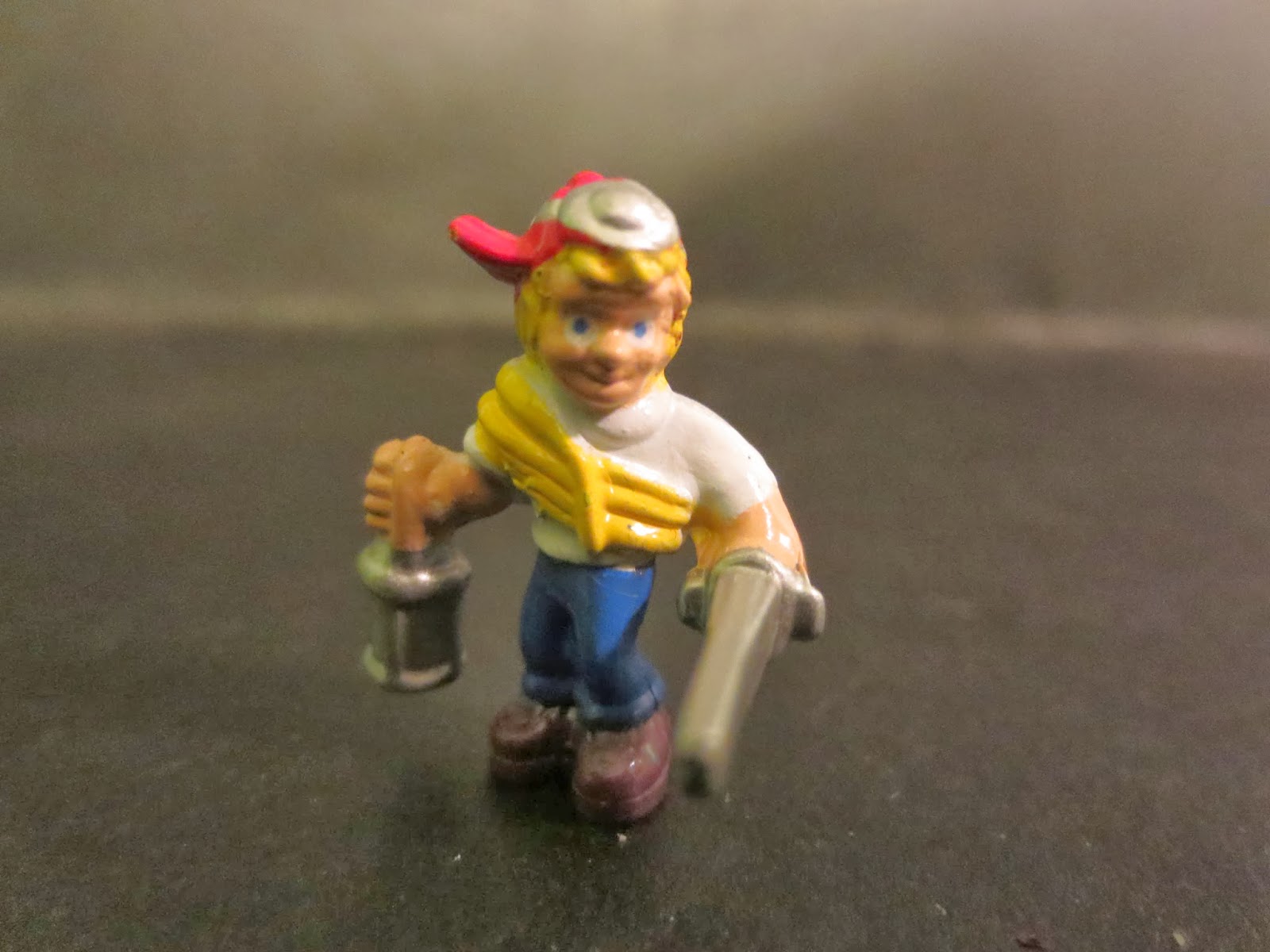 Inside is a very cool Max figure. He might be one of my favorites as he is armed with a machete and is carrying a lantern. He's also wearing a length of yellow rope around his torso and a headlamp over his baseball cap. 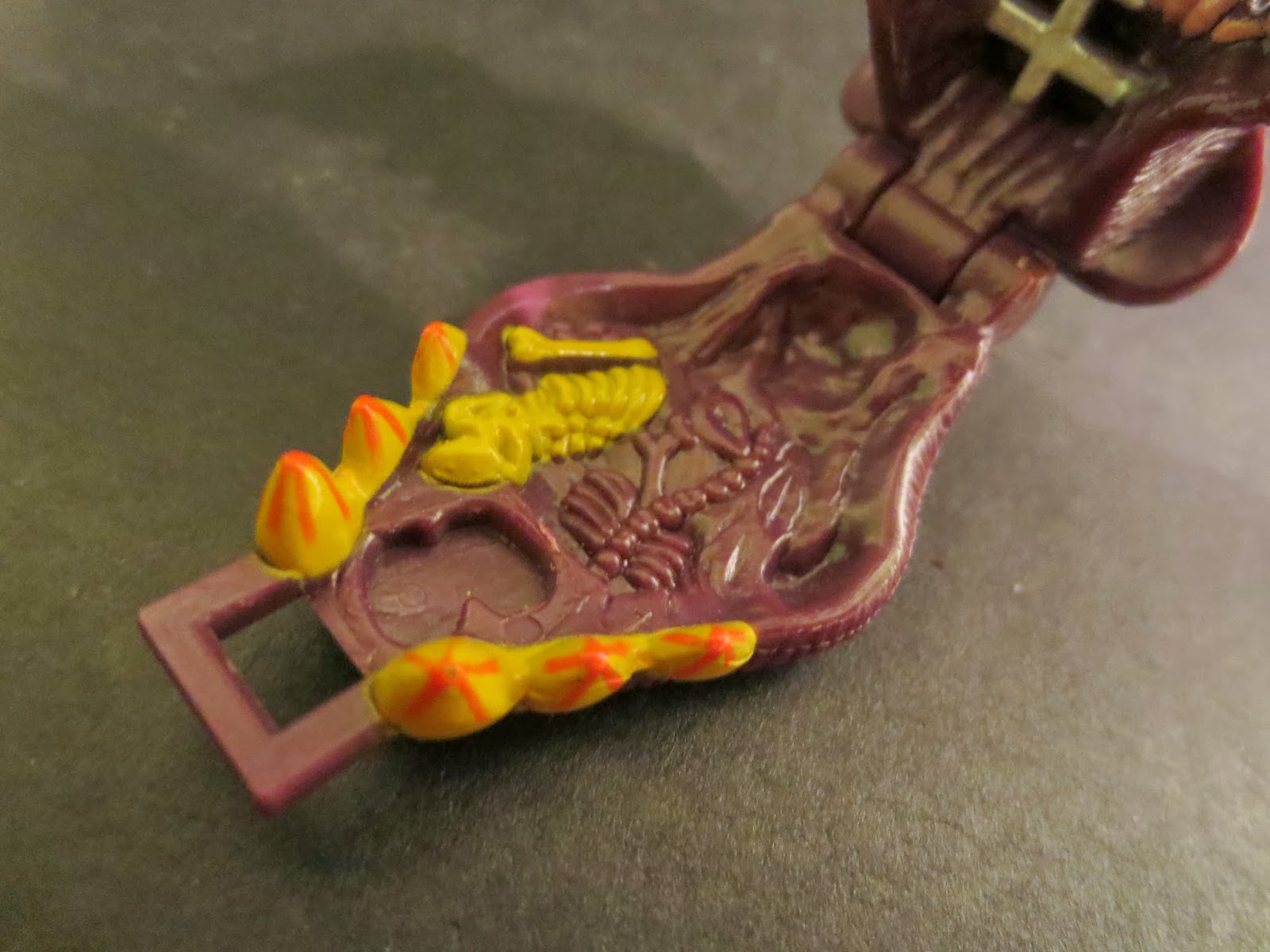 There isn't a lot inside of most of these sets. The base of Rat Trap does have some fantastic sculpting that shows off a floor littered with bones and a small footprint for Max. One of the skeletons and a random bone is even painted the same putrid yellow as Rat Trap's teeth. These nicely set up the feel of the lair of some large and vicious predator. 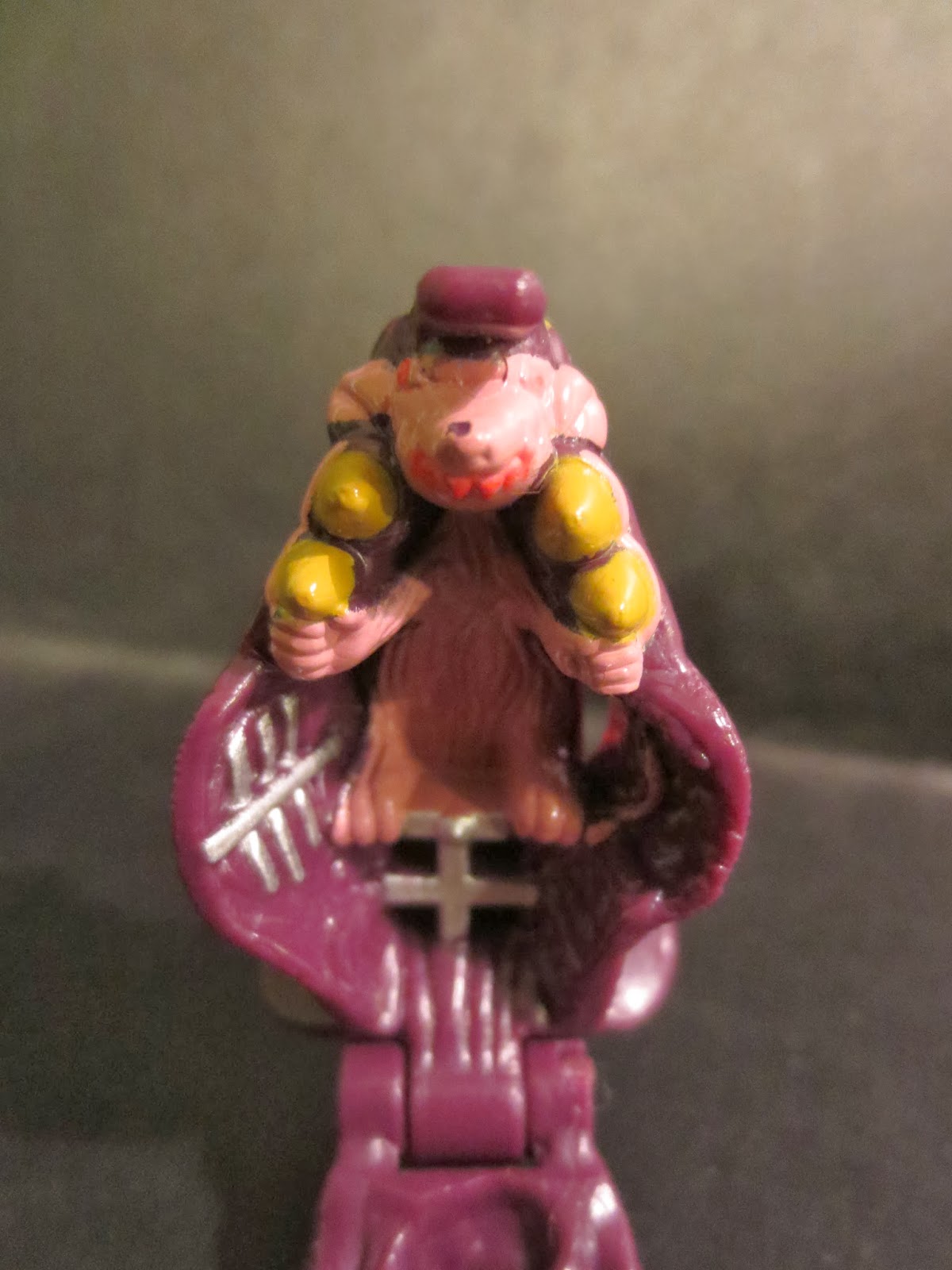 Back inside the vertical part of the set is Rat Trap himself. He's a large rat that is rather awkwardly sculpted as a relief from the rear wall. He's really awkward looking as his body had some really bogus proportions. He always made me think less of some cool rat person like Ratar-o from Thundercats and more like someone in a bad rat costume. 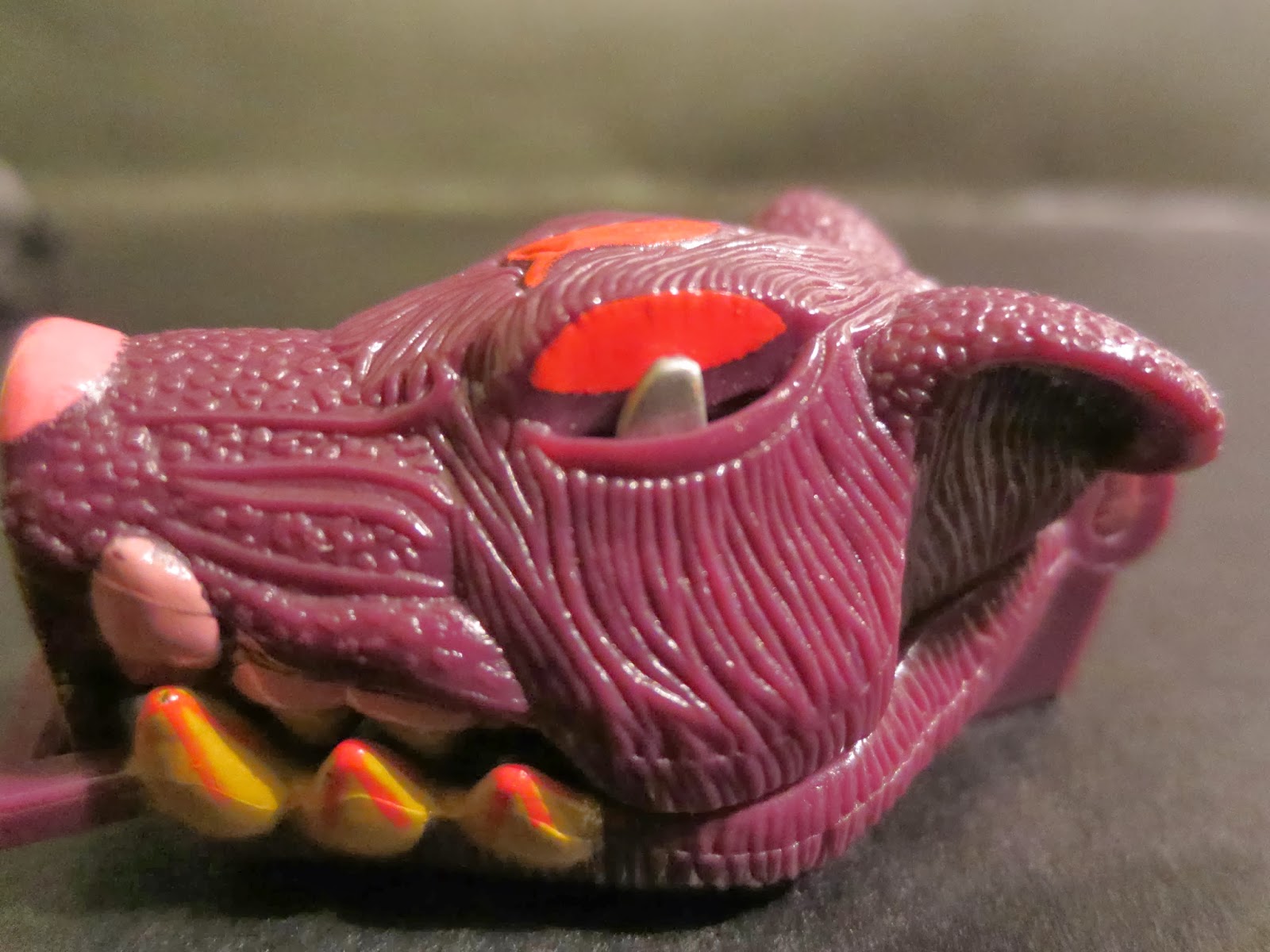 To store Max, simply lay him flat down on the pile of bones. When the set is closed, the tip of his machete actually pokes up through the top and forms the silver sliver on the left eye. A neat feature, but overall this is a disappointing set. I like the idea of making super small sets where the main focus was just the figures, but the inside of this set is largely disappointing as the large rat just looks really cheesy. No pun intended. 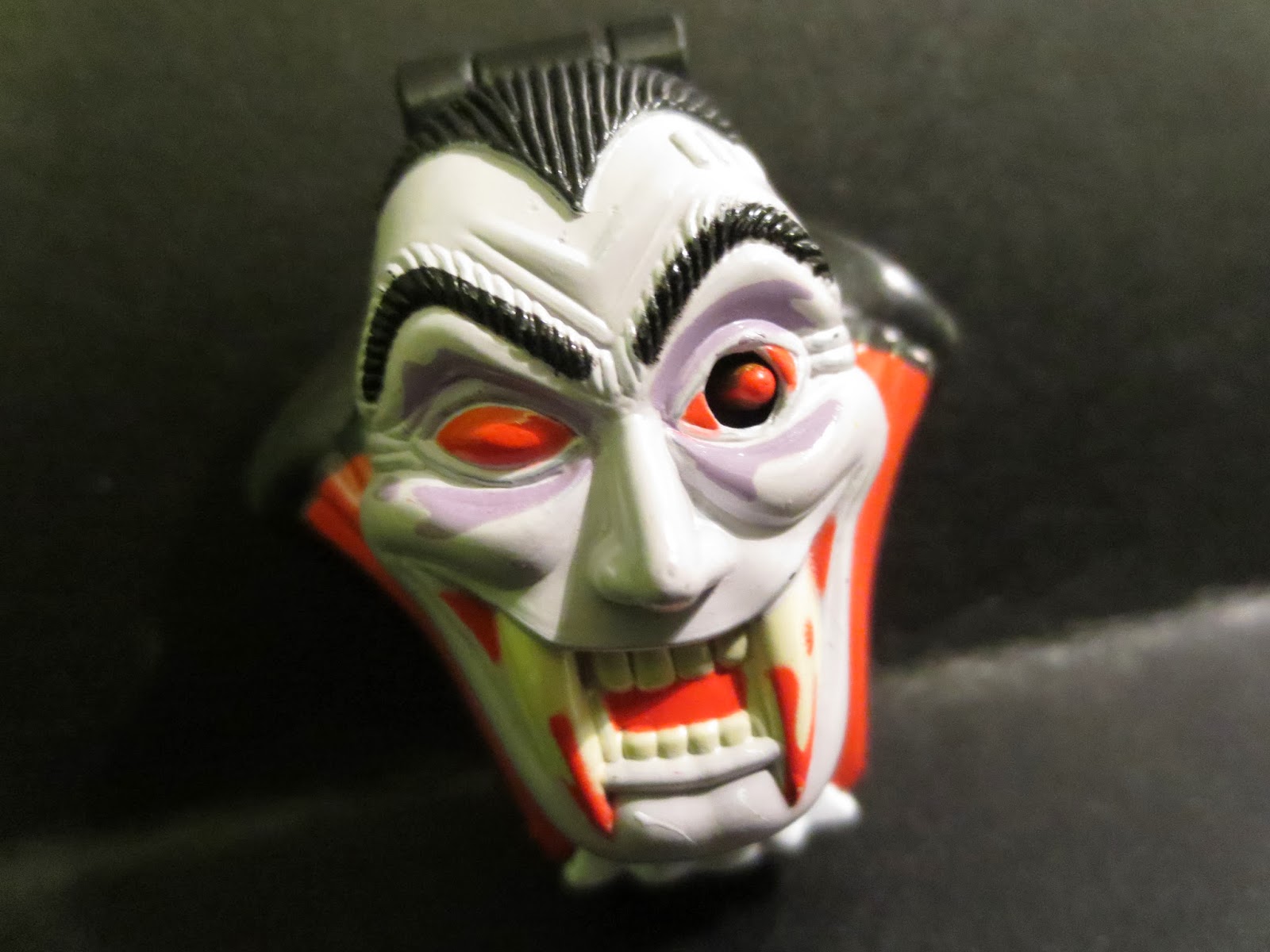 Vampyre is your standard vampire. He's wearing the traditional vampire costume that he might have picked up as part of a drugstore costume kit. I like his bloody fans, though, and also like the weird shading on his purple skin. Why does he have stitches on his forehead, though? Can't vampire's heal themselves? Anyways, what else is cool is that while the top of the Shrunken Head looks like the vampire, the bottom half looks like a coffin. 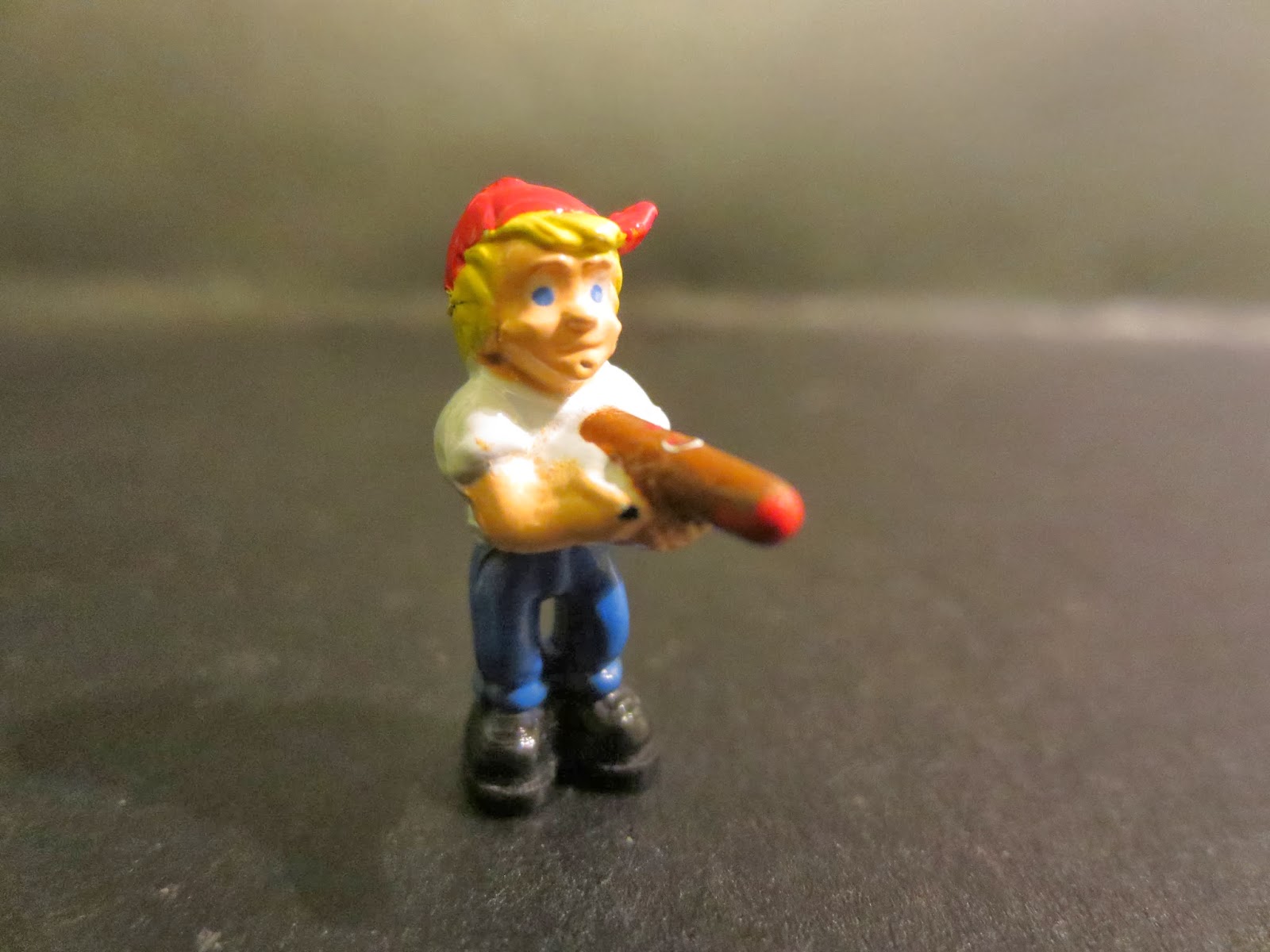 Inside is a Max wielding a large stake with a bloody tip. He's holding it really awkwardly; who would hold a stake like that? He also looks a little too happy for someone who is getting ready to drive a large piece of wood through a creature's heart. Calm down, Mighty Max. Maybe talk to a counselor or something. 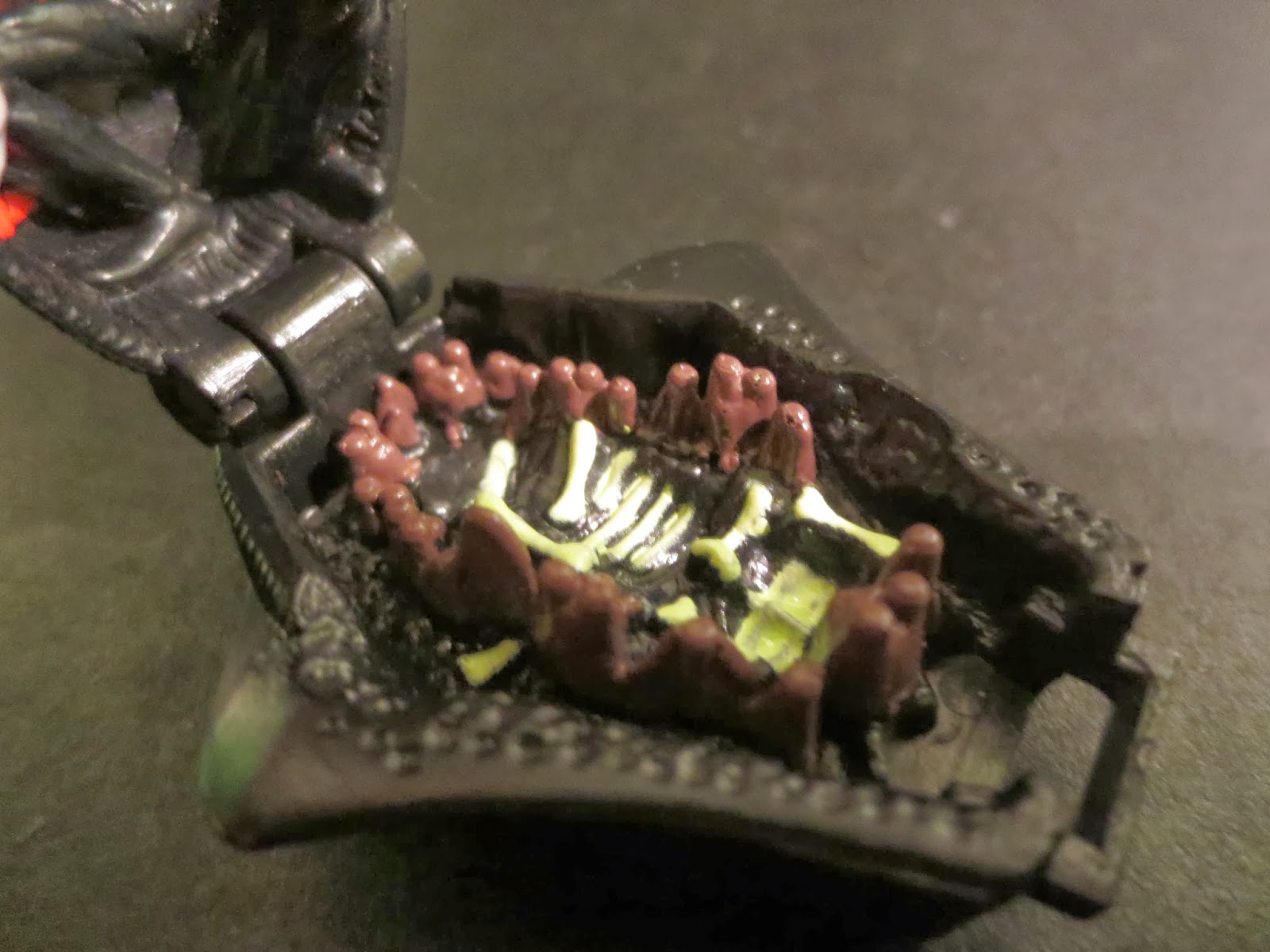 Inside, the bottom of the set is a pile of bones (a recurring theme in Mighty Max sets) that almost looks like a little makeshift tomb. The sculpting is really nice with great detail. I love the little creepy details like this. 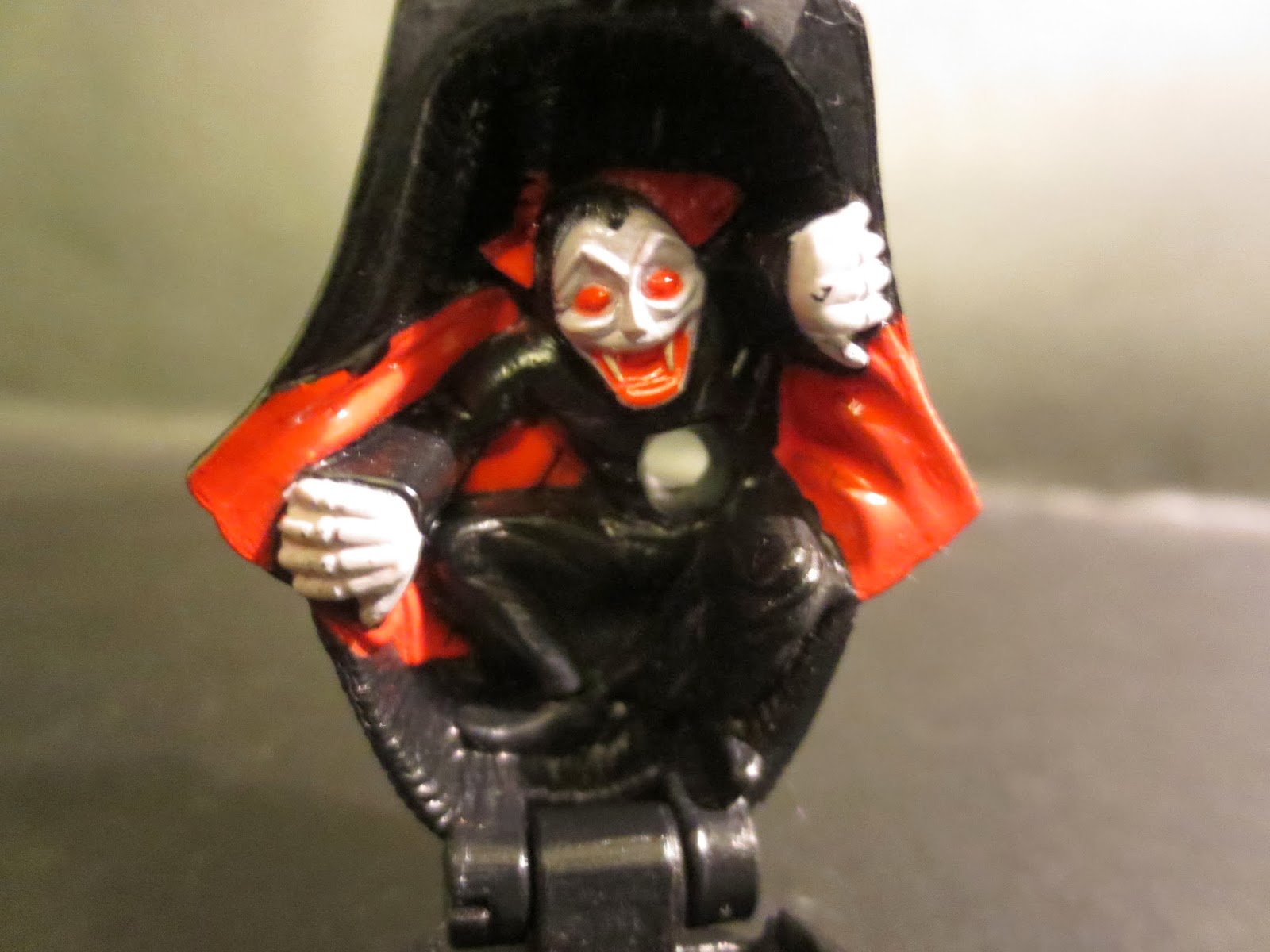 Unfortunately, like with Rat Trap, Vampyre himself is kind of lame. He's just part of the sculpted background and looks like he's climbing through a cave or something. He's kind of hunched over, so he must be pretty spry. He looks a little silly, however. I mean, check out that face. The Count from Sesame Street would probably try to steal this guy's lunch money. 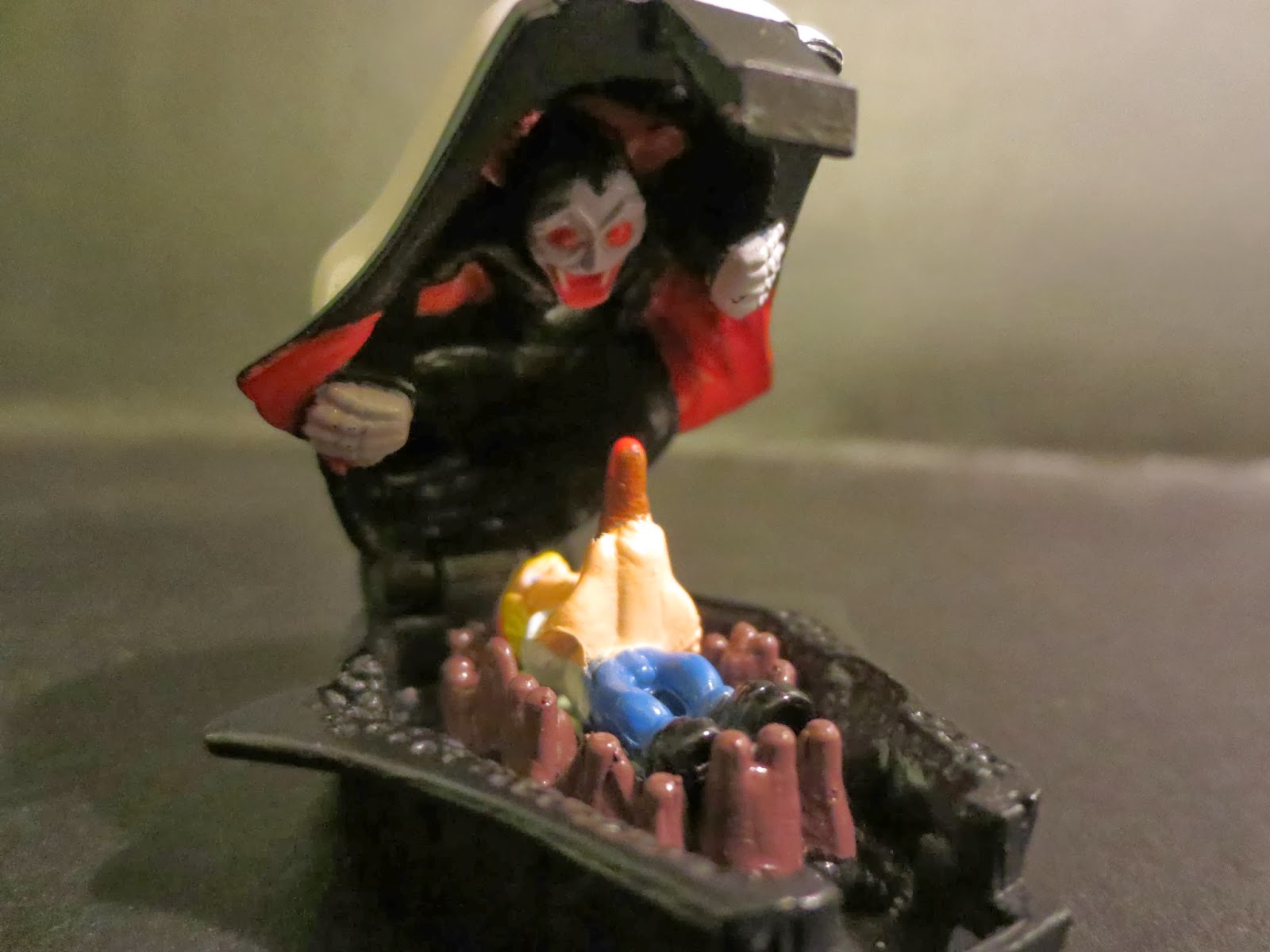 To stow the set Max lies in the shallow grave with the stake pointing up at the Vampyre. When the set closes the stake actually fits through a hole in Vampyre's stomach (it doesn't look like his chest) and thus the red tip of the stake serves as one of the eyes for the Vampyre. Kind of a cool feature, but once again the interior monster leaves much to be desired. The grave is great; Vampyre is lame. 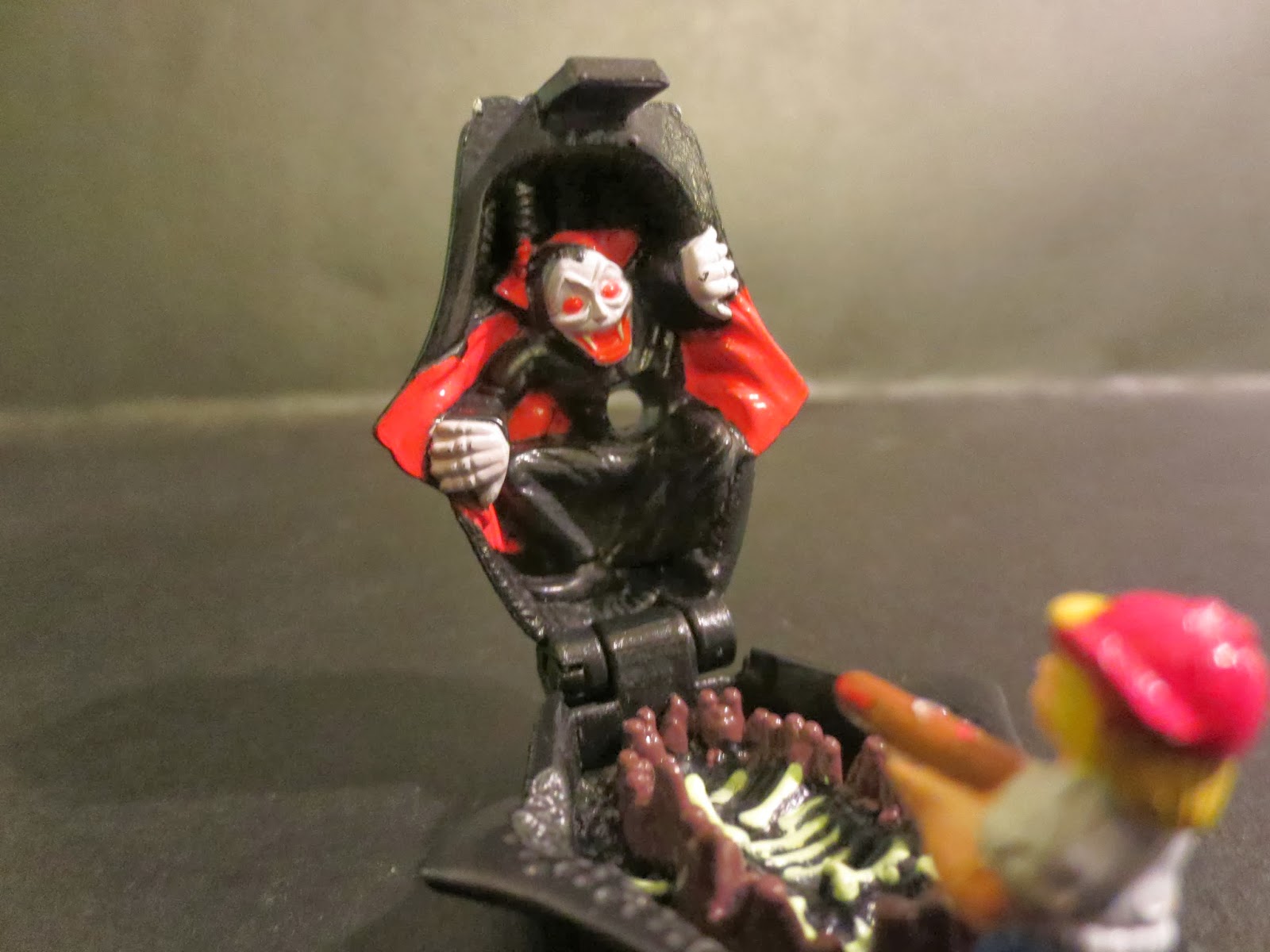 Overall, I appreciate what Blue Bird was trying to do with these little sets (get out new, cooler Max figures at a lower price point) but the interiors just weren't that impressive. I really would have preferred two smaller figures and less detail inside, but that's kind of water under the bridge when discussing a toy that is now over 20 years old. Overall, I'd give both off these sets an Eh rating. If you're interested in getting into Mighty Max, you'd be much better off starting off with any of the Doom Zones or larger sets like Skull Mountain and Dragon Island before tracking these guys down. They're a curiosity, but little more.
Posted by Barbecue17 at 11/23/2014