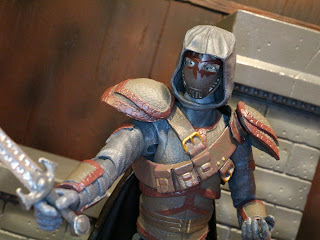 I've admitted before that I've only seen the first few episodes of Gotham and that hasn't changed since December when I reviewed series 3 of Diamond Select's tie-in action figure line. I really do want to watch the show, but I just haven't gotten around to it. I'm a terrible TV watcher. I think it's that by the time I get around to sitting down and watching TV, I'm usually more in the more in the mood for just watching something crazy like MST3K rather than something a bit more intense like Gotham. Anyways, before jumping into this review I want to point out two things. First, I don't know much about this incarnation of Azrael. In comics Azrael has been two different characters: Jean-Paul Valley and Michael Lane, but Gotham introduces a new character, Theo Galavan, as this incarnation of Azrael. Second, this is the Toys R' Us exclusive version of Azrael. For many of Diamond Select Toys' lines, Toys R Us have been given scaled down releases lacking the deluxe display bases Diamond typically includes. Originally I planned to order the standard releases of all of series 4 due to the cool GCPD jail cell that was supposed to be included as a build a display with the series, but Diamond Select announced that this was going to get scrapped in favor of more alley wall displays. I decided to hold off and pick up the TRU releases, which started popping up last month. I have no idea when the regular releases will hit, but the TRU releases only cost about $15 bucks each. For me, that was the magic price that convinced me to pick them up. Well, two of them anyways; Mr. Freeze was nowhere to be found at my local TRU. Azrael's up first, though, so let's check him out! 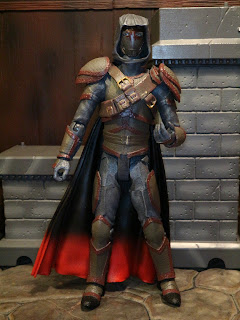 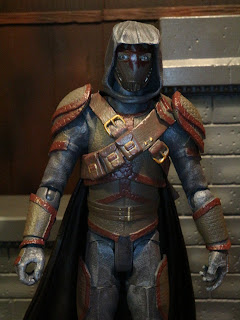 
*Overall, I really like the look of Azrael's suit here. It not only looks pretty accurate to the show but it just seems like a pretty good design for Azrael, too. If this version of Azrael showed up in a DC film or in the pages of a comic, I wouldn't be disappointed at all. The sculpt features quite a few different textures on the armored parts and a cool bandolier featuring various pouches and buckles. It looks functional but not too busy. 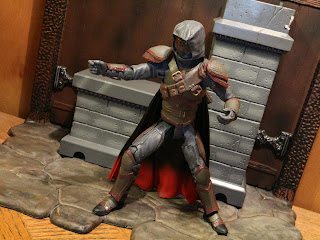 * Azrael has some very impressive articulation. I'm not usually a fan of H-hinged hips but they actually look pretty good here. The joints also feel quite durable and have a decent range of motion. The head also has a great range of motion since the hood is actually attached to the head and not the body or the cape. 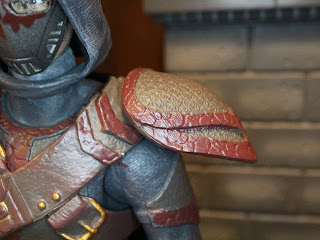 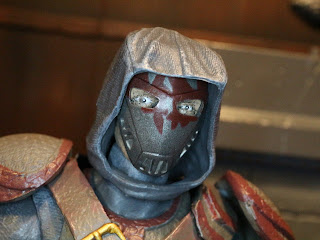 * Overall, I really like this headsculpt. Well, the mask anyways. The sculpt and paintwork is really nice on it while the hood being an actual separate piece helps to make it look more dynamic. 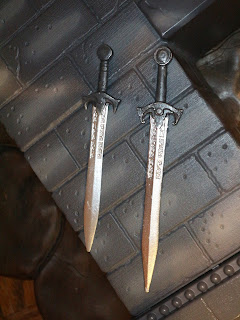 * Azrael comes with two swords. I'm assuming this is the Sword of Sin. Well, one of them anyways. Again, I haven't seen the show but I do know there is some plot point involving a fake Sword of Sin, so maybe one of these is the fake sword and one is the real deal? Seems plausible! Both sculpts are quite nice with good weathering and intricate detail on the blades. 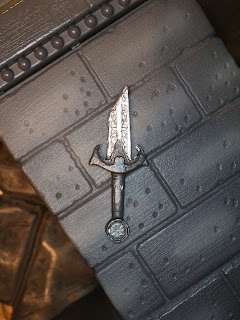 * Technically, Azrael comes with three swords. Well, maybe two and a half. This one is actually the hilt from the shards of Narsil. OK, that's actually not true. I just wanted to make sure you are paying attention. This looks like a broken version of one of the swords above. Is this maybe a broken version of the fake Sword of Sin? If you know, please let me know in the comments below! It's still a cool accessory, though. The only other figures I own that come with broken swords (that I can think of) are the various Aragorn figures from Toy Biz's The Lord of the Rings line. 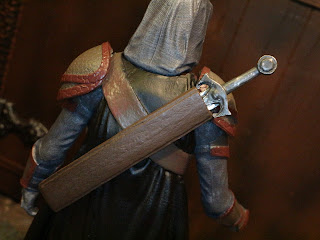 * On the back of Azrael's bandolier is a functional sheathe. Any sword can fit in it, but the longer of the two intact blades fits in it the best. It looks really cool back there, too. 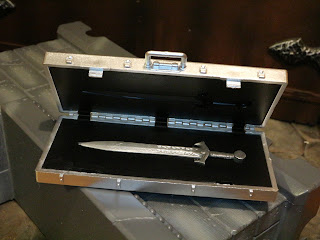 * The coolest accessory that Azrael comes with is this very impressive carrying case. It's painted to look like stainless seal (it is plastic, though) and actually opens up to reveal a space to carry the shorter of the two intact swords. This is such a cool display piece as it looks awesome on display near the figure or actually being carried by Azrael. I don't know the story behind this case but I'm digging it. 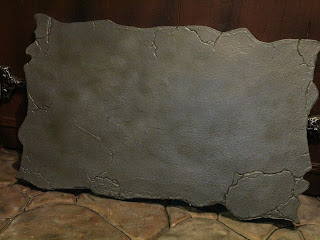 * Rather than whatever larger display piece Azrael will come with in the standard release, Azrael comes with a flat base that looks like a piece of concrete. The sculpting is pretty cool and features lots of cracks and dents as well as a dark, oily wash. It truly captures the worn, rugged beauty of a Gotham City parking lot. 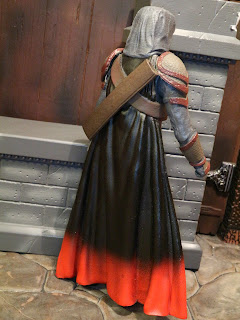 
* Azrael's cape is made from a heavy, inflexible plastic that definitely inhibits the figure's movement. It looks decent but it prevents Azrael from assuming more dynamic poses. No ominously crouching on rooftops for this guy! Diamond probably should have went with an actual cloth cape or, at the least, something much more flexible. 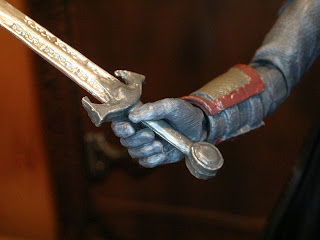 *Azrael's hands really don't hold his swords very well. You can get the hilts in there, but they wiggle around a bit. 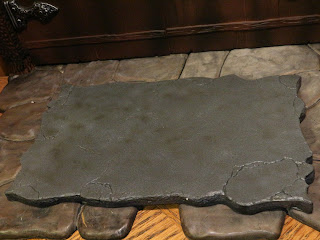 * You know what would have been nice? If the display base had a foot peg or two to allow the figure to stand on. 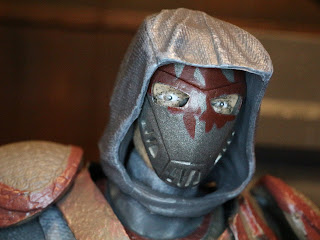 * Take a look at this portrait again. I love the mask, but the face underneath seems a bit off, even when looking at images of the show's costume. I'm not exactly sure where the problem lies, but I think the mask is a bit too small. It makes the eyes and exposed face look too much like later versions of Jason Voorhees. 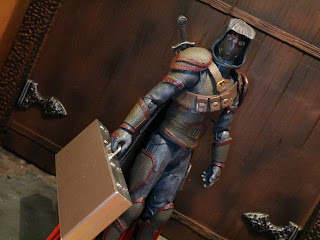 I am very impressed by this figure! Even if you're not familiar with Gotham, this is a solid interpretation of Azrael. I know I had a few negative points but they're pretty minor. The figure has nice sculpting, excellent paintwork, and a very generous complement of accessories. For $15 bucks, this guy is quite a value and well worth hunting down. While I don't know what extra accessories the standard release will include (the head is easily removable, so maybe an alternate unmasked portrait of Theo Galavan?) I still feel pretty confident in having picked up this Great release.


The only other Azrael figure I've reviewed on here is the Arkham Knight version of Azrael.

If you're looking for more Gotham reviews, check out the following: