Action Figure Review: Arsenal from Red Hood and The Outlaws by DC Collectibles 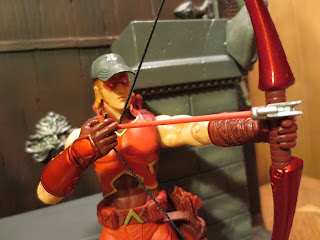 Today I'm taking a look at Roy Harper, AKA Arsenal. In pre-Flashpoint continuity, he's also been known as Speedy and Red Arrow. Man! Roy's got a ton of aliases! While everyone seemed to hate the book at first, I really feel like Red Hood and The Outlaws has grown into one of the better titles that emerged from the New 52 relaunch. While it still has ties to the Batman family of books, it also has its own feel. Tonally it can jump back and forth between sci-fi/ superhero action and adventure, comedy, and being a serious look at the relationships between three very broken characters. While Koriand'r is an immensely powerful alien and Jason is a resurrected former Robin, Roy's kind of the more normal guy. Well, normal in the sense that's he's a brilliant inventor, a recovering alcoholic with Killer Croc as his sponsor, and an ex-sidekick to Green Arrow. One of the things I like about the book is that none of the characters are perfect by any stretch of the imagination. They're also pretty fun to watch when they get down to the business of going after the bad guys. There are three figures in this line based on the comic: Red Hood, Arsenal, and Starfire. I bought Red Hood when he first came out and I picked up Starfire over the past summer on sale. I decided to complete the trio and was pleased to find that Arsenal is a pretty easy figure to find on sale now as well. Ready for a closer look at my favorite trucker hat wearing hero? (Sorry, Trump: It's not you!) Then join me after the break... 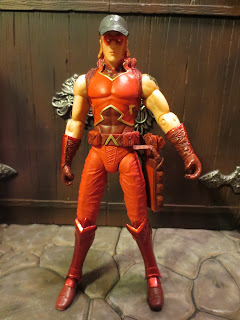 Accessories: Bow and one arrow. 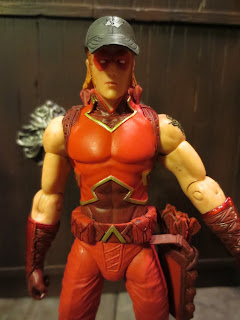 
* I really like the sculpt on Arsenal. It nicely fits in with the other figures in DC Collectibles' variety of New 52 themed sets but still has a look that fits the art of the book. Roy's not wearing anything too elaborate; heck, he could have just thrown together everything red he owned. The paintwork is neat, clean, and features a variety of different shades, which makes the all red outfit more interesting. 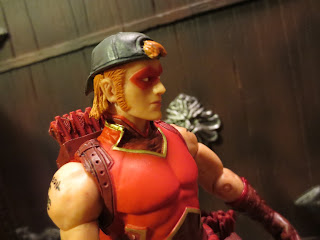 * I bet you were reading over the list of articulation on the figure and were all like: "What the french, toast?" when you saw the words "swivel trucker cap, huh? In a piece of articulation that I've never seen before, Roy features a swivel join that allows his hat to spin around so he can wear it backwards or forewards. It's a cool feature! Whether Roy just wants to look hip or engage in Pokemon battles, he's ready with a spinning cap. 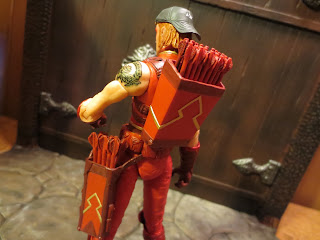 * I love that Arsenal is sporting a plethora of arrows. He's got a huge quiver on his back and a smaller quiver on his right hip. It'd be nice if they were removable, but they're not. The arrows (permanently molded into the quivers) looks great though. You can see some fine detailing on the feathers thanks to a dark wash and nimble sculpting. The small pouches on the hip quiver are cool, too. I bet Roy keeps Kit-Kats in there. 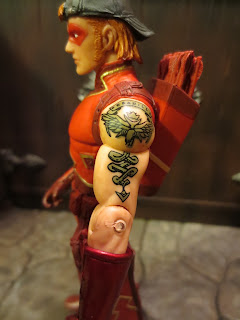 * I'm loving the work on Roy's tattoos. His left arm has a tattoo of a bird of some kind with the word pesadilla above it. That means nightmare in Spanish! On his right shoulder is a scorpion with the word "poison" and a skull that looks like he has a goofy hipster mustache. It's actually a bow and the skull it supposed to have arrows coming out of it in a few different directions. 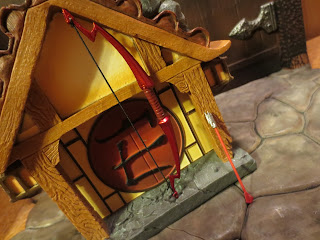 * Roy's bow and arrow are pretty nice. The bow is his standard bow and it's nice and flashy. The metallic red paint looks awesome. It even has a string on it, something that Mattel has sworn up and down they can't do for safety. Fortunately, DC Collectibles like to live dangerously! The arrow is a specialized trick arrow of sorts but I don't recognize it. It looks cool, though. 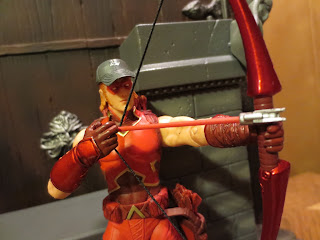 * I have to admit that I love the fact that Roy can actually hold the bow, arrow, and bowstring. It's not a perfect look, but very few archery themed figures can do this. 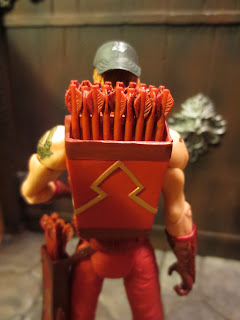 *While the figure is showing off a ton of arrows in both of Arsenal's quivers, it would have been nice if Roy came with more than one arrow. How cool would it have been if at least one or two arrows from each quiver were removable accessories? What's an archer without a bunch of arrows he can fire to turn the baddies into pincushions, anyways? 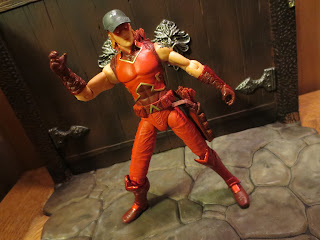 * Roy's a bit...stiff. He has a decent amount of articulation and, while you can still get his arms in an archer appropriate pose, he just feels too stiff to be dynamic and super-heroic. I think this figure really needed a bit more leg articulation and either a swivel waist or a ball jointed torso. 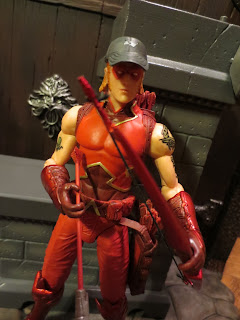 DC Collectibles did a stellar job with Arsenal. While he's a bit stiff and a bit light on arrows, he's a well sculpted figure with great quality control, nice paint work, and an articulated hat. Seriously, that little joint just blows my mind. While Roy Harper as Arsenal is getting a huge push on Arrow lately (well, that's what everyone watching it tells me, anyways) if you haven't given Red Hood and the Outlaws a chance since early in the title's life, give it a chance. Things really start to pick up around the third trade paperback and I think you'll be impressed by it. Overall I'm quite happy with this figure and I'm giving it a Great rating. Now that he can be had for around $15 bucks, he's a great buy.

While I own Jason Todd as the Red Hood, I never reviewed him on here. I did review Starfire though.
Posted by Barbecue17 at 11/09/2015