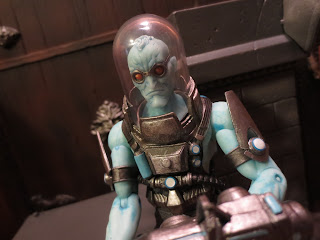 While Mr. Freeze was once a simple, gimmick themed villain, he has since become a character reinvented a few different times with ever more heartbreaking backstories. In the New 52 continuity, Victor Fries' backstory includes his mother falling in a lake but being saved from death by being frozen, Victor performing a mercy killing for his mother after she has been forced to live in pain due to the accident, and Victor falling in love with Nora Fields, a 23 year old woman in cryo-stasis whose family had her cryogenically frozen in the 1960s due to an incurable disease. Honestly, I think Victor Fries' new origin story was one of the best re-imaginings in the New 52 experiment. Today I'm looking at the Mr. Freeze figure from the Greg Capullo inspired DC Designer Series of action figures from DC Collectibles. Freeze had a pretty radical redesign and while yes, I know his arms aren't covered, he has a pretty cool new outfit. Ready for a closer look at this series 2 figure released at the end of 2014? Then join me after the break... 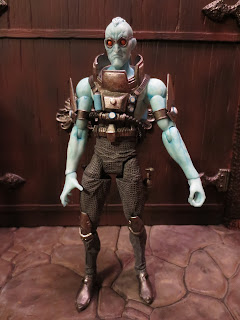 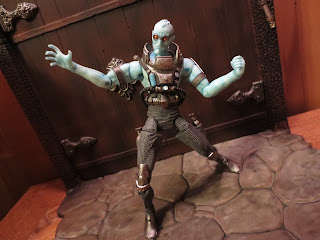 *I was amazed to find that Mr. Freeze has plenty of functional and well designed articulation. I figured he'd be one of the figures in this line to be given the more minimal treatment, but he's fully capable of dancing to "Ice Ice Baby" if you so desire. 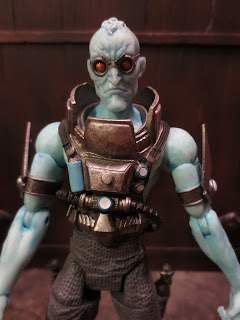 * The sculpt is awesome. There are some elements of a more traditional Mr. Freeze here, such as the bluish skin, armored outfit, and the red goggles, but there are also some newer elements such as the odd hairdo and the less bulky costume. The skin color is a awesome mixture of blue and white while the face makes me think of the Snow Miser from "The Year Without a Santa Claus." The level of detail here is just superb. 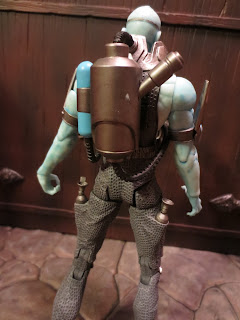 * On Mr. Freeze's back you can see a massive tank that controls the coolant for his dome. This is a separate piece attached onto the figure but it isn't removable. It is pretty elaborate, though. I'm not sure what those small canisters are sticking out of the cargo pockets on Freeze's insulated pants but I'm guess that they're supposed to be some sort of coolant containers for use in the freeze ray. The little clips on the tops of the canisters spin, which is kind of a cool little feature. 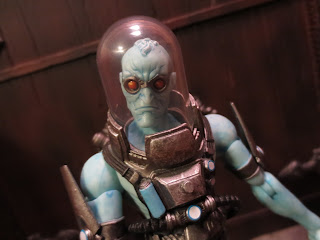 * Mr. Freeze's dome is easily removable so you can pose his head underneath. I love this feature as it preserves his articulation while still giving him the iconic dome that keeps him nice and chilly. 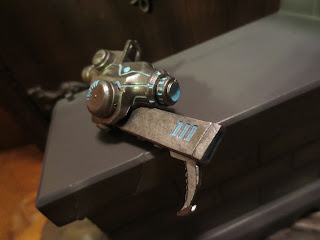 *Mr. Freeze's freeze ray is a really cool looking weapon. It definitely has an unconventional design but that makes it look more like a prototype or a piece of lab equipment rather than a standard weapon. It kind of reminds me of the gun from Portal. It a fit in Freeze's left hand and looks really wicked with some great blue paint highlights. 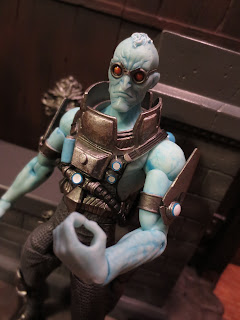 * I really don't have any complaints about Mr. Freeze. He's an incredibly well made figure. I know that some folks definitely don't like that this version of the costume has open skin for Mr. Freeze on his arms and torso, but I don't think that he's effected too much by stuff like that in the New 52 continuity, right? It's more that he likes and is energized by the cold. 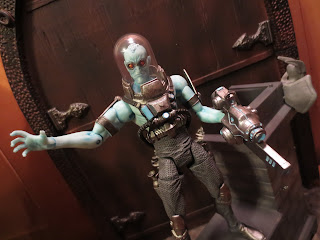 This guy really surprised me. His sculpt and paintwork are incredibly detailed and he has way more articulation that I assumed he would. Mr. Freeze is a fun figure and definitely makes a nice addition to the Greg Capullo inspired DC Designer Series. If you're looking for a modern Mr. Freeze, this is your guy right here. While I don't like this outfit nearly as much as the Arkham City outfit, this is still a Great figure and well worth picking up for your Rogues Gallery.

I've reviewed a few other figures from this series, including:

I've also reviewed the one other Mr. Freeze figure: