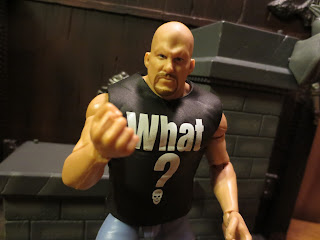 I mostly pick up the newer WWE Superstars, but how could I not pick up a figure of Stone Cold Steve Austin? I've been playing WWE 2K16 on Xbox One and this year Stone Cold Steve Austin is the focus of the campaign mode. I was out on a toy run at Target when I stumbled across this figure from Mattel's Hall of Fame spin-off of their WWE Elite Collection. After picking him and looking at some pictures from previous Mattel releases, I've come to believe that a great deal of this figure is reused from the WWE Legends series 1 Stone Cold Steve Austin figure that was released a few years back. Ready for a closer look at the Texas Rattlesnake who pretty much defined the WWF Attitude Era of the 90s? Then join me after the break... 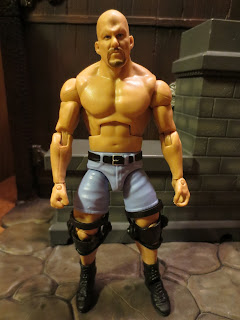 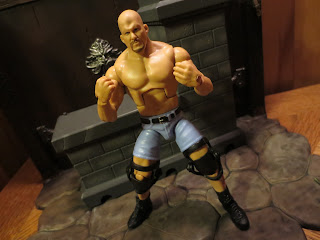 *If WWE Elite figures have great articulation, give me a Hell Yeah!

If they're sturdy and durable, give me a Hell Yeah!

If they're fun to play with, give me a Hell Yeah! 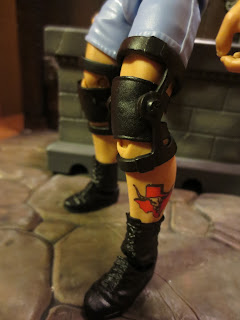 * While he only used one brace earlier in his career, later on Stone Cold started using two knee braces. This figure represents a later Stone Cold and features braces on both of his knees. Stone Cold has on black kneepads floating over his double-hinged knee joints and the braces over top. While the braces bend due to being flexible, they do actually have functional hinges in them.

Mattel has also captured Austin's tattoo of the Lone Star state with a cattle skull over top. It's clearly visible above his boots. 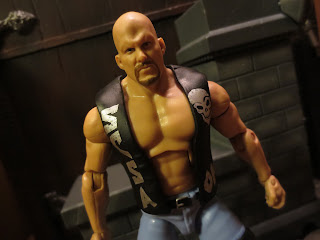 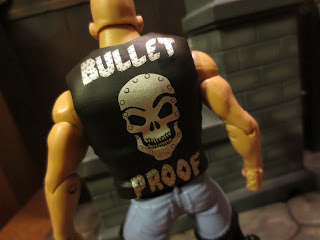 * Mattel does a nice job with the printed text on their wrestling figures. On the front of the vest is "SCSA"which stands for Sedgwick County Soccer Association and OMR which stands for "One More Round." The latter is actually true, by the way. Also, check out the back of the vest: Robotic metal skull!!! 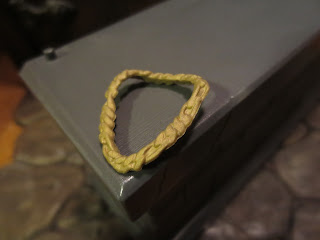 * Stone Col Steve Austin comes with three accessories, one of which is this gold chain. That's what it's supposed to be anyways. This is really a pretty poor accessory as it seems too large and is rather dull. It looks like something from a 1980s Mr. T figure or something Austin got from a gumball machine at the nearby Mega Lo Mart. 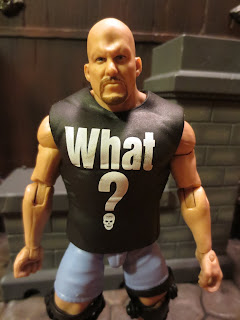 * It's really cool that Stone Cold comes with the "What?" shirt (complete with a little skull for the tittle on the question mark) but it just looks a bit oversized for him. I would have much rather had a fabric shirt rather than the plastic shirt that was included. 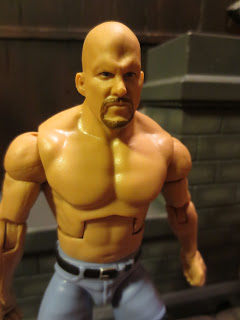 * I don't think there's any doubt that this is Stone Cold Steve Austin, but doesn't his head look a bit off? To me, it looks like there's a dent in his head or something. Can you see it? It was the first thing I noticed when I pulled him out of the package. Did he get hit in the head with a chair by Vince McMahon one to many times perhaps? 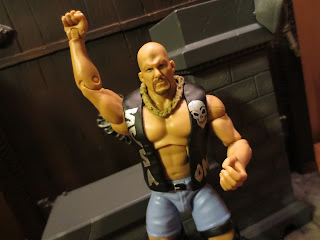 Surprisingly, Mattel hasn't made that many Stone Cold Steve Austin figures yet. I'm sure that we'll be getting more soon as I imagine that Stone Cold's immense popularity will only be boosted by his appearance in WWE 2K16. I have to say that I'm a bit disappointed in this figure. The headsculpt seems a bit off and I'm not a fan of the chains or the T-shirt, but for Stone Cold Mattel needs to go all out. Let's hope he gets a Flashback figure in an upcoming Elite collection series. As it stands, this guy gets an Eh and a 1/2 rating from me.

I've been on a collecting spree with Mattel's WWE figures! I've reviewed quite a few these past couple weeks as we've been making out way to Survivor Series. Check them out: