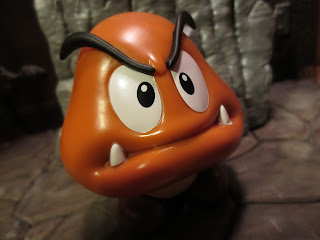 A month or so ago I walked into my local Toys 'R Us and found the remainder of series 3 of Jakks Pacific's World of Nintendo line. While I managed to find a Princess Peach (my most wanted figure from this series) the Goomba and Star Fox were long gone. A couple of weeks later I walked back in the same store and, lo and behold, they had restocked and I was able to snag both the Goomba and Fox McCloud. Today I'm looking at the Goomba, one of Mario's oldest foes. Seriously, if you're around my age (early 30s) then the Goomba may have very well been the first enemy you killed in a videogame. It certainly was for me. Based on the appearance of a shitake mushroom, the Goomba is without a doubt one of the most iconic videogame villains of all time. Ready to jump in and smash this guy up? Then join me after the break... 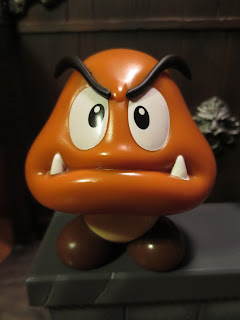 Accessories: Cardboard "?" box and a coin. 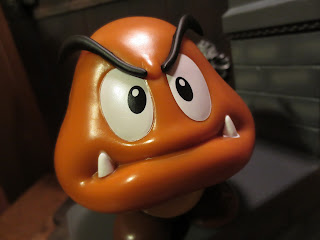 * This guy looks like the Goomba that you know and love! The big eyes, a bulldog like expression with little fans, and arched eyebrows are all present. The coloring is really good, too. Jakks has done a nice job of bringing these Nintendo characters to life in three dimensional form and the Goomba is definitely on of my favorite sculpts in this line yet. 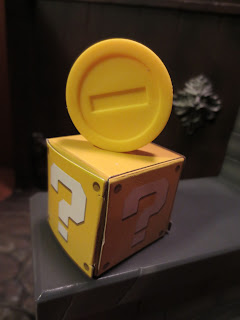 * Every basic figure in this line comes with a mystery accessory sealed in a cardboard box. While some have been very character specific (Link's shield, Yoshi's egg, etc.) others are a more generic item from the character's respective videogame series. A few figures so far have come with one of the golden coins that Mario and Luigi collect, so it's not much of a surprise that the Goomba comes with another one. It's a cool extra, though, and you can't really have enough coins. 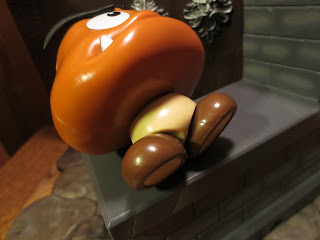 *One of the things you'll definitely notice about this figure is that it's pretty static. The feet are pretty limited in swiveling around and waist/neck only swivels. This guy really just stands in place. That's it. It's kind of disappointing but, then again, what else could a Goomba really do? 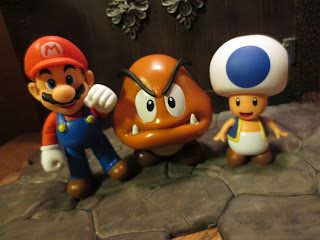 Some collectors often like to hyperbolically say that an action figure they dislike reminds them of a McDonald's toy. In this instance, it's not really much of a stress. This guy is what he is. He's a very simple, hollow plastic figure with minimal articulation. He also is a spot on likeness of a Goomba. If you're collecting this line, odds are you're probably OK with that. There are some figures in this line that are really good values and others that aren't. The Goomba is an overly simple figure, but one that I really wanted. I really like him, but he's an Eh and a 1/2 figure at best.

I've reviewed a number of figures from this line, including: