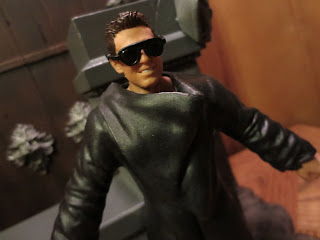 Today I'm looking at another figure from series 37 of Mattel's WWE Elite Collection: The Miz! The Miz is the ultimate A-list celebrity, starring in Hollywood blockbusters such as The Marine 3: Homefront, The Marine 4: Moving Target, and the upcoming Star Wars: The Force Awakens! Just kidding. He's actually going to be in the film Santa's Little Helper. While he's not really box office gold, Miz does have a great gimmick going on right now. This figure is supposed to represent his attire at Night of Champions 2014 shortly after he adopted the A-list celebrity persona. While he's definitely a heel, I've found Miz to be pretty entertaining over the past year, particularly when he's hosting Miz TV. Ready for a closer look at the Miz? Then join me after the break... 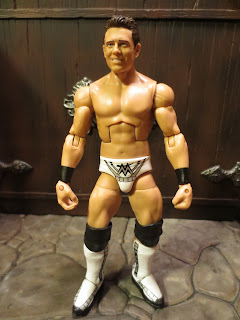 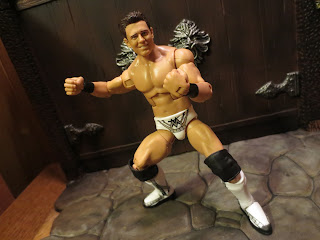 * So far, I haven't purchased one figure from the WWE Elite Collection that hasn't been fun and durable. These are great, solid action figures and they really make excellent "hand candy." I'm someone who just likes to play around with an action figure while I'm watching TV or a movie and these figures fit that bill perfectly. 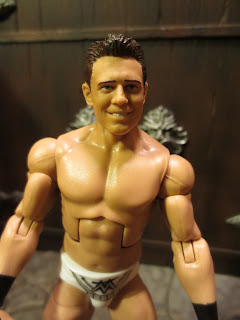 * This is a really good headsculpt of The Miz. It really looks quite a bit like him and has kind of a goofy smile. It's definitely more of a look he'd give at one of his movie premieres or for a press photo then one commonly seen in the ring (as he's a bit of a narcissistic jerk there) but it works, particularly given the ring gear he comes with. 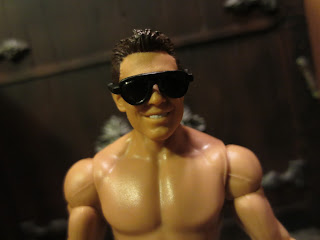 * Yeah, I know these sunglasses look flipping huge. I still kind of like them. Two reasons: First, they fit really well. They're tight and don't feel like they'll fall off at the slightest breeze. Secondly, I think the big sunglasses make sense for a movie star. They look ridiculously over-sized, as if they're intended to help the Miz keep his privacy. 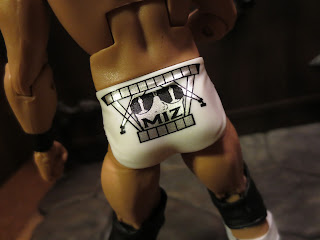 * To show off his status as a Hollywood A-lister, the Miz wears some white trunks with an inverted WWE logo on the front (now an "M", standing for "Miz") and some Hollywood iconography on the pack. There's some sunglasses, Oscar looking statues, and spotlights like you'd see outside of a big Hollywood premiere. The paint work is really clean on these and the printing is incredibly straight. 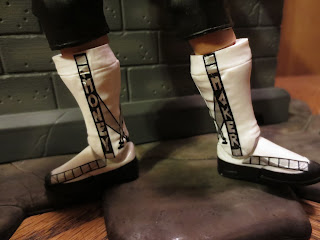 * The boots are also pretty cool, too. The interior side of the right boot says "Money" while the interior of the left boot says "Maker." Again, for being a mixture of white, silver, and black paint, these turned out extremely clean. Mattel seems to do really well with the paint apps and tampographic stamps on the WWE lines. You can also see that Miz has some actual knee pads over his legs. 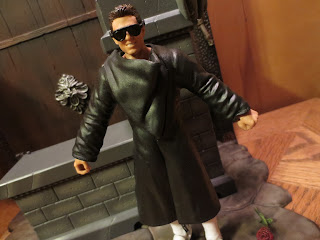 *Part of his gimmick is that Miz wears some very fancy looking jackets and scarves into the ring. This coat was definitely on he wore but, unfortunately, it's rendered here in a very stiff plastic. Once again, while I know some folks hate cloth outfits on action figures I think cloth would have both looked better here. It definitely would have been more functional as Miz's arms are stuck out at bizarre angles. 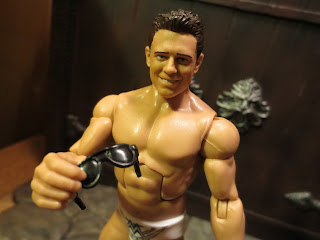 The Miz is another solid entry in series 37 of the WWE Elite Collection. I like the figure itself as it's as high quality as anything else in the line. The jacket is a little disappointing, though. It looks awkward on the figure and really hinders hos movement. I do wish Mattel had attempted a cloth robe here versus the rubbery plastic they went with. The Miz is still a pretty good figure, though. I'd even say Good and a 1/2.

I've reviewed a number of WWE Elite figures and have plenty more coming up. Check out my reviews of: