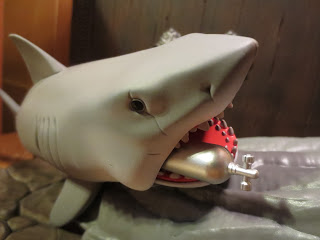 The packaging calls him "Great White Shark" but we all know that this is Jaws. Or Bruce the Shark, if you so desire. Haven't I already reviewed this figure? Well, kind of: You see, I reviewed the SDCC 2015 Great White Shark and Quint Final Battle set last month as part of 31 Days of Toy Terror. While this figure is exactly the same mold as the shark in that set, the paint job is different. Oh, and there's a different accessory. Besides, can you ever have too many sharks? Grab yourself a bigger boat and come take a closer look at the Funko ReActon Jaws figure right after the break... 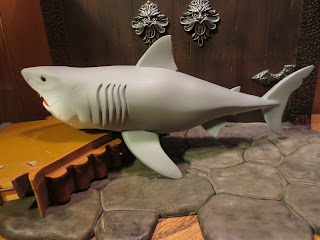 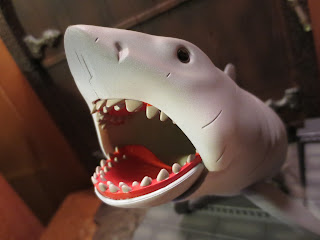 * I love the articulated jaw on Jaws! The SDCC exclusive figure had a jaw that was a bit loose but this one is nice and tight. You could actually fit a whole ReAction figure inside of the shark's belly if you wanted to. And look at all of those teeth! They're actually kind of pointy and sharp! 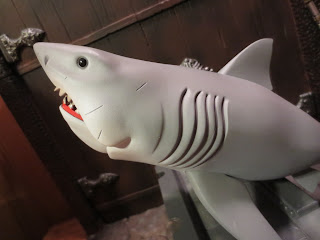 * I just love how terrifying this figure looks! I know when the license was first announced for ReAction some people were anticipating that we'd be getting a rubbery, dollar store quality toy to represent Jaws (since that seems exactly like what a company might have done to cash in back in the day). This is a masterpiece, though, and features excellent sculpting, lots of detailed scars, and a nice, subtle paint job. Bruce the Shark is incredibly terrifying if you ask me. 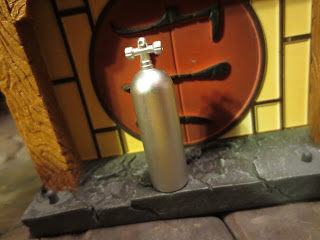 * I have to admit that I was incredibly excited to see that an accessory came with this figure. I didn't realize that I'd be getting the pressurized oxygen tank that was finally used to kill Jaws in the film. It's a simple silver plastic piece, but it looks awesome wedged in Jaws' jaws. Little stuff like this just makes my day. 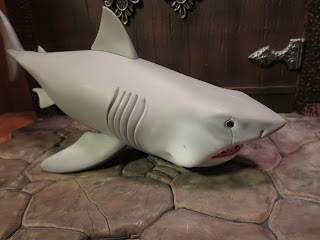 *The only problem I have with Jaws here is that he really can't stand. His front end is much heavier than his tail end and so when you sit him down he flops forward. I really wish Funko had weighted down the rear of the shark to help him display better. As you can see in some of the pictures, I used random objects to keep him up during the photo shoot.

For $15 dollars, Jaws is a heck of a toy. This has been a reall popular toyline this year and I'm glad that the Great White Shark himself didn't disappoint. The only thing that still irks me is how he tends to flop forward when you try to display him. Other than that, I love everything: The sculpt, the paint, the scuba tank, and the ability to eat smaller action figures. This might be the best shark toy ever made. Not that there are many of those. I'm giving Jaws here a Great and a 1/2 rating. While I love the bloody mouth of the SDCC exclusive, I think I may actually like this one a little more.