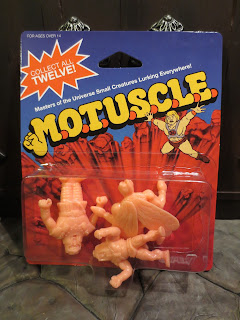 I'm still making my way through the first series of M.O.T.U.S.C.L.E. figures, the new Masters of the Universe and M.U.S.C.L.E. mash-up line from Super 7. Over the past few years we have seen an upswing in the number of retro inspired minifigure lines paying homage to Kinnikuman, M.U.S.C.L.E., Monster in my Pocket, and the other great minifigure lines of the 80's and 90's. Super 7 has officially stepped into the ring, attempting to marry the characters of MOTU with the style of M.U.S.C.L.E. While I have some problems with the execution I can't help but love the spirit of this awesome 80's amalgamation. Today I'm looking at the set of three figures which includes Ram-Man, Man-E-Faces, and Buzz-Off. While Ram-Man and Man-E-Faces were second year MOTU characters, Buzz-Off was from the third year of the line. Hopefully Stratos and Zodac, both first year figures, will make it into a future series! Ready for a closer look at these guys? Then join me after the break... 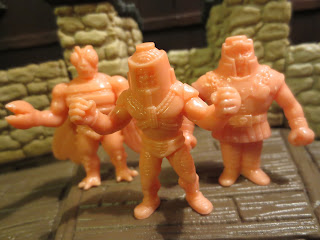 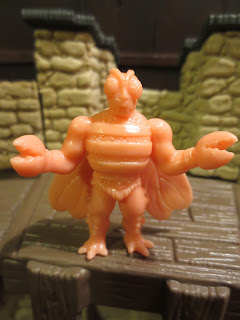 *Buzz-Off really has the size and style to fit in well with the M.U.S.C.L.E. crew. Again, I must reiterate that Super 7 did an excellent job of sculpting these characters in such a small scale. The texture detail on Buzz-Off's torso and wings are incredible. I'd love to see Buzz-Off re-released in yellow plastic! The way his claws are spread out really gives him a battle ready look! 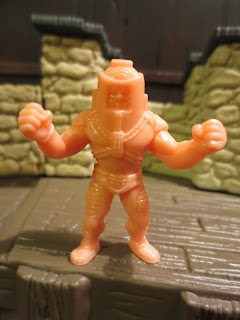 *Man-E-Faces also looks like he's ready for battle! The excellent detail is faithful to the character's vintage outfit and if you look inside of his helmet you can see that he's utilizing one of his alternate heads. I kind of wish Man-E-Faces included his pistol but he looks more like a wrestler here, so maybe that's what Super 7 was going for. 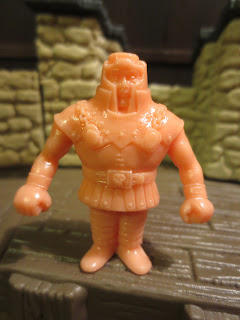 *Ram Man is one of my personal favorites and I'm amazed by how intricate the sculpt  is. here The chains on his shoulder armor, the armored panels on his tunic, and the skull belt buckle are quite incredible. He's nice and bulky, too, and looks like he would fit right in with the vintage M.U.S.C.L.E. figures. 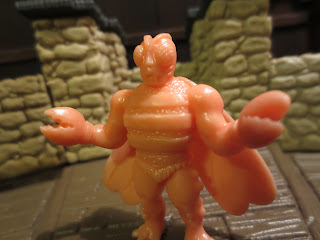 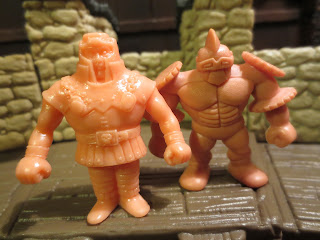 * While the last two sets of these I've reviewed
have had proportions that didn't quite match up with what I expect from M.U.S.C.L.E. figures, I think the characters in this set just work a lot better. Ram Man and Buzz-Off especially have the bulk and heftiness of the M.U.S.C.L.E. crew. 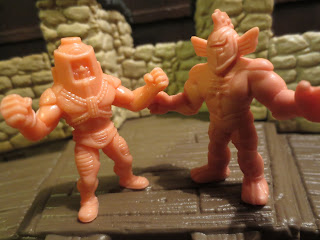 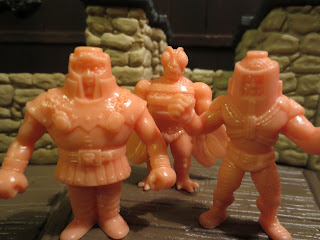 I like these guys. I really do! I just wish that Super 7 would consider making some changes in the future. The color isn't quite right (it's closer to the bootleg M.U.S.C.L.E. figures you could find in vending machines) and the plastic is too rubbery. On some of the figures the proportions aren't right, either, but I feel like these three guys turned out much better. Since these seek to emulate vintage toys, I feel it's completely justified that Super 7 continue to work on more closely capturing the aesthetics of true M.U.S.C.L.E. figures. These are fun and I'm sure minifigure and MOTU fans will enjoy them, but they still need some work to hang with the big boys. Overall I'm giving them a Good 1/2 rating!

I've reviewed the He-Man, Teela, and Man-At-Arms and Skeletor, Beast Man, and Trap Jaw sets, as well as plenty of MOTUC figures: