Action Figure Review: Nightwing from The New 52 by DC Collectibles 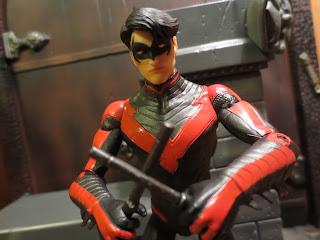 While the New 52 is no more (even though the continuity it set up is still in order for the most part), that doesn't mean that we can't keep playing with the various toys it spawned! Last year saw the release of two versions of Nightwing in his red and black New 52 outfit: This version and a version from the Greg Capullo inspired line. Lately many of the New 52 branded figures have gone on sale at a number of e-tailers and I've been picking up ones I've missed. While I grabbed Red Hood, Red Robin, and Batgirl last year as soon as they came out, I didn't grab Nightwing. I finally did a week or so ago when I saw him for $12 and now I'm getting a chance to review him. Ready for a closer look at Dick Grayson in his Nightwing costume (which he's now abandoned as an agent of Spyral)? Then join me after the break... 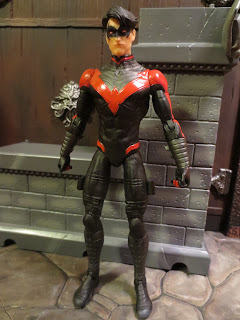 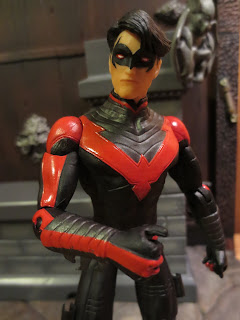 *The sculpt is good, but that's typically the case with DC Collectibles. While the portrait isn't mindblowing or anything, the costume itself is extremely detailed and features a few different textures to emulate the various materials on Nightwing's costume. While there is a Nightwing figure in the Greg Capullo inspired line based on Capullo's artwork, this Nightwing somewhat resembles Eddy Barrows' work on Nightwing's own title without being overly artist specific. 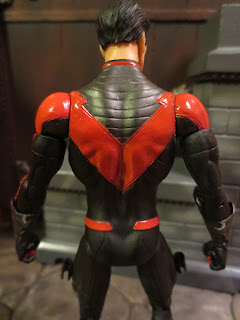 * I really like Nightwing's red and black color scheme. I've always liked the blue as well (as it helped to distance him from the Robin costume and persona) but he red is very sharp and looks fantastic both on paper and on an action figure. It's interesting that in the New 52 Dick Grayson, Tim Drake (Red Robin), Jason Todd (Red Hood), and Damien Wayne (Robin) all use red significantly in their costumes.

For the most part here the paint is clean and sharp (I love the red eyes under the domino mask) and the more armored parts of the outfit have a nice sheen to them. 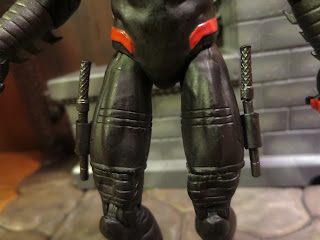 * One really cool detail about this figure I love is that Nightwing has storage clips for his Eskrima sticks on his thighs. They're small, unobtrusive, and securely hold the sticks in place. It's a neat little extra that I definitely appreciate. 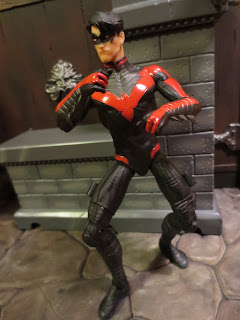 *DC Collectibles jumps back and forth on their articulation with some characters being ratherlimited and others having a full complement of useful joints. Nightwing is right in the middle, which is a bit disappointing for a character as agile as Dick Grayson. He just feels incredibly stiff. Hips hips don't have a lot of motion and he has no articulation on his torso or waist. Incredibly disappointing for a trapeze artist, don't you think? 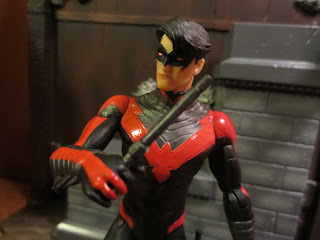 * While Nightwing comes with his signature Eskrima sticks, they're very underwhelming. They seem a bit too small, feel rather fragile and brittle, and just don't look very impressive. I really wish they were a bit sturdier and perhaps had attachments that mimicked the electricity that can emanate from the sticks in the comics. 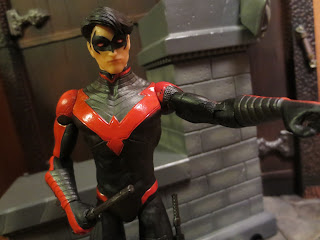 All things considered, Nightwing is a pretty average figure for DC Collectibles. He's not really technically flawed as he feels sturdy and has nice quality control. He also looks pretty good with nice sculpting and solid, clean paintwork that really stands out. It's the weak accessories and the limited articulation that makes him feel so underwhelming. He's a Good figure but really only worth picking up if you're a huge fan of the character or want to assemble the Bat-family. Speaking of the Bat-family, when do you think we'll get another Batwoman figure? I finally just purchased the 52 Version but Kate Kane is in desperate need of an update! Get on that, DC Collectibles!

Oddly enough, the only other Nightwing  figure I have reviewed is from Kenner's Legends of Batman line.
Posted by Barbecue17 at 8/14/2015