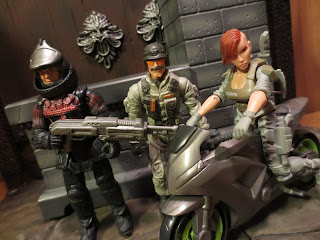 Admit it: As a kid you had some members of the Corps mixed in with your G.I. Joes. Don't try to deny it! While you might like to brag about your collecting purity and how you don't mix lines, there were some figures from Lanard's The Corps that just fit in too well with the Joe team, Cobra, or the Dreadnoks. While the Corps and G.I. Joe have really went their separate ways, lately many fans have been giving a more watchful eye to some of the cool figures Lanard is putting out on shelves. With G.I. Joe largely missing from retail (someone please help Hasbro) the Corps stands prepared to give 1/18th scale collectors something fun to snag on toy shelves. While I don't usually go on and on about price I feel that this review warrants it: This 3 pack of figures plus a motorcycle costs around $6-$7. Let me say that again: $6-$7. Name me one action figure that you can buy these days for that price. I'm not sure how Lanard is magically doing this but somehow they have figures out retail distribution and managed to get costs under control better than any of their competitors. Want to check out this three pack of Ogre, Buckshot, and Snake Bite? Then join me after the break... 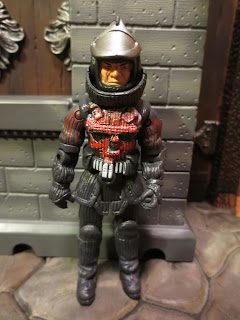 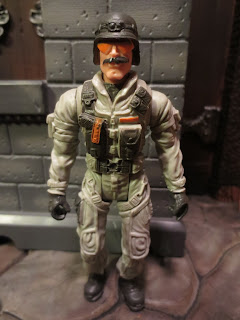 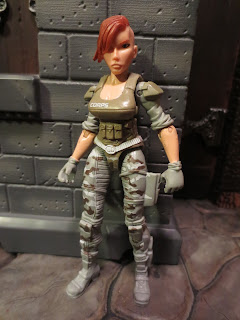 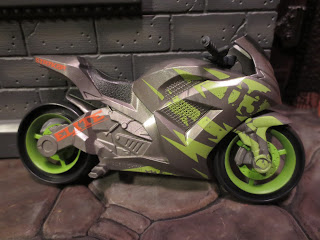 *This set not only comes with three figures but also includes a motorcycle. It's fairly simple but looks great and has a cool, colorful paintjob. The wheels roll and Snake Bite looks awesome on it. 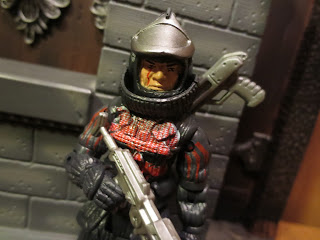 * I love Ogre. He's a demolitions specialist that looks like he'd be right at home as a member of Cobra or as a villain in a Metal Gear videogame. His bulky, padded explosives suit looks really cool and has some wicked paint apps on it. I love the red and white skull on his torso. 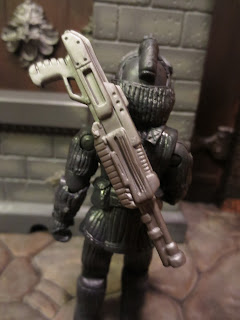 * Ogre comes with a spear gun and a massive shotgun. It's tough to get the shotgun in his hands (as it's a little too large) but it looks cool and fits nicely on his back via a peg. I'm all about shotguns and I love this sculpt. 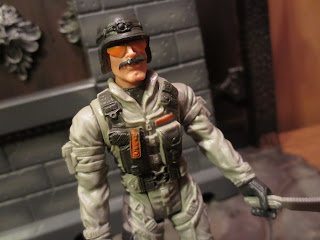 *Buckshot is apparently a reused figure from a previous set but he's not bad. He's a decent looking pilot and has lots of little pouches and straps on his torso. 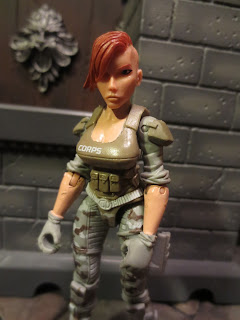 * The main reason to buy this set is Snake Bite. She's an awesome looking soldier who is one of the first females to ever appear in The Corps. She has a very cool punkish haircut, some interesting body armor, and a great camouflage pattern. She'd pair really well with the Joe team. 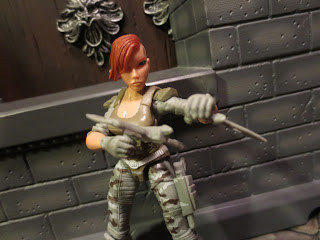 * Snake Bite's articulation is pretty good. It's not as extensive as you'd see on a modern G.I. Joe figure but it still gets the job done. She can easily use her weapons and ride the motorcycle included in the package. 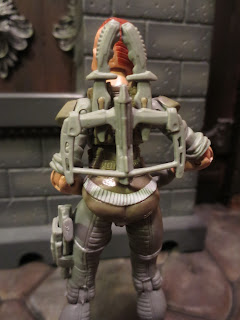 * My favorite thing about Snake Bite is that she can hold all of her accessories. Her suppressed pistol fits in the holster on her left hip, her combat knives attach to pegs on her back, and the crossbow fits in a peg on her back. These weapons are all really cool sculpts and the fact that she can tote them all around (while having her hands free to break the bad guys' necks or ride the motorcycle) just makes it all the sweeter. 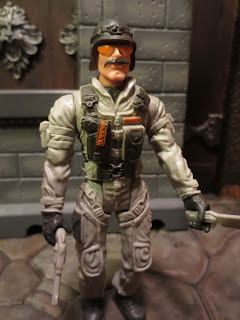 *It's a little odd that different figures in the same pack have such radically different articulation. While Ogre is less articulated than Snake Bite, Buckshot only has five points of articulation overall. He's also in an awkward stepping pose. 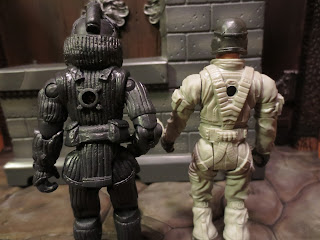 * Remember that episode of Family Guy where Peter buys a car that only has a picture of an engine in it? That's the kind of feeling I get when I buy an action figure that isn't painted on the back. It feels like the company is intentionally trying to cheat me! Playmates does this quite ofte with TMNT and Lanard has done it here with Ogre and Buckshot. By the way, shouldn't Buckshot use the shotgun? Wouldn't that make more sense? 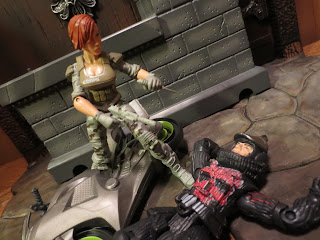 Yeah, these figures are a mixed bag. The sculpts are nice, the weapons are fun, the paint is back and forth, and the articulation is a real mixed bag. Guess what? THREE FIGURES AND A MOTORCYCLE FOR $6 BUCKS. These aren't cheap, dollar store toys, either. These things are as durable as anything else I've bought this year form Hasbro, Playmates, or Mattel. I doubt most collectors are going to go for these but if you're actually buying toys for a real life child you know or just want to pick up some hand candy for your desk, you can't go wrong with these guys. This is a Good and a 1/2 set of figures (although Snake Bite herself is easily a Great and a 1/2 figure on her own) and definitely should make you question exactly what Lanard is doing right that other companies just can't seem to get a handle on.