Action Figure Review: Callix from Masters of the Universe Classics by Mattel 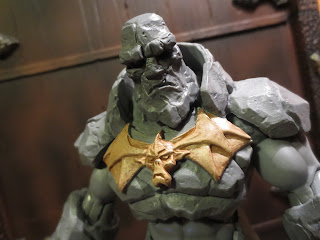 Fans of the Mike Young Productions Masters of the Universe cartoon and the accompanying toyline had a rough time with Masters of the Universe Classics for a few years. At some point between 2010 and 2011 former brand manager Scott "ToyGuru" Neitlich made a big deal about Mattel's corporate directives to eliminate all traces of the "hyper anime detail" look of the 200x line. While we still got some characters that originated in that era (Count Marzo and Chief Carnivus come to mind) it wouldn't be until this year that 200x fans got an entire subscription to themselves. The Club 200x subscription just sent out it's first monthly figure, Callix, in July. Who is Callix? He's a rock dude that appeared in one episode and was killed shortly after he first appeared. Of course, being a new member of the Horde and all, fans latched onto the character. Long story short, we now have Callix. And he rocks. Rocks. Get it? Anyways, check him out after the break... 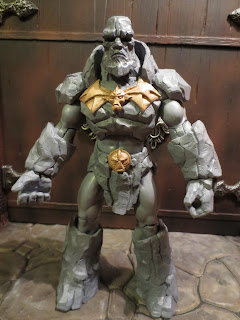 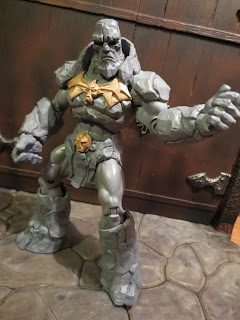 * By and large Callix has the same great, sturdy articulation that most other MOTUC figures have. The only thing he's missing are ankle hinges. Due to the new stone feet he's a bit more limited in his movement. Of course, these also help to make him a bit larger than other figures, which is quite cool. 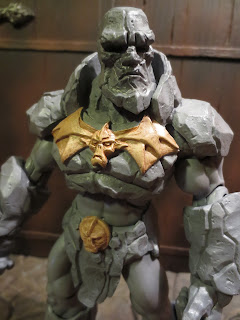 * This sculpt is awesome! Seriously, Callix is one of the best looking MOTUC figures I've seen. He really looks like he's made out of rocks or is a living statue. The headsculpt is incredible and really gives him a fearful, stern demeanor. The Horde emblems on his chest and belt buckle nicely tie him in with the Horde despite not having a typical Horde color scheme. 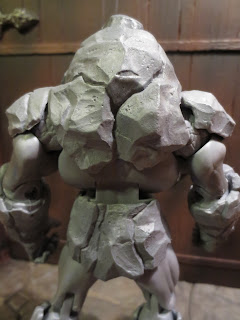 *I really like how Mattel handled Callix's design. To give him a bulky, rocky look they utilized a number of overlays that augment the standard body sculpt. These really look good and help him to still fit in with the general aesthetic of the line while still allowing him his own unique vibe. This really turned out great. 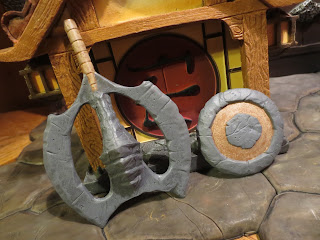 * I love Callix's ax and shield/1 They're both cast and painted to mimic his own color scheme and feature some great sculpting. The ax looks really, really brutal and definitely makes Callix appear like a tank for the Horde. The shield is a tad small and almost seems a bit funny being wielded by a guy made of stone. Still, it does look cool with him. 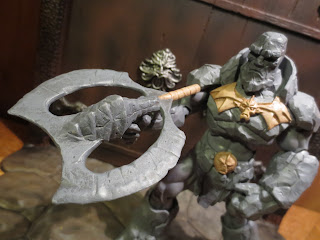 * Since most of the members of the Horde utilized a crossbow of some sort, Callix comes with one too. It's his ax! It has a handle on the bottom so that he can hold it like a crossbow. It looks pretty cool, although I have seen folks point it with the ax handle towards from Callix (as the back of the crossbow) and away from Callix (as a barrel or arrow of some sort). I think it looks better with the ax handle facing Callix. 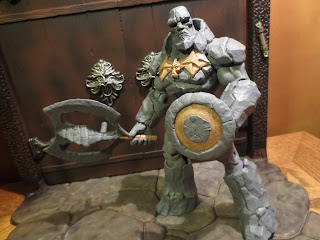 *I really don't have any. I guess I would have liked more motion in the ankles, but it's not really that big of a deal. 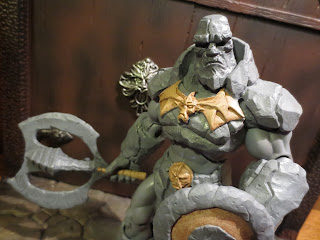 Callix has definitely jumped up on my list as my favorite MOTUC figure of 2015 so far. While we've got almost half of the year still to go I can't help but feel like Callix will be a tough guy to beat. I just love how amazing and brutal he looks! This is a guy who tonally feels like he belongs in the earliest, barbarian filled era of Masters of the Universe lore. Callix is an Epic figure and definitely a highlight of 2015 so far! If you can, pick him up as soon as possible. He's a fan favorite and may prove to be more difficult to find over time.

I've reviewed a ton of MOTUC figures here, including: