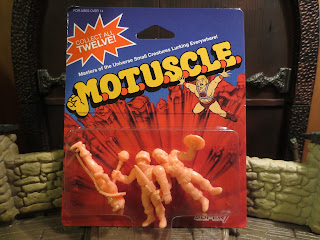 One of the coolest things that popped up at SDCC 2015 was Super 7's Masters of the Universe and M.U.S.C.L.E. mash-up series M.O.T.U.S.C.L.E. The premise is simple: Take the beefed up Masters of the Universe characters and release them in the traditional M.U.S.C.L.E. style. M.U.S.C.L.E. is one of my favorite toylines ever (I love minifigures) as is MOTU, so this was a match that was right up my alley. I purchased these directly from Super 7's website and while they're sold out as of the writing of this article, they're supposed to continue releasing these. The packaging art featuring the red exploding rocks over a blue background is perfectly vintage MOTU while the style of the card and blister with the leaping He-Man is pure M.U.S.C.L.E. (M.U.S.C.L.E. and MOTU are both Mattel properties, so it's all good!). Each set comes with three figures and today I'm looking at the set which includes He-Man, Teela, and Man-At-Arms. Ready for a closer look? Then join me after the break... 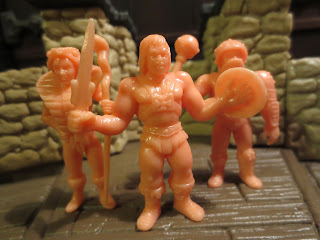 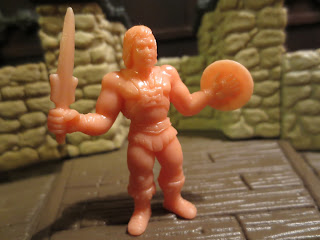 * These figures are clearly based on the vintage toyline rather than the Filmation cartoon or the Masters of the Universe Classics line. He-Man has his power sword and shield out and ready for battle! The sword is a bit odd looking but the detail on his shoes, boots, and harness are quite nice. 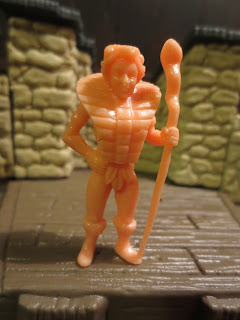 *Teela is decked out in her serpent battle armor and is wielding her serpent staff (AKA the staff of Ka). If you consider these official M.U.S.C.L.E. figures (since Mattel licensed them out) then, as far as I'm aware, Teela is the first female M.U.S.C.L.E. I was a bit concerned that her staff would be brittle or bent but it seems to be just fine. 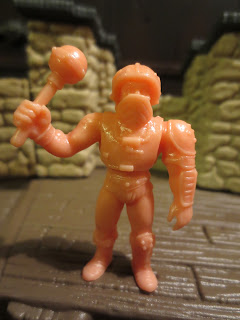 *Man-At-Arms looks fantastic and very M.U.S.C.U.L.ar. The details on his armor are quite crisp and sharp for the scale. The way his arm is positioned too with his mace held high definitely works for mimicking the original little pink rubber wrestlers. I like the decision to make his "mask" higher to cover more of his face, too. It gives him a bit more of a mysterious aura. 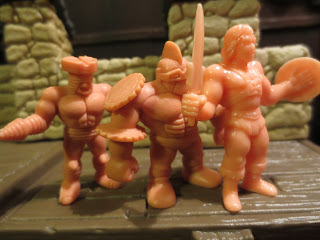 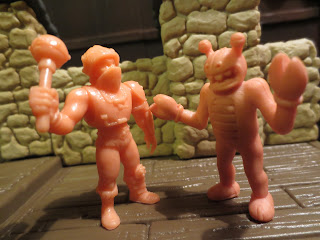 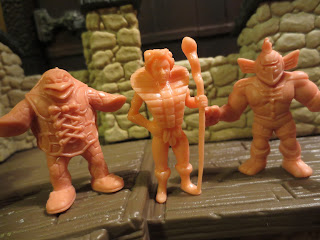 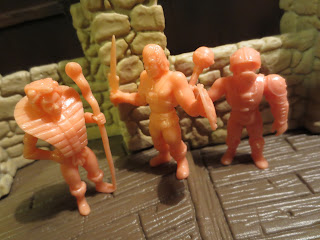 I like these guys. I really do! I just wish that Super 7 would consider making some changes in the future. The color isn't quite right (it's closer to the bootleg M.U.S.C.L.E. figures you could find in vending machines), the plastic is too rubbery, and the proportions aren't right. Since these seek to emulate vintage toys, I feel it's completely justified that Super 7 continue to work on capturing the aesthetics of true M.U.S.C.L.E. figures. These are fun and I'm sure minifigure and MOTU fans will enjoy them, but they still need some work to hang with the big boys. Overall I'm giving them a Good rating.