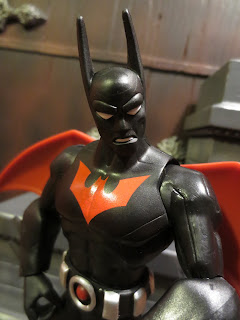 I'm not sure what the problem is but Mattel just doesn't seem like they can keep their kid focused DC lines going. Take Total Heroes: It's supposed to be a kid friendly, under $10 DC Comics based line. Did stores even stock these? I saw one or two sitting around every now and then but it didn't seem like Mattel really pushed the line at all. While Hasbro's Marvel Superhero Mashers are going strong, Mattel can't even seem to really sell a Batman line. While fans really showed a lot of hate for this line early on (it kind of took the place of the various DC/ Batman Unlimited lines) overtime they seem to have just forgotten about it (as did Mattel). The figures weren't bad but there wasn't much variety. The most exciting things to come out of the line were from the Total Heroes Ultra subset: Multiple heads, piles of cool accessories, and some great character choices. Guess where these were sold? Only on Mattycollector, because you know that's where the kiddies shop. Anyways, when I picked up my SDCC Exclusive Rotar and Twistoid I also grabbed this Batman Begins set. The only Batman Begins figures I own are the two from DC Universe Classics so I wanted to add another. This is a cool set and is definitely worth checking out regardless of your thoughts on the Total Heroes line. Want a closer look at the Batman of the Future? Then join me after the break... 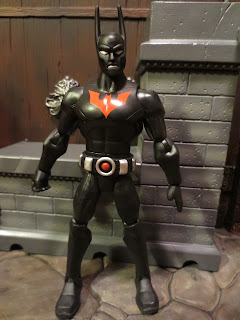 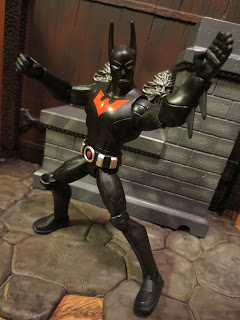 
*While he's not as articulated as your average Marvel Legends or DC Universe Classics figure, the articulation is well above many of the toys on the mass market shelves today. The head and arms have a fair range of motion and the legs aren't terrible, either. Everything feels sturdy and well put together. 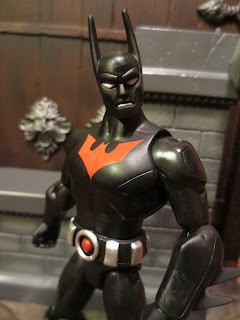 * The Batman Beyond batsuit doesn't look bad in this style. It's not as sleek as some fans might expect, but it does fit the Total Heroes aesthetic. The Batman head looks really nice; I love the ferocity that such a simple mask projects. The belt and gauntlet blades are perfect and nicely capture the unique aspects of this particular batsuit. 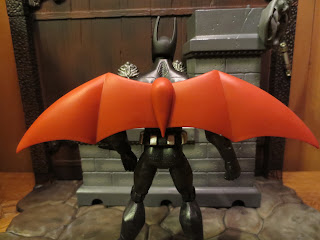 *It's not a perfect match to the source material but I do like that Terry/Bruce comes with an optional glider back. We never got one in DC Universe Classics. The piece is rather plain but the plastic is sturdy and does a nice job of snapping on securely. 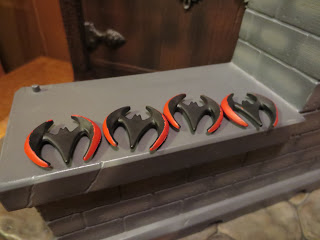 *Batman comes with four Batarangs! Four! Typically I'd expect Mattel to call a Batman figure with one Batarang "Deluxe" so I'm amazed we got four. These are really nice and feature red highlights to boot. Schnazzy! 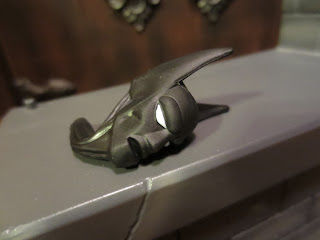 * Want to depict Bruce or Terry just casually hanging around? Then give them this Batman mask. It fits in their hands and looks like a rubbery mask just dangling around. It's a really cool accessory. 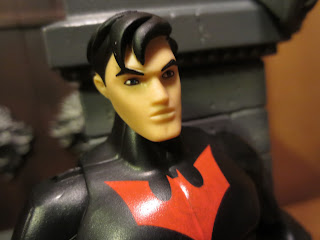 *Of course, if you want to use the rubber mask piece you need to have an unmasked head. First up is the most well known wearer of this suit, Mr. Terry McGinnis. This is a pretty nice stylized headsculpt of Terry that fits in well with the aesthetic of the line. The heads easily swap on and off. 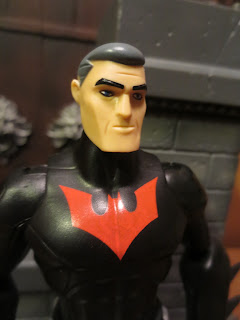 * My favorite headsculpt, however, is the aged Bruce Wayne headsculpt. This is not the old Bruce Wayne who mentors Terry but the aging Bruce Wayne of the show's pilot episode. It's a really cool headsculpt to have and captures the feel of the animated series' Bruce Wayne design. 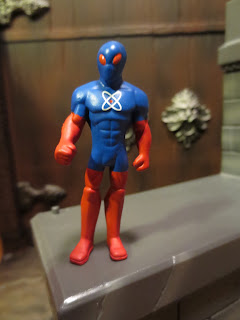 *While I wish we'd gotten Ace instead, the set does come with a cool minifigure of Micron, the successor to the Atom in the future Justice League. Micron stands around 2 1/4 inches tall. Micron is not articulated but does have an excellent paint job. 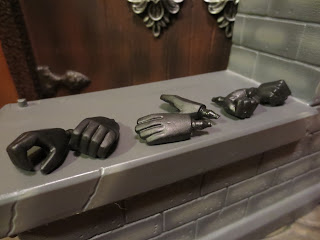 *I really like that this figure comes with three sets of interchangeable hands. Unfortunately, they fall off really easily. Simply moving the figure or putting an accessory in Batman's hand is enough to cause one of the wrists to pop out of the socket. I'm not sure if it's that the holes are too large or the pegs too small (maybe both!) but I'm really disappointed. 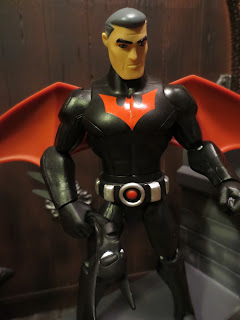 I love this set. My only real complaint is the hands coming loose, which can be rectified with a bit of glue or something to build up the pegs. For $20 this set is actually quite a bargain considering all of the cool stuff you get with it (and how often can you call anything sold on MattyCollector a bargain?). What's sad is that Total Heroes seems to have faded away. A set like this is what should have been on retail shelves. There's so much awesomeness and play value here and the card art is really cool and captivating. This is a Great set; it's just too bad that the target audience never got a chance to beg their parents for this at retail!


I also reviewed the Total Heroes Batman way back in early 2014, along with plenty of other Batman figures:

Young Justice: Invasion by Mattel
Batman
Posted by Barbecue17 at 8/19/2015