Minifigure Review: Purple Skeletor and Skeletoken from M.O.T.U.S.C.L.E. by Super7 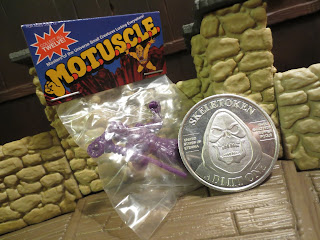 Over the past four days I've reviewed all four sets of figures from the new M.O.T.U.S.C.L.E. line by Super7. When I ordered my four packs of figures I wasn't expecting to get anything special in return. I was absolutely amazed when I opened my box and found the SDCC exclusive purple Skeletor with the Skeletoken and the postcard/ flyer for the promotion. At SDCC 2015 there was a very cool promotion where you were supposed to gather one of these special Skeletokens and use them to access a secret location nearby (I believe at Super7's store). After SDCC I had looked on Ebay and saw these Skeletor figures selling for some very high prices, thus I became content with never owning one. I was amazed that Super7 sent him out to me for free along with my order! What a cool thing to do for folks picking this set up! Want a short but closer look? Then join me after the break... 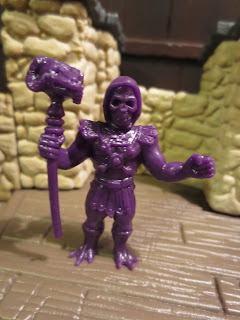 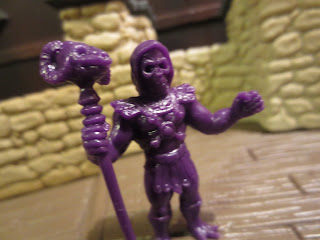 This is the same great Skeletor sculpt from the basic line. It's quite well detailed, has a great M.U.S.C.L.E.ish pose, and looks fabulous in purple. I think the color really helps tone down the too shiny look that the basic figures have. I really wish this toy were a grape flavored gummy that I could eat. If it tasted like grape Bonkers, I'd be amazed! 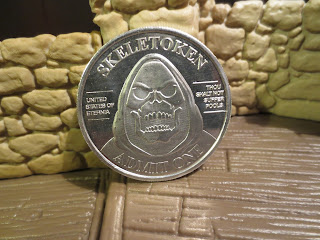 *The coin is a really fun extra. It's definitely a unique Masters of the Universe collectible. I find it ironic that it says "Thou shalt not suffer fools" on the front, however. In the Filmation series, basically everyone Skeletor hung out with was a fool. 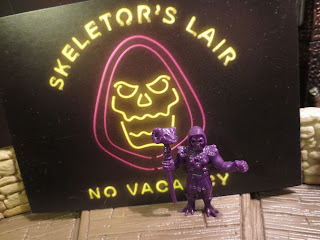 Consider this less of a "review" and more of a quick peak at a cool collectible. It's a neat little item and easily gets an Epic rating from me simply because it was such a cool little extra from the company. There are a few companies who seem to throw out little bones to their fans and it's nice to know that Super7 is one of those companies (other ones that I can think of are October Toys, Fantastic Plastic Toys, and Marauders, Inc.).

For the full rundown on this line, check out my other reviews of the series as well as all of my MOTUC reviews: