Action Figure Review: Rotar and Twistoid from Masters of the Universe Classics by Mattel 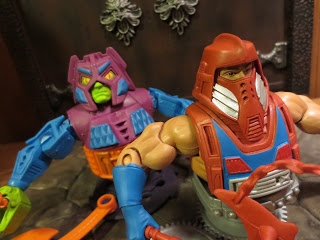 In 1987 as the Masters of the Universe line was winding down, Mattel was trying everything to stay relevant. Besides attempting to strong-arm retailers to carry other MOTU products in order to earn the privilege of selling MOTU figures, Mattel was also trying out a number of gimmick figures. One of these ideas led to the creation of Rotar and Twistoid, the Energy Zoids. Essentially some form of battle tops, Rotar and Twistoid ended up being pretty obscure figures. Many fans, myself included, don't even seem to remember them from back in the day. Only after getting back into MOTU thanks to Masters of the Universe Classics did I discover these two. Since 2015 is all about finishing up the vintage line of action figures we knew these two would be coming. They made their appearance as as a set of SDCC 2015 exclusives that were also sold on Matty's own website. Ready for a look at the Rotar and Twistoid, the Energy Zoids? Then join me after the break... 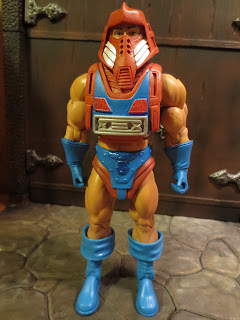 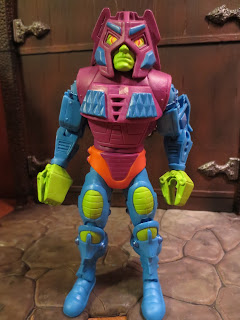 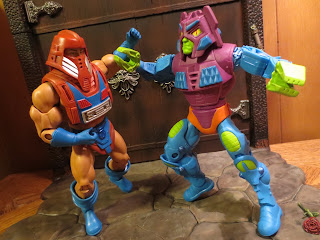 *Thanks to the inclusion of legs (which the vintage figures definitely did not have) Rotar and Twistoid are as well articulated as any other MOTUC figure. They feel extremely durable and are incredibly fun looking characters when engaged in battle! 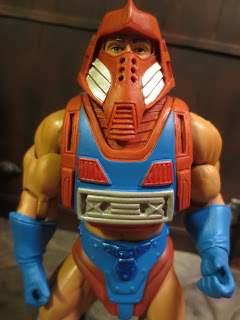 * The vintage Energy Zoids were really strange looking figures, particularly Rotar. While Twistoid was monstrous and thus his proportions really didn't matter as much, Rotar appeared to be human. This really made him seem awkward as the figure was much bulkier and rounder than expected. This new figure, however, looks perfectly human and well proportioned. I love his helmet and armor: He looks like a mixture between Ram-Man and Man-E-Faces and feels like he would fit in well with the earliest years of the line. 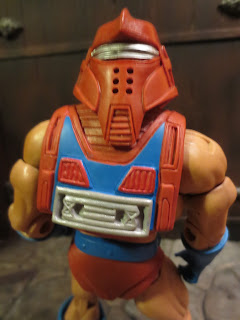 *Something really cool about this figure is that Rota's helmet looks nearly identical on the back with the exception of a visor pulled down. Is the intention that you can flip the head around and make it appear is if Rotar has pulled down a visor for battle? His armor isn't removable but it's attached well and seems fittingly sized for an Eternian warrior. 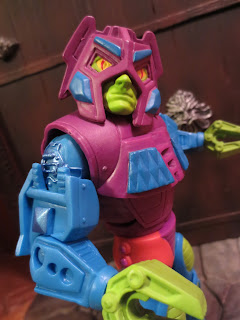 *Twistoid is the bad guy and appears to be a robot with a human like mouth. He's actually pretty cool looking an has an amazing color scheme. I love the combination of green, purple, and blue. His arms are incredible and have some extremely cool claws that help hold his weapon. 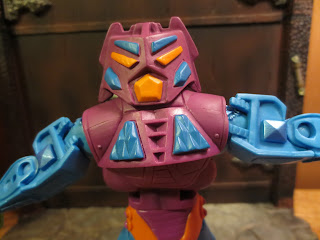 *Twistoid also looks like he has a double sided helmet. I don't know about you but I'm really getting a Jack Kirby vibe when I look at these guys. They look like they definitely could have stepped off the pages of one of Kirby's New Gods books! 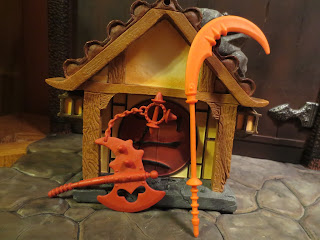 * This set comes with a lot of extra pieces and first up are the signature melee weapons for Rotar and Twistoid. Rotar has his battle ax with a flail on the back while Twistoid has a long scythe. I really like both of these weapons, even if they're a bit over exaggerated. They're nice and solid and fit well in the figures hands. 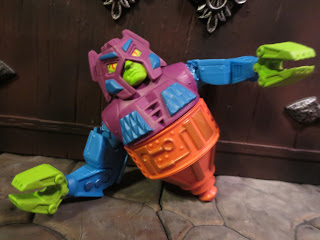 * In order to replicate what these figures actually looked like in the vintage line, both Twistoid and Rotar have removable legs. Just like King Hsss, the figure separates at the waist and can rest in the appropriate base. There's some nice sculpting and paintwork that helps to capture the feel of the vintage toys. 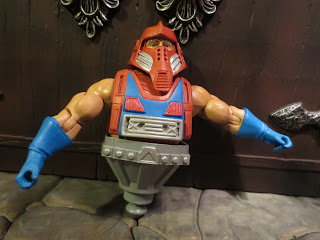 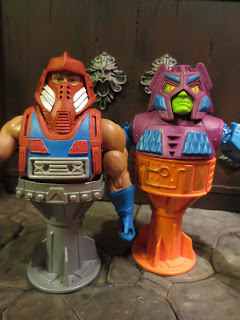 * In order to display the Energy Zoids on your shelf in their spinning forms Mattel included two stands. The stands match the colors of the lower torsos and keep the figures upright and standing. 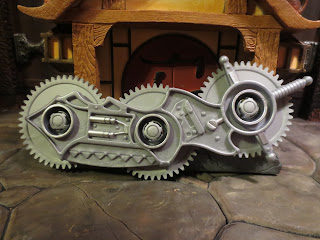 *One of the coolest things is that each of the figures has a special weapon that can attach to the bottom of their base if you remove the tip. Rotar has this nasty looking saw blade sword. There are actually three different plugs where this can be attached to Rotar. 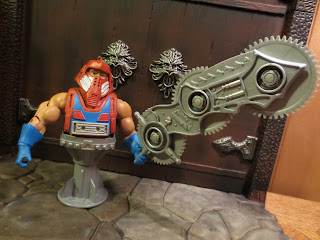 *He can actually hold it by the handle and use it as a sword! How vicious and awesome is that! I really love this accessory! 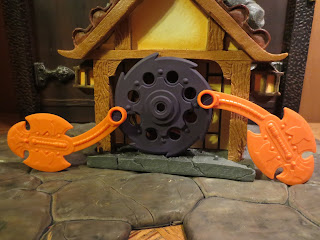 *Twistoid comes with this spinning saw blade that features two swinging axes. It's completely ridiculous in an amazing way! This really looks great and just fits the craziness of Masters of the Universe oh so well! 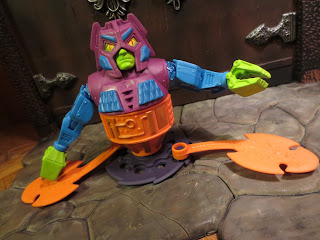 * Here's Twistoid all revved up and ready to go. The swinging axes on his base are really fun! 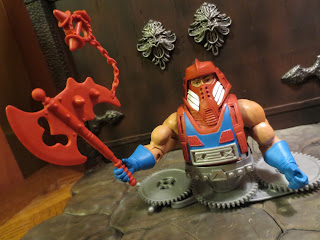 * While the Energy Zoids aren't terribly popular, Mattel went all in and did what they needed to do to make these figures work. These guys are incredible and really seem like credible threats on the battlefield! 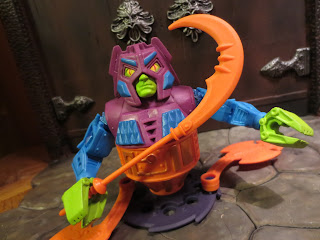 * Twistoid looks awesome with all of his gear on him. What a colorful, crazy looking figure! 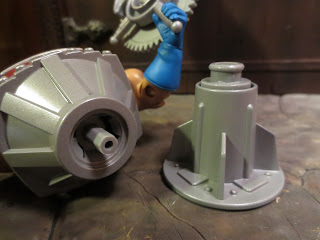 * My only complaint with these figures is that the torso and tips of the spinning bases can be really hard to remove. Everything stays on secure, which is important, but you'll need to use a bit of elbow grease to get these things going, at least for the first few times. 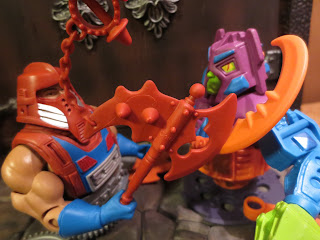 Rotar and Twistoid turned out far better than I ever hoped they could be. This is not only an excellent set of figures but a set that really takes some vintage characters that I'm not sure I was even familiar with until MOTUC started and made me care about them. Sadly, it seems like Mattel and the Four Horsemen took all this time to make these fun, unique characters that many fans may not get the chance to own. While these were the SDCC 215 exclusives, they were also sold on Mattycollector.com after the show. Unfortunately, Mattel neglected to do a subscriber Early Access day for these figures, as they seemed to suggest as one of the perks of the Club 200x minisub, and thus these sold out really, really quickly without subscribers getting a chance to grab them. Mattel really should have made more of these. You know who has them, though? The scalpers! These guys are really starting to jump in price. Hopefully they'll pop up in a future sale but in the meantime, if you missed out, you're left high and dry. Epic set of figures, but crappy Mattel handling of the situation. What else is new, right? Just when we thought things were getting better.

I have reviewed a ton of MOTUC figures on here, including: