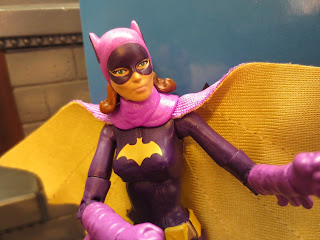 Yeah, Batgirl existed before Yvonne Craig appeared on the 3rd season of the Classic TV series and before "The Million Dollar Debut of Batgirl" in Detective Comics #359, but she wasn't Barbara Gordon. At the request of ABC, DC Comics recreated Batgirl to help increase ratings for the third season of the TV show. Gardner Fox and Carmine Infantino created Barbara Gordon and launched her in the comics while Yvonne Craig brought her to life! Today I'm looking at the first Batgirl action figure from Mattel's Batman: Classic TV series line An exclusive for Toys 'R Us, Batgirl was available both at SDCC 2105 and online at Toys 'R Us' website (Entertainment Earth helped with distribution at the show). I ordered her as soon as I could from Toys 'R Us and didn't have any trouble securing her. Ready for a look at Batgirl? Then join me after the break... 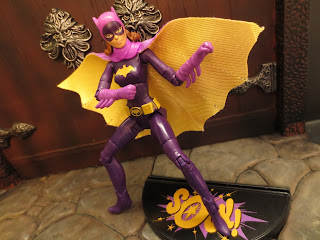 
*The Articulation isn't bad. It's pretty much in line with every other figure in the Batman: Classic TV Series line or some DC Universe Classics figures. Batgirl feels sturdy and solid and can hold a number of poses. 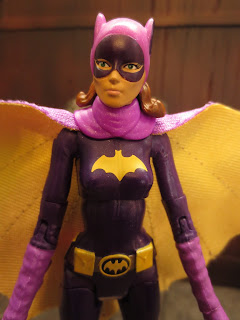 * The sculpt is isn't bad. It's not a fantastic sculpt or anything but it's definitely better than some of the other 1966 TV series based figures. The face looks a little too rounded, though. Still, it's recognizable and looks good mixed in with the other figures. The figure is all new and the outfit looks convincingly like an outfit, not just a painted body like most DCUC or Marvel Legends figures. While the proportions aren't perfect, she doesn't look overly skinny like the Batman figure. 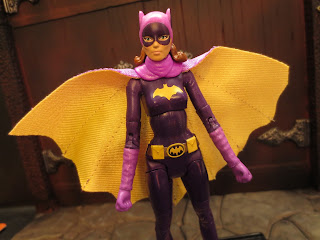 *I'm going to mention Batgirl's cape here again in a second but first I wanted to point out that this is a pretty high quality cape. The purple back and yellow front are separate pieces of material and the stitching seems very professional. This doesn't feel like a cheap tacked on afterthought as many soft goods pieces sometimes do. 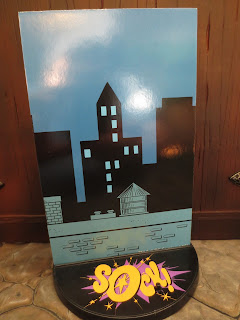 *I'm always a big fan of stands and Mattel has included them with nearly all of the releases in this line. Batgirl's says "SOCK!" and features a cardboard backdrop of the Gotham City skyline. This makes for a nice way to display the figure and definitely improves the overall presentation! 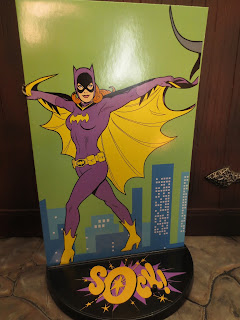 * Here's a shot of the other side of the backdrop. It's a pretty nice image of Batgirl in a very classic pose.  Interestingly, her boots are yellow on the art here. The figure itself is correct with the purple boots, however, so this is a bit of artistic interpretation. Why's the edge of what looks to be Batman's cape flowing over above Batgirl, though? My guess is that this piece will be reused in the Toys 'R Us three pack of Batgirl, Robin, and Batman. 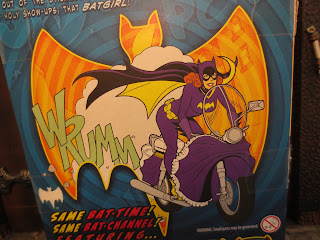 *As far as I am aware, the only difference between this figure and the Batgirl figure being released in the above mentioned Toys 'R Us three pack is the packaging. This is the only way to get Batgirl carded individually. I went with this options as it was cheaper and I already have a Batman. The box is pretty cool, though, and has some nice artwork on it. 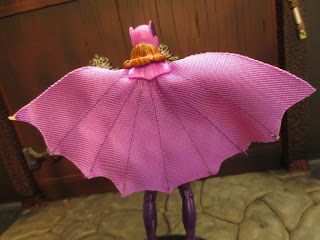 *The cape is permanently stiff cape. it's no solid but it seems to be set in this position rather than draping naturally around Batgirl's shoulders. What an odd decision? 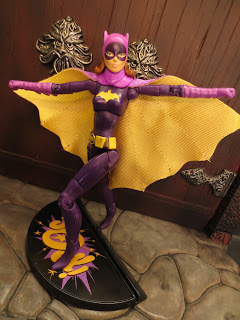 * My guess, due to the pose used on the backdrop, is that Mattel intended for the cape to reflect this famous Yvonne Craig as Batgirl pose. I have an autographed (and personalized) picture of Ms. Craig featuring this pose, so I'm well aware of this being one of the most well known images of Batgirl. Still, it would have been nice if Mattel would have included a way for Babs to hold the cape like in the image. Open hands could have worked, as could small loops somewhere on the cape. I feel like this was a real missed opportunity for something cool and iconic, similar to the Batusi Batman that kicked off this line. Heck, it would have been a way nicely differentiate this figure from the three pack version. 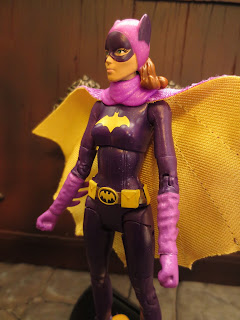 * I like that Mattel attempted to try and differentiate the cowl and gloves from the rest of the costume. Unfortunately, the colors just don't work that well: The cowl and gloves are far too bright (almost pinkish) and the main suit doesn't have nearly enough of a sparkly sheen to it. I actually think the bendable Batgirl from NJ Croce may have nailed the sparkly costume better! 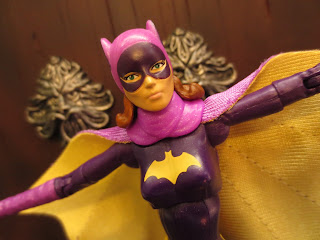 Having seen Mattel's work on this line (I do own most of the figures since they were available on Amazon for almost nothing in late 2013/ early 2014), I wasn't expecting anything incredible with this figure. I guess I can say that I wasn't disappointed, then, as this is a very, very average figure. The sculpt and articulation aren't bad and the inclusion of the base is nice, but the overall effect is just lacking. While Ms. Gordon is definitely in the upper half of Matell's 1966 Batman figures, she's still not a Great figure. I'll give her a Good. Anyone buying these figures will definitely want to have a Batgirl for their display although if you missed the SDCC sale you'll end up having to buy the Toys 'R Us three pack (with a repackaged Batman and Robin, again). Since the likeness issues with Yvonne Craig were ironed out this is the third Batgirl based on her likeness that I'm aware of (the other two are a stuffed Batgirl and the NJ Croce Bendable Batgirl), but we have more product coming soon from Diamond and Tweeterhead, so I'm hoping someday we'll finally have a definitive Yvonne Craig Batgirl collectible. Sadly, this isn't it.

I've reviewed a number of the Classic TV Series figures from Mattel, including:
Batman
Catwoman
The Joker
The Penguin
The Riddler
Surf's Up Batman
I've also reviewed two of the Batman: Classic TV Series Bendables by NJ Croce:
Batgirl
Batman

Other Batgirl items I've reviewed are: