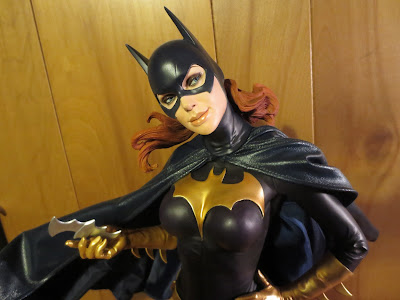 This is the first Premium Format from Sideshow Collectibles that I've ever owned. My friend Brad Bell (of Geeks with Wives and The Collection Agency podcast) has long been a fan of the Premium Format's 1/4 scale and I've had a chance to view a few of his figures. For me, though, I knew it would take something pretty special to finally cough up the cash for a 1/4 scale figure. That something special turned out to be Batgirl. It's not much of a secret that Batgirl is probably tied with Batman for the title of my favorite superhero. I say probably because it's entirely possible that Batgirl is actually at the top of the list (although by a small margin). As a comic fan, I find Barbara Gordon fascinating and relatable: She is an idealistic and driven character inspired by Batman. While she borrows the motif of the Caped Crusader she also makes it her own. I think it's pretty clear that in most portrayals Batgirl is not a sidekick: She's an independent operator who gets the privilege to work alongside the person who inspired her. Unlike many superheroes, Babs doesn't really possess some defining event such as possessing powers, a life-changing tragedy, or recruitment by an alien race that spurs her to become a crime fighter: She does it because it's what she see needs to be done. While many things about Barbara have changed in various depictions over the years (family history, career, age, etc.), the core elements of her character have remained the same: She's competent, driven, and talented enough to hang with folks possessing legitimate superpowers and still make her mark. Today I'm looking at Premium Format Batgirl, definitely the largest and certainly one of the most impressive Batgirl collectibles I own. Ready for a closer look and lots of pictures? Then join me after the break... 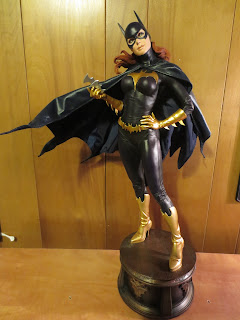 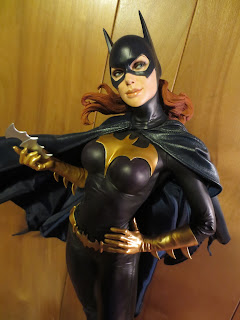 I'm changing up the format for this review as I don't really want to divide things up as neat and cleanly as I typically do with my positives and negatives. Instead, I'm going to share my thoughts about every aspect of the figure. The first thing I want to state is that I'm really amazed by the presence of this Premium Format in person. It really is quite incredible and the size just magnifies the excellent work that Sideshow has done here. While Batman deals in dark and brooding, the members of the Batfamily have always managed to bring some levity to there jobs, so the pose is great as it's a mixture of Batgirl being playful while still looking confident and in charge. There's a real heft to the piece that is definitely shocking to someone like me who usually deals in smaller 1/12th scale figures. 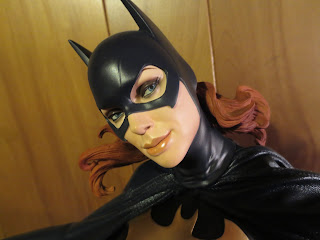 Barbara's quite lovely and this sculpt certainly captures her charm. Sideshow's likeness walks a fine line between being looking like a comic character and resembling an actual person. It doesn't resemble one version of Batgirl in particular but nicely looks like all of them. They've went with a slightly more mature look for Batgirl here and I think that's for the best. She looks like she's well into her career and every bit the professional we've come to expect. 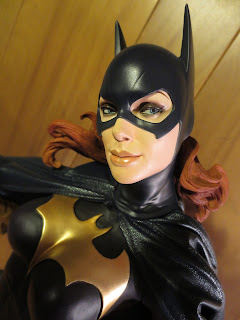 The eyes are quite impressive. They're extremely neat and clean and are darting off to the left as Babs is sizing up her next target. Her mask looks good and once again manages to capture most Batgirl depictions without adhering to any one in particular.

If I have a disappointment with this piece it's that there isn't a great deal of mixed media usage on the statue. I know a number of Premium Format figures utilize various materials and I'm really curious what a separate cowl would have looked like on the figure. 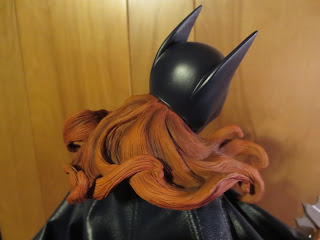 The main headsculpt for Batgirl features her hair blowing around behind her. It's a bit wavy and a little longer than shoulder length. If you buy any version of this statue, this is the headsculpt you'll get. The heads swap easily through the usage of a strong magnet. 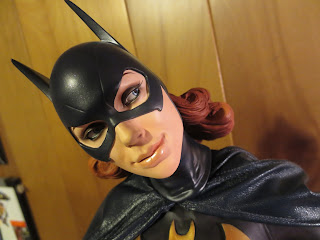 The Sideshow exclusive version of this statue comes with the classic hairstyle head. The headsculpt is identical but the hair is a bit shorter and curlier. This looks more like the hairstyle of Barbara as portrayed by Yvonne Craig or in the silver age comics. 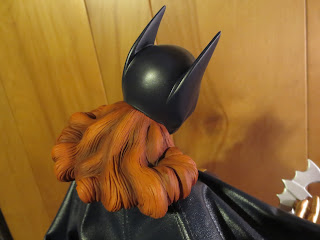 Here's a view of the classic hairstyle from the back. 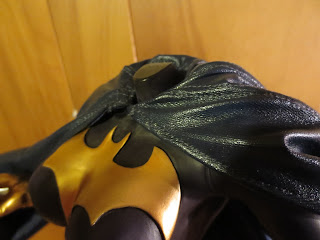 I'll talk about the look of the cape in a minute but I do want to mention the way the cape attaches to the body. It actually just folds down into a recess around the peg where the head attached via magnet and is held in place by the head. I really, really don't like this method. It's difficult to get the cape to fit securely in the recess and it just doesn't feel very intuitive. The way it's raised up causes me to check the tightness of Batgirl's head whenever I swap it. 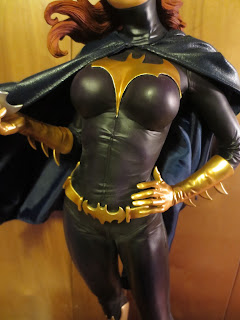 One of the things I'm extremely impressed by is that the statue actually looks like it represents someone wearing a costume. Notice the wrinkles and folds on the torso. This is less of a skin tight bodysuit and more of a carefully tailored uniform. The bat emblem on Batgirl's chest is raised and is painted with a metallic gold paint. The outfit design really does take cues from a few different version's of the Batgirl costume while still creating something that stands on its own. 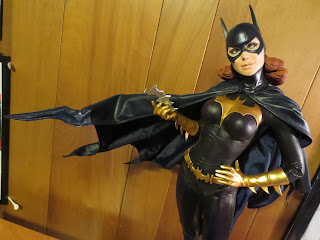 While I'm not a big fan of how the cape sets on the body, I do love how it looks. The outside it appropriately leathery (probably pleather) while the inside is smoother. There are wires in the cape that allow you to pose the cape and give it a windswept look. It's a neat feature and you'll have it looking great it no time. 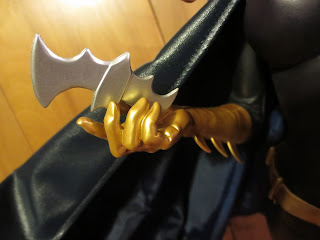 I love how Barbara is holding this batarang. I like the look of the batarang. I just wish it were a bit more substantial feeling. It's extremely light and feels a bit fragile. I would have loved to seen this as an actual metal accessory attached to the statue.

The gloves look awesome! I love the color and the texture in the sculpt. 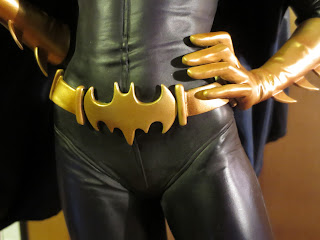 Batgirl has a fairly simple belt but it nicely matches the rest of the outfit. I'm also a big fan of the hand resting on her left hip. There's a lot of life in even the small details of the sculpt. 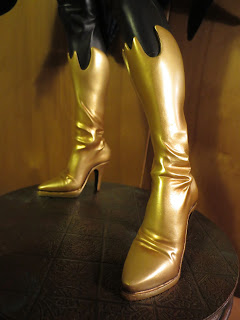 Sideshow went with high heeled boots for Batgirl. Once again, the folds and creases in the sculpt really make this look as if these are made from a pleathery material. That would have been cool but the sculpt still is killer. Who knows if actual material in this scale would have had the same level of realsim? It's always difficult to tell. 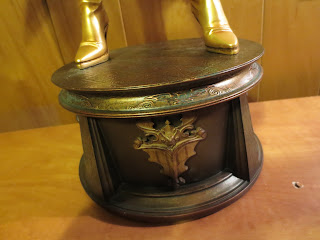 The base is rather elaborate. It has a bronzed look to it and is covered with ornate leafing and some rather unusual crests on all sides. Batgirl plugs securely into the base. If you move her, make sure to hold the base and the figure, however, as I'm sure it's not a permanent connection. 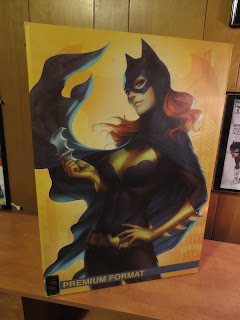 The box is pretty awesome and features some lovely artwork from Stanley "Artgerm" Lau. The bright yellow yellow background looks great and absolutely captures the Batgirl "feel". I love it! 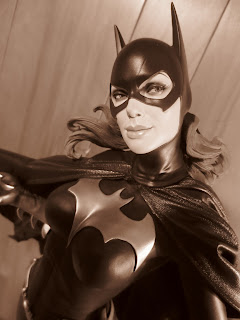 I'm very happy with my Batgirl Premium Format and, after a year of paying for her month by month through Sideshow's flex pay plan, I'm glad to finally have displayed with the rest of my collection. This is an excellent interpretation of Barbara Gordon as Batgirl and Sideshow Collectibles and their team did an excellent job. My only real complaints are that I'm still now wild with how the cape attaches to the figure and I wish the batarang felt a bit more substantial. Other than that, this is a quality piece. I'm giving her an Great and a 1/2 rating. If you're a Batgirl fan or a fan of the Bat-family and you're looking for something really special for your collection, this might be something to check out. Of course, she seems to be sold out at Sideshow now so you might end up paying a scalper's ransom to add her to your shelf. Just make sure it's a large shelf.


I've reviewed a ton of other Batgirl stuff on this site, including... 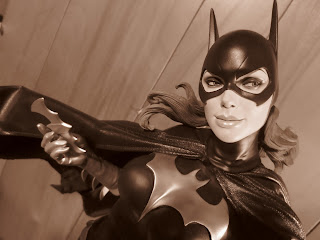