Action Figure Review: Peekablue from Masters of the Universe Classics by Mattel 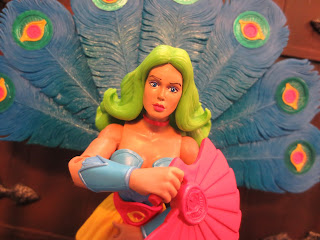 For July 2014 the Masters of the Universe Classics Club Eternia figure is....Peekablue. Peekablue, She-Ra's "watchful feathered friend" who is able to use the eyes on her plumage to give her a better view of everything that's happening around her. Peekablue was one of the vintage Princess of Power from the second series of figures released in 1986. She's the second to last new POP series 2 figure needed in classics (just Perfuma left) to complete that year, with the exception of a She-Ra and Catra variant (although who knows if those will ever get released?). Yup, Peekablue is a peacock themed character. This is Masters of the Universe though! Aren't wacky themed characters just part of the fun? Ready to watch Peekablue strut her stuff? Then join me after the break... 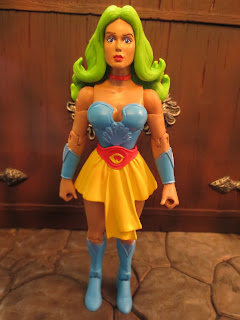 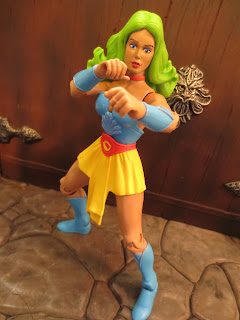 *Peekablue has fantastic articulation. The joints are tight and she has everything you'd expect except the boot swivel that many of the female figures have been lacking lately. Of course, she also has a decent amount of new tooling, so I'm not devastated. MOTUC figures are as fun to play with as ever. 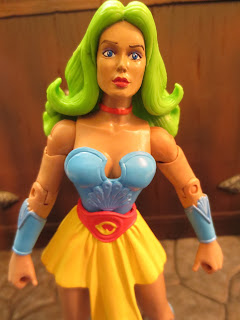 *I really like Peekablue's sculpt. She's a fairly basic POP characters (well, her main body anyway) but there are some cool references to her character such as the peacock plumage on her bodice and the "eye" on her belt. The headsculpt is also rather lovely. She's not a standout or anything but she looks great and has a very fun hairstyle. I loved how her hair is flipped up in the back! 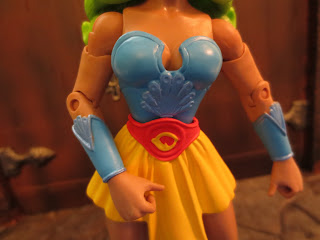 *Her bracers are cool and they, along with her bodice, have a metallic blue trim (her boots have this also). There are a number of different colors on Peekablue but oddly they work well together. She's incredibly bright and vibrant! 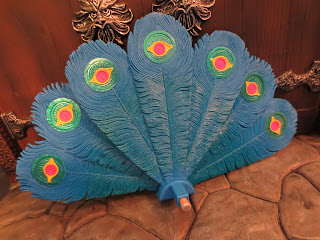 *Peekablue's special power is that her feathers function as some sort of mystical eyes. They're beautifully sculpted, fairly large, and feature a hinge that lets them fold open and closed. The eyes are nicely painted and there's a cool metallic sheen to them that really improves the overall appearance. 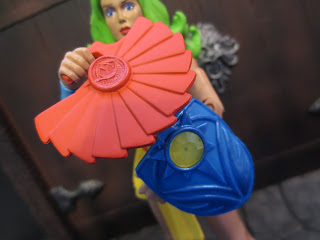 *Other than her feathers, Peekablue comes with two accessories: A bladed fan and a shield. The shield is the same shield that many POP characters have come with but this time it's cast in a deep blue plastic with a yellow gem. The bladed fan is rad, though. Seriously, I love when Mattel updated the POP ladies with weapons based on their specialties. A bladed fan can mess you up! 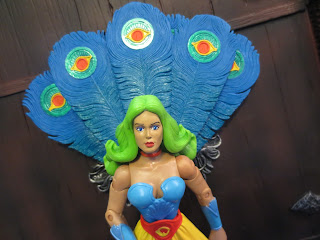 *Peekablue's plumage looks awesome but I'm not sure that I'm sold on how it attaches to he back. There's a square hole on her back and the base of the feathers have a square peg. You do the math! The base is really chunky, however, and sticks out a bit. It does accommodate her longer hair but the way it sticks out makes her tough to stand up on her own. 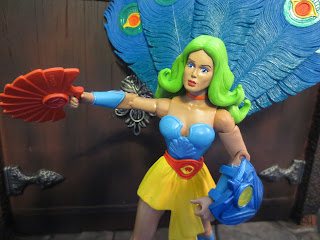 Peekablue was not one of my most anticipated figures but I have to admit that I'm quite pleased with her. She's colorful, creative, and fun. I love the look of her plumage and the fact that she comes with an actual weapon. While everyone's currently consumed with the crap storm that is Matel's recent King Hsss debacle (and it is a legitimate issue) it's nice to see that we're still getting solid, quality figures. Peekablue might not be the most exciting addition to the lineup but she's a well made toy that will stand out on the nicely growing Princess of Power shelf, which is really saying something: That shelf is filled with bright colorful characters!