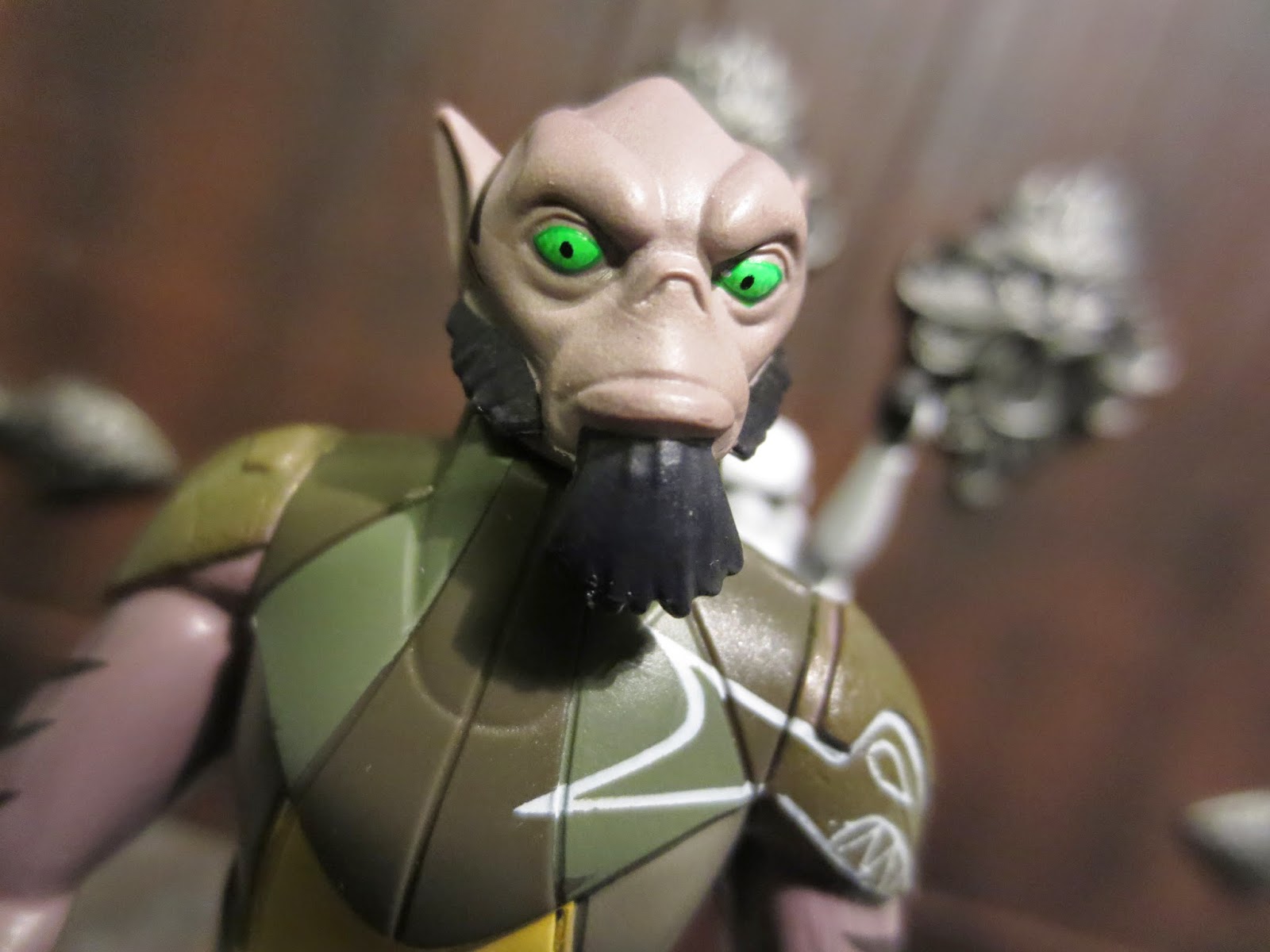 I mentioned in my review of Darth Malgus that I haven't bought many Star Wars figures over the past year or two. Hasbro has been really weird lately; if you want to see how odd things are right now, just read this Q&A session between Hasbro and the folks at Jedi Temple Archives. Not only are fans somewhat disappointed by the type of figures and lack of figures from Hasbro, we can't even find most figures on store shelves. This is particularly strange when you consider that Star Wars Rebels just started airing last fall. You can typically find the bizarre Star Wars Command sets, the role play items, and the lightsabers, but that's about it. Most of the 1/18th scale figures are nowhere to be found. The only single packed Rebels figure I've ever seen in a store thus far was the lone Inquisitor that I scooped up. Thankfully I saw this mission series two-pack which included another of the main Rebels crew, Garazeb "Zeb" Orrelios. I'm really enjoying Rebels and I have to say that Zeb is my favorite character thus far (followed closely by Sabine). He's a great character with a terrific mix of toughness, humor, and heart. Ready for a look at everyone's favorite Lasat and a Stormtrooper for him to throw around? Then join me after the break... 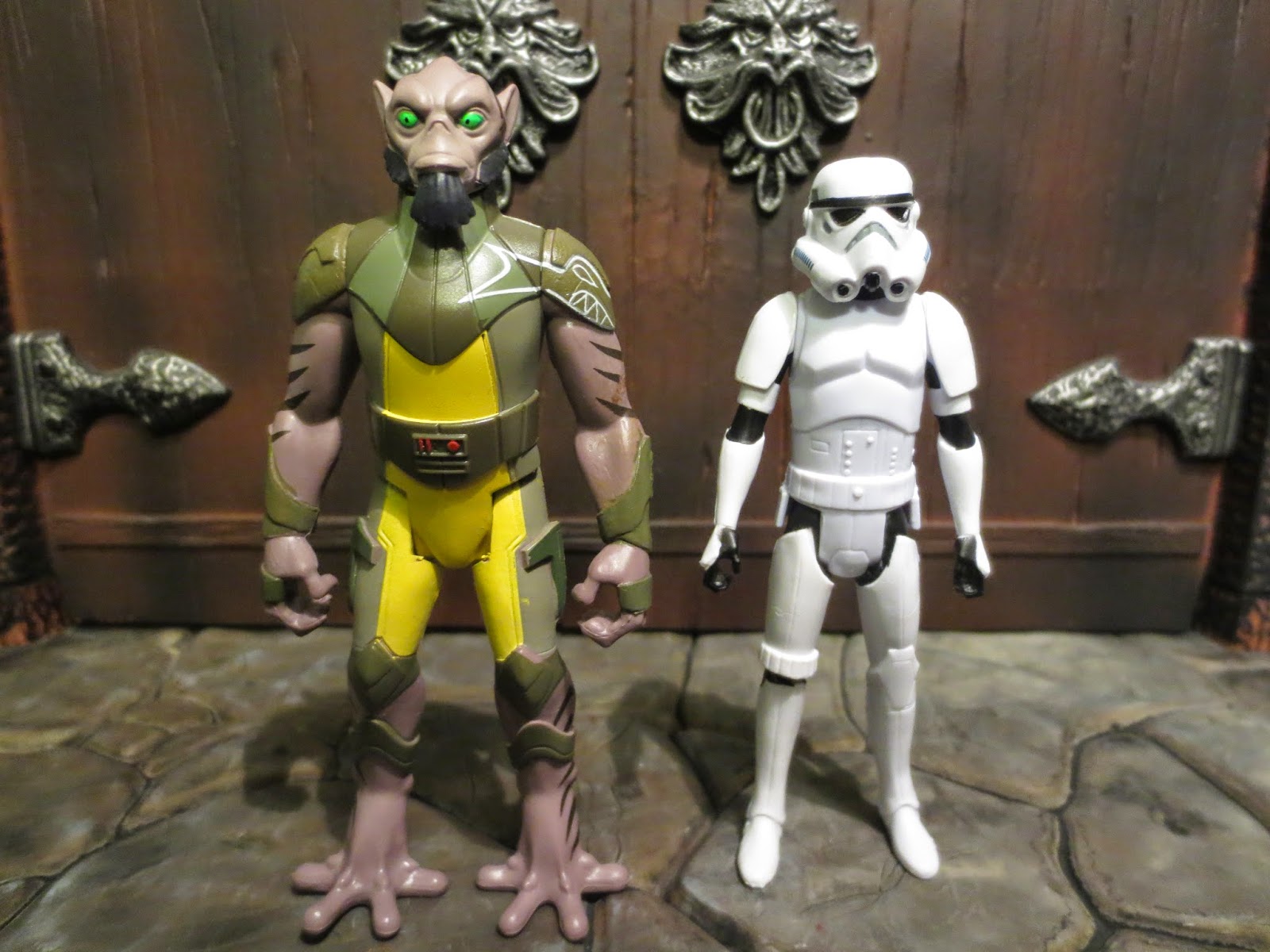 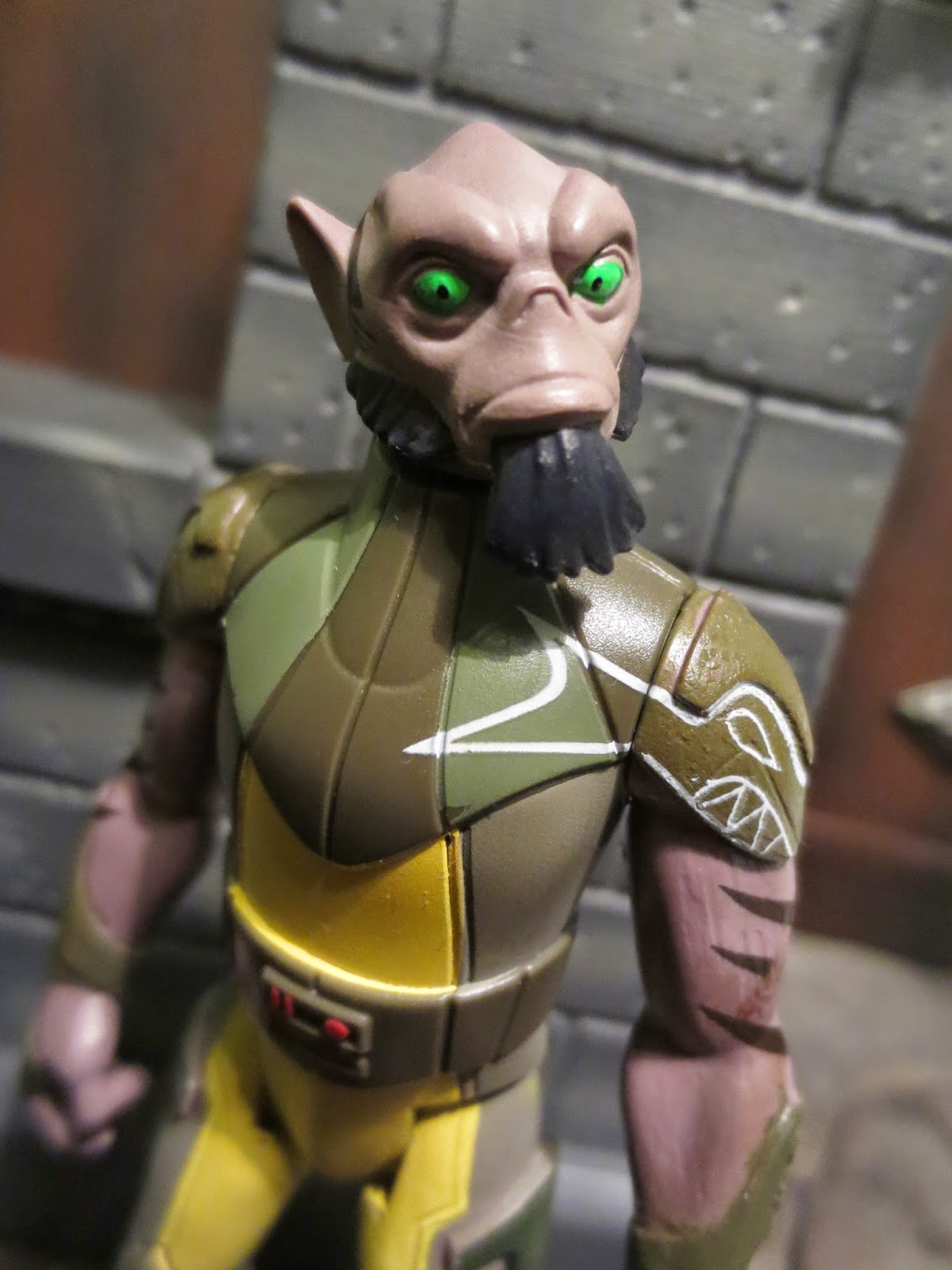 *The sculpts on both figures are quite nice for being simpler figures from the Saga Legends/ Mission Series line and not from the more collector focused The Black Series. Zeb looks great and nicely matches his on-screen counterpart. Zeb has quickly become my favorite character from Rebels and I'm pleased by simple detail on his outfit and slightly perplexed/ angry look on his face definitely captures. 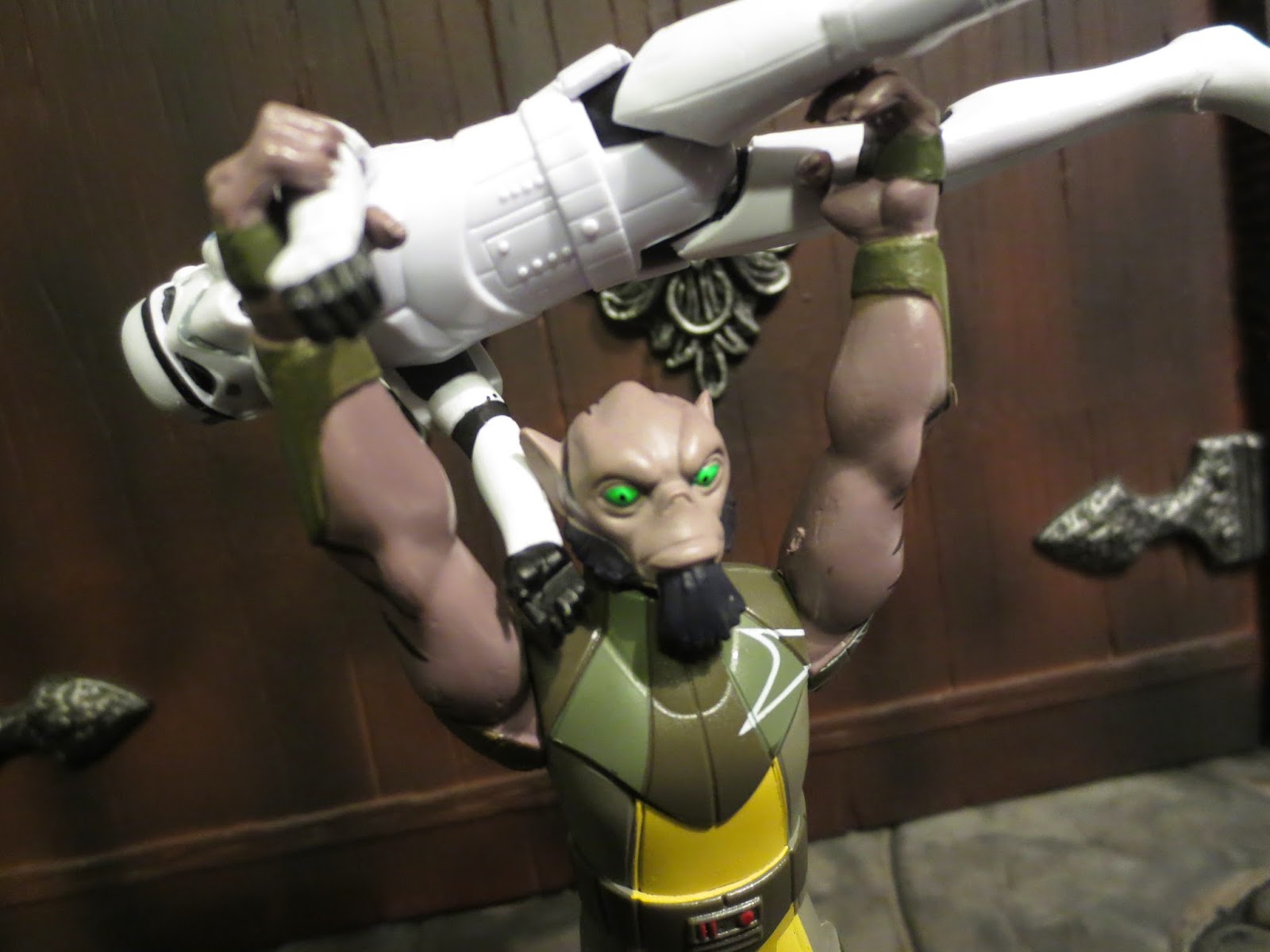 *The paintwork is quite neat and does look good on both figures. While the Stormtrooper is simply white and black  with a few smaller details on his helmet, Zeb is quite impressive. I love the paintwork on him, particularly his green eyes and the shark-like pattern on his left shoulder armor. Rebels has a great looking cast of unique characters and Zeb definitely represents that well. 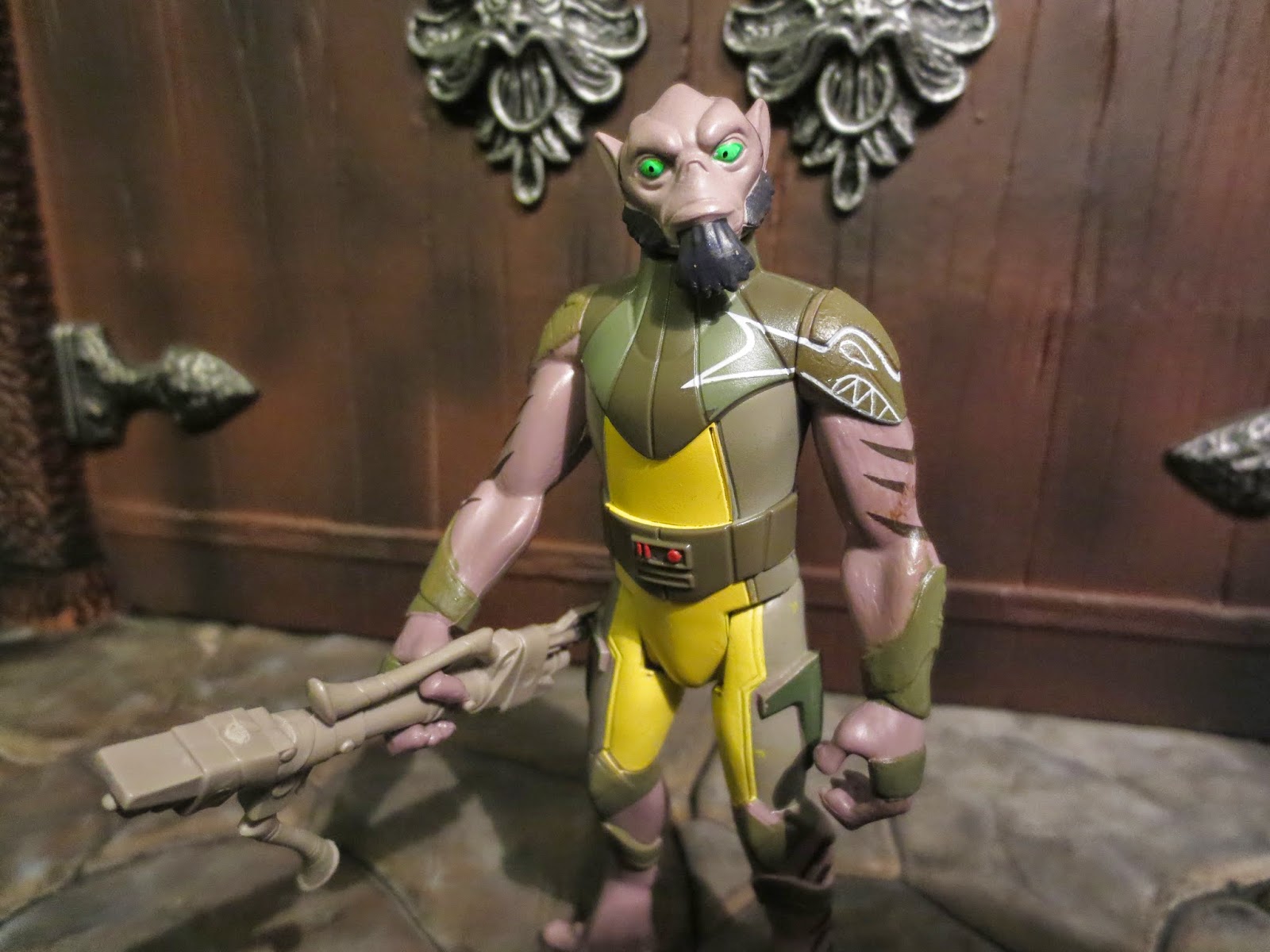 *Seeing as how a few of the modern figures come with nothing, the fact that each figure comes with an accessory is rather welcome. The Stormtrooper's E-11 Blaster rifle is nothing special but Zeb's AB-75 bo-rifle is kind of cool. It doesn't unfold like in the show but it is clearly recognizable and even has a paint application: The tip of the blaster is painted red! 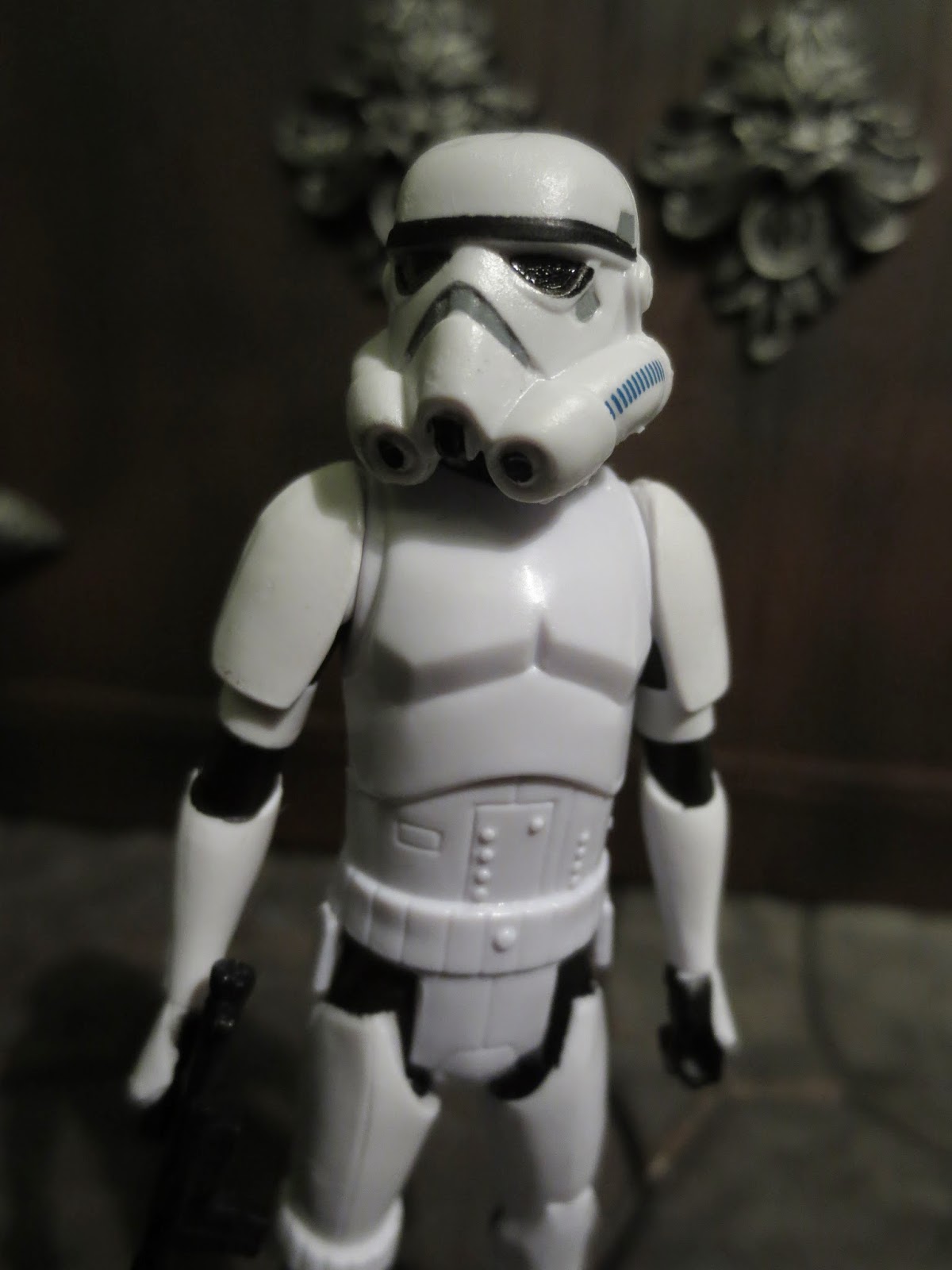 *Overall the Stormtrooper doesn't look bad; just bland. There are a good number of detailed bits here on the armor but after the 6 inch Stromtrooper and plenty of great 1/18th scale Stromtroopers, it's just tough to get too excited about this guy. Part of that might be the lack of painted details but the helmet is the biggest problem. While the chunkiness of the helmet intentionally separates him from a standard film Stromtrooper, the scowl-like grill on the front of the helmet is just too darn large. It looks really awkward. 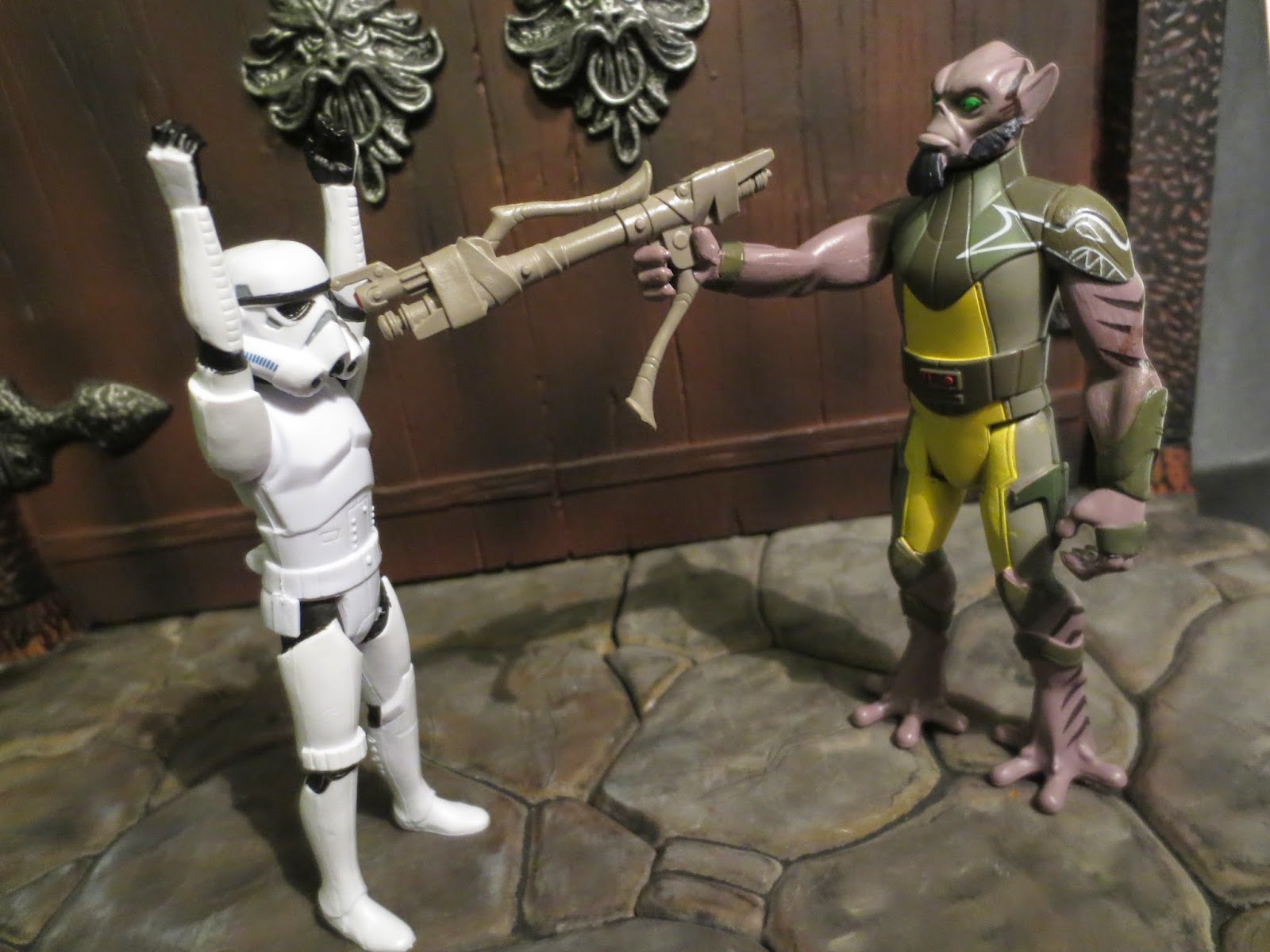 *I get that the purpose of these figures is to be cost effective but I can't believe that Hasbro can't give them swivel waists or ball jointed heads. Seriously, what could the extra cost be in giving them ball jointed heads versus a swivel head? The figures are sturdy but they're just so stiff. If Hasbro wants to release vintage styled Star Wars figures, why not just try to copy Kenner like Funko and everyone else is doing right now? 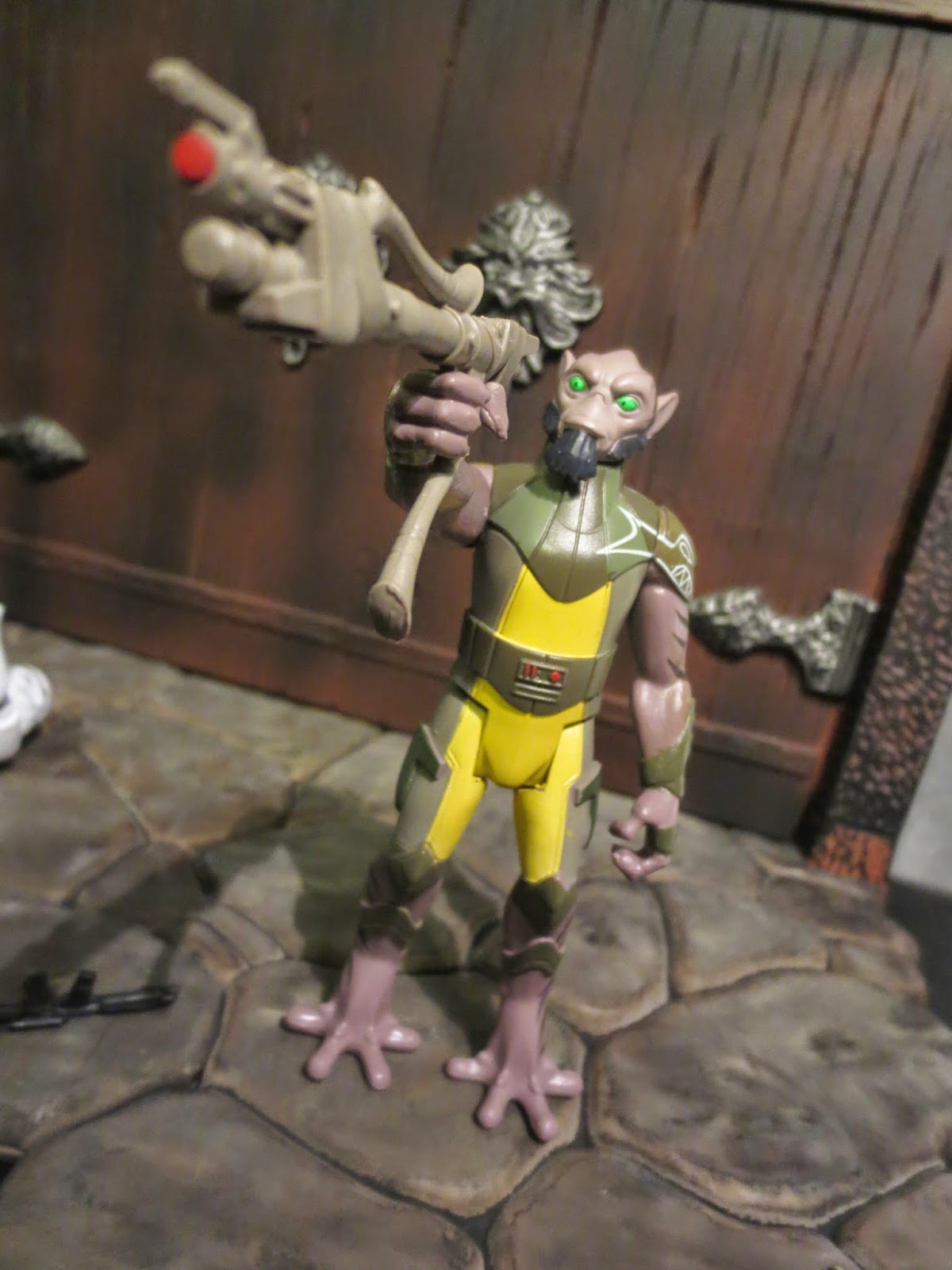 While I'm ignoring most of the movie and Clone Wars Saga Legends and Mission Series Star Wars figures with five points of articulation or less, I'm really wanting to pick up the main Rebels crew. While these aren't best figures, they do look nice and capture the style of animation well. I'm also not convinced that we'll see the Rebels crew as well articulated 1/18th scale figures at any point in the future so this might be my only way to collect this crew that I'm coming to love. These aren't bad toys not poorly done figures. Rather, they're just not to my preferences. Still, this was a set that only cost me $10 bucks and, while I'm not overly thrilled with the Stormtrooper, I really love Zeb. Overall, I'm giving this set a Good and a 1/2 rating. It's the only way to get Zeb right now so, if you love the character, whatcha gonna do? 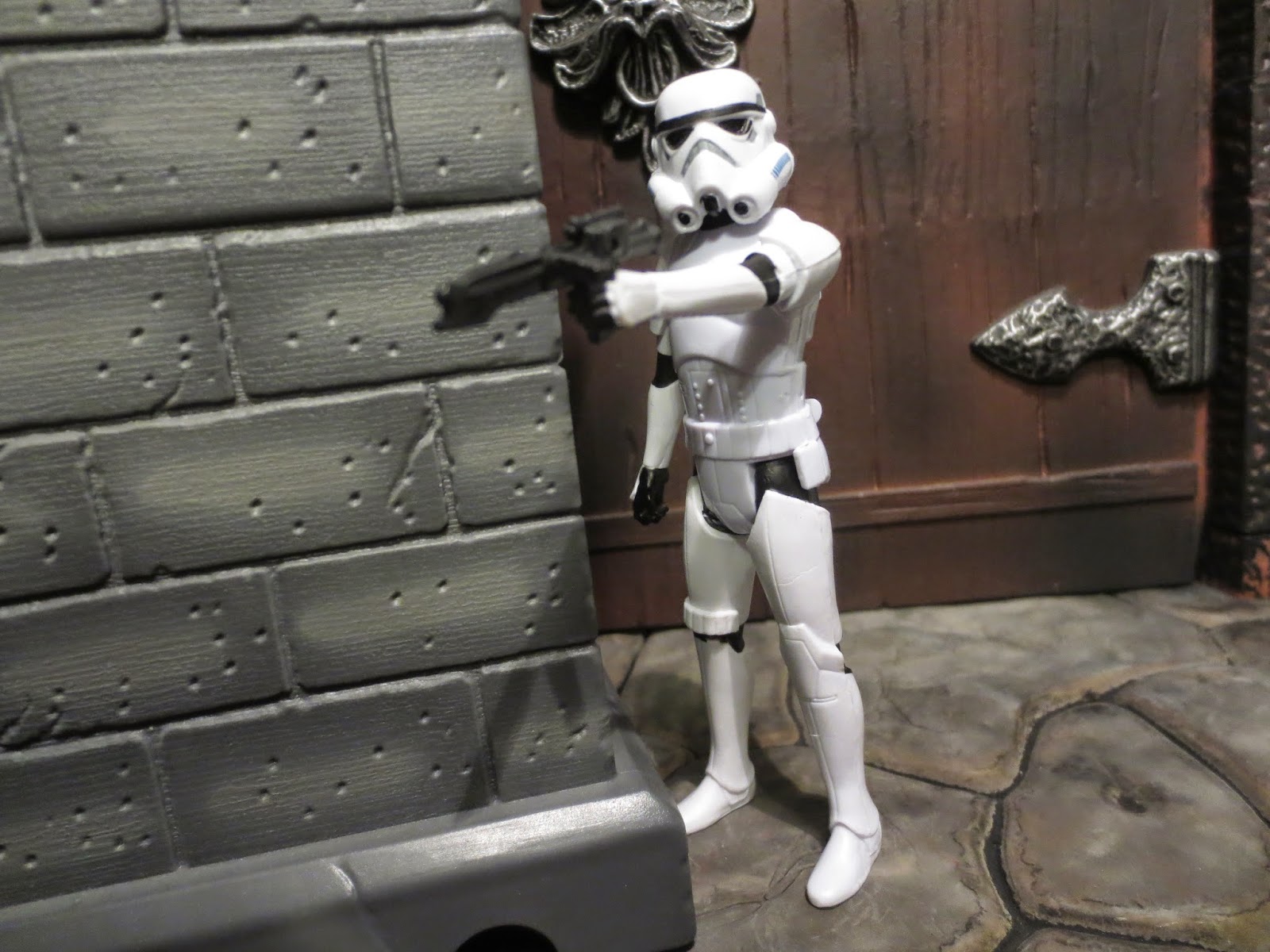 Since I can't find them, I've only reviewed one other Rebels figure: The Inquisitor