Action Figure Review: Huntara from Masters of the Universe Classics by Mattel 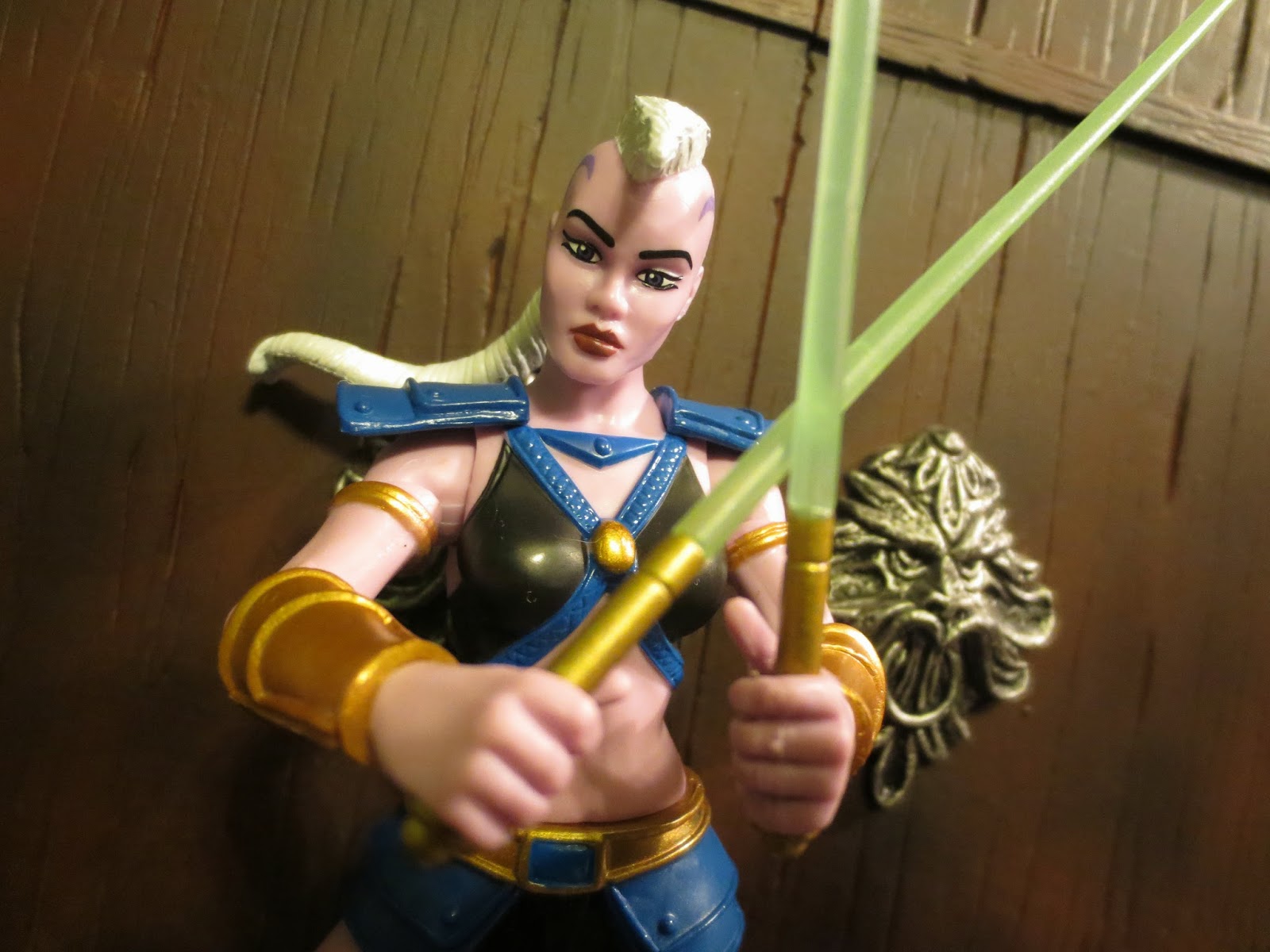 So....I'm a really proud parent these days! My 19 month old, when passing through the living room and seeing our TV, will get excited and yell "She! She! She!"

That means she wants to watch She-Ra. While there are so many toylines, comics, cartoons, and movies that I love, I'm really glad that Masters of the Universe has the Filmation animated series. It's just so kid friendly and it's something great that her and I (and my wife, somewhat reluctantly) can share together. She gets really excited whenever She-Ra transforms, she loves Skeletor's voice (she laughs whenever he talks), and she also thinks that Loo-Kee showing up at the end is the greatest thing ever. Anyways, it's giving me fresh eyes on the property and I was really excited that just the other night the episode "Huntara" came on. Today's figure, Huntara, is the guest star of that episode. She's a Silaxian bounty hunter whom Hordak hires to bring down She-Ra. Of course, Hordak has to convince Huntara that She-Ra is evil since Huntara is apparently an ethical bounty hunter. Anyways, she's a pretty cool one-off character, the winner of a fan's choice poll (I think she beat out Lord Masque), and a figure that wasn't listed for sale in Mattel's March sale, effectively making her another sub-exclusive (at least for now). Ready for Huntara? Then join me after the break... 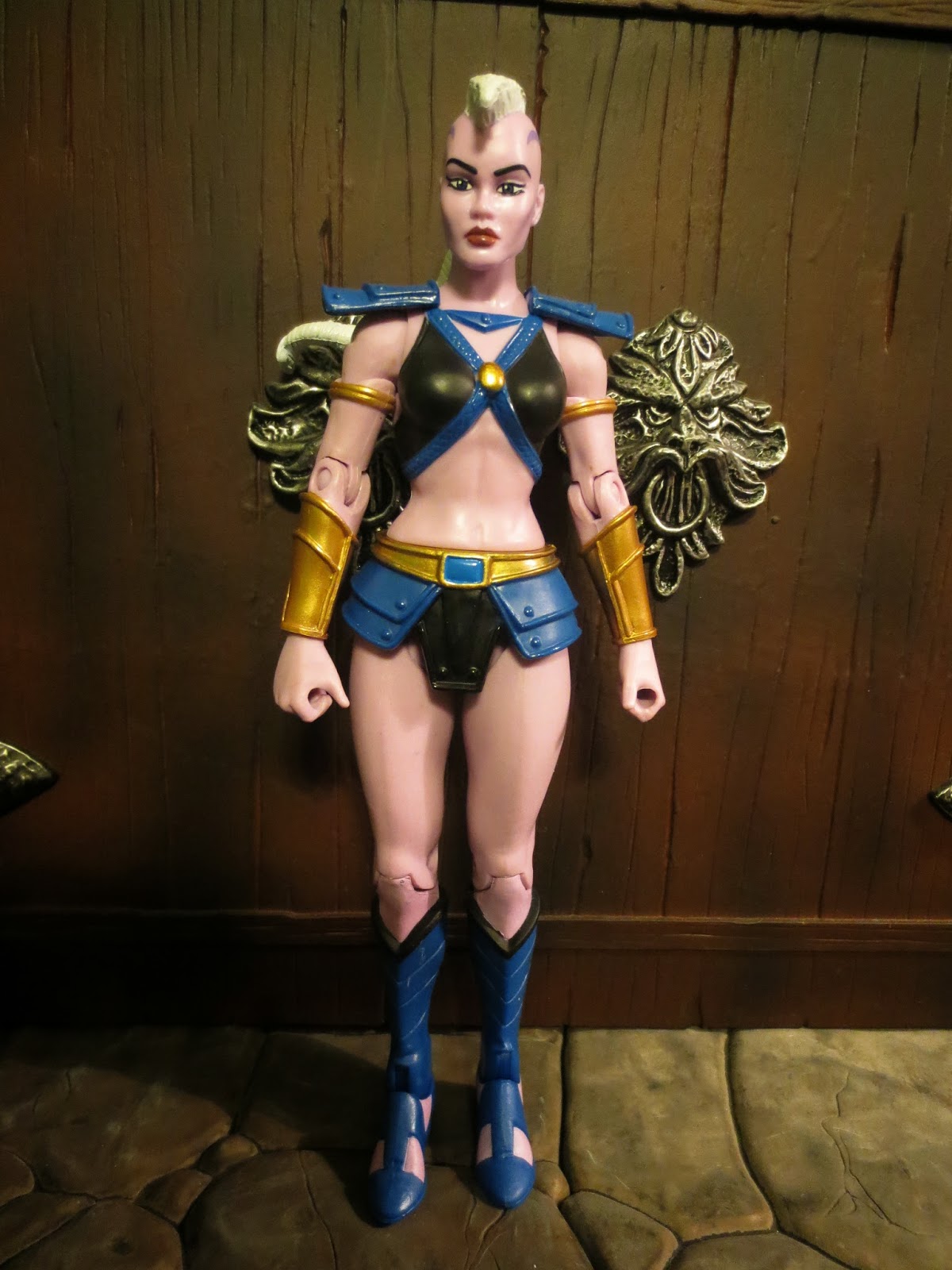 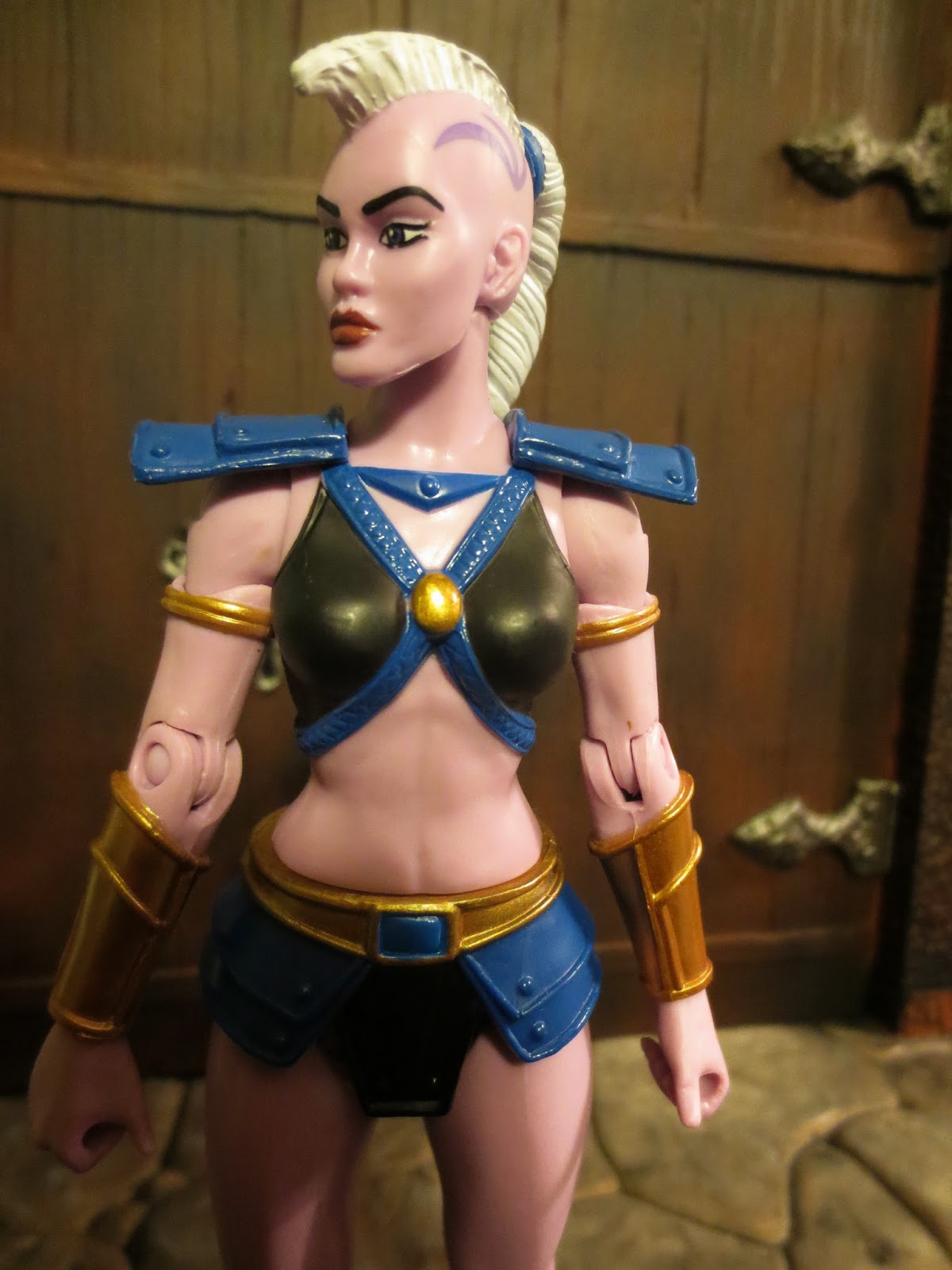 *Huntara has a great overall look that balances the smooth appearance and bright colors of the Filmation cartoon with the detail and style of a standard MOTUC figure. While there's not really one clear and consistent MOTUC style (despite the rumors of the so called "Classicizer" machine) Huntara is one of those figures who just looks good no matter who she's displayed next to.

*Despite the reputation Mattel has as being cheap (and sometimes they are), many of their 6-7 inch scaled lines like MOTUC and WWE Elite are really solid, well put together toys. While some of the early MOTUC figures had loose joints and could be prone to breakage, this has definitely changed over the past 5 years or so. Huntara's joints are tight and sturdy. While she's missing a few joints (I'll mention them in a minute), overall she's well articulated and extremely fun to pose. 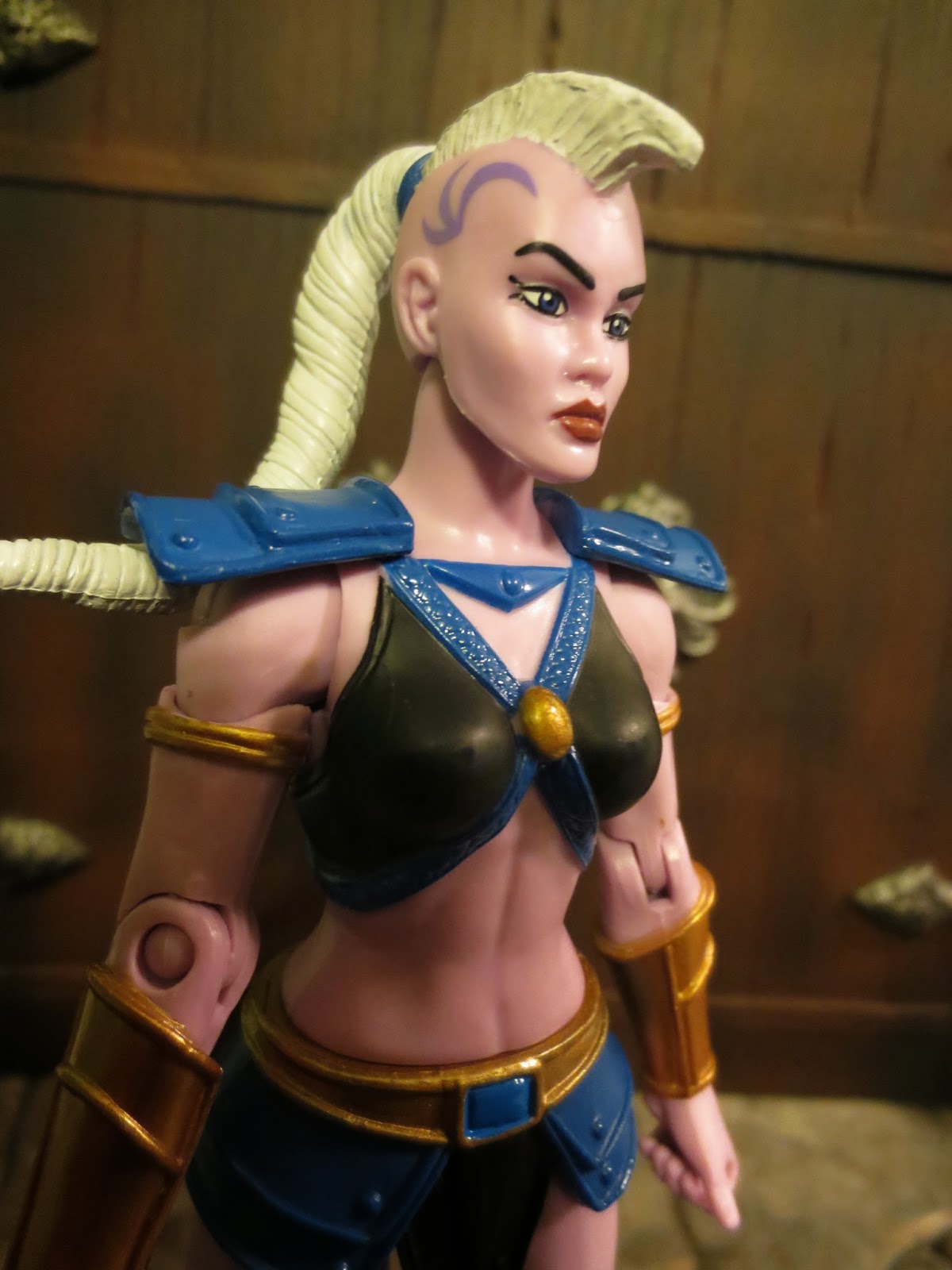 *Huntara is a fearsome looking and attractive warrior. While it seems that her early concept and appearance on the Filmation cartoon were inspired by Grace Jones, this figure's face actually looks more like Kim Kardashian to me. The hair is definitely unique, though, and features a neat combination of a mohawk and a ponytail. Her outfit is gladiator inspired and rather minimal, so her muscular abdomen is on display while her waist and shoulders are covered by some armored plates. Everything looks great and matches up nicely with Huntara's onscreen appearance.

*Overall Huntara's paintwork is a success, too. I love the lilac skin tone chosen for her as it definitely sets her apart in the line. MOTUC is a rather diverse line and as toys they just look fabulous together due to so many vivid, unique color palettes. Her eyes and the tattoos on the sides of her head are very neat. While her armor features a mixture of matte and shiny metallic paints to give it a rather realistic appearance. 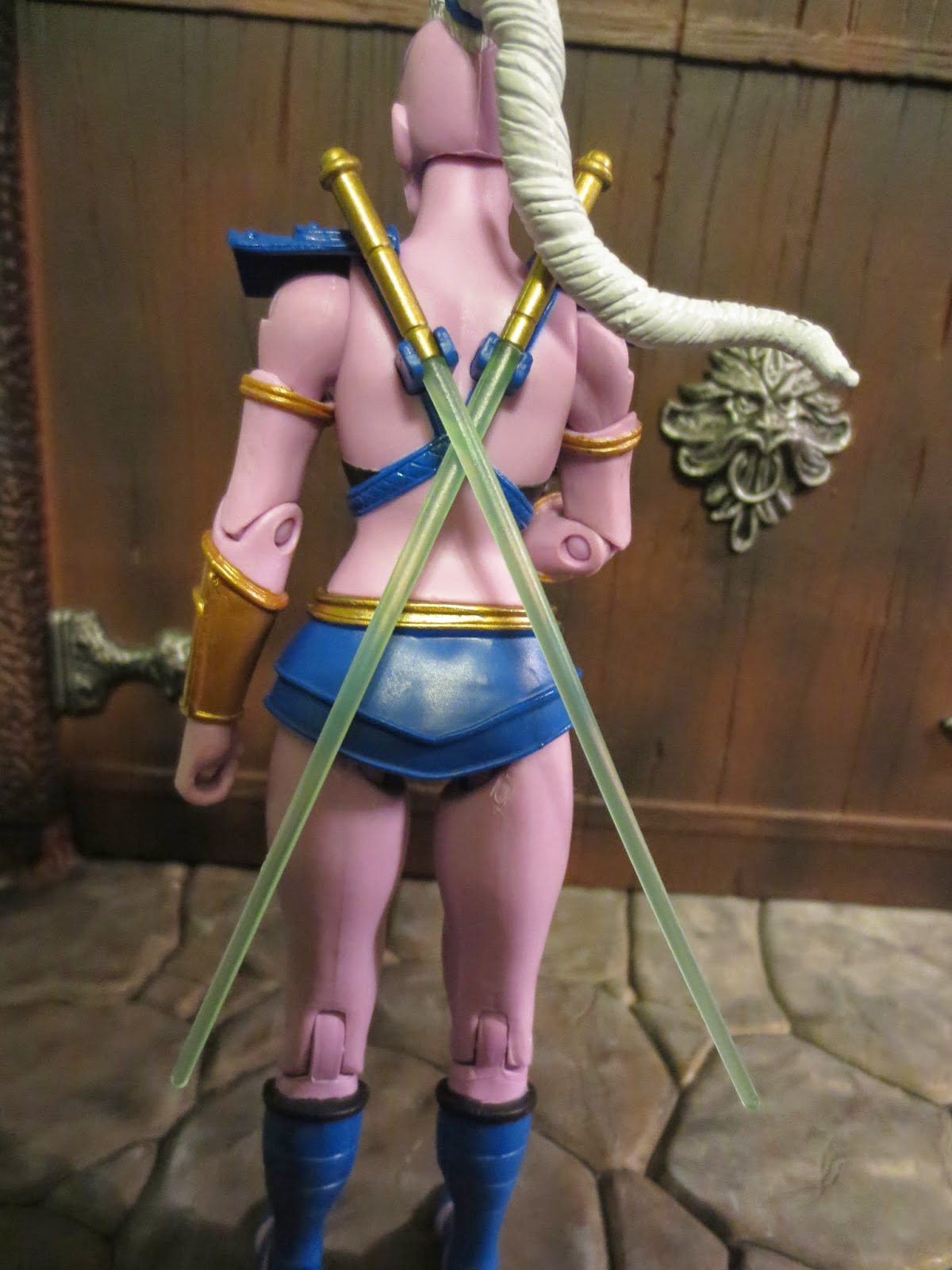 *Huntara comes with two accessories that belong to her: Her green bladed laser swords (these are totally not lightsabers, y'all! Those are a trademark of Lucasfilm and Disney!). These light...laser swords are molded in a translucent green plastic with metallic gold painted hilts, much like any modern Kenner or Hasbro lightsaber from their Star Wars line space toy. They're molded in a nice plastic that isn't overly brittle, helping to prevent breakage. Huntara has two clips on her back to hold these. If these were...some other type of laser sword, how could she possibly hold them in a clip on her back while they were ignited? Huh? Anyways, I like them. 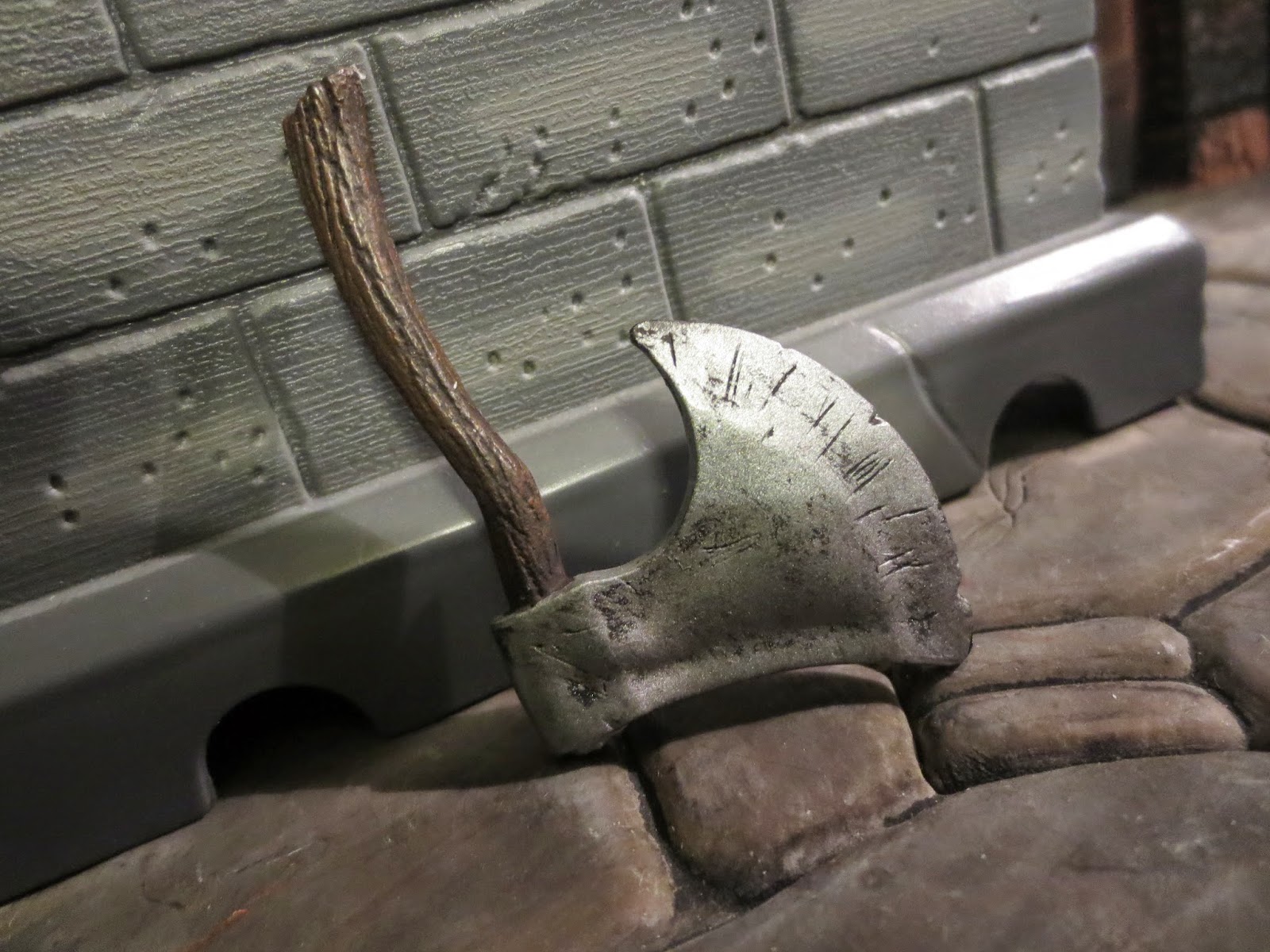 *Another accessory comes with Huntara but it's not intended for her. It's an ax and it's intended for the 2015 Club Eternia subscription Oo-Lar figure that also shipped in March. Since Huntara did not have any figures available for day of sale buyers on MattyCollector.com, she's kind of a sub exclusive, too (although excess figures could be sold at another time in the future) and anyone with her should also have Oo-Lar, and visa versa (unless they bought either figure through a reseller). This ax is an awesome accessory. it has a truly wicked sculpt (seriously, Gimli would dig this thing) and some great paint work that gives it a weathered, primitive parlance. 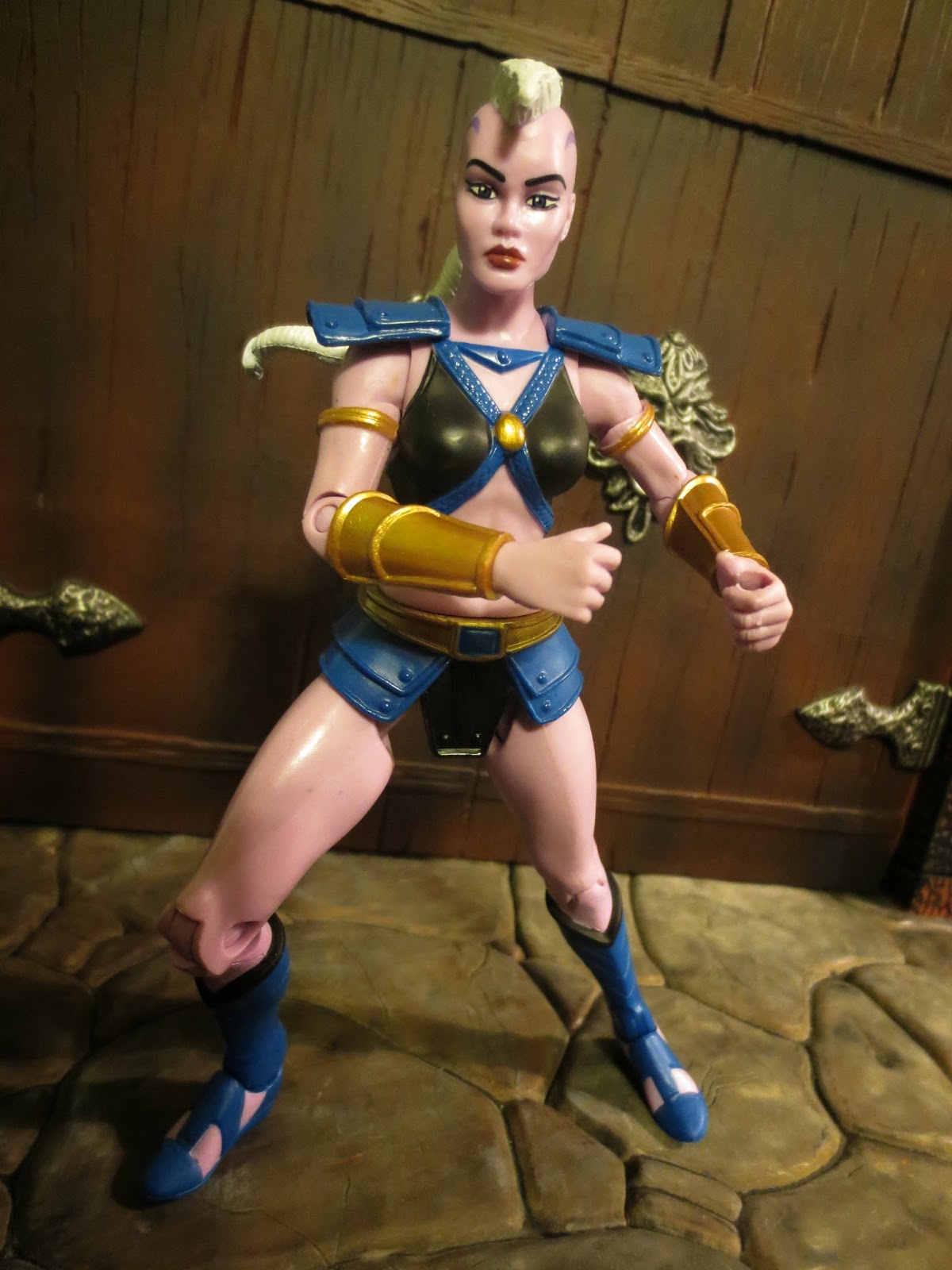 *Lately we've been seeing more and more examples of MOTUC figures having inconsistent joints and, unfortunately, Huntara suffers from the lack of a few typically standard joints. She's missing both boot swivels and the laterally hinged ankles. This definitely limits the ability to give her wide legged battle poses which absolutely fit a character like her who is an extremely skilled warrior. Her boots and feet are new sculpts so perhaps this was done to save costs. Still, it's a bit disappointing. 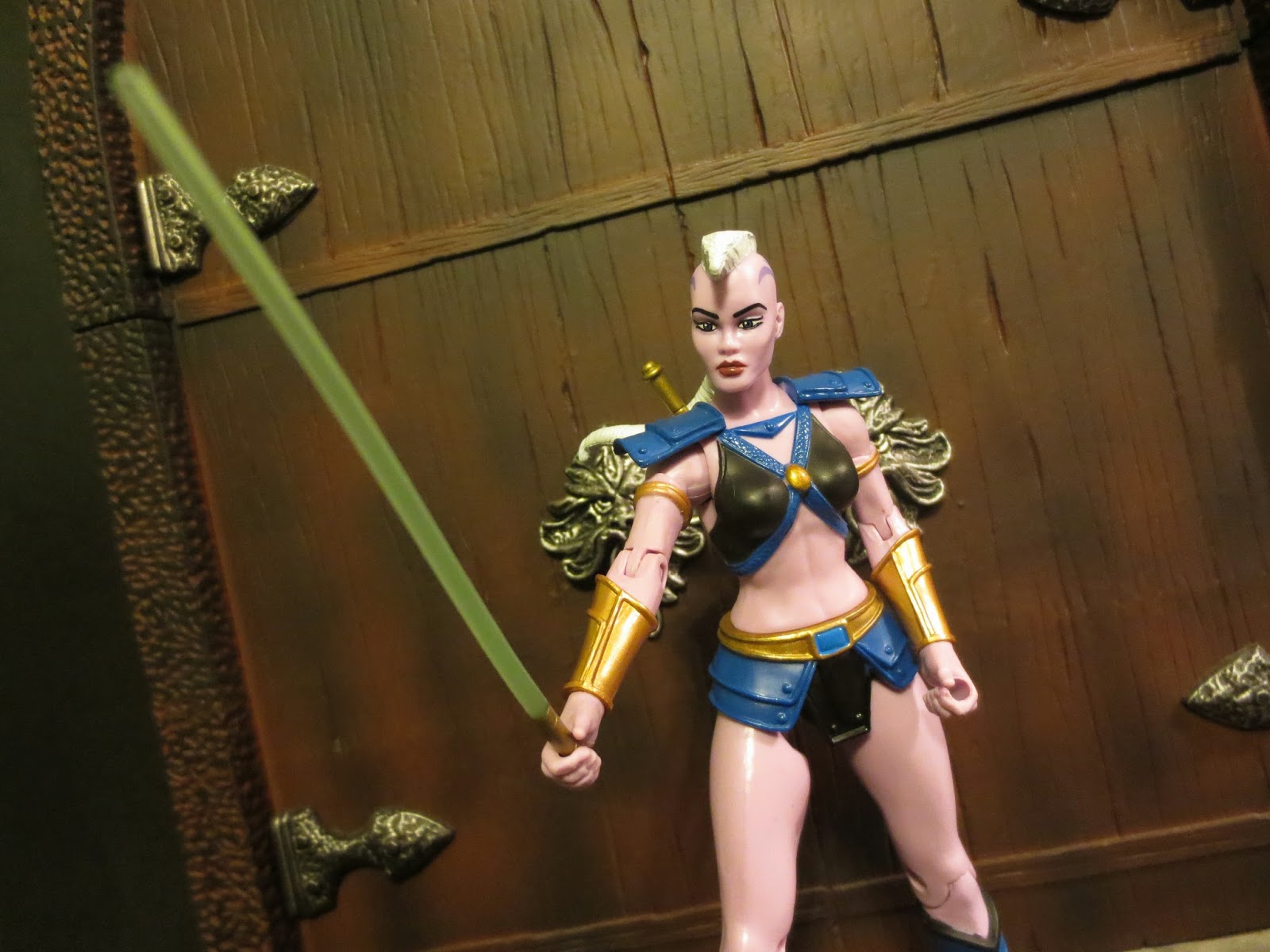 Huntara is honestly another really good MOTUC figure. She was not one of my most wanted figures but she is absolutely a well designed, well articulated, and sharp looking toy. She's also great because she really is a versatile character. If you're a She-Ra fan, Huntara can hang out with your Great Rebellion figures or with the Horde. If you're not a She-Ra fan and don't know who she is, she makes a great warrior for any faction. Heroic Warrior, Evil Warriors, Galactic Protectors, or Space Mutants: I don't think there is any faction where Huntara will look out of place. While I'm a bit disappointed that she's lacking the boot swivels and rocker ankles, she's still a stellar toy. I feel justified in giving this Silaxian warrior a Great rating since she turned out so well!