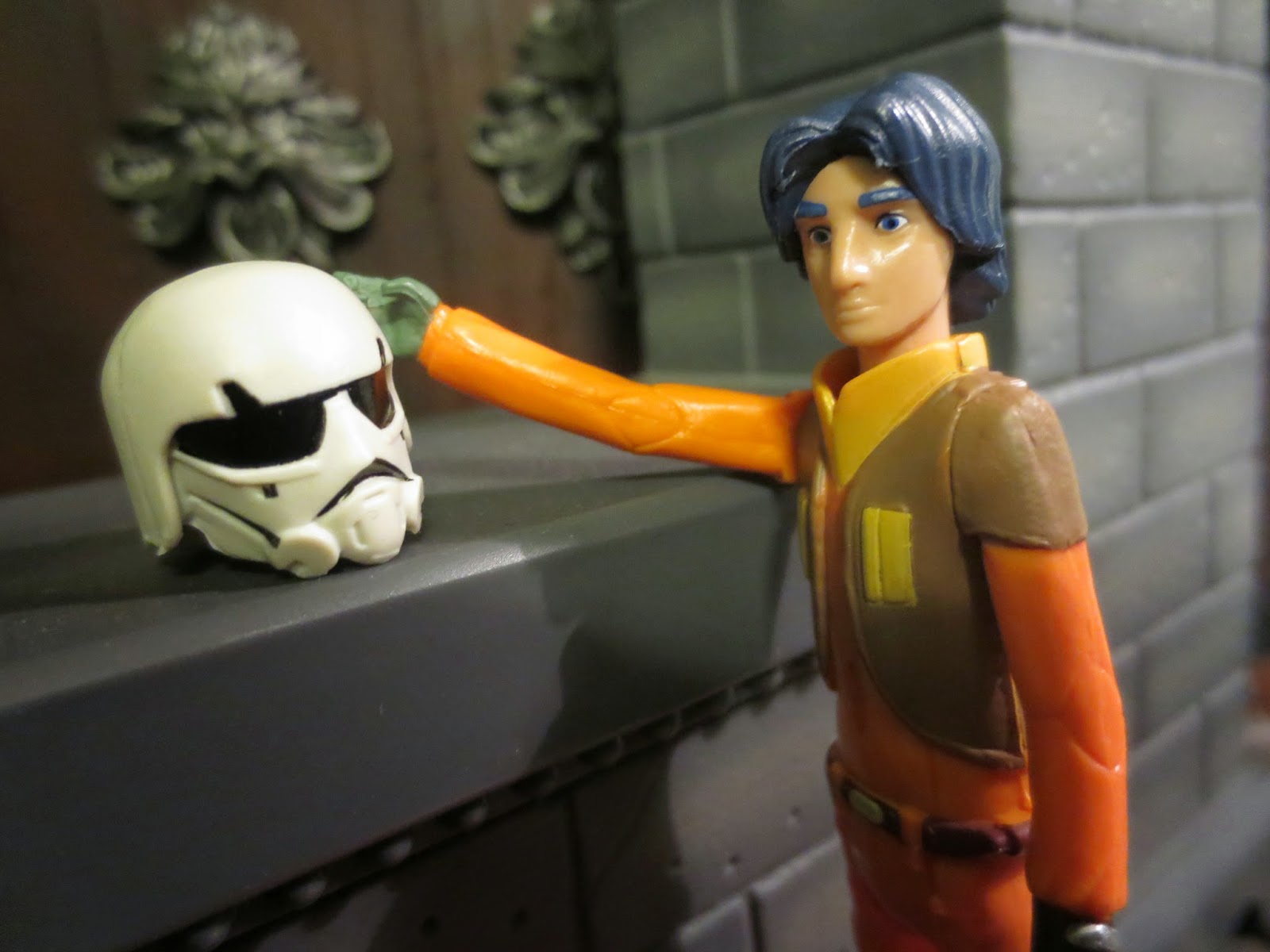 I'm still trying to assemble the crew of the Ghost from Star Wars: Rebels and, after much searching, I'm up to two crew members: Zeb and Ezra. It's Ezra that I'm reviewing today after having just found him in a Target. I'm not sure why (there are dozens of theories) but Hasbro cannot seem to get these figures out to stores. Here we are, six months after the premiere of the series and in a movie year, and Hasbro still cannot manage to get over the distribution problems that have plagued them since at least 2012. Anyways, I've managed to get this toy in hand so let's jump on to looking at Ezra after the break... 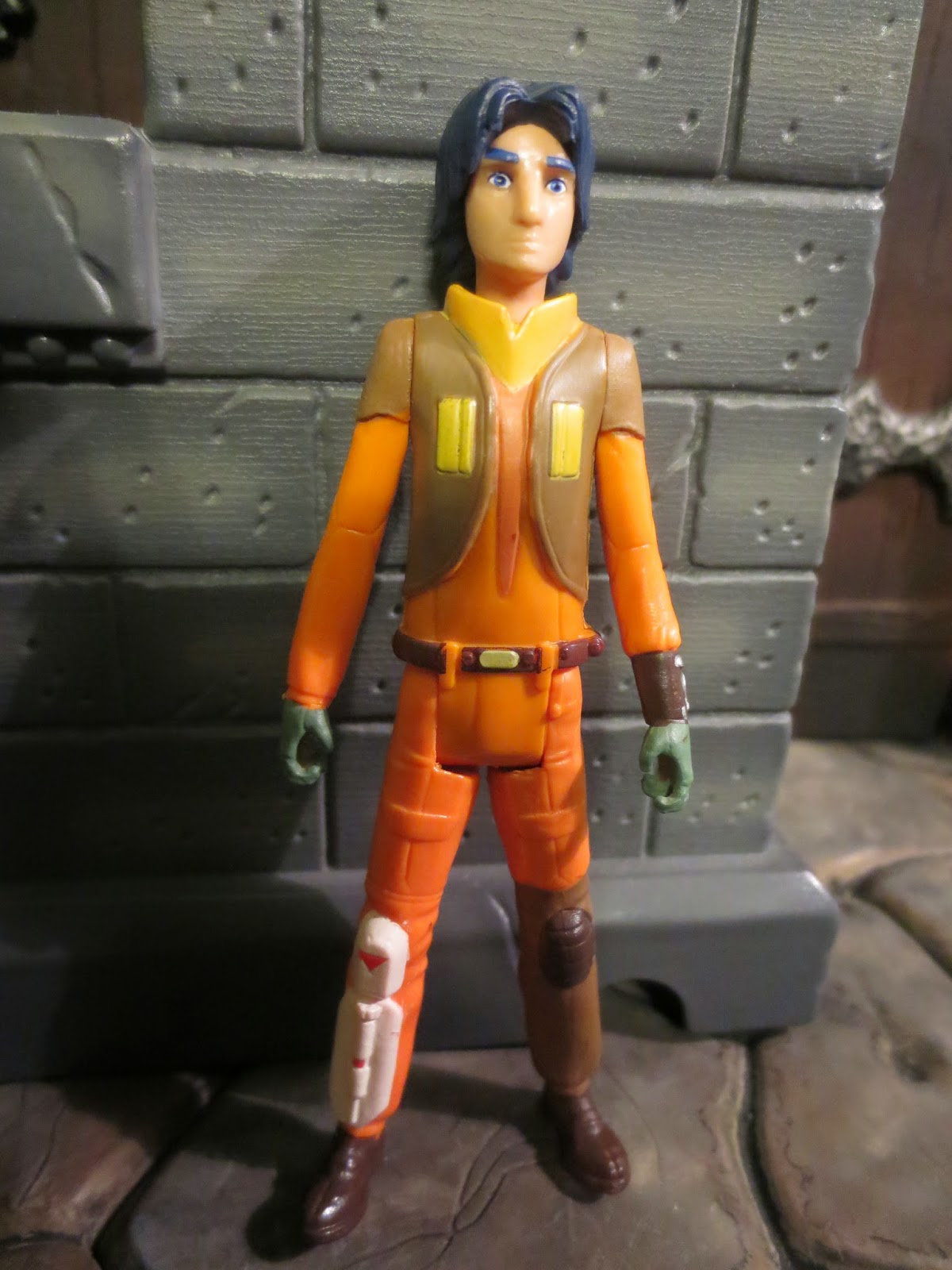 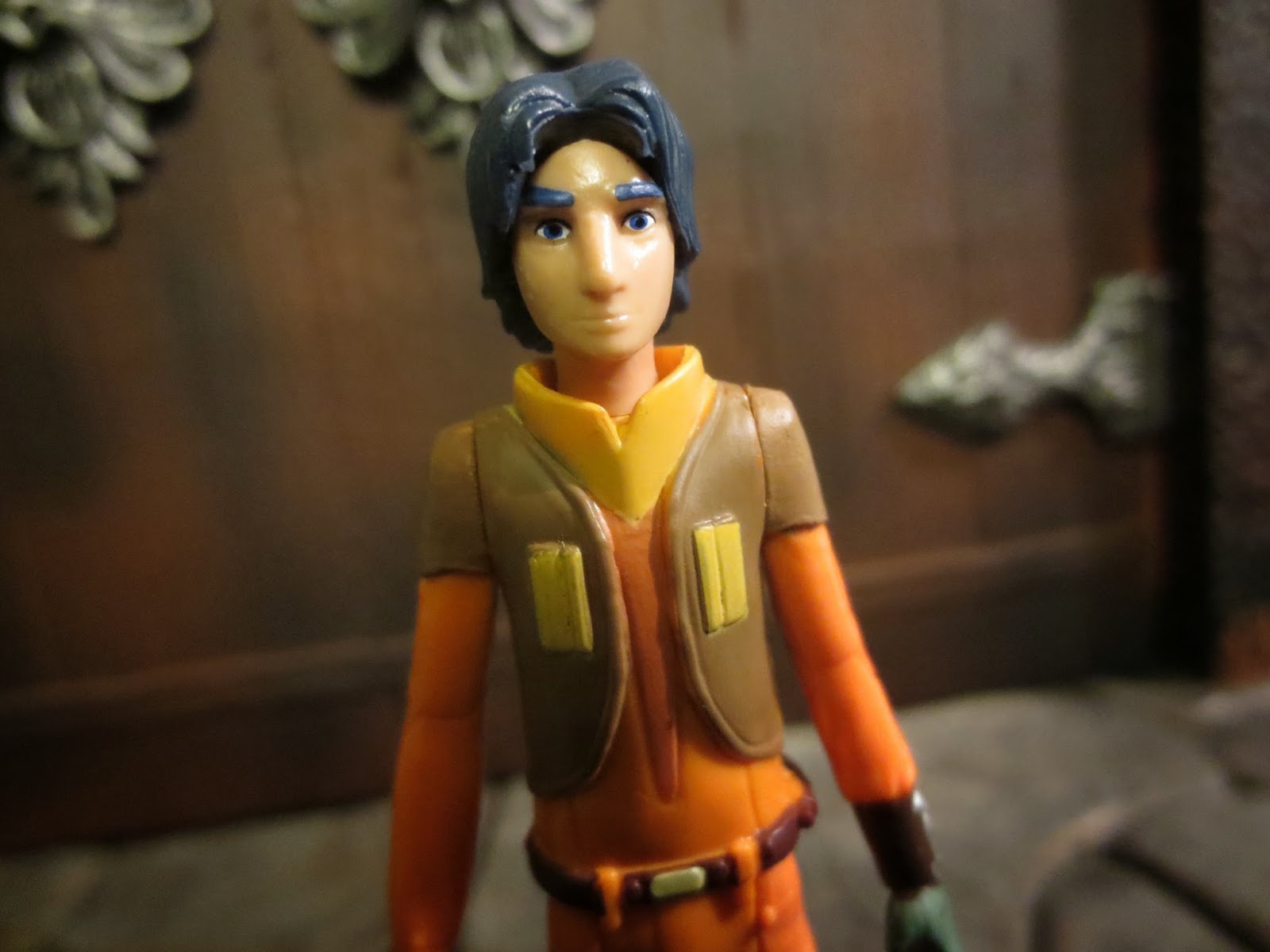 *Ezra looks very good and his outfit is covered with plenty of small details. His orange jumpsuit has stitched elbow pads and cargo pockets on the thighs while the left lower leg is ripped off. Ezra has the device on his left wrist that turns into a sling shot and some sort of scavenged armor on his right left shin. The headsculpt also matches the on-screen character quite well. 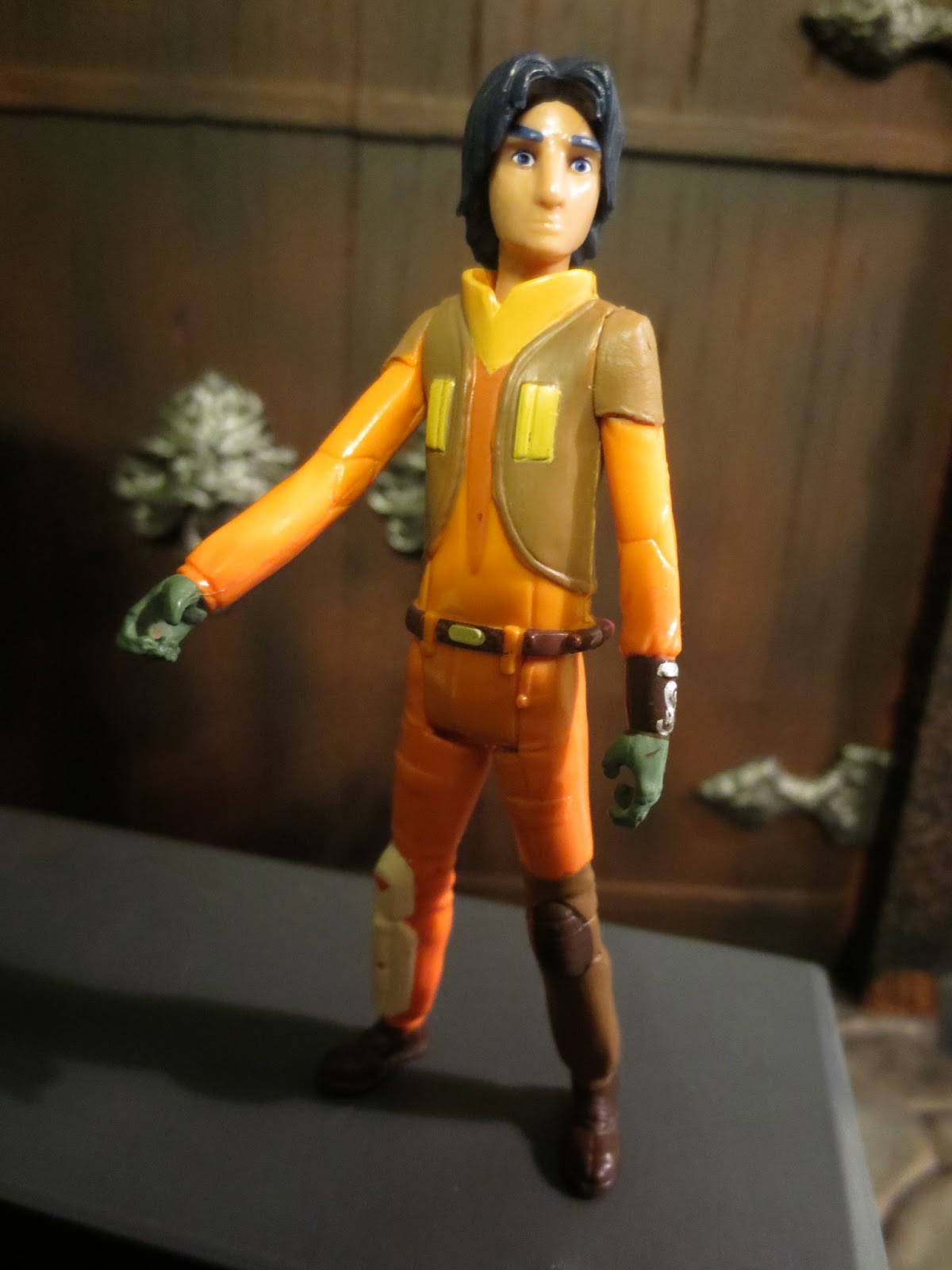 *The color scheme of Ezra's outfit is really eye-catching and just clicks with me. I like the combination of oranges and browns. There are also a number of small details that receive paint apps such s the belt loops, the cool logo on the back of the vest, and the details on the wrist piece. I also like how they handled his hair. It's the right combination of blue and black and looks great. 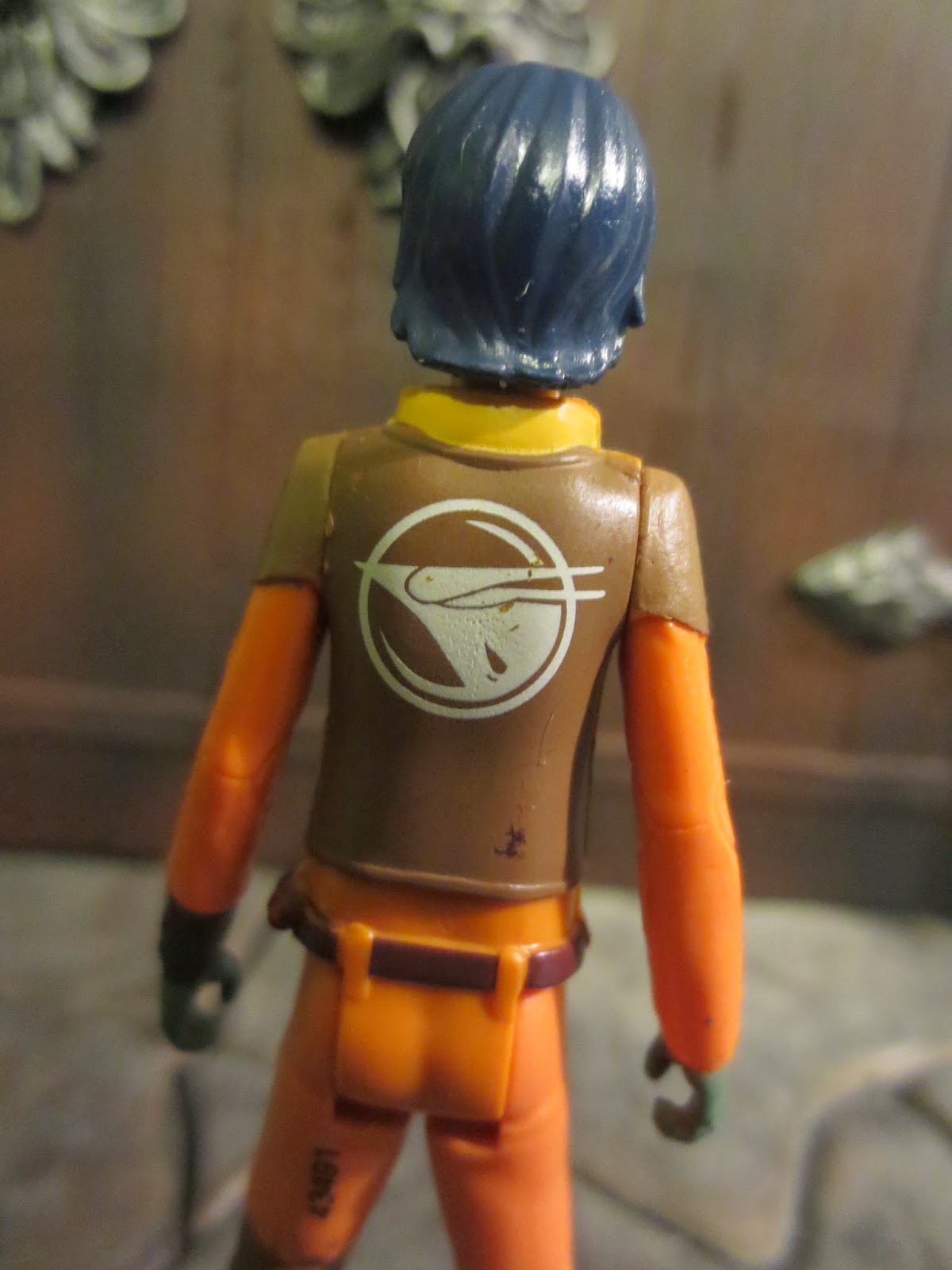 *Unfortunately, there is also a lot of paint slop on the figure. Many of the edges just aren't very clean and there are spots of errant paint on the his back left thigh, jacket, and right knee.

*I know the point of these toys is that they only have five points of articulation and keep costs down for Hasbro but would a swivel waist or ball jointed heads break the bank? It seems like just the addition of those simple joints would really help make these more appealing. 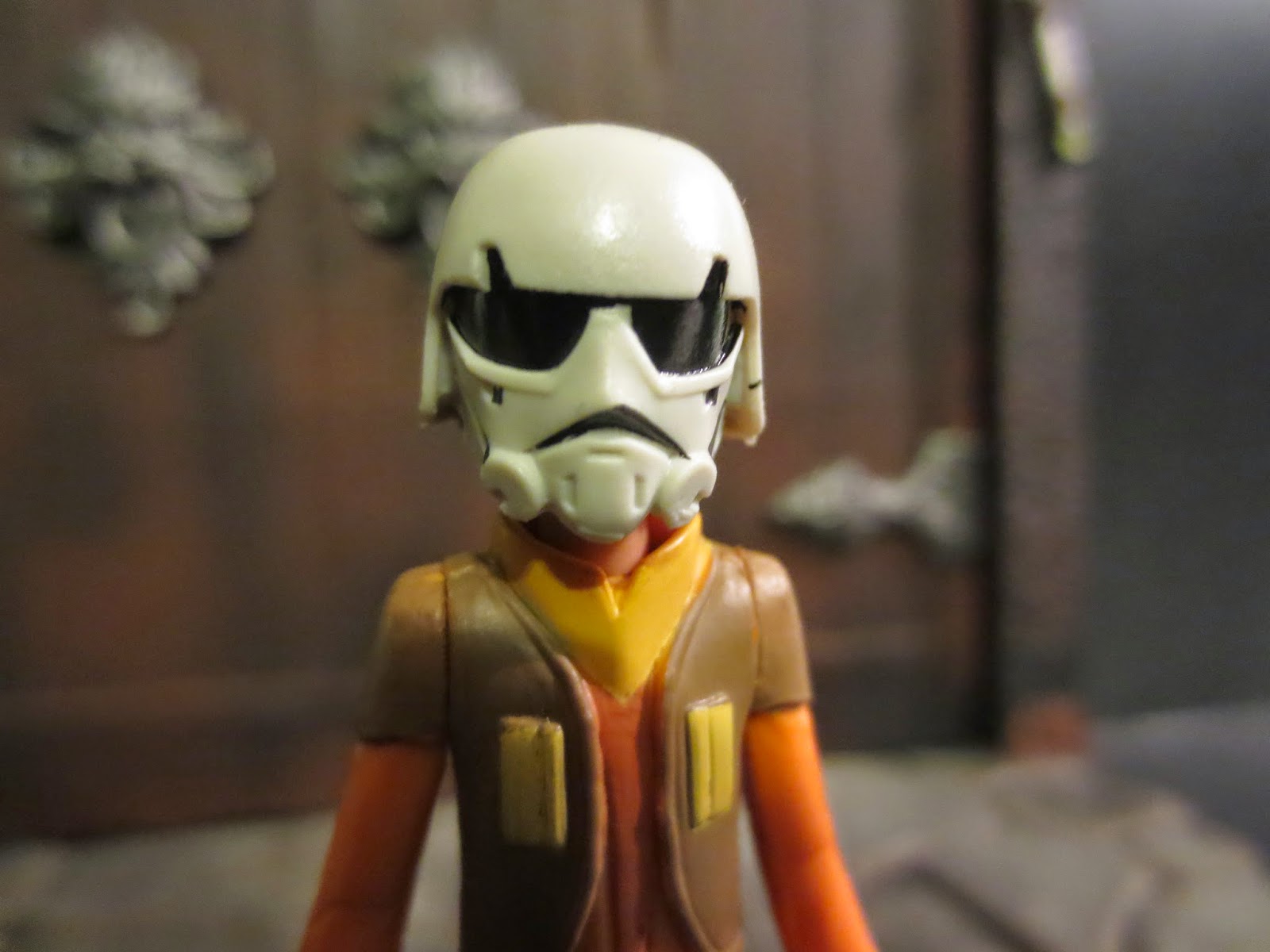 * Ezra collects Imperial helmets in the show so the inclusion of what looks like an AT-DP driver's helmet is a nice addition. Unfortunately, Ezra comes with nothing else. I think the biggest thing missing here is his lightsaber. Let's be honest: Hasbro thinks Ezra's lightsaber is significant to market it as a full sized role playing item, but they don't include it with the figure? That's a huge miss in my book, and no other accessory makes up for that. 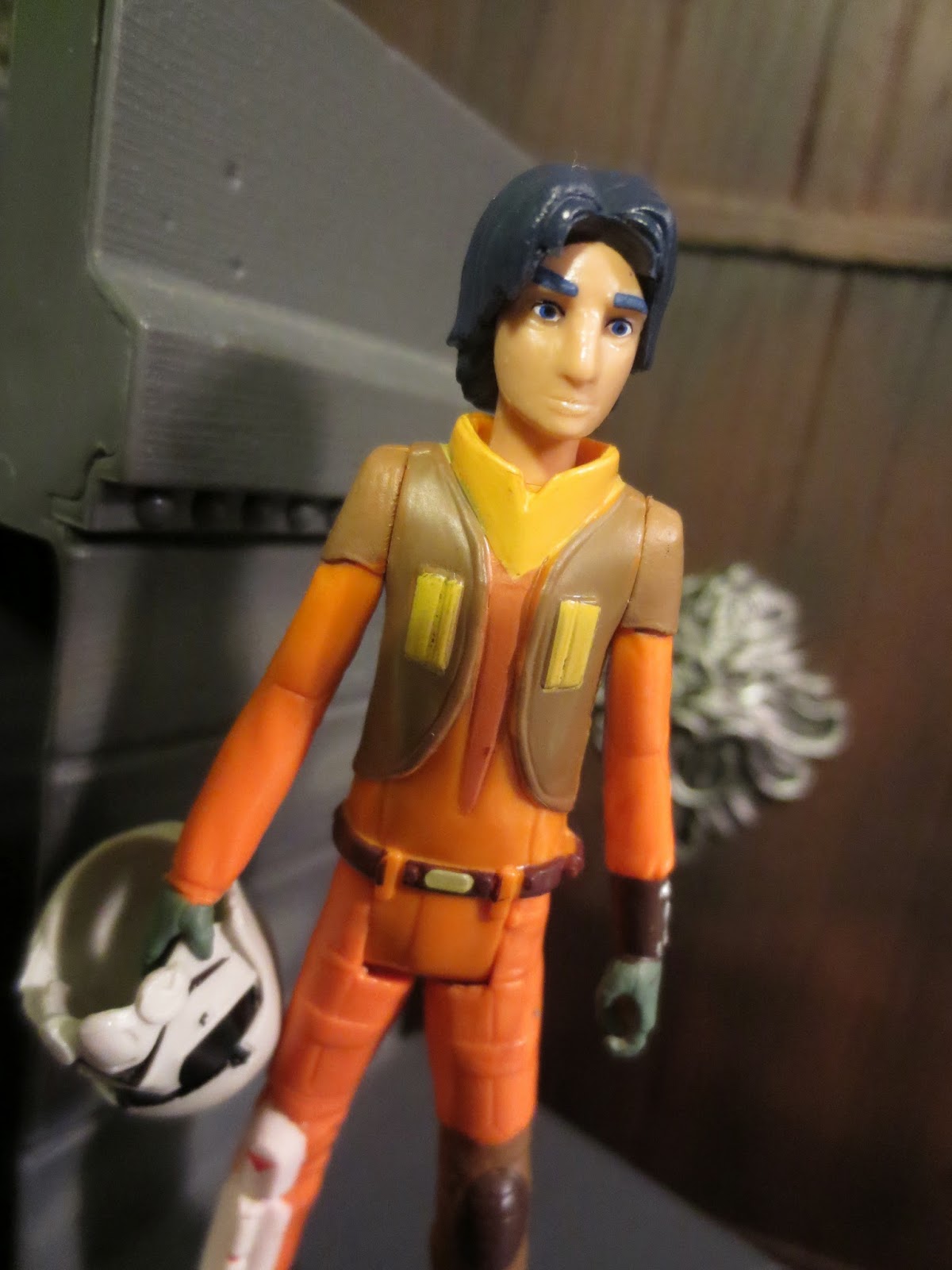 As a character in the show, I like Ezra. He's a younger character but he's fairly self reliant and competent. He's got a lot of growing up to do still, despite how well he's managed to live on his own, but he's maturing. I think it'll be interesting to see how he grows and develops over the next season of Rebels. Unfortunately, I just don't think is figure is hat exciting. Hera, Sabine, and Zeb come with their blasters, Kanan comes with his lightsaber, and Ezra comes with....a helmet? How does that make any sense? Ezra has two pretty unique signature weapons in his lightsaber with a blaster in the handle and his wrist mounted slingshot, but neither of those are apparently toy worthy. While you'll need Ezra to complete the Ghost crew, he's a pretty average figure at best. I'm giving him an Eh and a 1/2: if I didn't like the show so much and want to assemble the entire team, I would have left him on the shelf.

I've reviewed a few other Star Wars figures from the Rebels line:

I've also reviewed the following Star Wars figures from a variety of lines and scales: