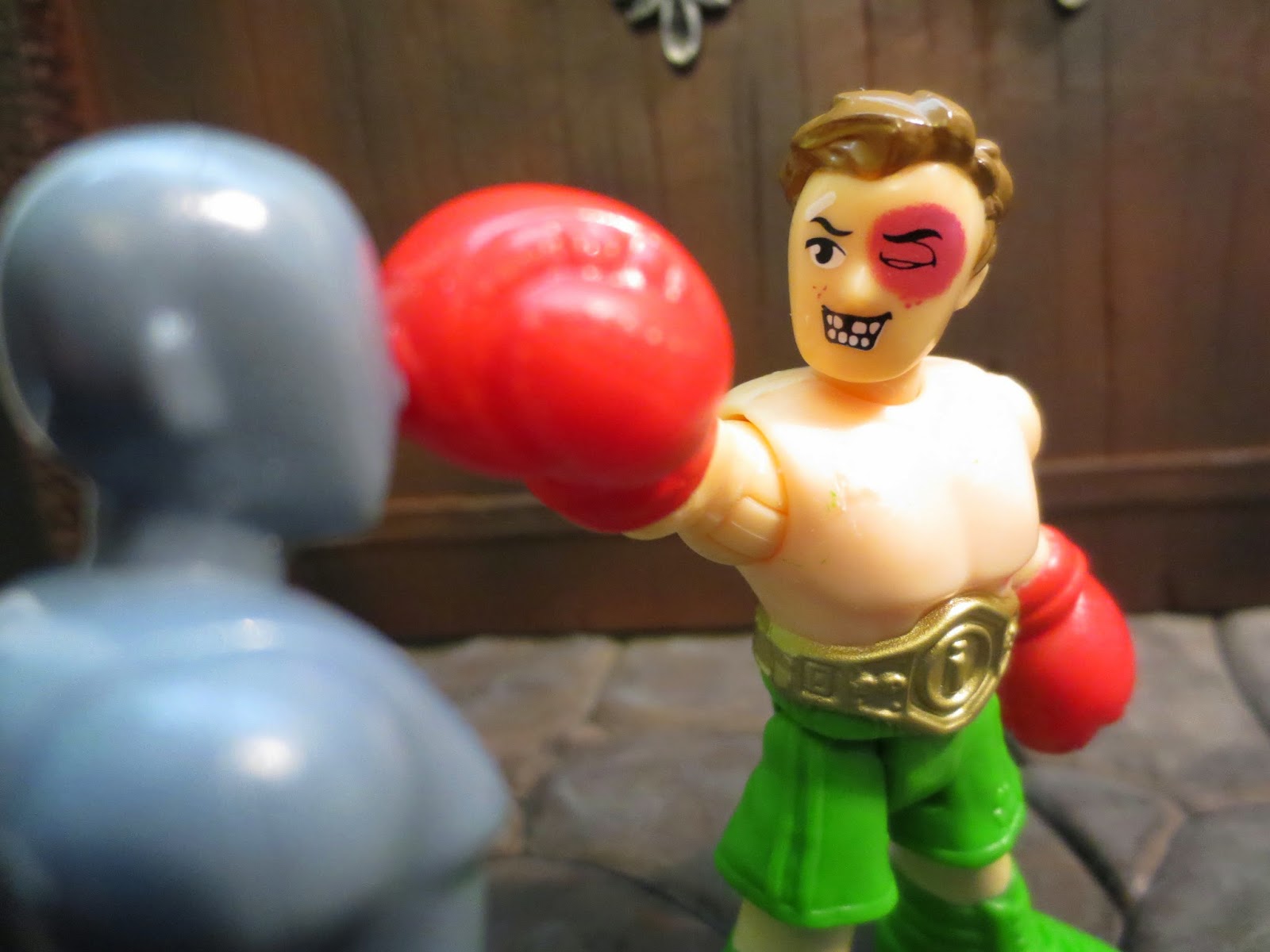 I hope you like Imaginext because I just got the entire fourth series of collectible blind-bagged figures in and I'm ready to go! While I haven't been reviewed much from the previous three sets of figures, I'm hoping to have series four reviewed in its entirety. Remember that these are sold in blind bags but the bags have a serial number on them that, at the least, makes it easy to know you are not getting duplicates and can help you identify the figures if you actually have the codes. These blindbagged Imaginext minifigures have been pretty diverse as to what they've offered including monsters, warriors, military guys, chemists, and sports figures. I'll be honest: Sports guys (and sports in general) usually bore me. I like boxing. Well, I've never seen a real boxing match, but I love the Rocky films, Raging Bull, the G.I. Joe figure Big Boa, and the Simon and Garfunkel song, so I'm giving this guy a shot. Ready for a look at the Imaginext boxer? Then join me after the break... 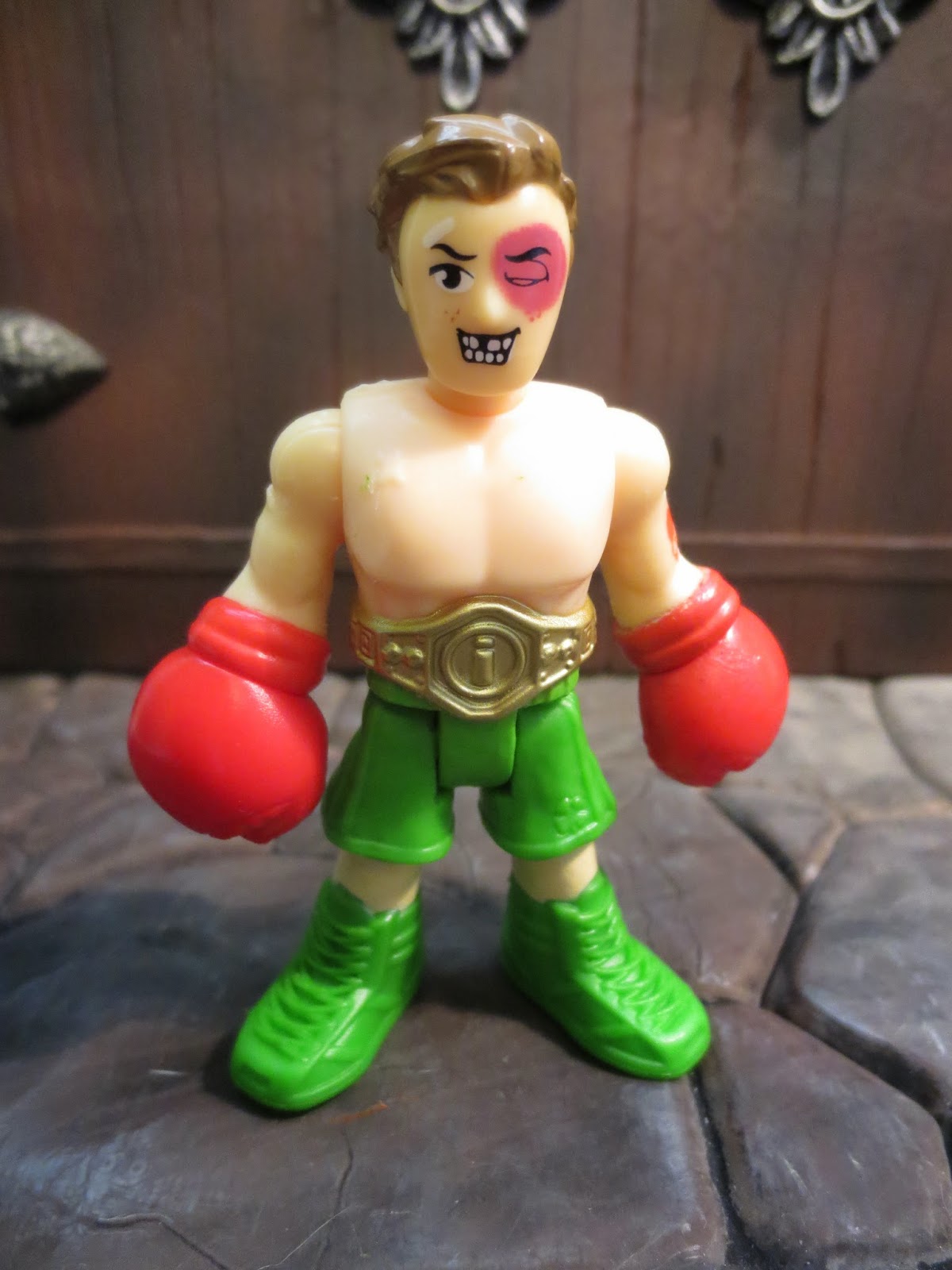 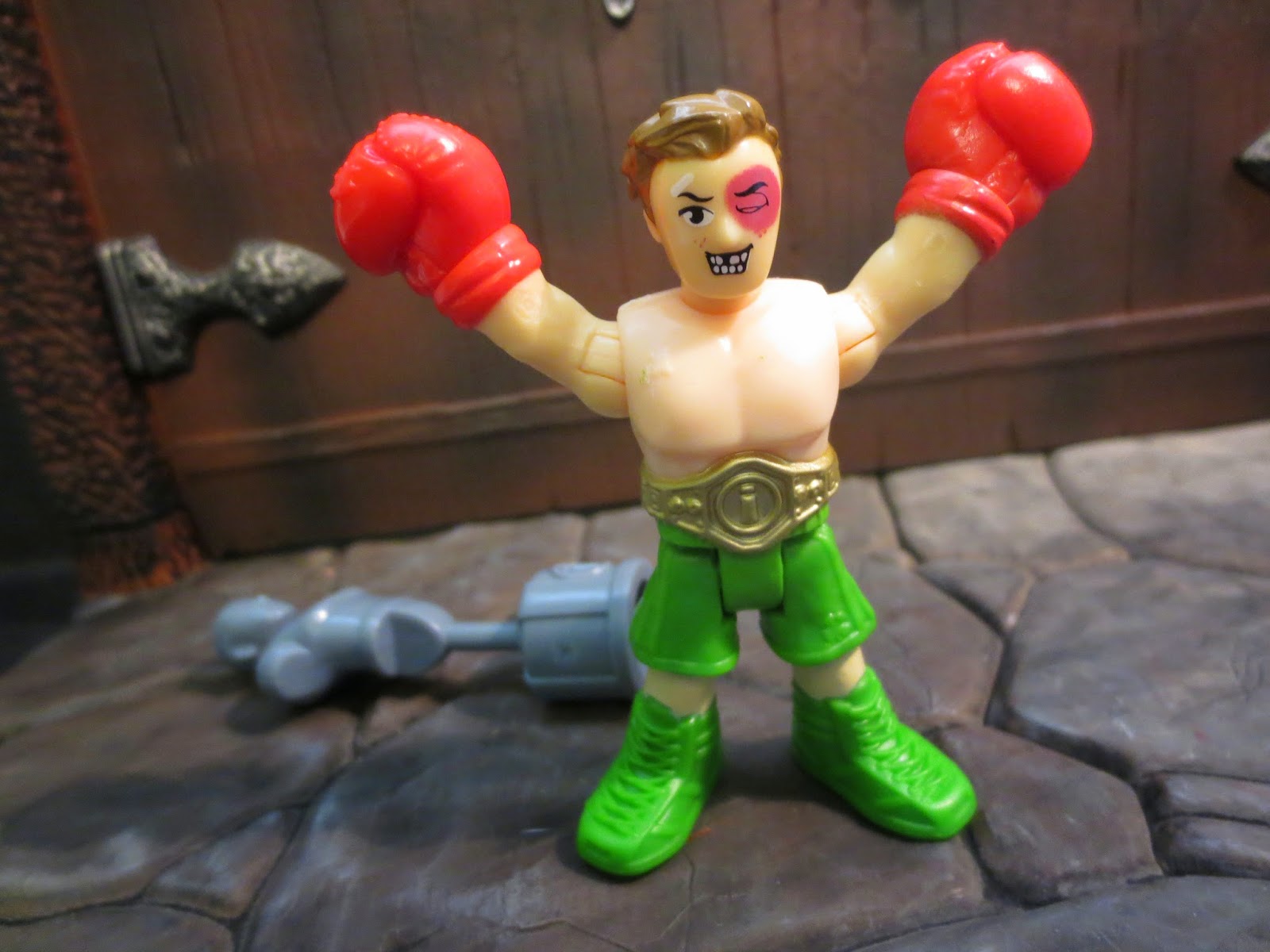 99% of Imaginext figures have the same articulation but they're all very durable and fun to play with. You an get some great simple poses out of this boxer particularly due to the swivel/hinge shoulders and the swivel wrists.
Unlike other blindbagged minifigures like Lego and Playmobil, Imaginext figures mostly have unique bodies with a mixture of elaborate sculpted details and some nice paintwork. I love the head on this guy: The painted grin with a missing tooth and the bruised and battered black eye are pretty great looking. Notice, also, the "Mom" tattoo. This guy definitely calls his mom. You should too. Call your mom, not his I mean. 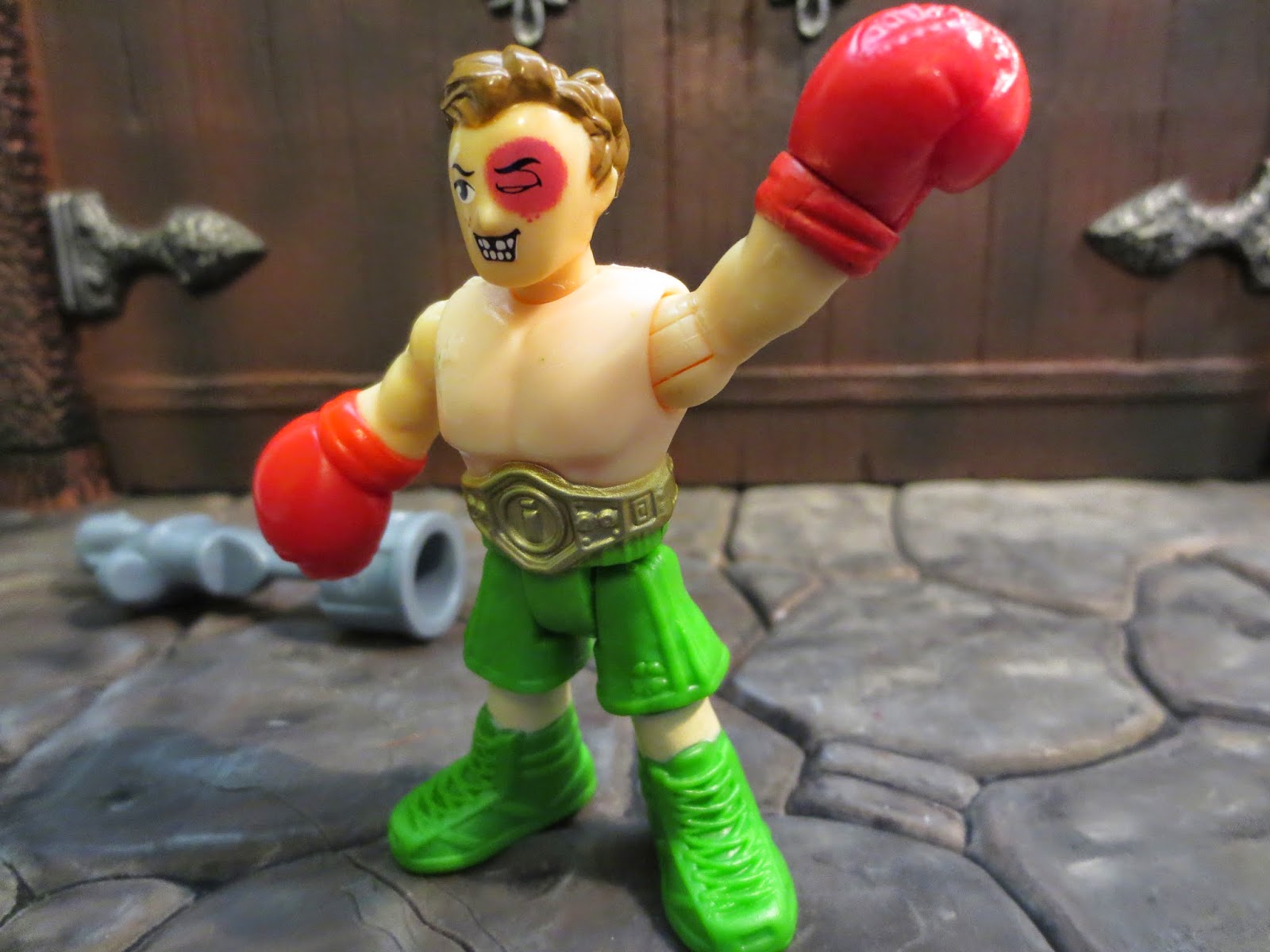 I like the sculpted championship belt and the athletic shoes he's wearing. Thee isn't a lot of paint detail here but the belt does have the Imaginext "i" logo. There's a blue and yellow "i" logo on his left shoe, too.  The gloves look great and have stitches and a patch sculpted onto them. There's also a scar on the boxer's right chest. 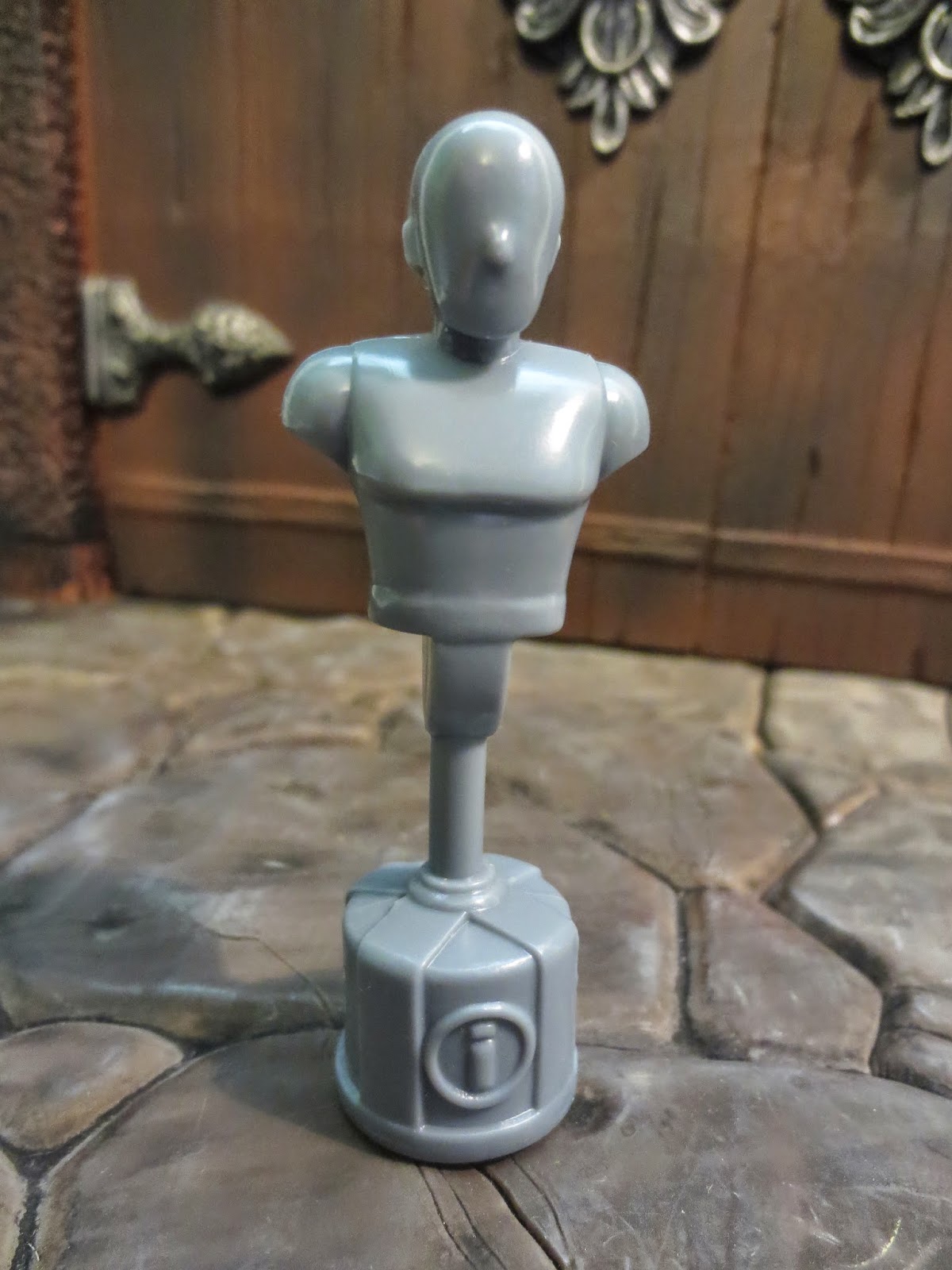 The boxer comes with a training mannequin. It's a simple but cool little piece that he can practice his punching on. The mannequin pictured on the little paper insert that shows all of the figures in the series features a bronze colored mannequin although I think I do like this gray version better. It looks more like athletic equipment to me. 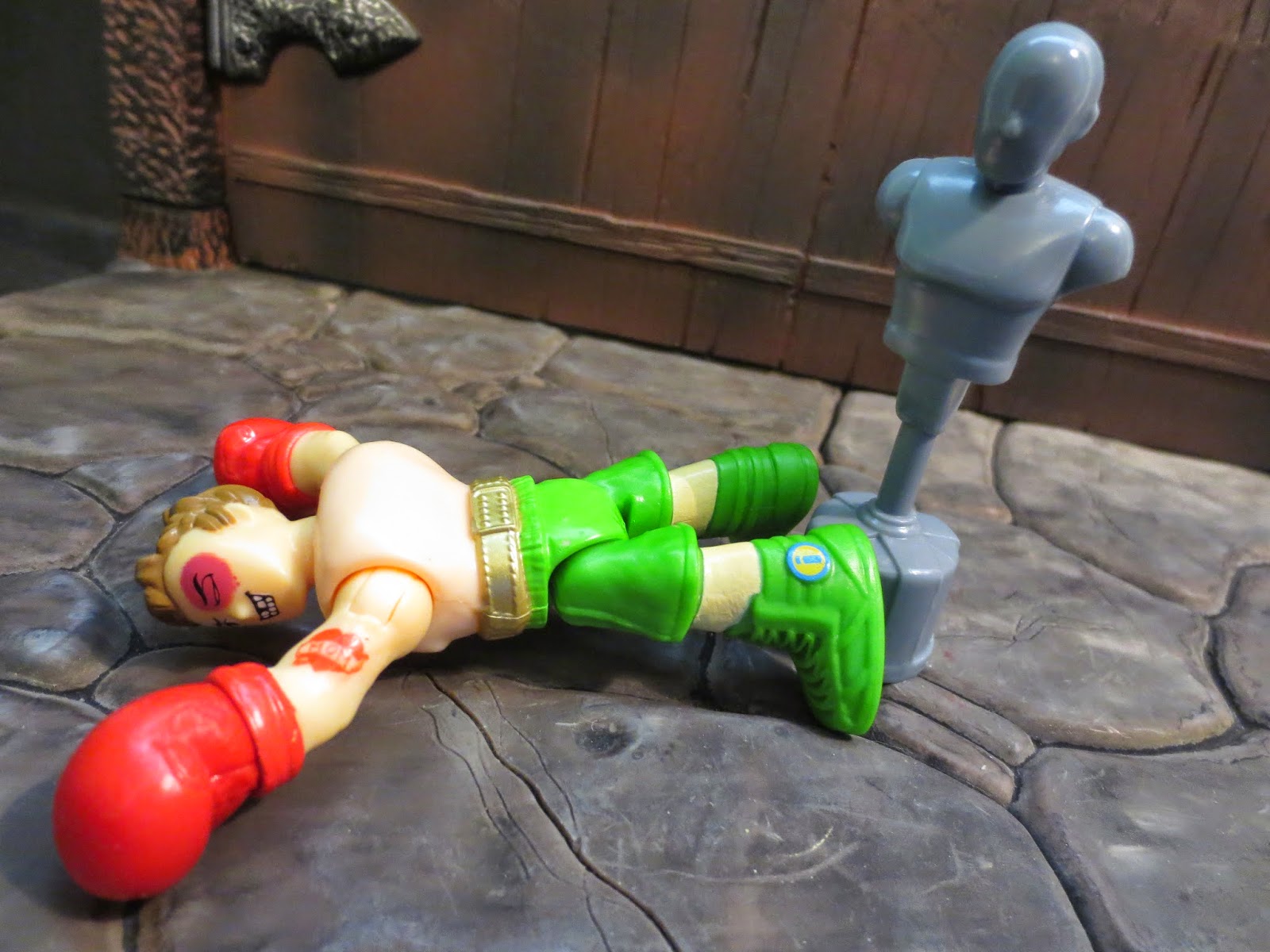 Imaginext figures are a great combination of collectible "imagination" toys like Lego or Playmobil with traditional action figures. While the boxer isn't my favorite figure thematically, I have to admit that the great painted face, the little details like the chest scar, tattoo, and the training dummy really win me over. He's a fun figure to play around with even if he's harder to fit in to any of the pre-existing Imaginext themes. I'd easily give this guy a Great and a 1/2 rating just because of how well done he is. He's da boss, and, for what is clearly a kid's toy, I like how he carries the reminders of every glove that laid him down and cut him till he cried out, "Adrian!"