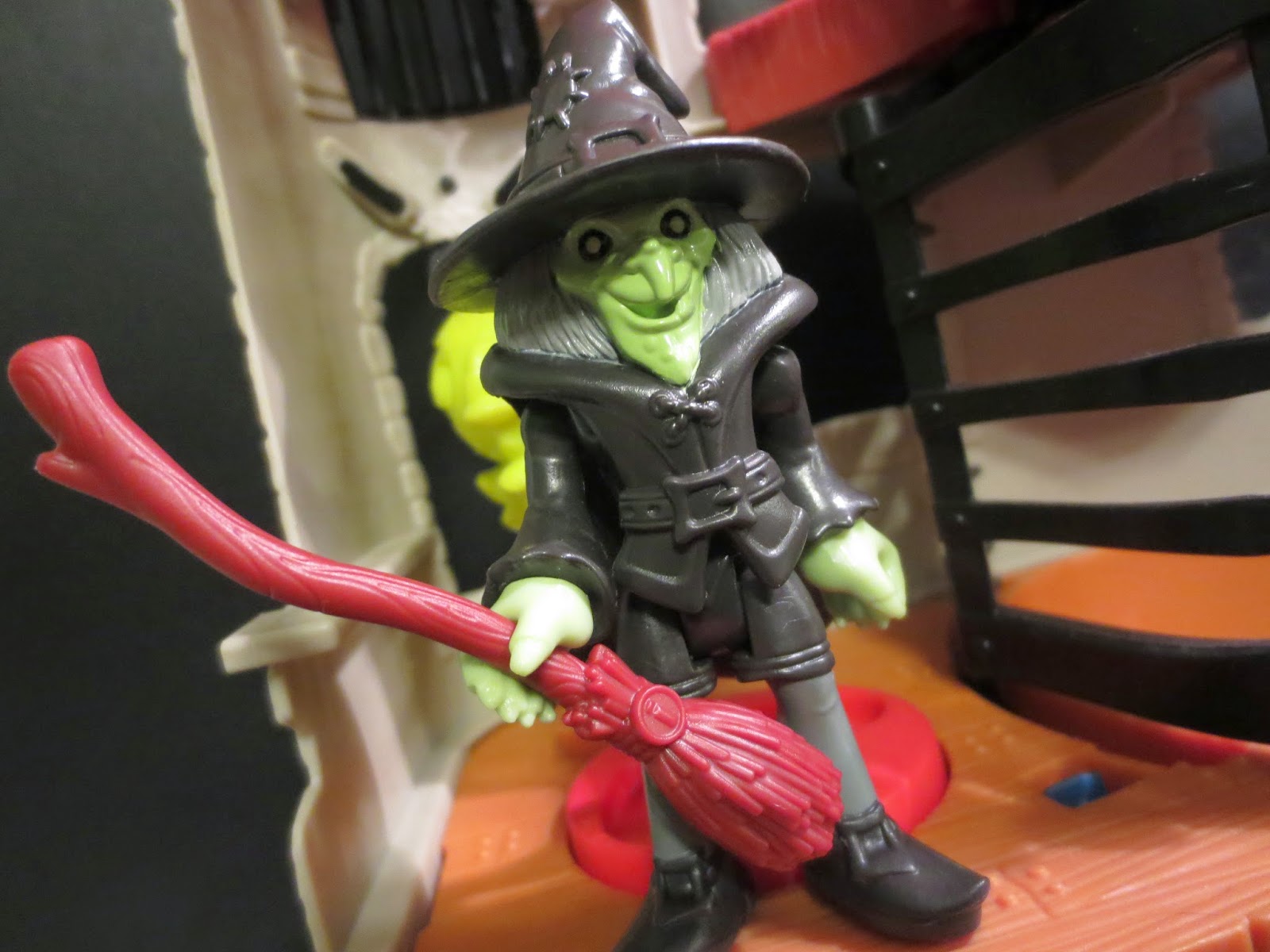 Over the past few sets of blind-bagged Imaginext figures Fisher-Price has given us some great horror themed figures. We've gotten a Mummy, Dracula, the Gillman, Frankenstein's Monster, and a Zombie. While many of us were expecting a Werewolf in series 4, the inclusion of the Witch was a nice surprise. One of the coolest things about this witch is that she fits both of the witch archetypes due to the removable costume. With it on she's your typical scary old hag.Take it off, however, and you've got the classic sexy witch. One thing that Imaginext has done throughout the line is create some cool homage figures. Whether it's series 1's "Not-James Bond," series 2's "Not-Crocodile Dundee," series 3's "Not- Walter White," or even this series' "Not-Julius Erving," there's always a figure or two that makes you look twice. The Witch is one of those. While a green witch is pretty much a public domain character, I have to wonder if she's intended to be based on Elphaba from Wicked or on Gruntilda from the Banjo-Kazooie video games. In Banjo- Kazooie, Gruntila could go from looking like this to looking like this, kind of like this figure. Ready for a closer look at this classic Witch? Then join me after the break... 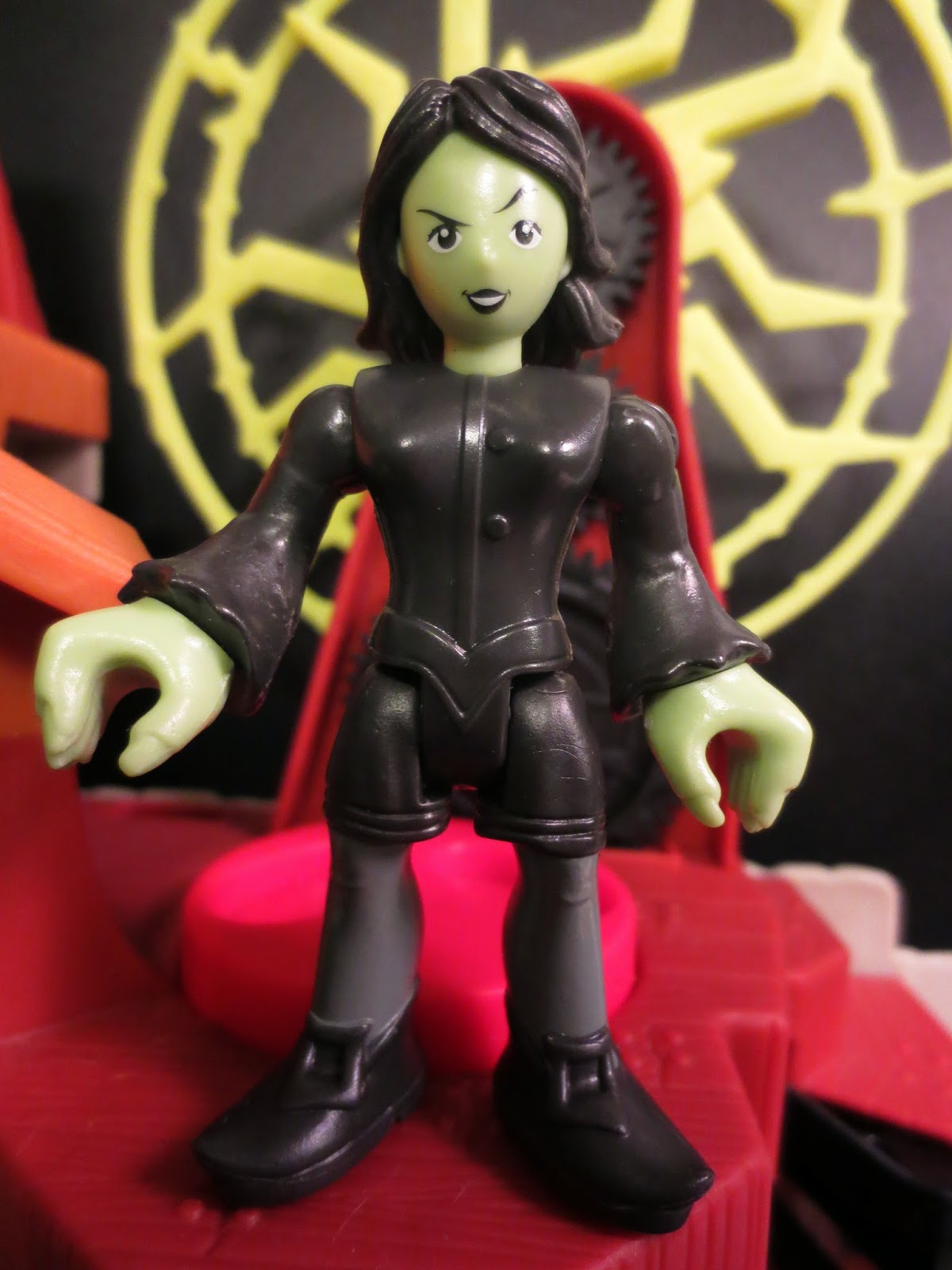 Accessories: Witch costume and a broom. 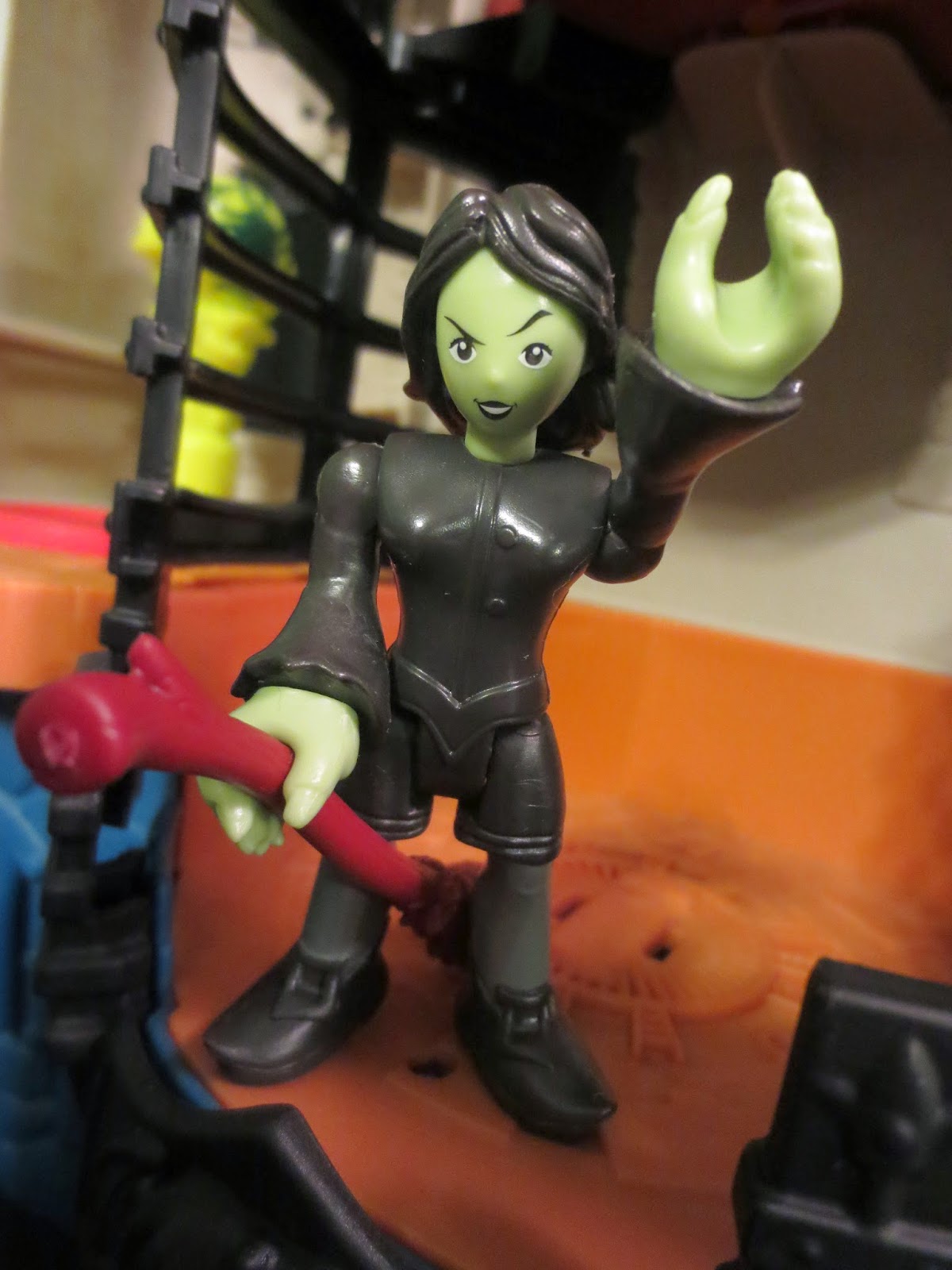 *As always with Imaginext, the Witch is sturdy and well assembled. She manages to nicely meld the stylized Imaginext look with the more curvy female form. She looks great in a number of poses but I particularly love that she can actually hold her broom in such a way that it looks like she's getting ready to take off for a flight on a brisk October night! 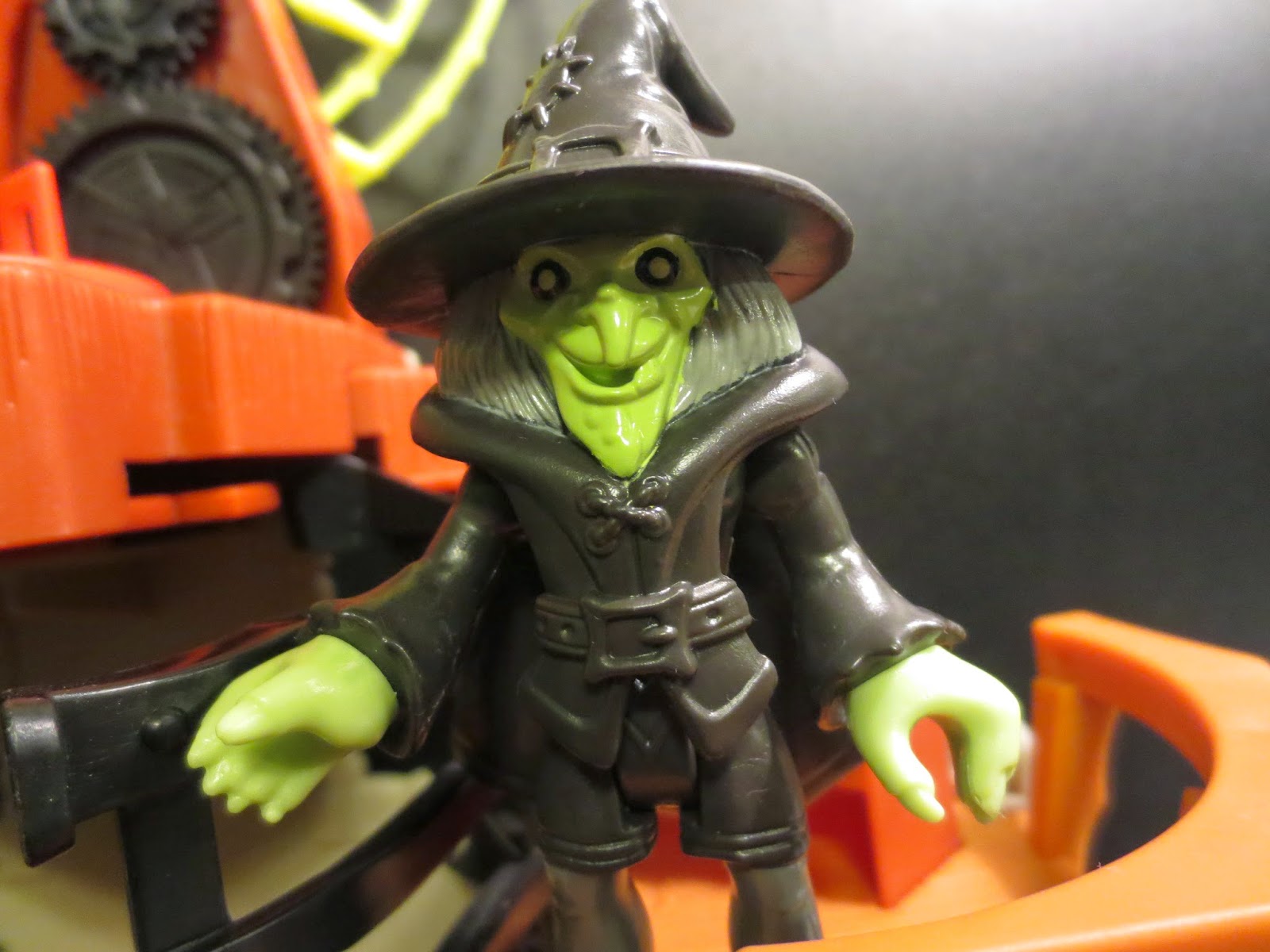 *  The Witch's main accessory is a single "outfit" piece that slips over her head and torso. It covers her svelte frame and replaces her greenish good looks with a more traditional witch. Yellow eyes, long gray hair, warts on her chin, and a long hooked nose. She's also now wearing her traditional witch hat and a cape. This is not just a cool accessory but it's a great way to effectively give buyers two figures in one.


*  No matter which witch you're displaying, it's great to have a broomstick for her to ride. It'sa nice sculpt with visible bristles on the sweeping part and visible wood grain on the handle. There's even a little Imaginext "i" symbol there, too. 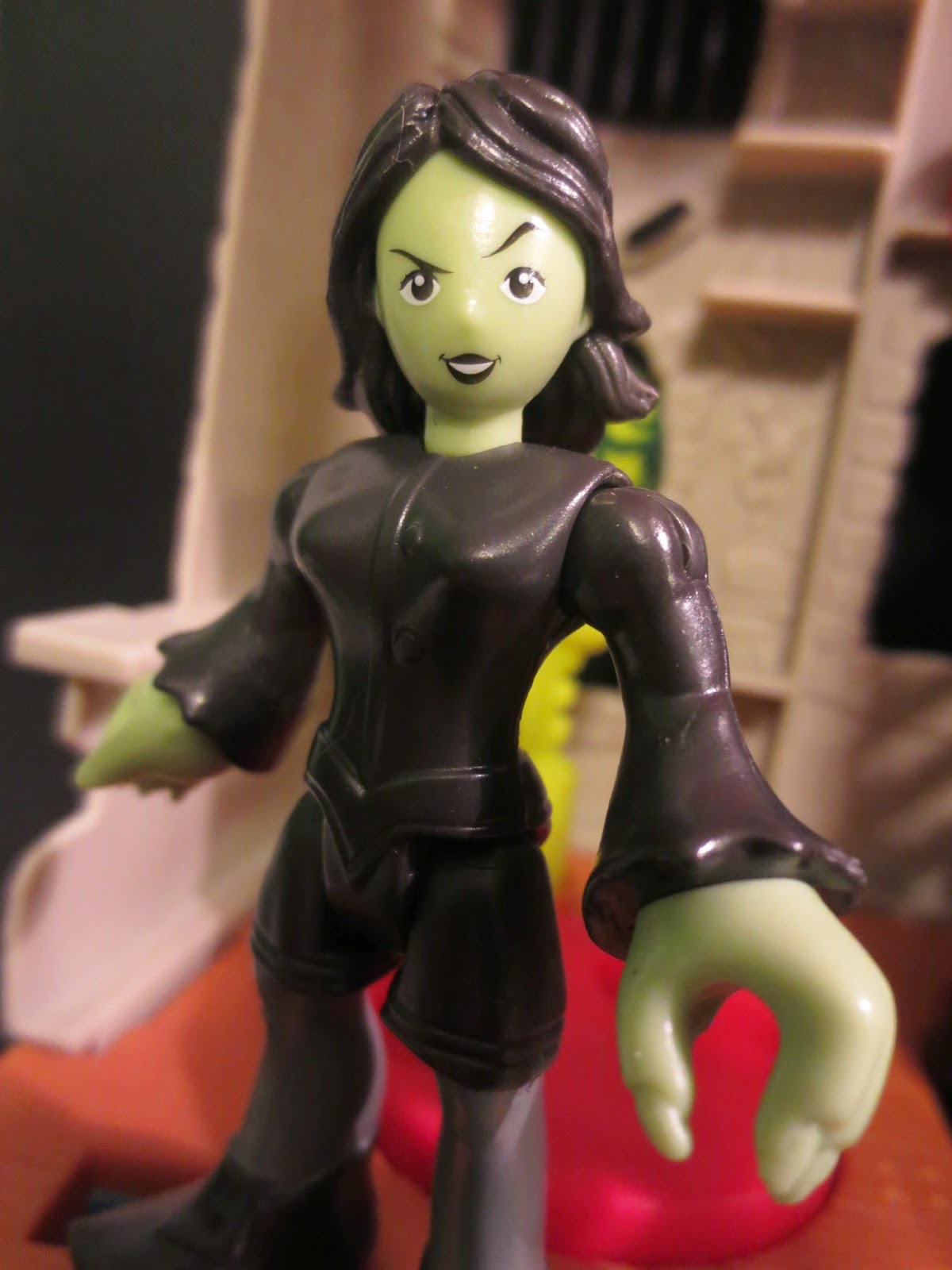 * I love the sly look on her face! Her hair came out really well and the expression on her face is great. It's confident and sassy, which are two great qualities in any witch. As you can see in this picture, she's also got some long nails.

*Umm.. I don't really have any. This figure really hits all of it's marks from the top of the witches hat to the bottom of her pointy buckled shoes. 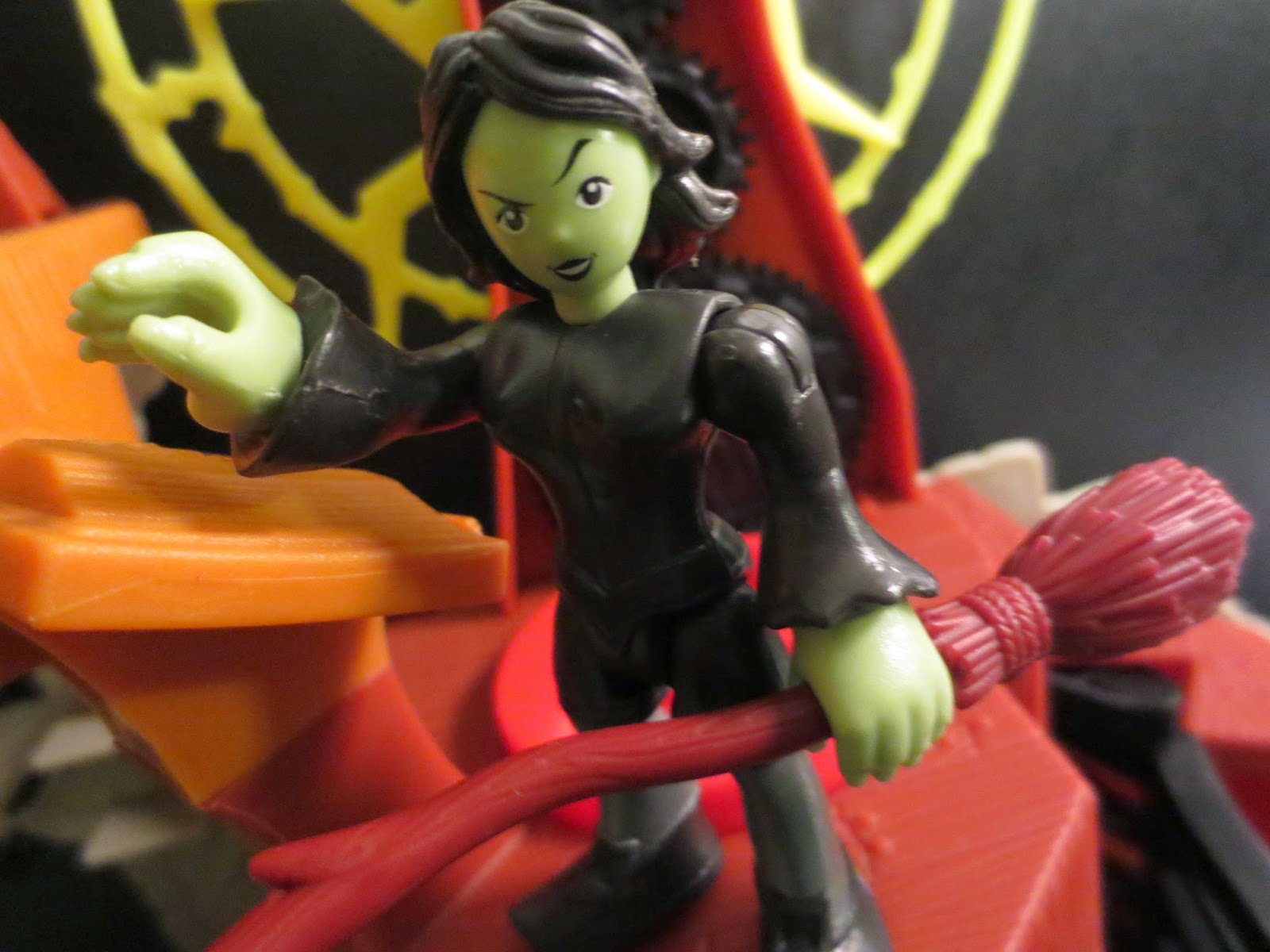 I'm a big fan of this figure. I thought that the Space Gorilla was going to be my favorite figure from series 4 but the Witch ended up stealing the show. She's just too cool. There's a lot of creativity and fun in this small toy and it shows the great things that the Imaginext team is capable of! I'm easily giving the Witch an Epic rating. Want to know something else cool? While it's no secret that Imaginext has utilized plenty of Masters of the Universe vehicles and elements, is it possible that now they're even utilizing old Masters of the Universe concept art? At one point a design was created for a witch concept to be introduced into Masters of the Universe that looks somewhat similar to this Witch. Of course, it was a pretty generic witch, so maybe it's just coincidence, but it's interesting to think about the possibility isn't it?

From this series, I've also reviewed the Snowboarder, the Basketball Player, the Space Gorilla, the Clown, and the Boxer. I've reviewed a few other Imaginext figures, including:

I've reviewed a couple of other witch related items:

And if you're all about green skinned girls:
Octavia from Masters of the Universe Classics
Gamora from one of Hasbro's 2.5 inch Guardians of the Galaxy two-packs
The Martian Spy Girl from Trendmasters' Mars Attacks! line
Posted by Barbecue17 at 4/22/2015