I'm not saying that the Space Gorilla is a reference to Captain Simian & the Space Monkeys; I'm just saying that Captain Simian & the Space Monkeys had a toyline made by Mattel in 1996. Of course there are plenty of other space monkeys out there so maybe Mattel/ Fisher-Price were just channeling all of them. Anyways, Space Gorilla is another figure from the fourth series of the Imaginext Collectible Figures and he might just be the coolest figure in this series. Ready for a look at the high flying daring Space Gorilla? Then join me after the break... 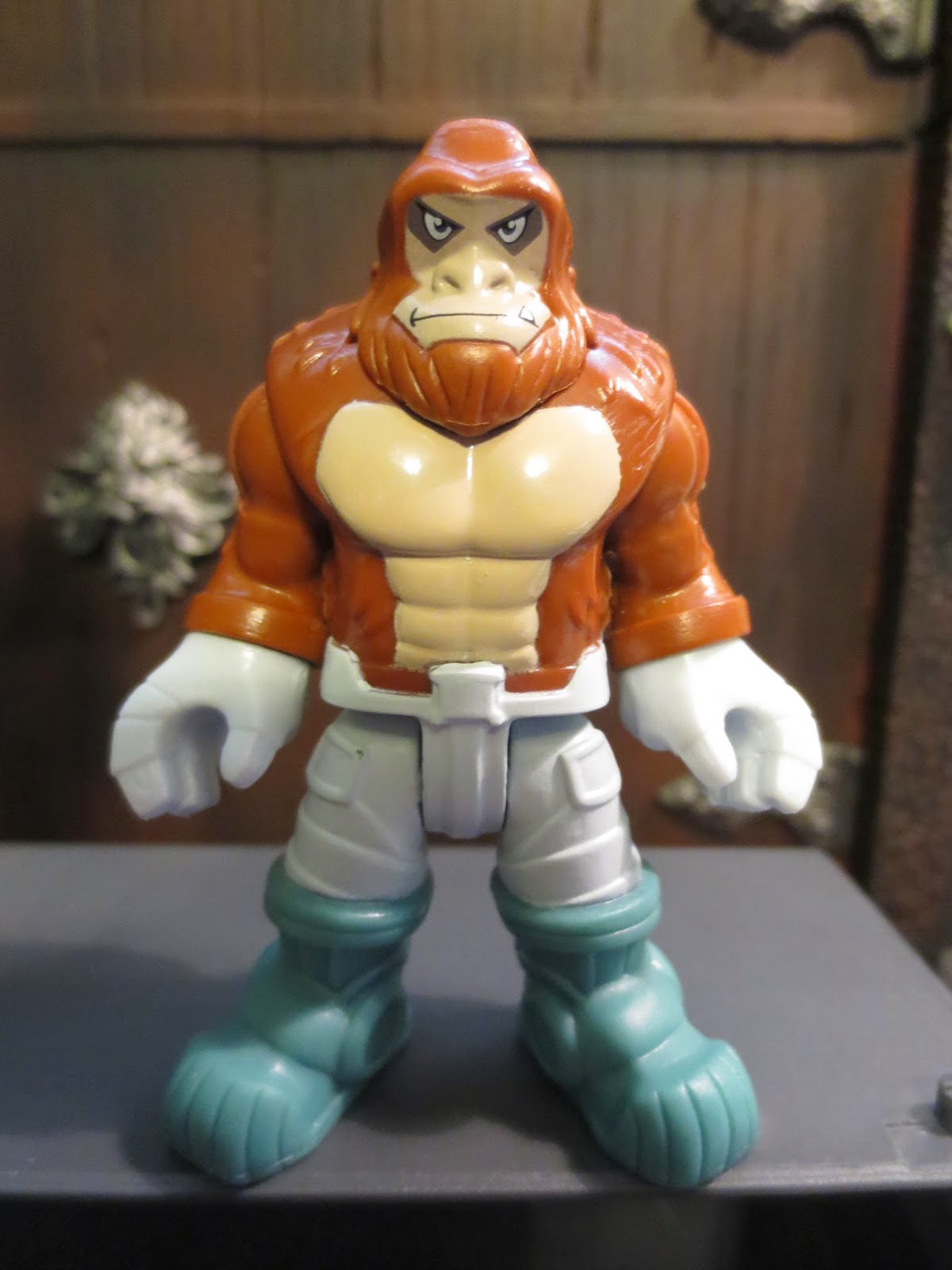 *The overall concept of this figure is just too entertaining! A space gorilla? Absolutely. Imaginext really works some fun concepts into their line and I find the unusual or offbeat characters so much more entertaining. This guy would mesh well with the current space line and possibly even with the Justice League offerings. 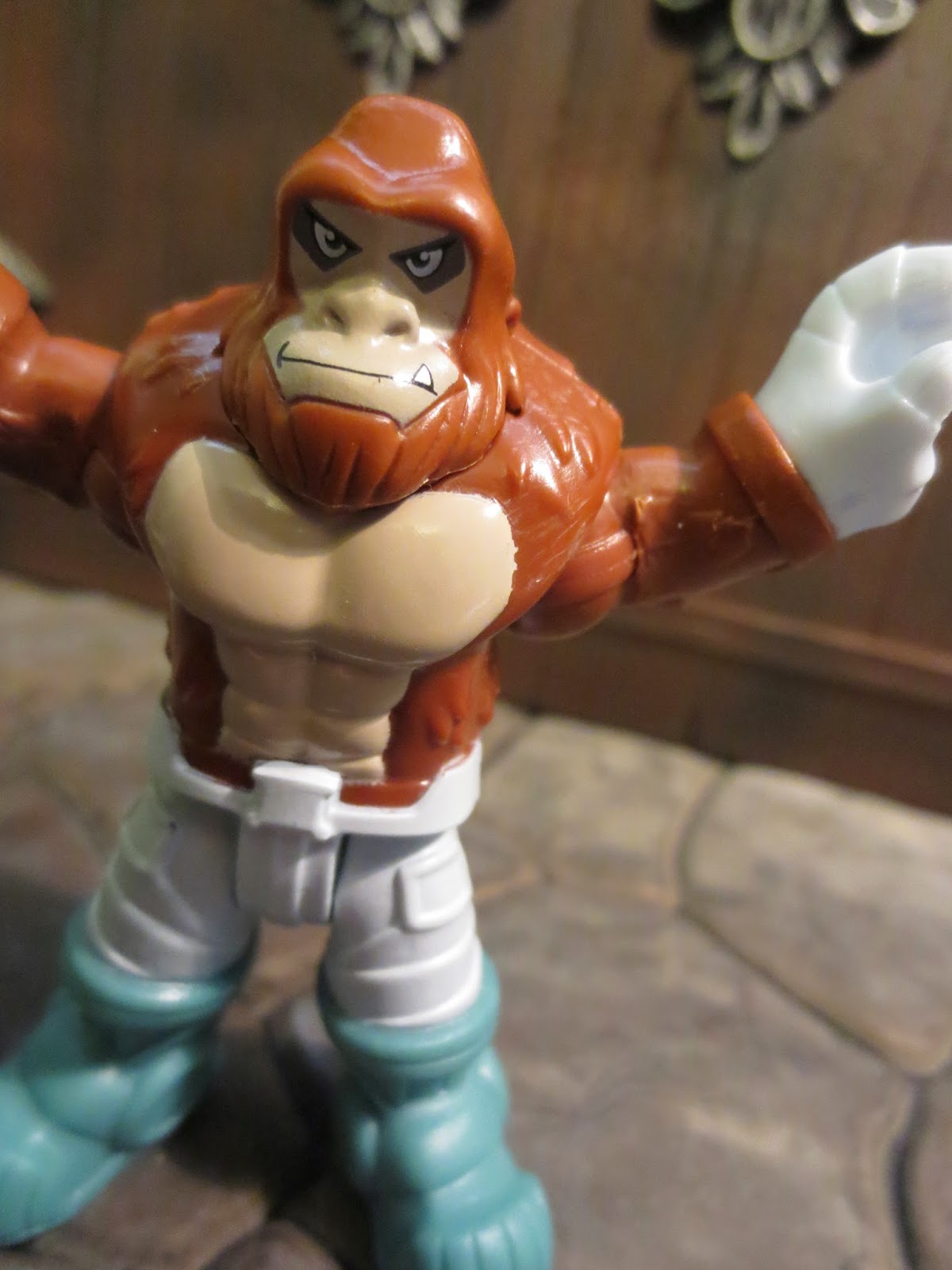 *The sculpting is really nice on the figure. The Space Gorilla looks solid and muscular with little tufts of fur on his torso and arms. The head sculpt is great and the stamped face details definitely bring him to life. The gloves and boots have a very comic book like aesthetic to them and definitely make this figure feel like a comic book character. 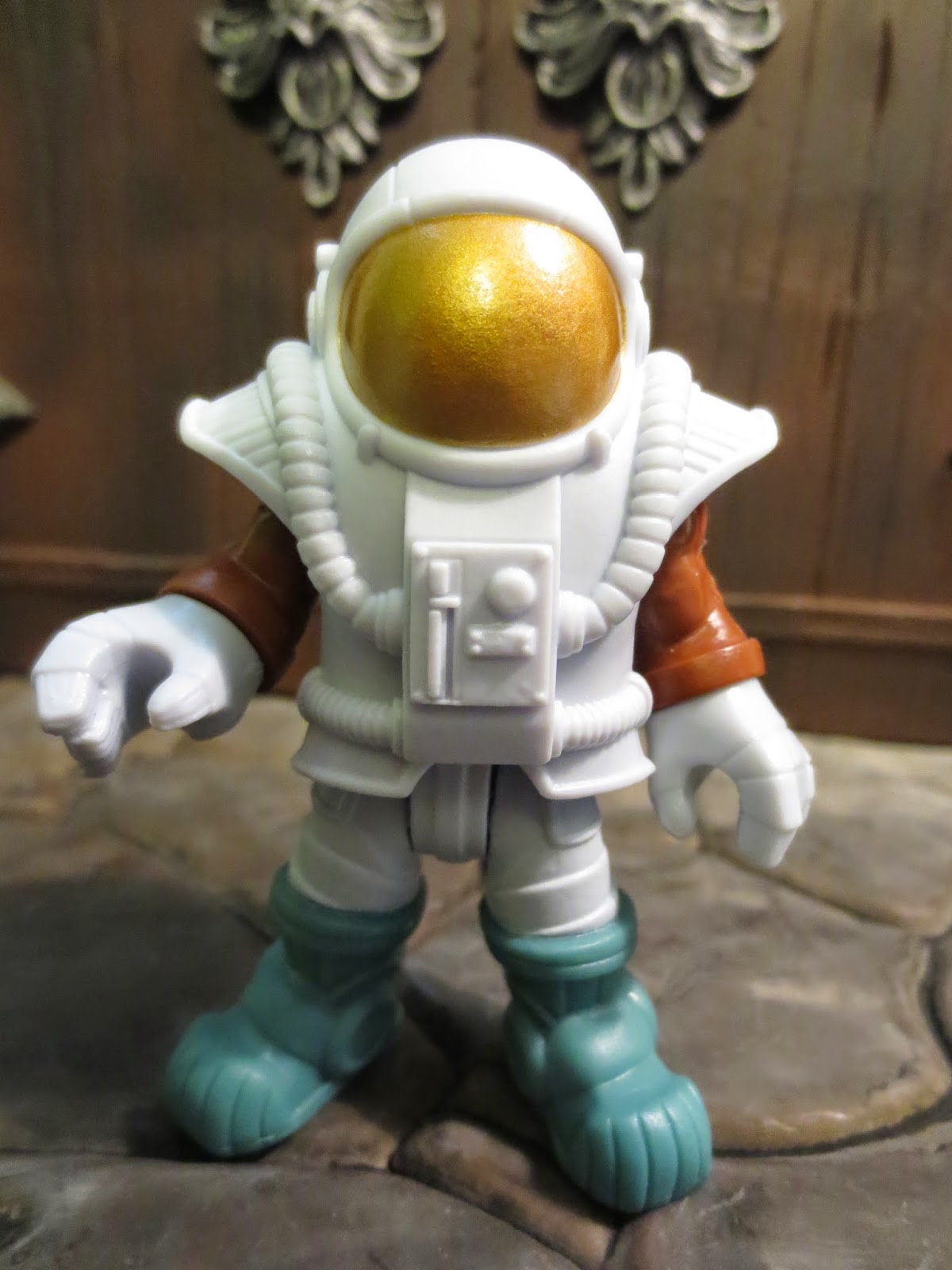 *A soft plastic helmet completes the Space Gorilla's look. It easily fits over his head and features plenty of tubes and a backpack with a relief of the Imaginext "i" logo. The helmet's face shield is painted in a metallic gold and preserves the mystery of who is inside the suit. Well, except for the fact that hairy gorilla arms are exposed. 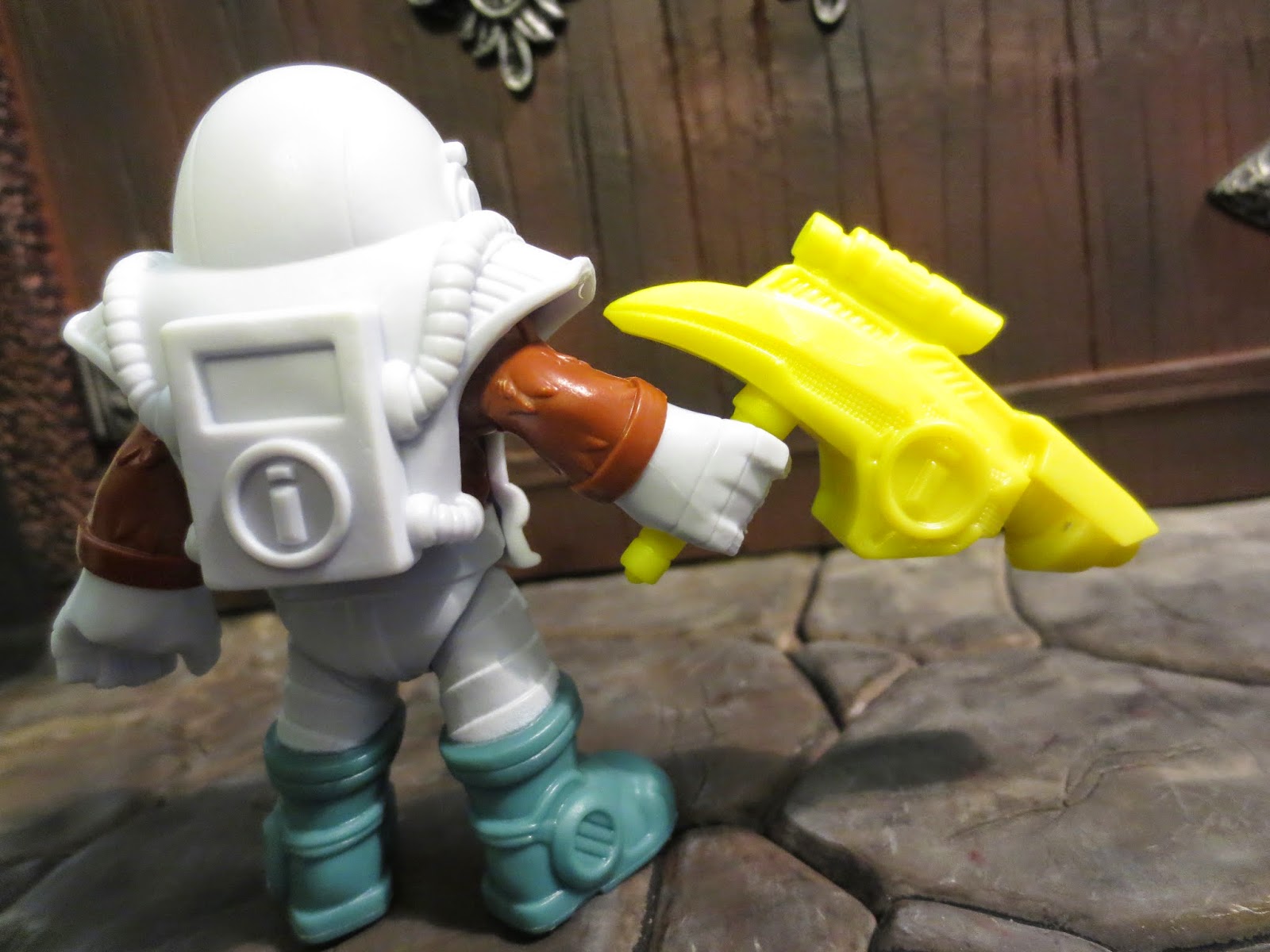 *To aid in his interstellar adventures, the Space Gorilla comes with a very cool laser rifle molded in a neon banana yellow plastic. The gun is nicely detailed, fits in the gorilla's hands well, and kind of resembles a banana. It even has a scope for combat at a distance. Nice! For some reason, I'm now reminded of Tracy from Filmation's Ghostbusters. Anyways, I like this gun. It also looks really cool with the Snowboarder.

*I'm not really bothered by this but I will mention that the Space Gorilla's head doesn't swivel unlike most other Imaginext figures. 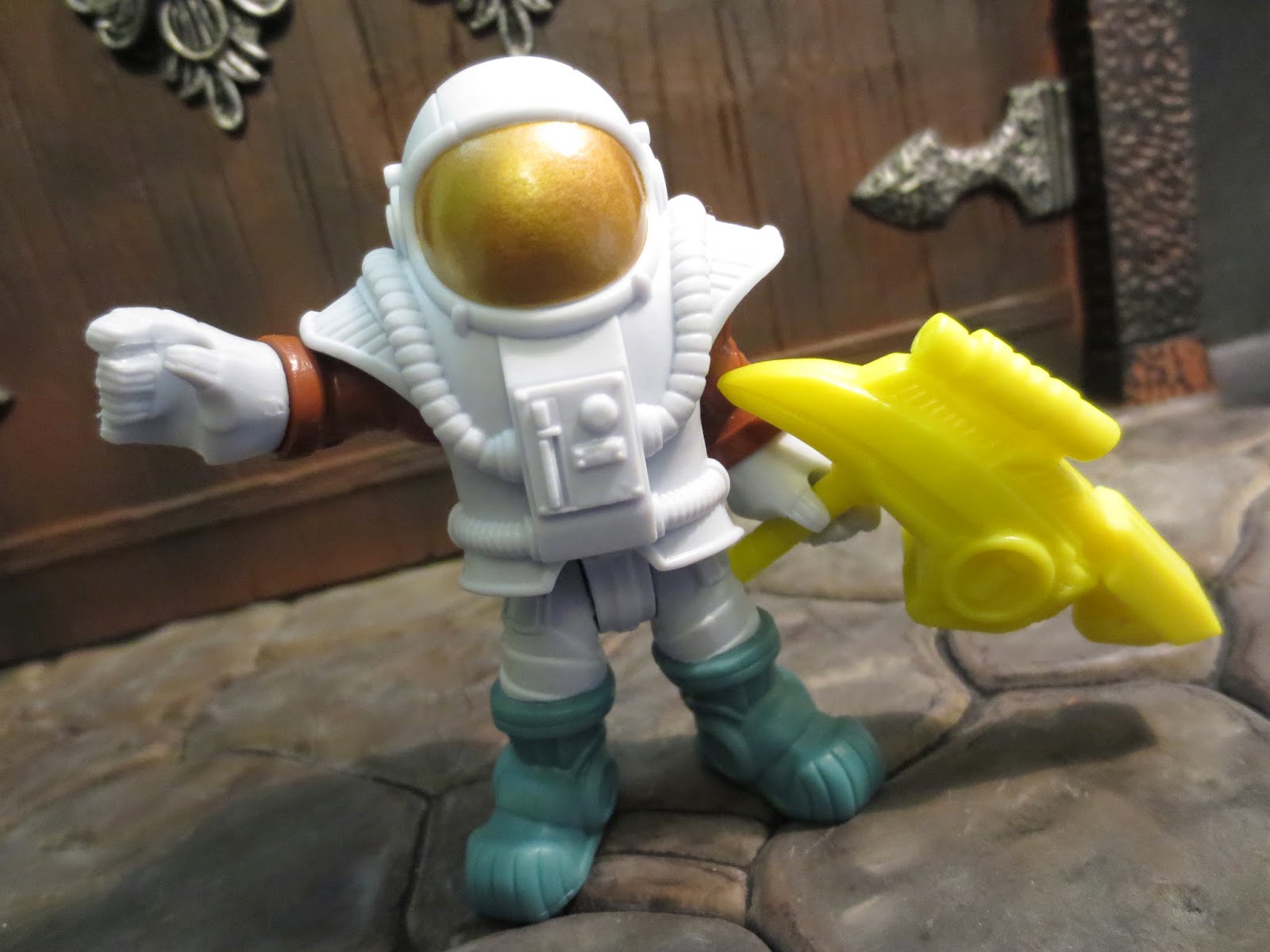 While overall I think Imaginext Series 4 might be the weakest series of the Imaginext Collectible Figures, there are a few gems that standout as some of the best figures yet in the line. The Space Gorilla is absolutely one of those figures. He's one of the coolest Imaginext figures yet and is just a fun toy overall. Whether you're a huge fan of star-hopping primates or simply want something a bit unusual to play around with on your desk the Space Gorilla won't disappoint you. I'm giving him an Epic rating. He's that good and well worth your hard earned $3 or $4 bucks. Pick this guy up, throw on some "Space Truckin," maybe watch an episode of Space Cases, grab a banana to snack on, and enjoy and out of this world action figure goodness.

From this series, I've also reviewed the Snowboarder, the Basketball Player, and the Boxer. I've reviewed a few other Imaginext figures, including: