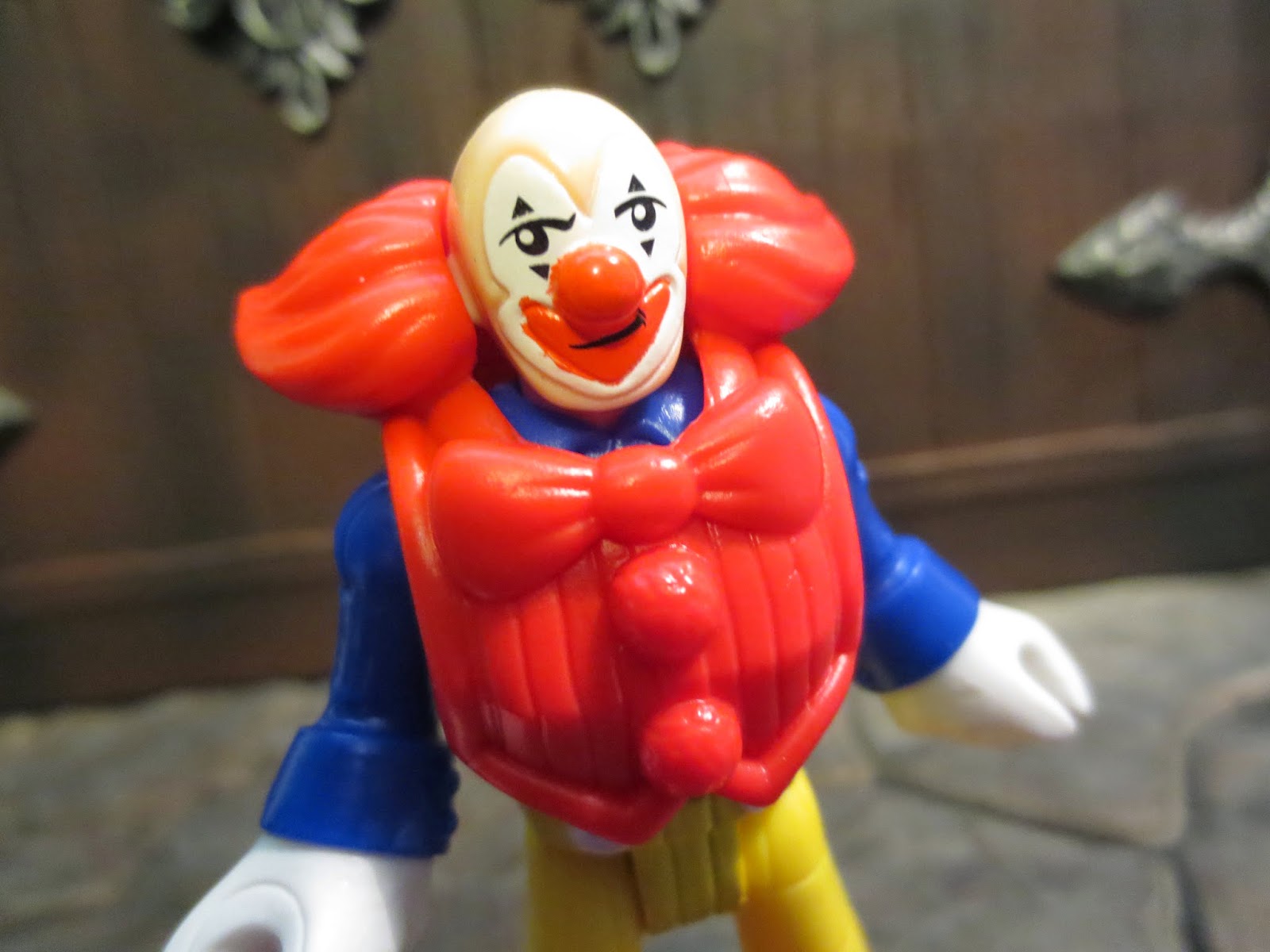 I'm not really a fan of clowns. I'm not coulrophobic; I just don't really like clowns in general. I'm fine with a creepy clown appearing in a movie (i.e. Pennywise) or with villainous clowns like the Joker. And Harley Quinn? I am 100% A-OK with her. But in general, I just find clowns.....odd. I don't know what it is. Anyways, what is one to do with a Clown in the Imaginext toy line? Here's the simple answer: Pretend that he's a Joker goon! That automatically makes this figure better, don't you think? Anyways, let's take a closer look at this Clown after the break... 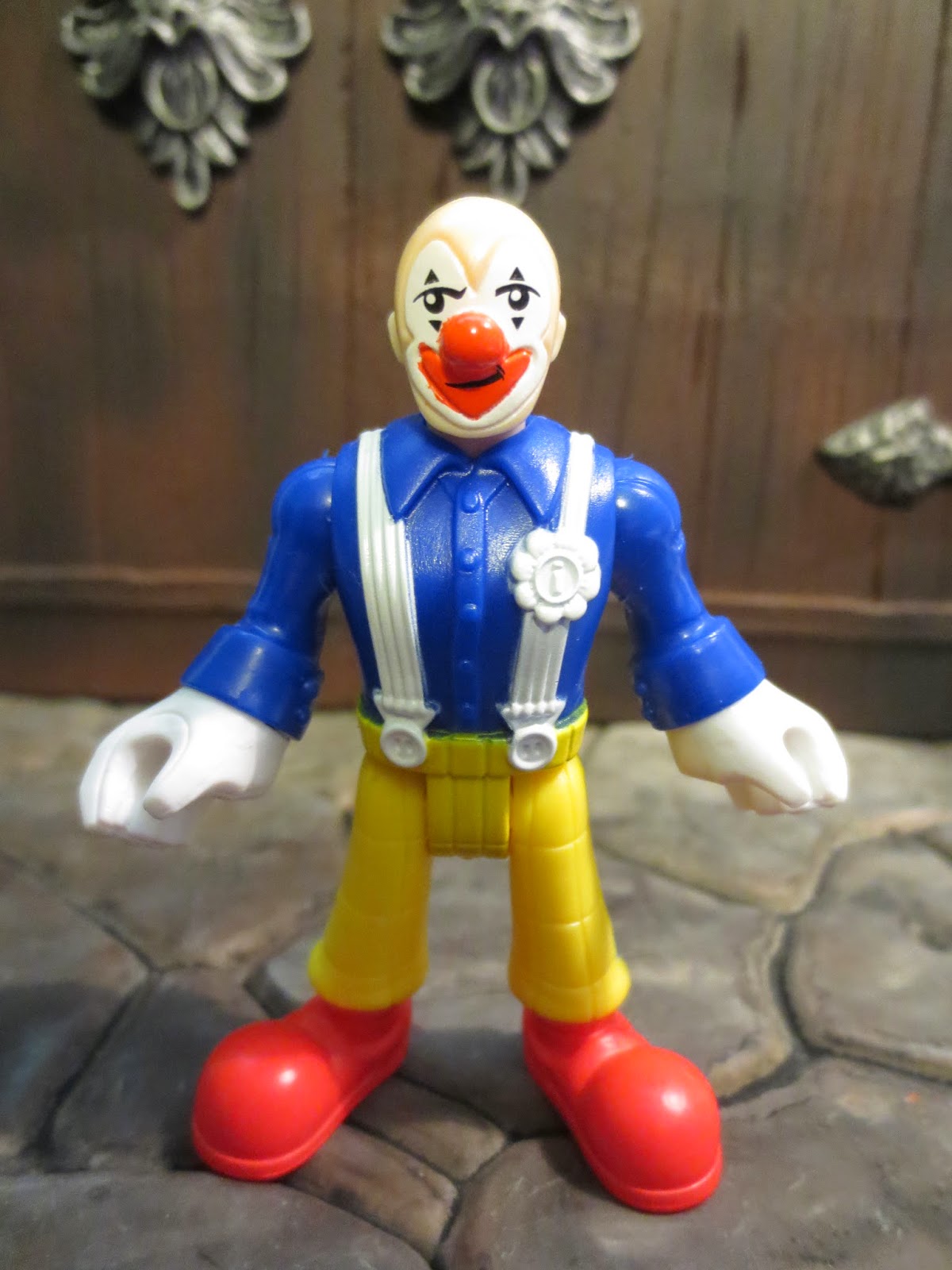 Accessories: Wig and vest piece and a balloon animal. 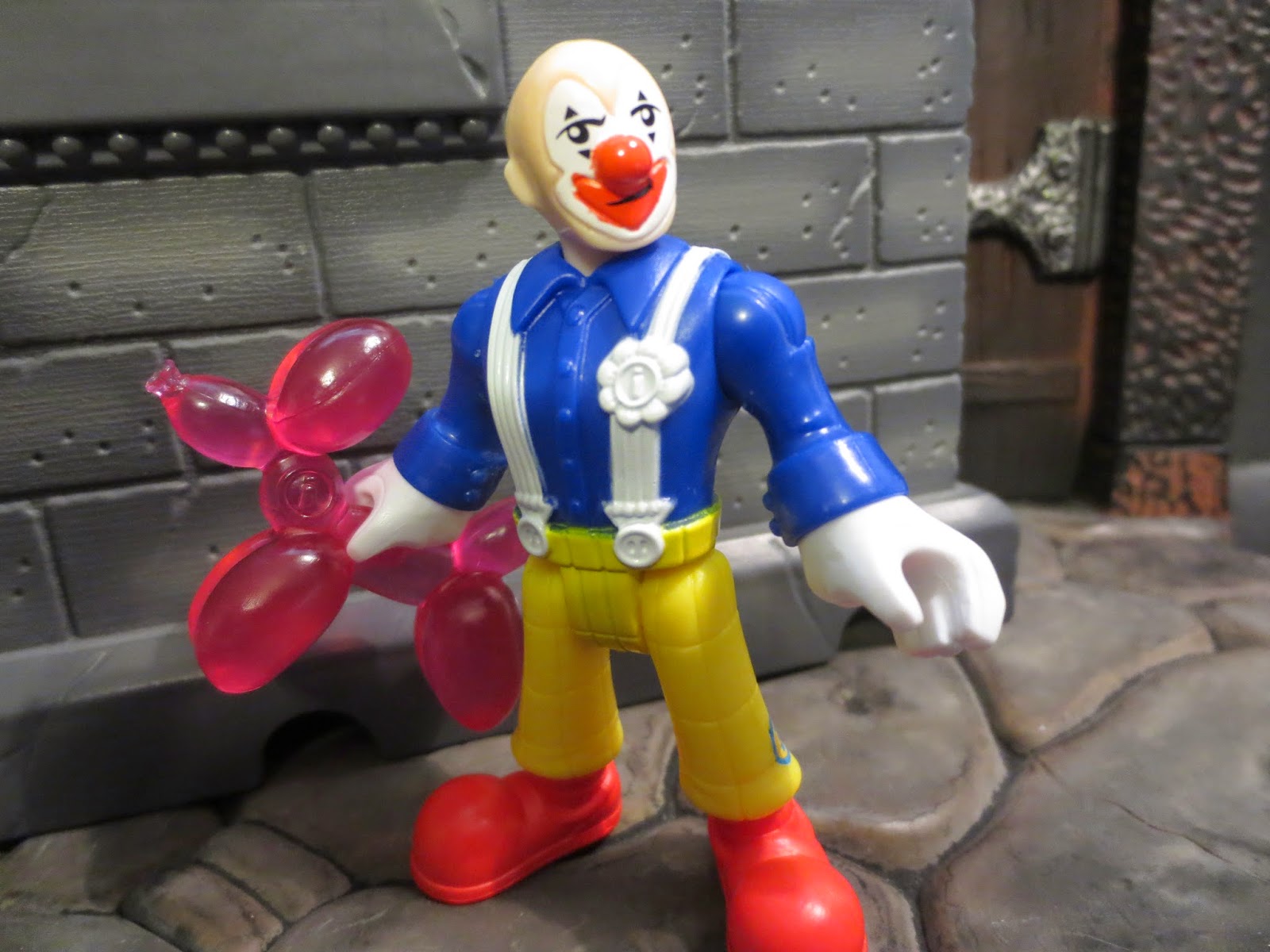 *I like how this clown is pretty...generic. He's not definitively an evil clown or anything but his sly expression and bald head definitely gives him just a hint of menace. A kid who has a pure love of clowns for some reason would like this just fine, but if you want to pretend that this guy is a deranged dude or a Joker goon, he'll work.

*The Clown has a good bit of sculpting detail on his outfit. He's wearing a basic button down shirt with suspenders (there's a flower on the suspenders that looks like the Imaginext "i" logo) and checkered pants. Due to the already exaggerated Imaginext body proportions his feet really aren't any bigger but the shoes do look appropriately clowny. The head sculpt is bald and basic but his nose is sculpted to be large and round. This is your standard clown attire right here. 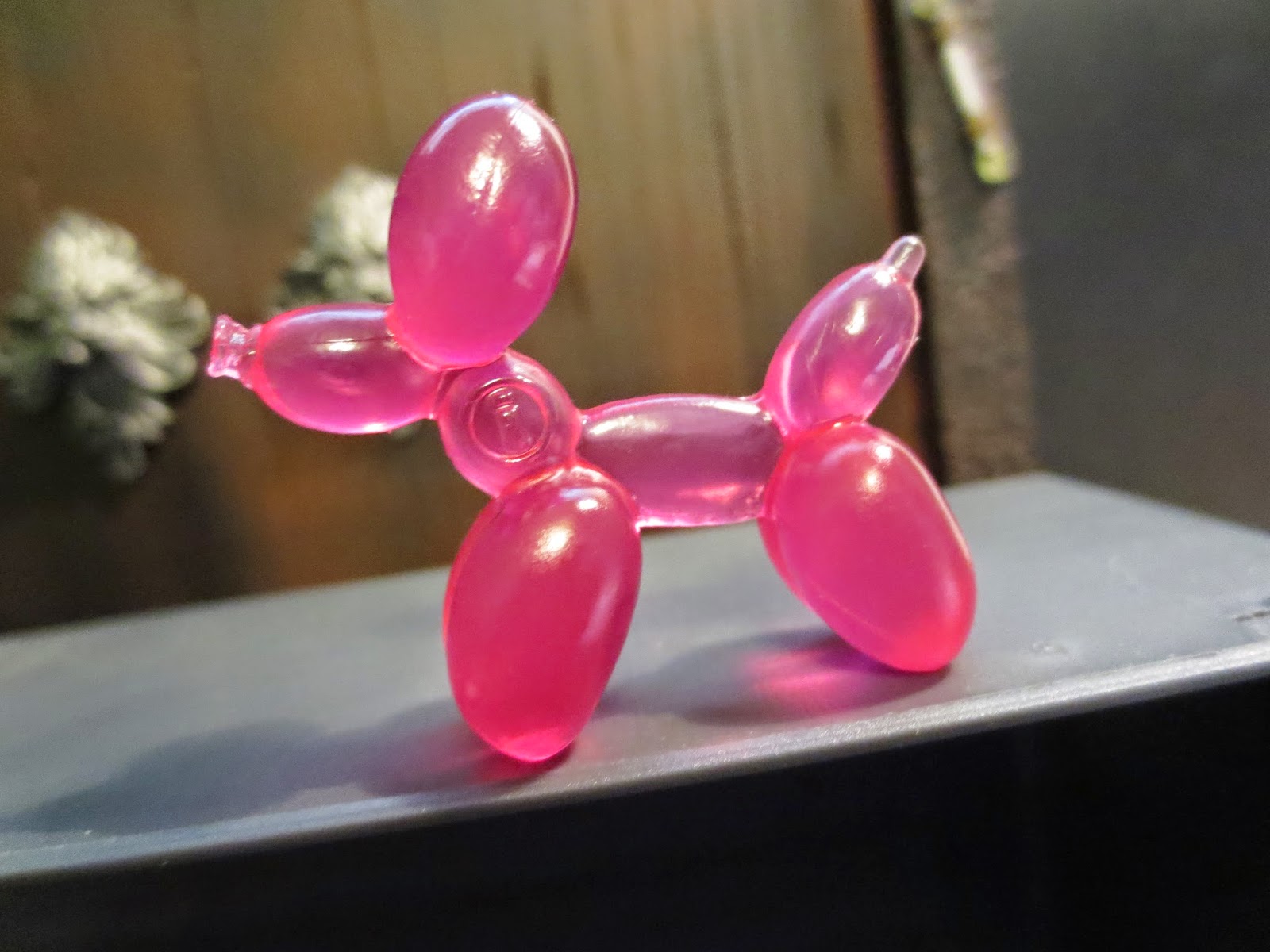 *Imaginext figures usually have nice accessories and the Clown is no exception. I love the balloon animal he comes with. It's molded in a translucent pink plastic that totally reminds me of a ghost minifigure from the Real Ghostbusters toyline. The balloon animal look to me like a dog and has appropriately rounded limbs and ears. The tip of the balloon makes the tip of the tail while the balloon knot forms the nose. The Clown can easily hold it, too! 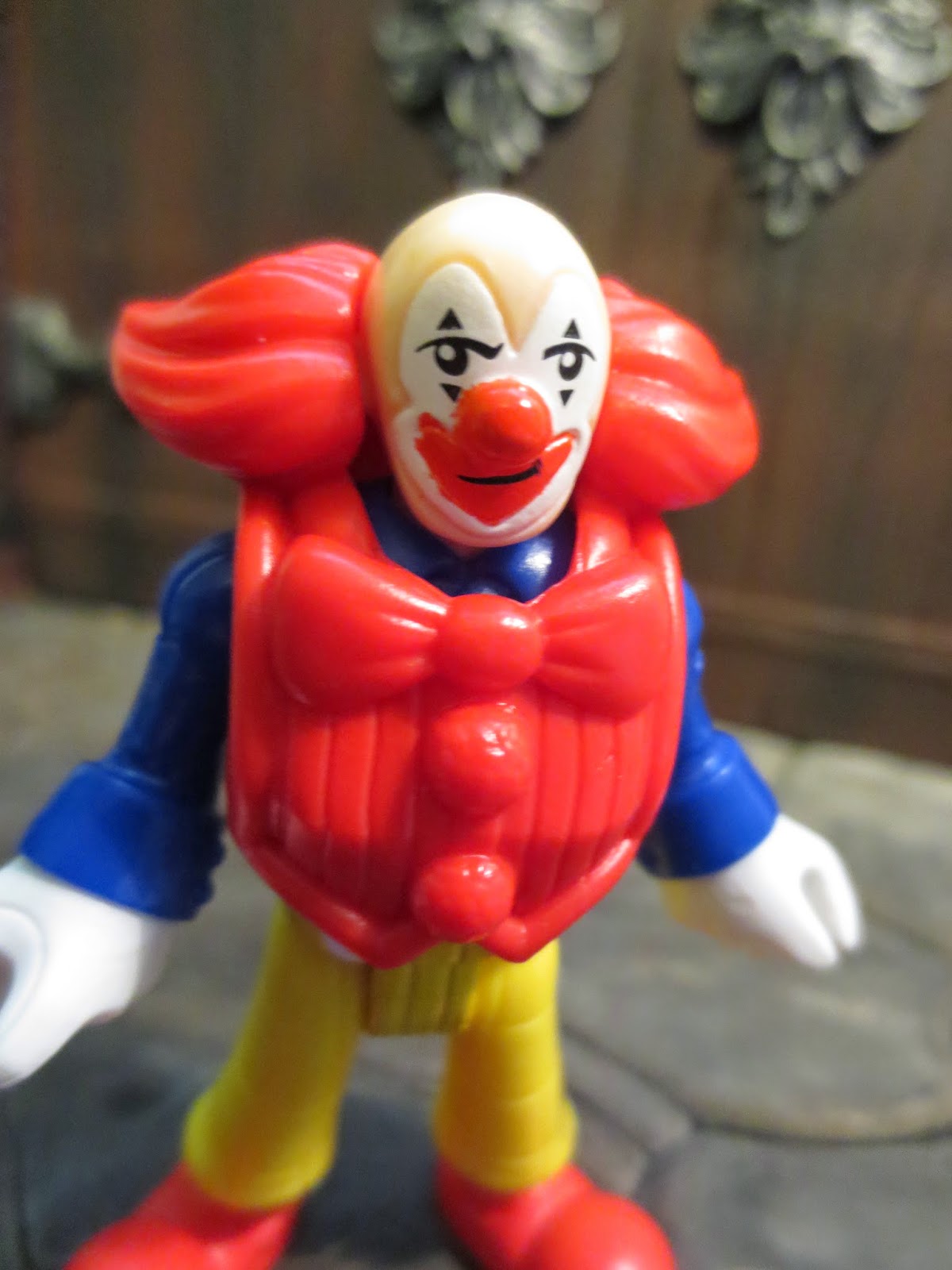 *There are a number of different colors on the clown and they look good as a whole, but there is some messy paint work on the edges. His pelvis is a different, darker yellow than his pant legs (due to the dark blue plastic underneath the yellow paint) and the lines along his suspenders are a bit wonky, too.

*One of the signature Imaginext accessories are clothing and uniform elements that fit over a figure's torso. The Clown comes with a nicely sculpted vest that is attached to the standard Bozo the Clown styled hairpiece. It's a nice, durable piece but it's disappointing that it doesn't have any painted elements. This would have looked much better if just the hair was red and the vest and bow-tie were white. Not bad, just disappointing and a bit unusual when most other "outfit" pieces in the line have painted details. 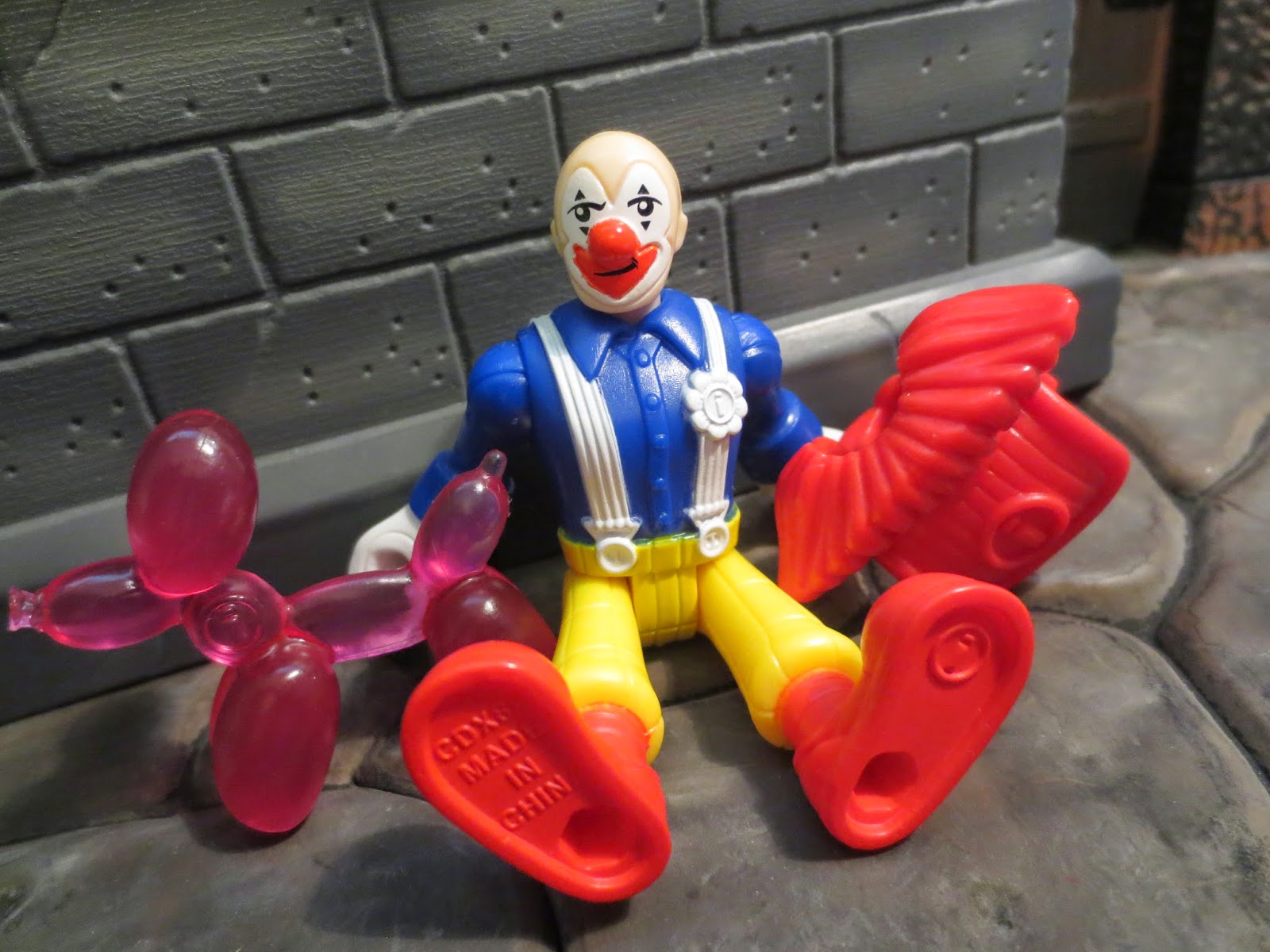 The Clown is a bit more interesting than I expected him to be. He's nicely sculpted and does seem like he could go either way between being a legitimate happy clown or a creepy killer clown. Anyways, whether you just need more clowns for your Imaginext shelf or more goons for the Joker, this guy is a decent choice. Assuming you like clowns, that is. He's still a pretty average Imaginext figure although I do love the balloon animal. Overall, I'm giving him a Good rating. He might have rated higher, but some of the paintwork is sloppy and brings things down a bit.

From this series, I've also reviewed the Snowboarder, the Basketball Player, the Space Gorilla, and the Boxer. I've reviewed a few other Imaginext figures, including:

Also, if you're into clowns, check out these other reviews: