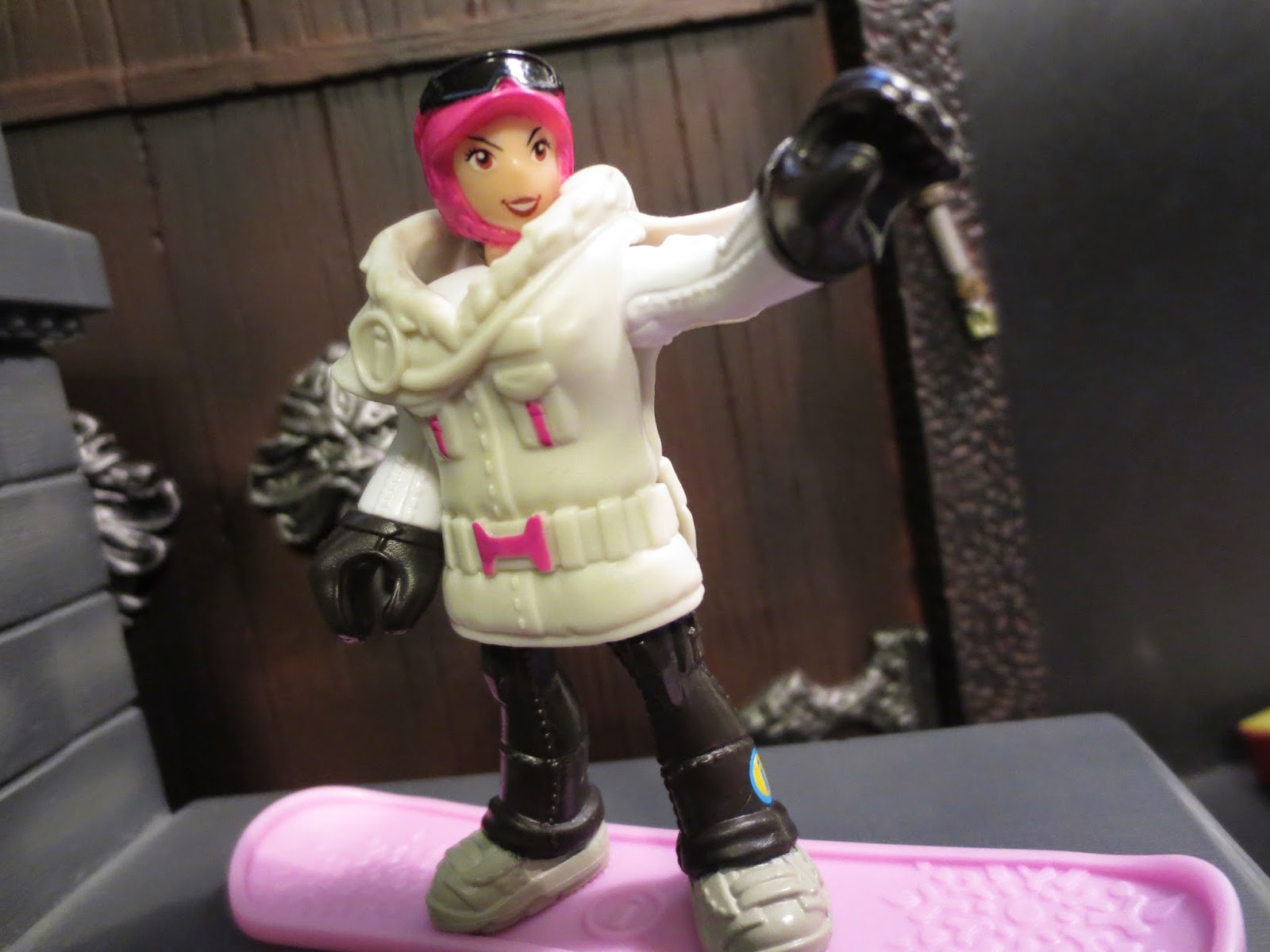 As I mentioned in my review of the Imaginext Boxer, sports themed figures really aren't my thing. Today I'm looking at the Snowboarder from the Imaginext Collectible Figures series 4 but I don't have too much familiarity with the sport: The only two things snowboarding related that I've ever been into were 1080 Snowboarding on the Nintendo 64 and the second version of the Snow Serpent from G.I. Joe that came with a purple snowboard. That's it. Still, this is an interesting figure in that I'm a big fan of toys clothed in cold weather gear and this is one of the first two female Imaginext figures to appear in the blind bagged series. The DC Superfriends series has had figures of characters like Wonder Woman, Harley Quinn, Poison Ivy, and Catwoman, but the main line hasn't seen many (or any) females yet as far as I know. Let's check out the Snowboarder today, shall we? 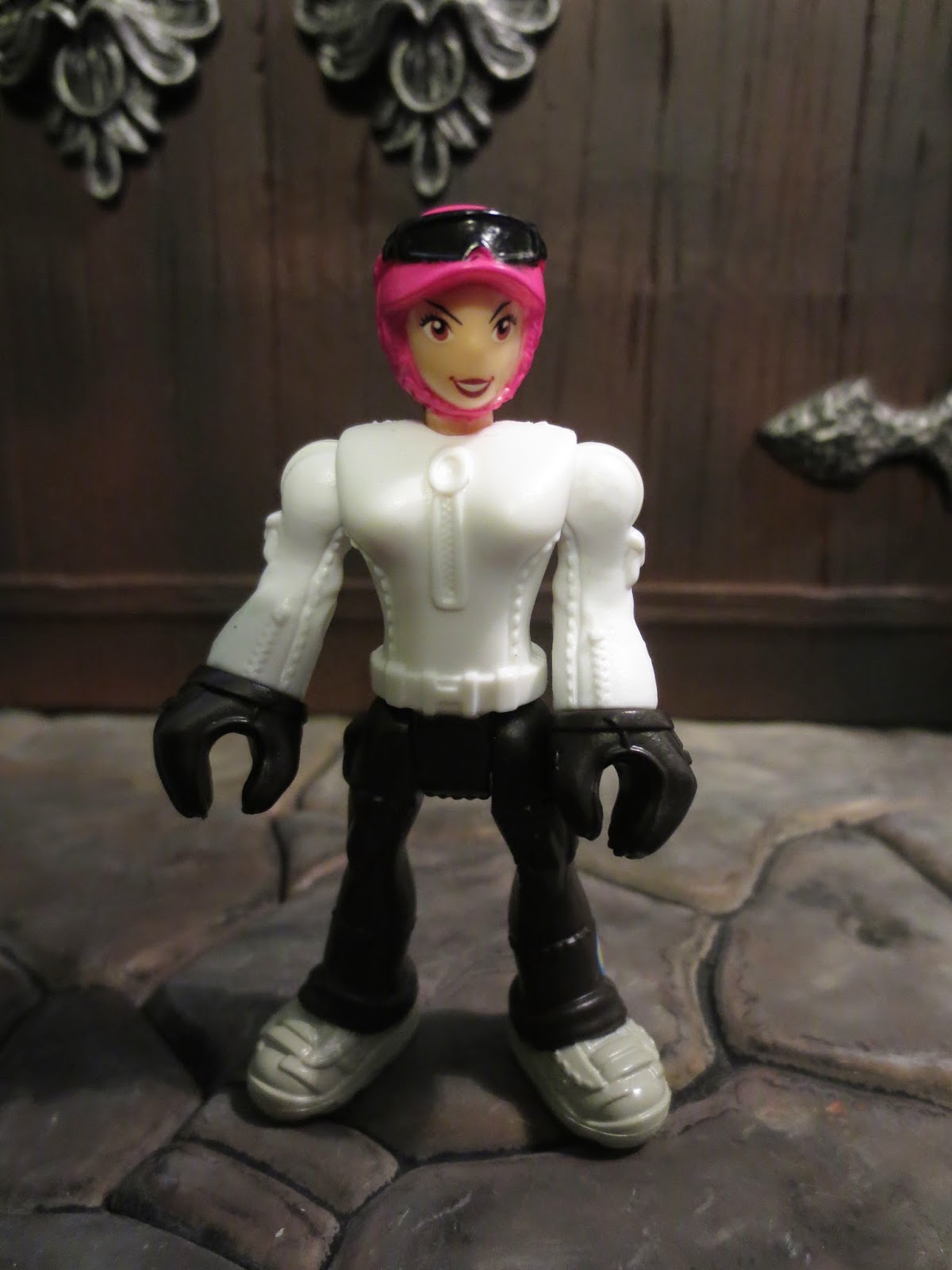 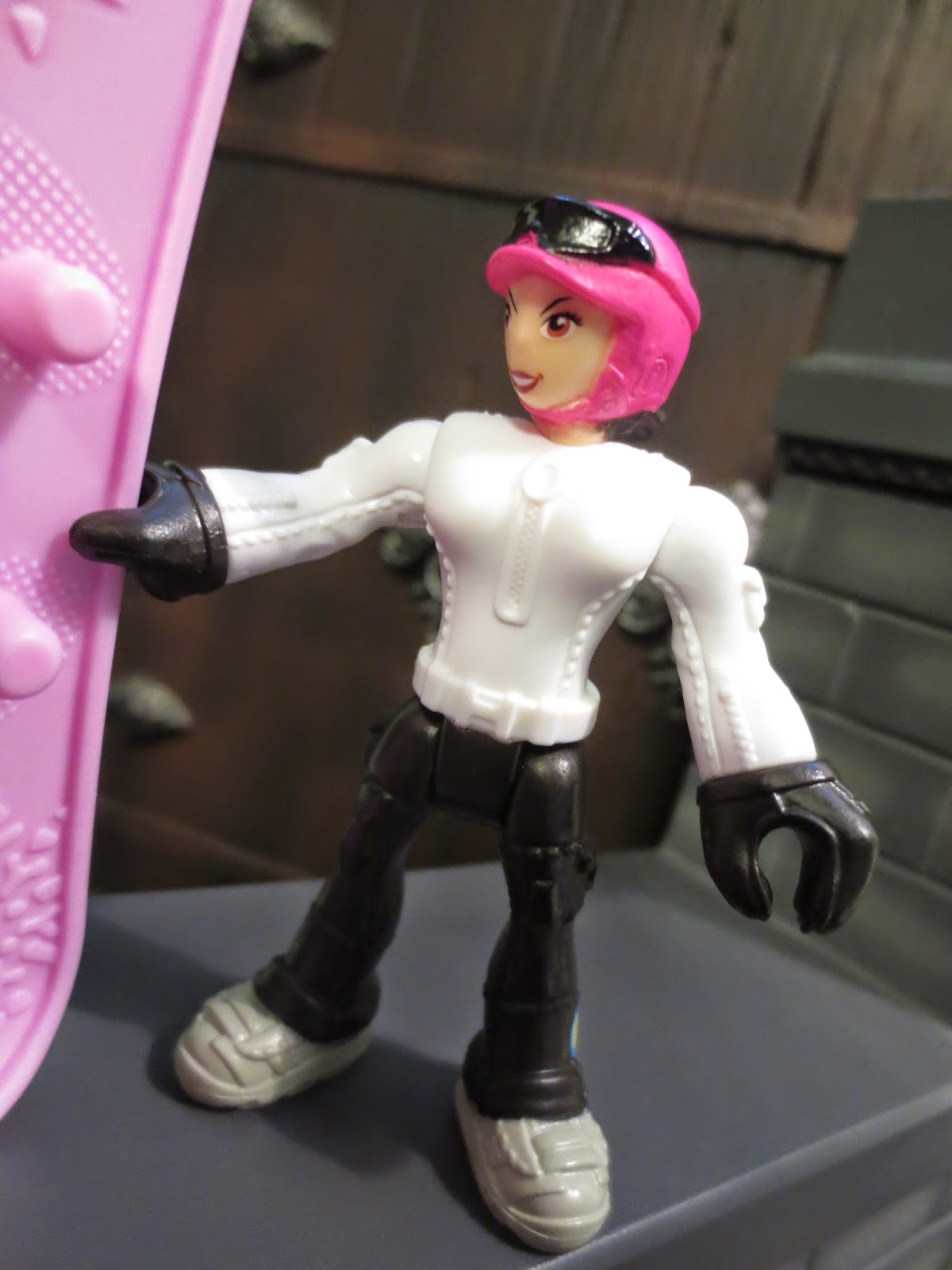 The Snowboarder is about the same height as the male figures in the line and is articulated in the exact same way. She also has the same slightly oversized hands and feet that kind of defines the Imaginext style. If you're looking for her in a store you can find the blind bag code (she is 71) or feel for the snowboard (it's rounded on both sides, unlike the evil alien's board). 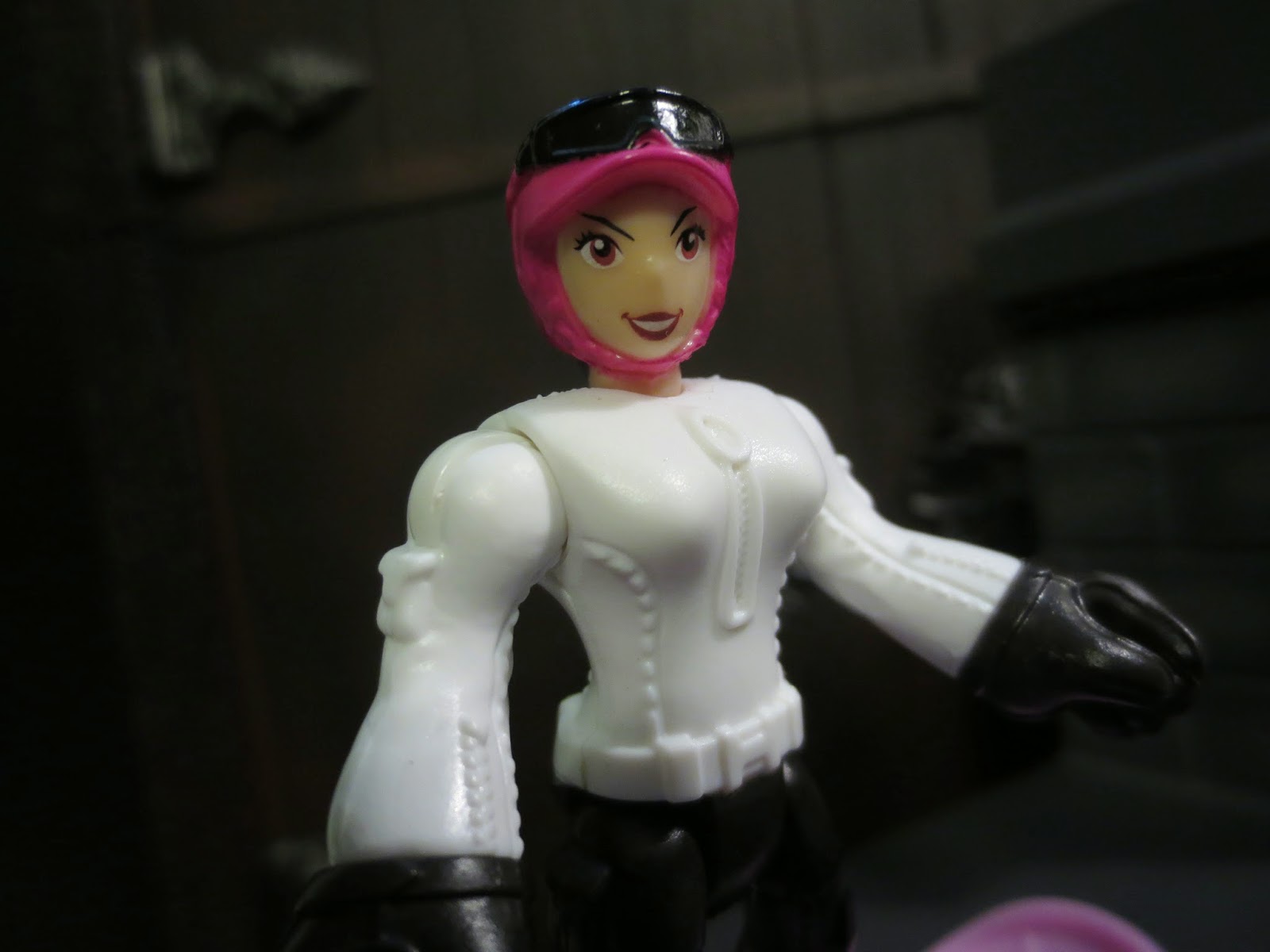 Her sculpt is incredible detailed and she has a great white, black, and pink color scheme. Her outfit is covered with cargo pockets, knee and elbow pads, and lots of stitching. Her helmet looks pretty cool and features her ponytail hanging out the back but I think it definitely makes her head look far too small. It seems like her facial features had to be painted too close together to make it fit. It's kind of odd looking, to be honest. Maybe the helmet should have been a separate piece attached to the removable vest? I'm digging her snowboarding boots, though, They're pretty wicked.

To bulk her up and keep her warm the Snowboarder comes with a removable vest. It's made from a soft plastic and fits right over her head. There's a hood on there but it's sculpted permanently down. The Imaginext "i" serves as a clasp on the front of the vest and there are a few pink paint apps to add some color to the outfit. Interestingly, there is a bit of a sleeve sculpted out at an angle on the left sleeve. This actually serves the purpose of allowing her left arm to be extended as if she is balancing on the snowboard. It's an interesting feature but I think eliminating the sleeves altogether might have been a better idea. 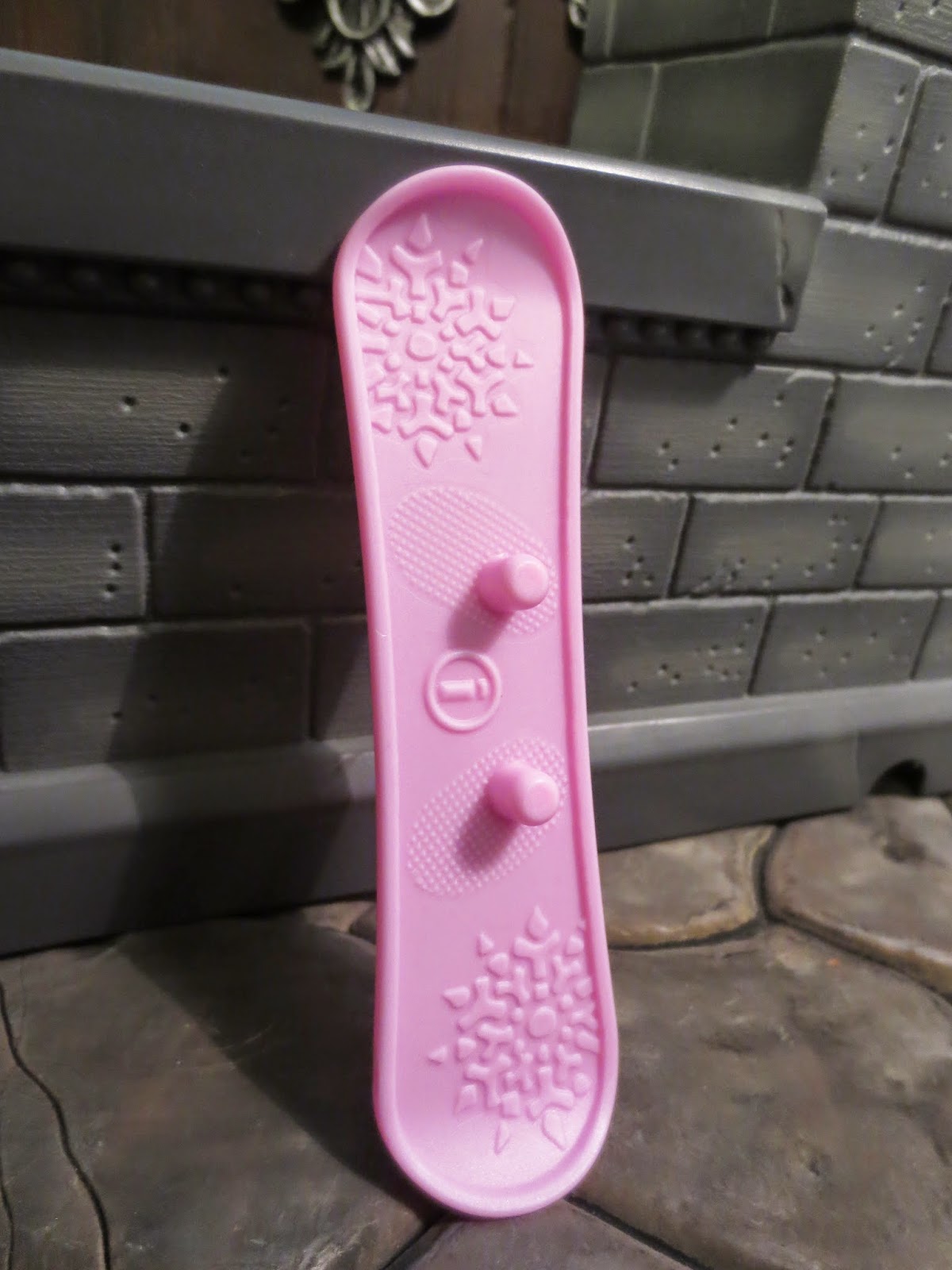 The snowboard is a simple pink plastic snowboard with pegs for the Snowboarder's feet. There are some sculpted snowflake designs on the board as well as some grip texturing where her feet go. It's a pretty cool accessory and the figure stays tightly attached. 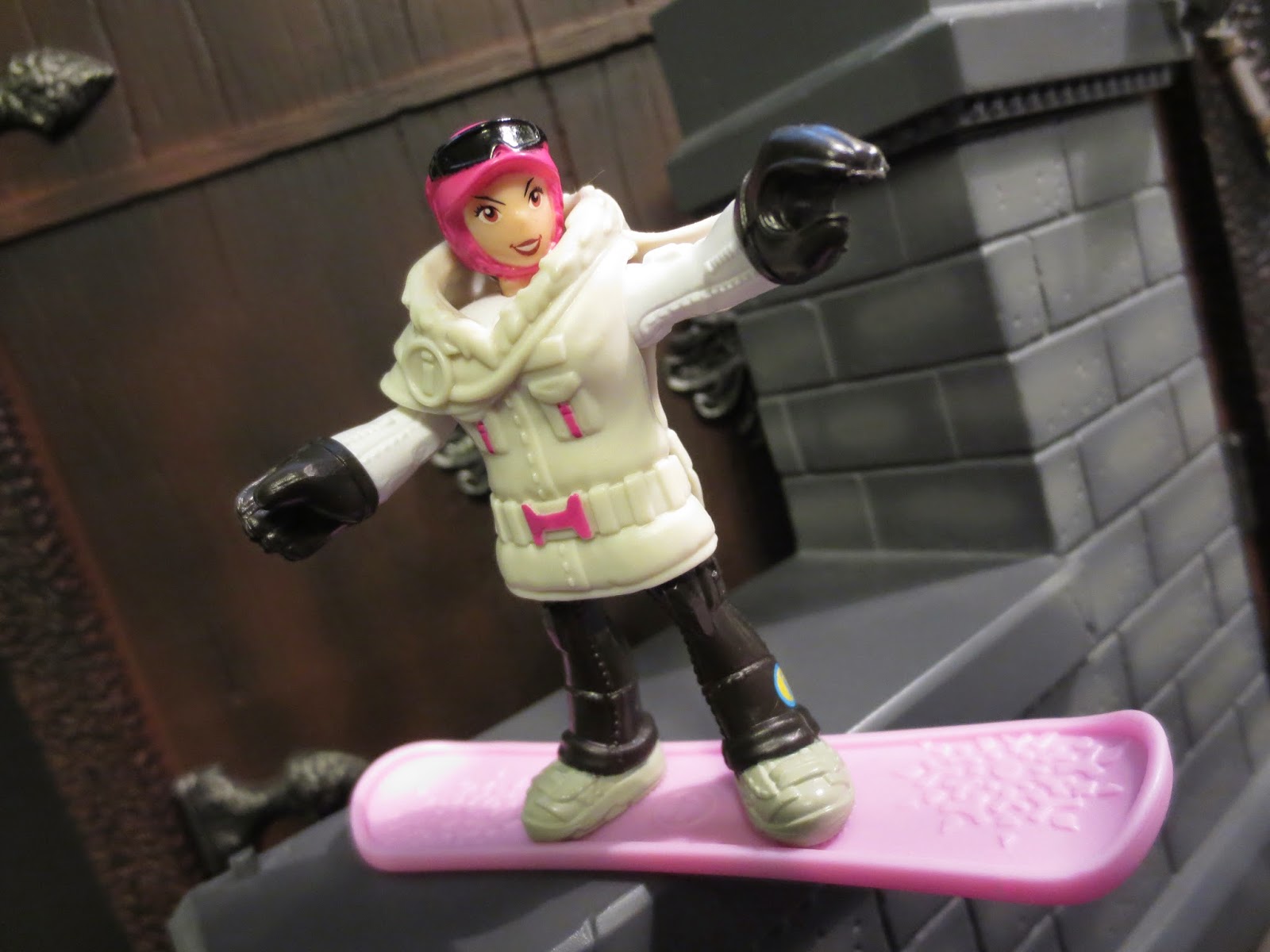 The Snowboarder is an average Imaginext figure. The quality is exceptional and the accessories are fun but there's nothing that really jumps out at me. I like the color scheme, though, but the paintwork on the face just seems...off. I'm not sure what it is but it makes the Snowboarder look kind of  crazy. As it stands, I'm giving her a Good and a 1/2 rating. She is greatly improved when you give her a weapon, however. I put the Space Gorilla's weapon in her outstretched left hand and immediately liked the figure quite a bit more. The more I think of her as some kind of special agent rather than just a snowboarder, the more I like her.

From this series, I've also reviewed the Boxer. I've reviewed a few other Imaginext figures, including: