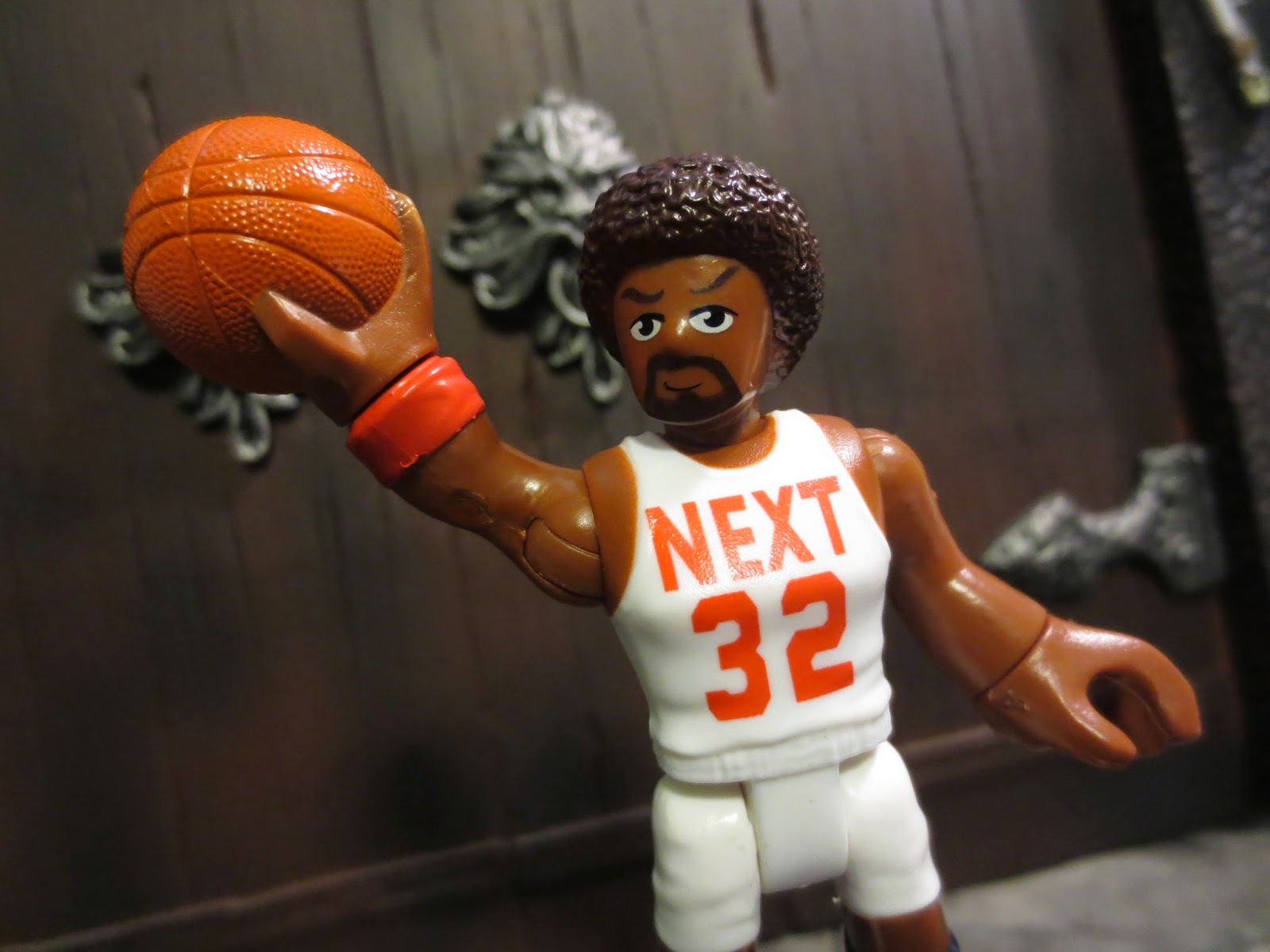 I guess I'm getting all of the sports figures from Imaginext Collectible Figures Series 4 out of the way because I've reviewed the Boxer, the Snowboarder, and now the Basketball Player. I have to say that this guy is definitely the least exciting figure to me in the entire set simply because I'm not into sports at all. Honestly, the only Imaginext figure I can think of that's more boring than this guy is the Soccer Player from series 1. This is a nice looking figure, no doubt, but basketball just isn't my cup of tea. Anyways, this will be a short one today, so read on and enjoy. 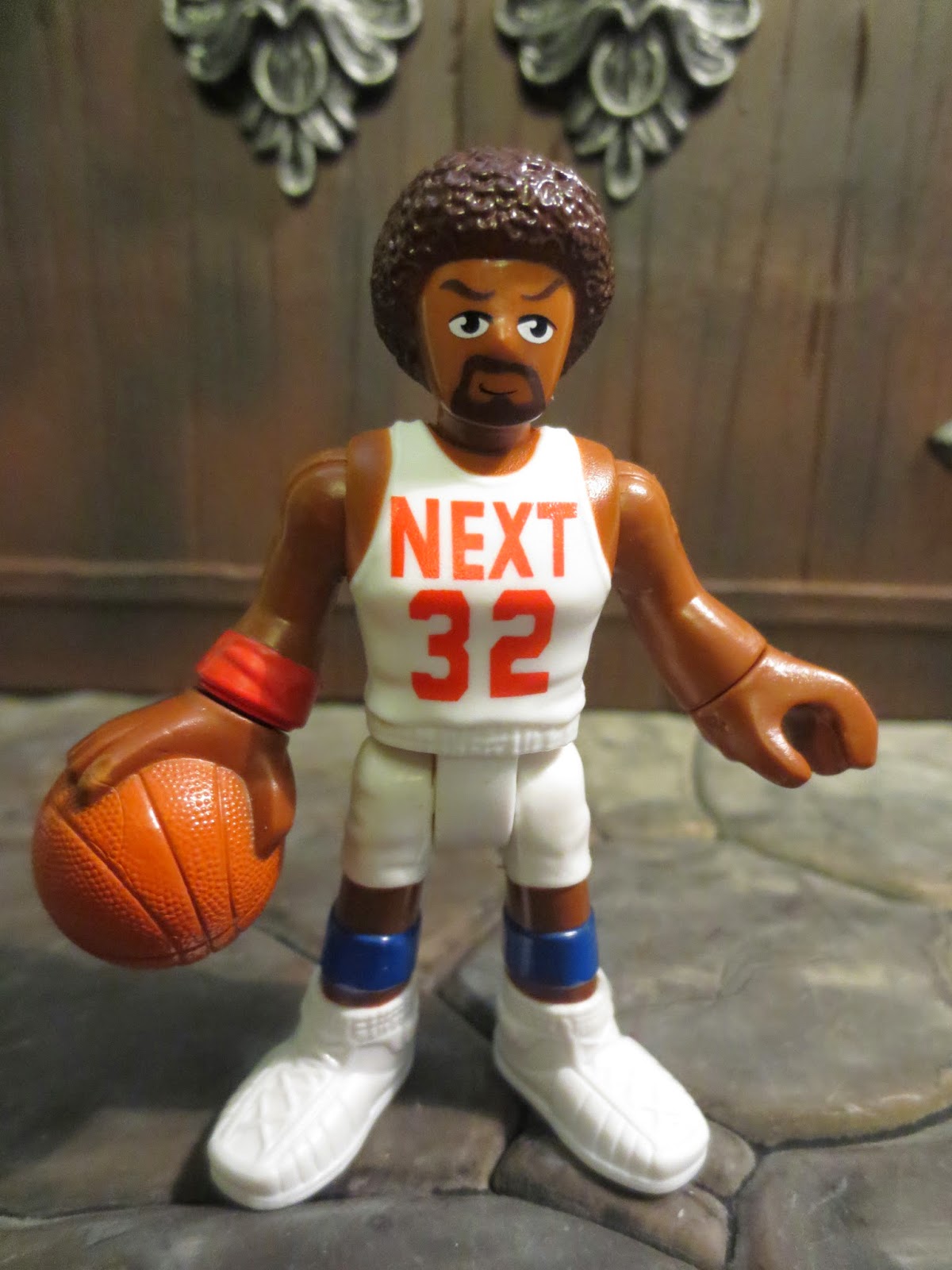 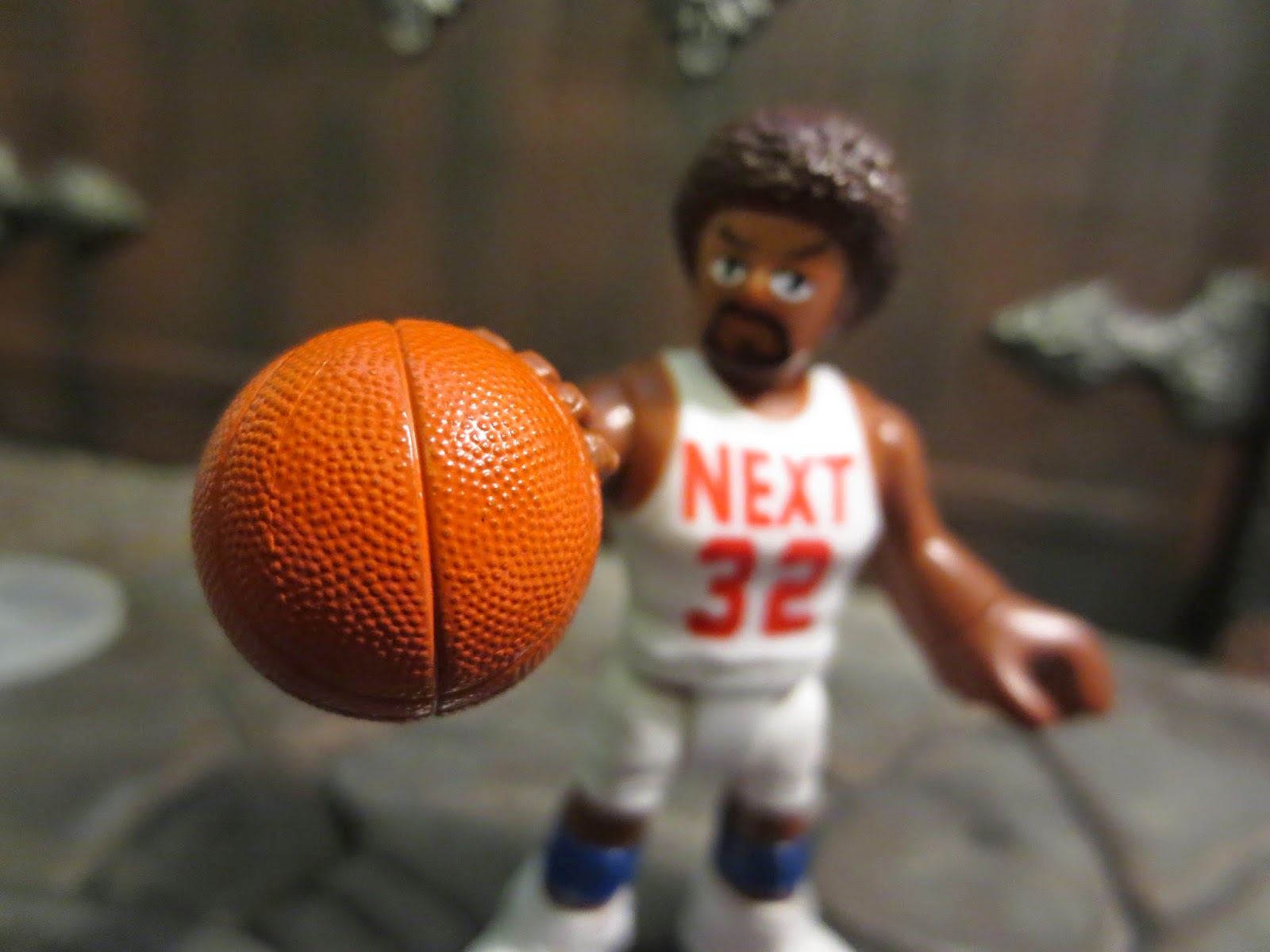 There's nothing too unique about this figure compared to other Imaginext figures except for the fact that the basketball is molded as part of the Basketball Player's hand. If you're looking for this guy in stores you can look for the stamped code number "81" or you can try to feel for his uniquely shaped flight stand. 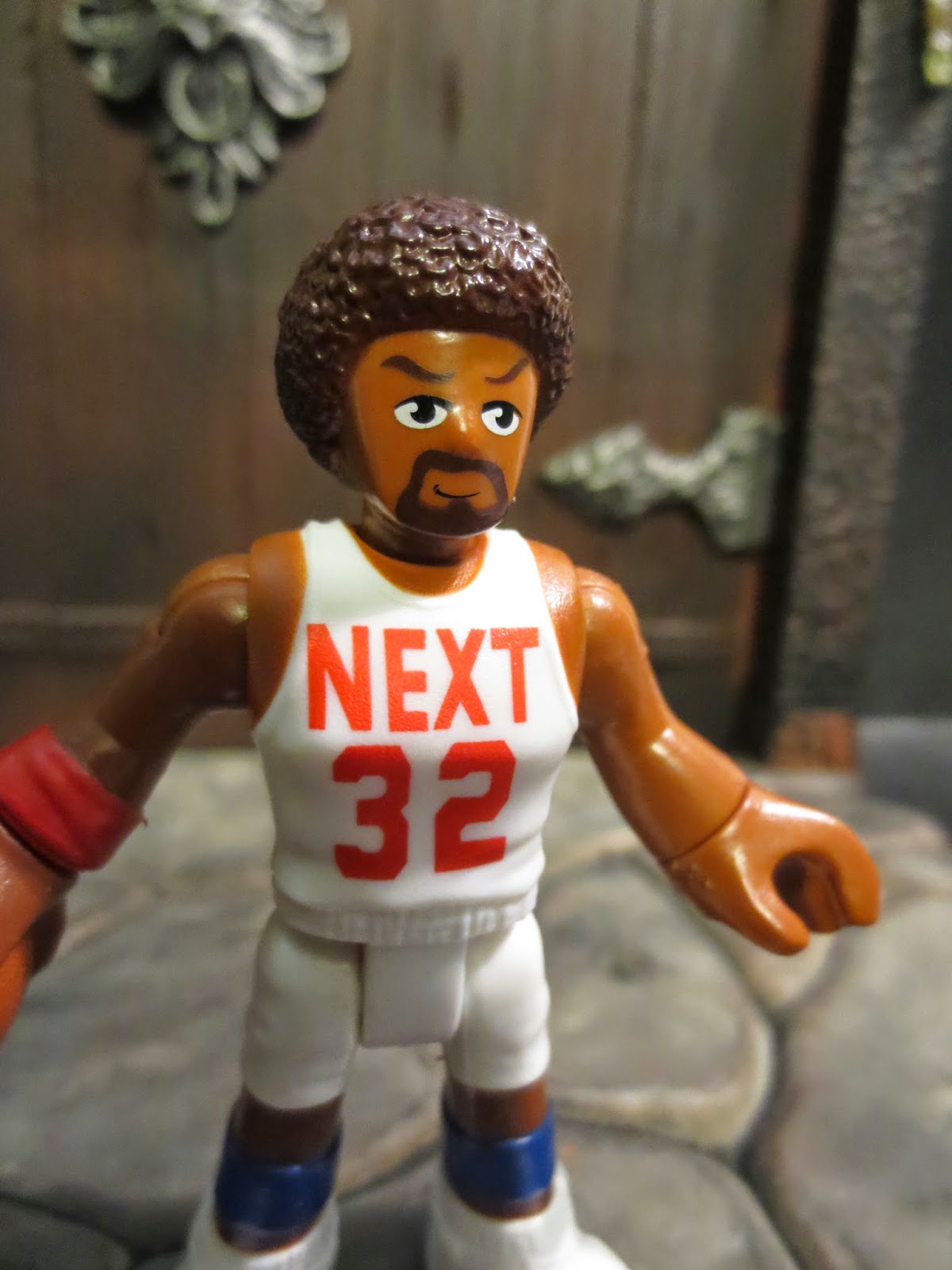 Initially I saw the number 32 on his jersey and thought Fisher-Price had playfully reversed Michael Jordan's iconic #23 (pretty much the only sports number I know) but I've seen a few other folks point out that not only did Julius "Dr. J" Erving wear #32 at one point, he also wore it while playing for the Nets. In an outfit that looks kind of like this toy. Oh, and the figure kind of looks like him, too. Yup, this is a tribute figure to Dr. J all right.

While I don't find the basketball outfit to be that exciting, I do like the head sculpt and the painted on facial features. His afro has some nice detail and the Basketball Player has a great determined expression on his face. The basketball in his hand is pretty impressive, too: I love the texture on the ball itself. 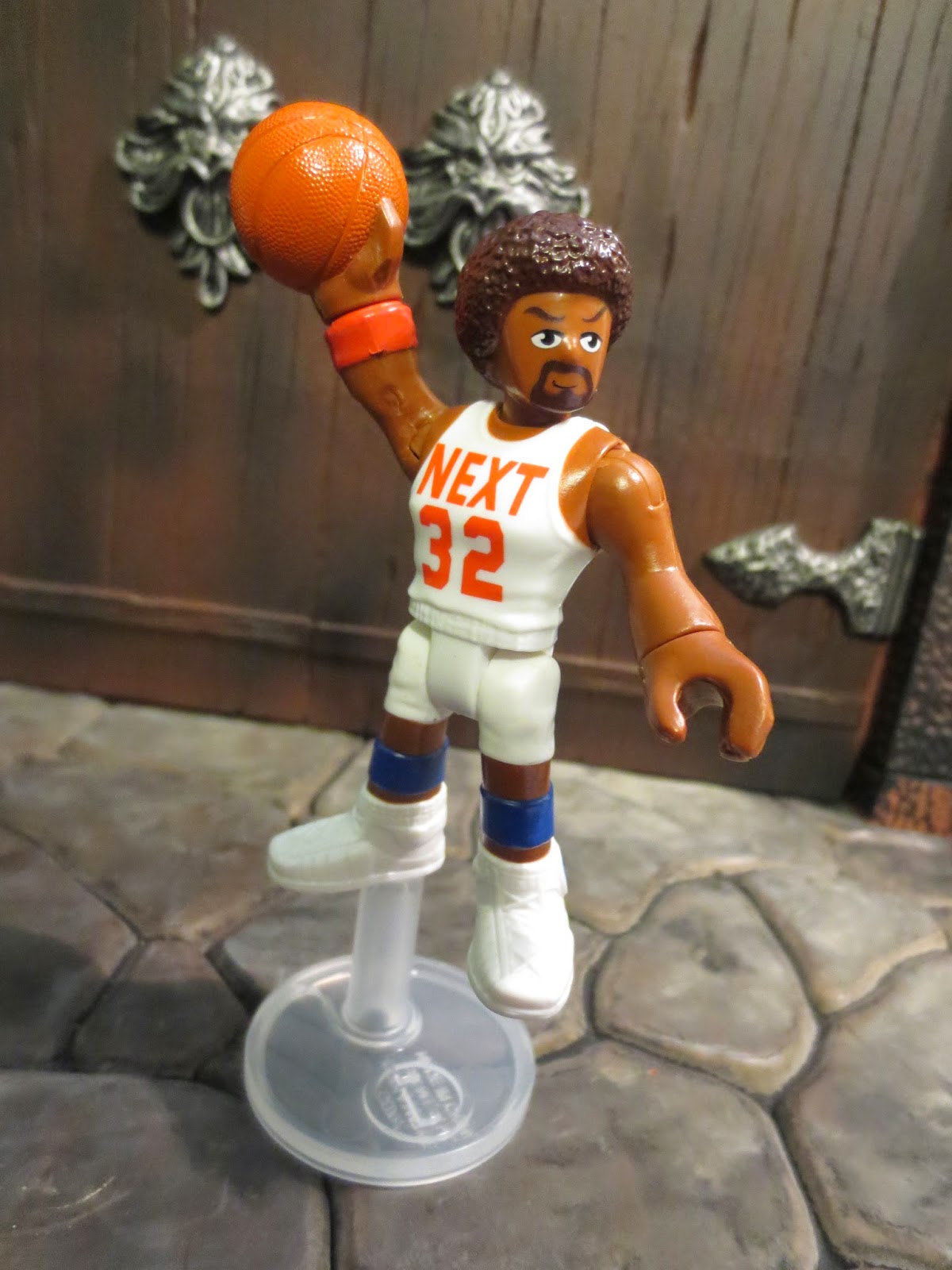 The Basketball Player only comes with one accessory: A clear plastic stand that allow him to look like he's jumping in the air. It has a thick peg on the end that fits nicely into his foot and he balances pretty well on it. This would be an interesting accessory to pick up for other Imaginext figures, particularly Superman and maybe even Green Lantern. Maybe we'll see it repurposed in the future. Unlike with Lego and Playmobil pieces, you don't see that many Imaginext pieces reused. 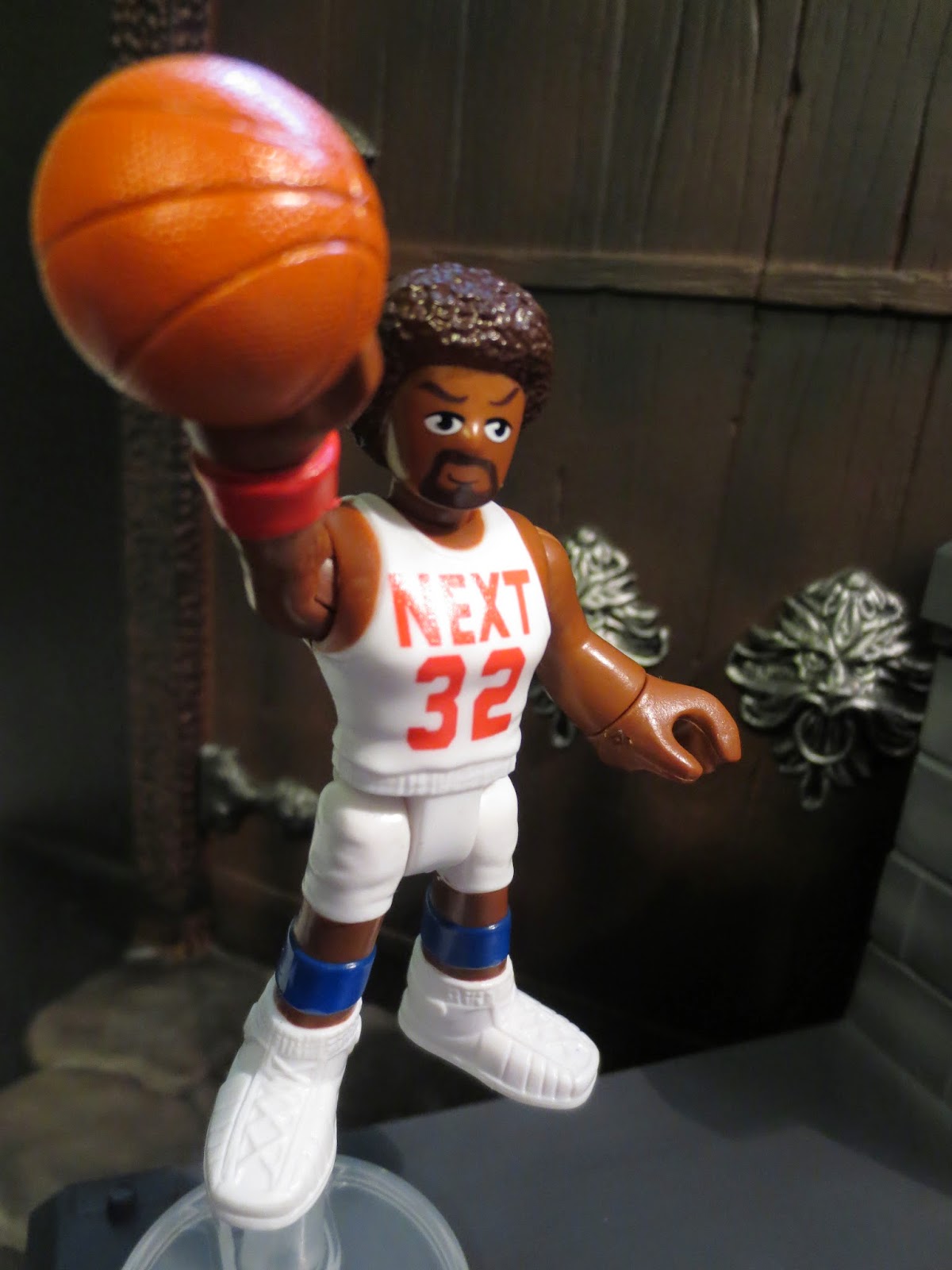 Since sports have never been my thing, I'm typically pretty uninterested in sports based action figures. Seriously, Starting Lineup, that old Shaq line from Kenner, and McFarlane's flood of sports figures bore me to know end. This guy, as cool as he is, just bores me too. Don't get me wrong: I know there is some nice detail on the ball and on his fro, but I just don't care that much. The flight stand is cool, though. This guy is more fun than I expected, but pretty average overall. I'm giving him a Good though I imagine others will appreciate him much, much more.


From this series, I've also reviewed the Snowboarder and the Boxer. I've reviewed a few other Imaginext figures, including: