Action Figure Review: Star-Lord and Gamora from Guardians of the Galaxy by Hasbro 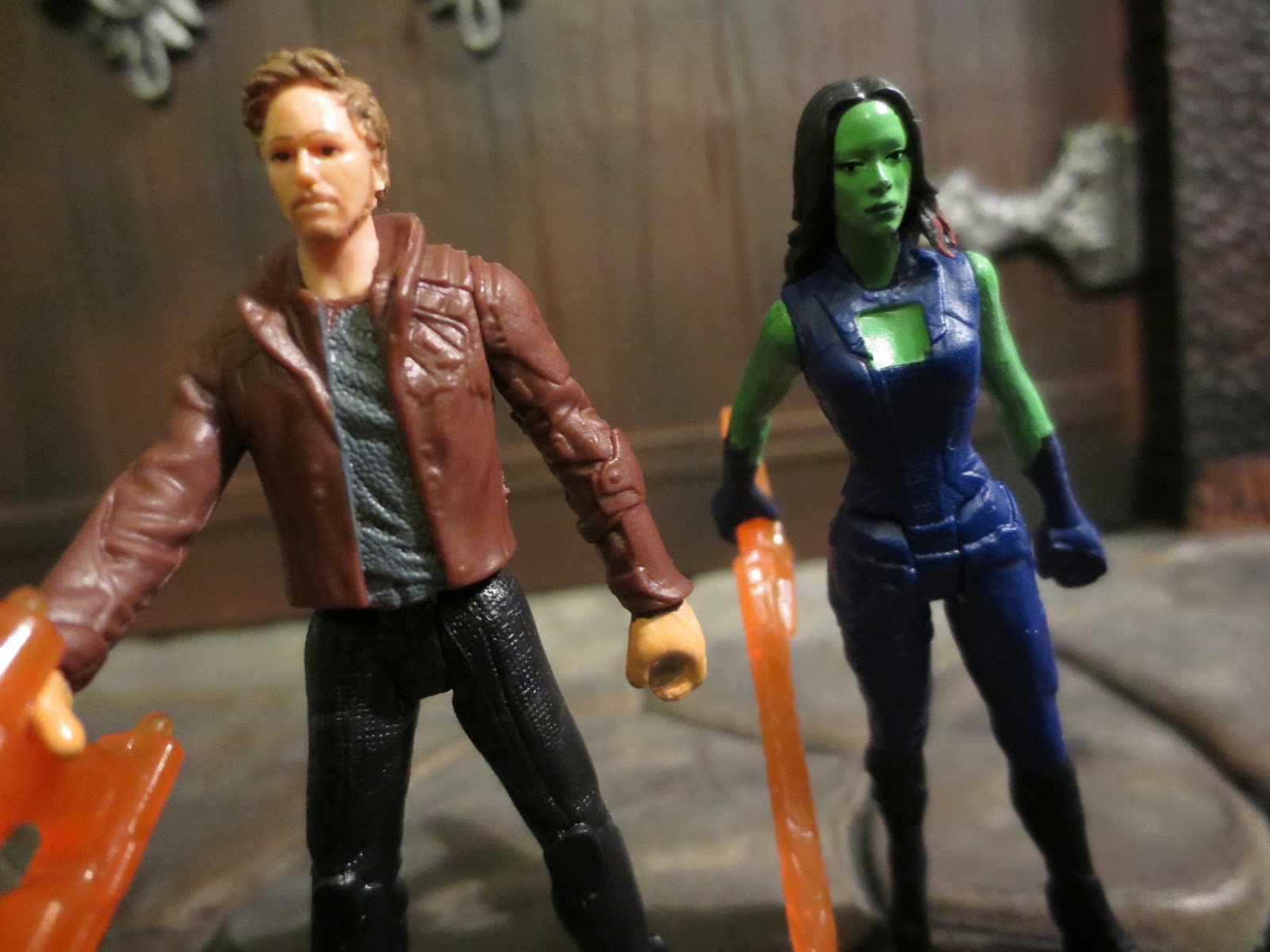 Before I get into the review, I want to think Action Figure Man over at Action Figure Imagery for sending me these figures. I won their February 2015 contest and received this set and Split Cycle Superman from Man of Steel. I appreciate Action Figure Man's generosity in running these contests pretty frequently and giving out prizes! Thank you so much!

Guardians of the Galaxy was without a doubt my favorite movie released last year. It's also my favorite Marvel film overall. Since I bought the Awesome Mix soundtrack last August I'm not sure it's left my car. I've cosplayed as Star-Lord as the 2014 Charlotte Heroes Convention and as part of a group Halloween costume. I'm a fan. That being said, I found Hasbro Guardians of the Galaxy action figure offerings to be...disappointing. Guardians simply lacked many of the problems that so many other superhero movie based toylines face: It had a full cast of heroes (versus one hero like Man of Steel or any of the Spiderman films), it had multiple non-human villains, vehicles were an integral part of the plot (no need to make up an ATV for the Hulk to ride), and kids didn't already have these characters in action figure form. This should have been a line that perfectly married a superhero line with the collectability and depth of  something like Star Wars. So what happened? Hasbro, that's what. Let's be honest: Hasbro has pretty much killed G.I. Joe, 1/18th scale Star Wars figures, and the only decent Marvel stuff they put out are Marvel Legends and the Marvel Super Hero mashers. For Guardians of the Galaxy Hasbro tried something different by offering packs of 2.5 inch tall articulated figures. That's not a problem, necessarily, as I have fond memories of smaller lines like Eagle Force, M.A.S.K., and Air Raiders. Unfortunately, these won't blend into any established Marvel collection. Ready for a closer look at these? Then join me after the break... 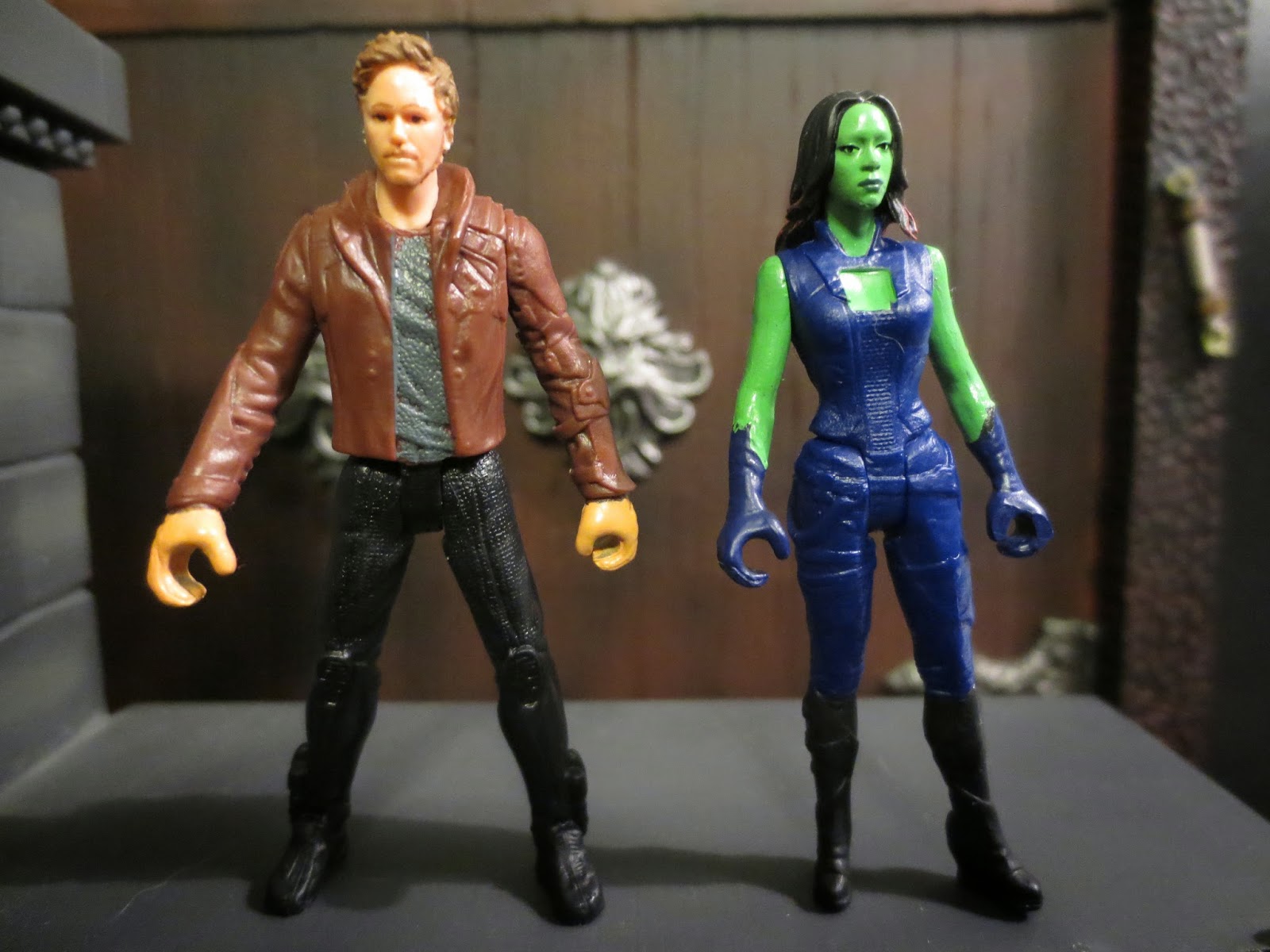 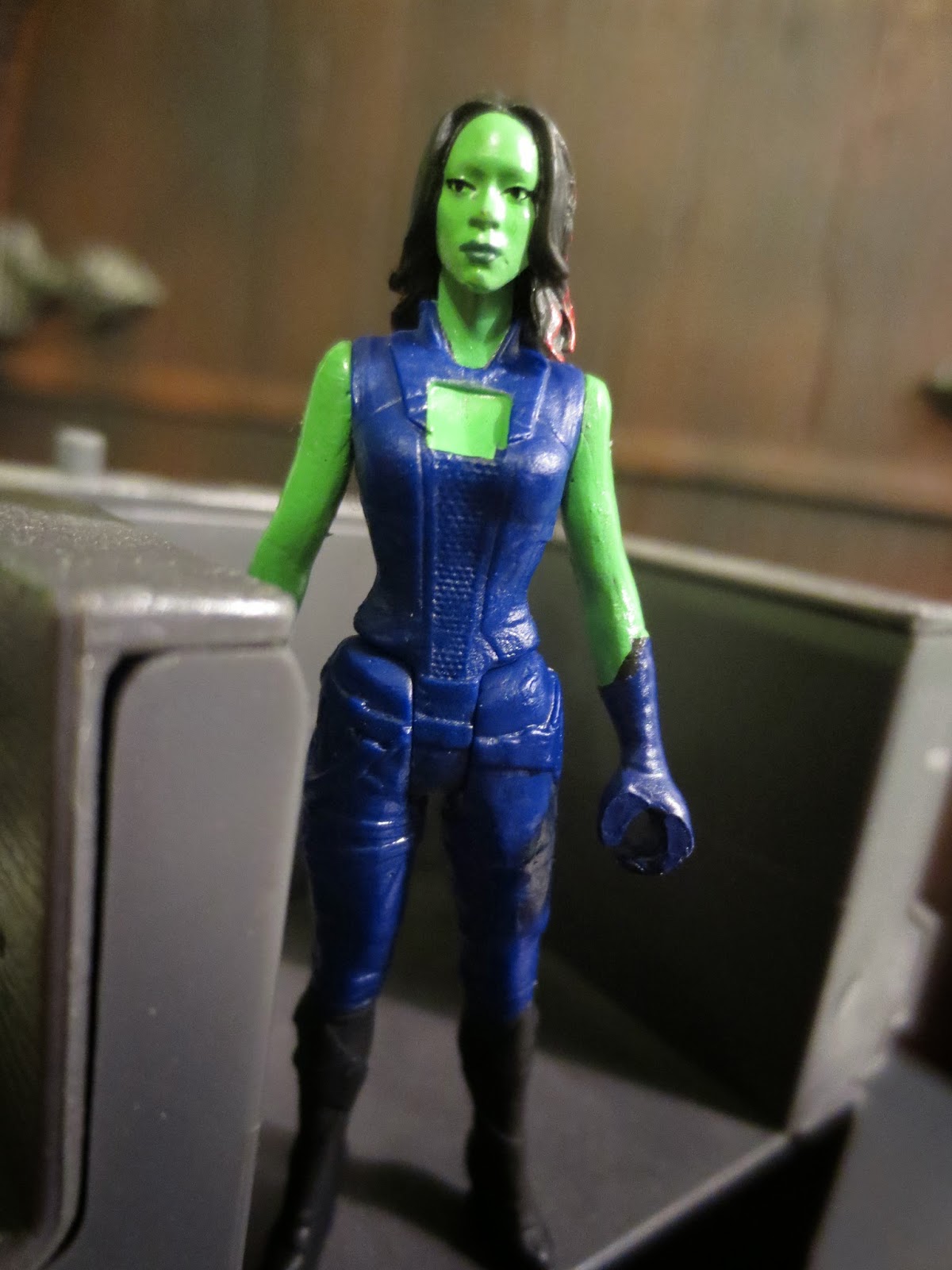 * I'll go out on a limb here and say that I think the sculpts on these are good. Really good for this scale, actually. While the Star-Lord headsculpt doesn't exactly scream Chris Pratt, Gamora really looks quite a bit like Zoe Saldana. It's a great resemblance, actually. The costumes even feature some fairly crisp details. Gamora has a few different textures and some detailed boots while Star-Lord's jacket has it's unique armored plating and the jets on his boots. 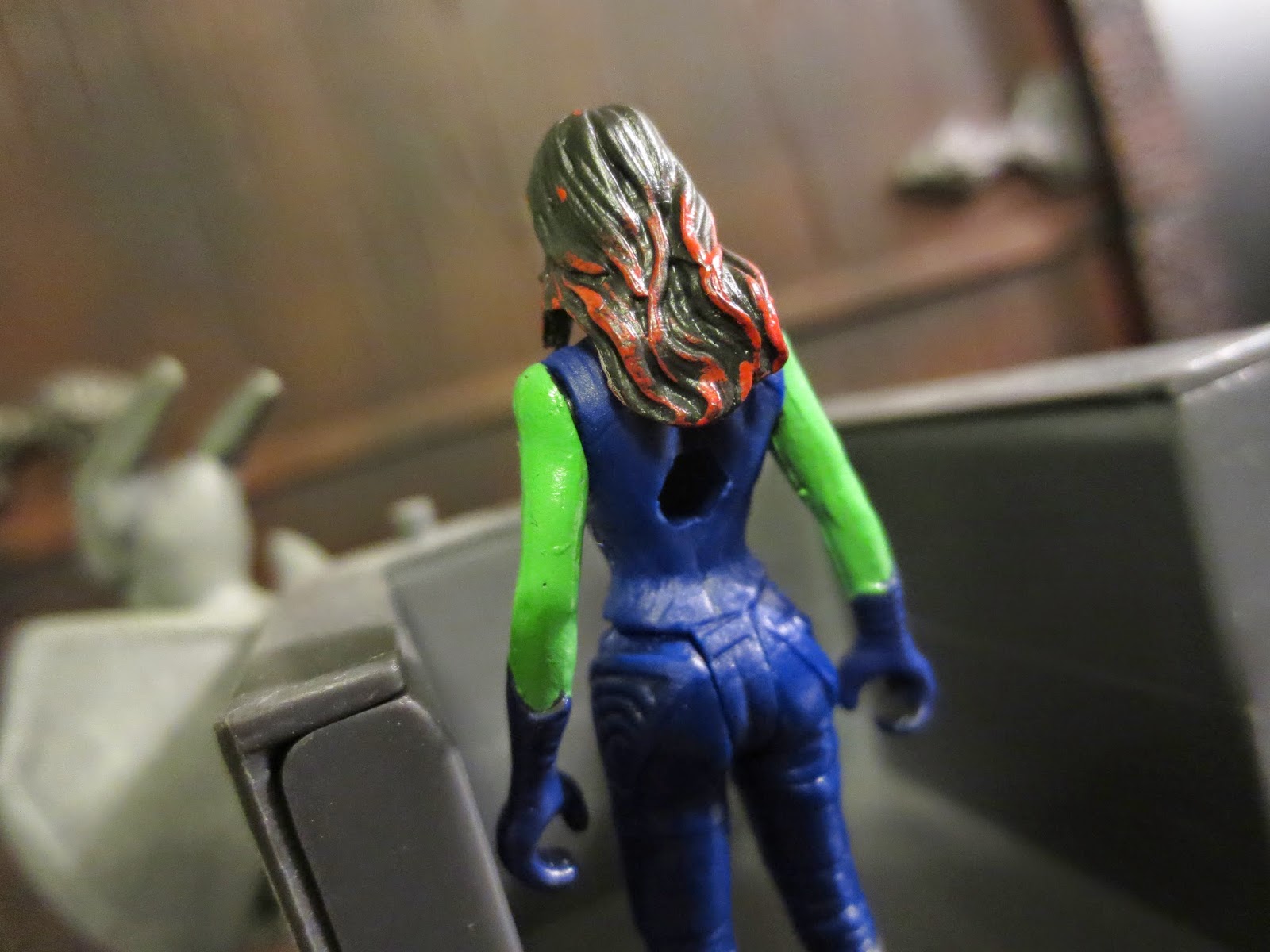 * The paint is also pretty nice. For 2 1/2 inch mass market figures, there is some really clean work here. Not a lot of detail, per say, but smaller features like Star-Lord-s facial hair and the colored streaks in Gamora's hair look really good. These look much better than I expected. 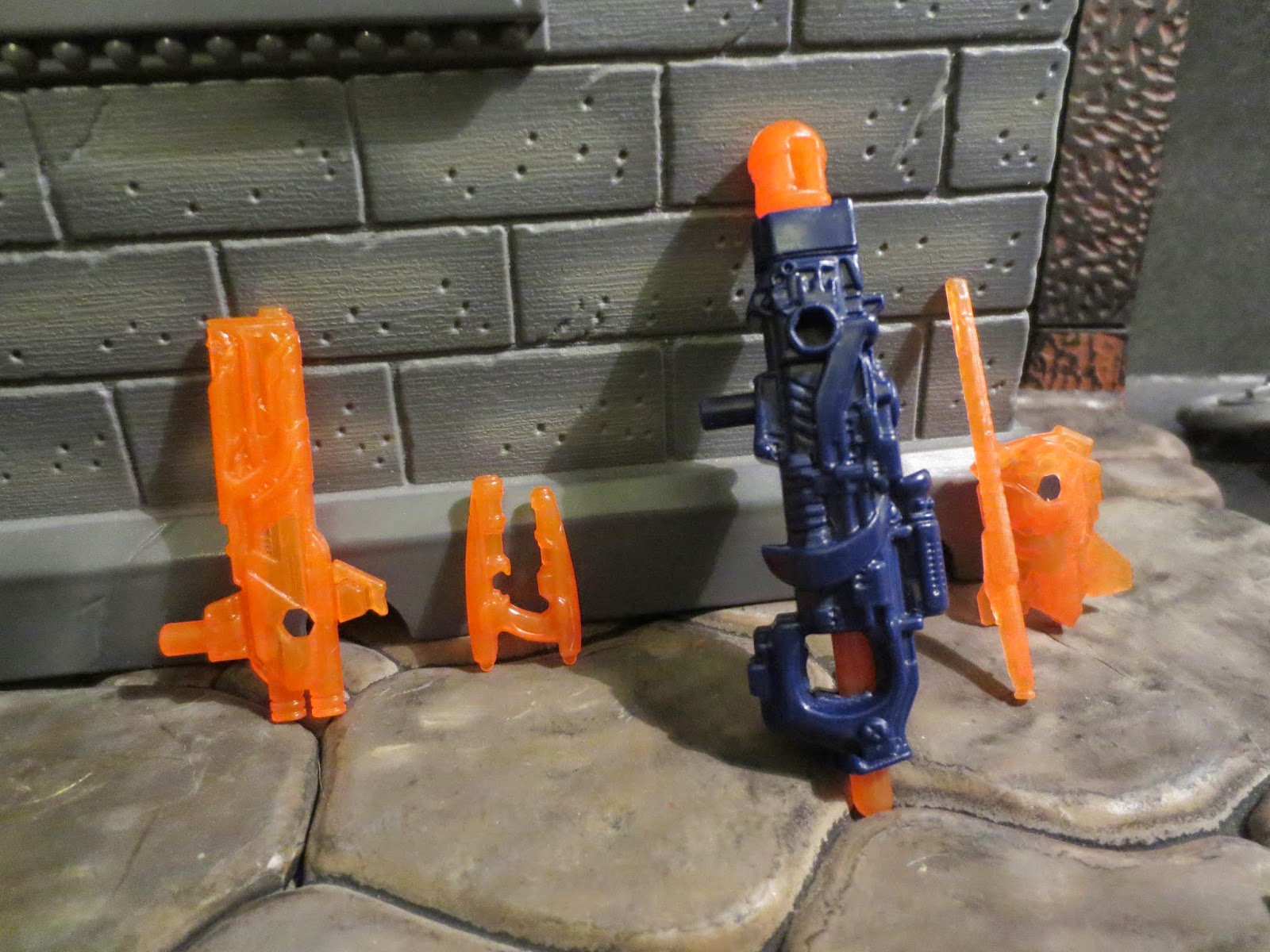 *These figure two-packs each come with a ton of accessories. Most of them come attacked to a plastic tree (like a model kit or the original TMNT figures) and you have to break them off, but it was fairly easy to do. It's not quite clear who gets what, but one of Star-Lord's pistols is included along with Gamora's unique sword. The other three accessories (jet pack, rifle, and missile launcher) have pegs that can attach to the figures' backs or to other accessories. It's a neat feature and allows for a bit of creative fun. They can also attach to the vehicles in this line. The weapons are all molded in a translucent orange plastic. That's a bit odd, but it's not really a negative to me. What is a negative, though, is that... 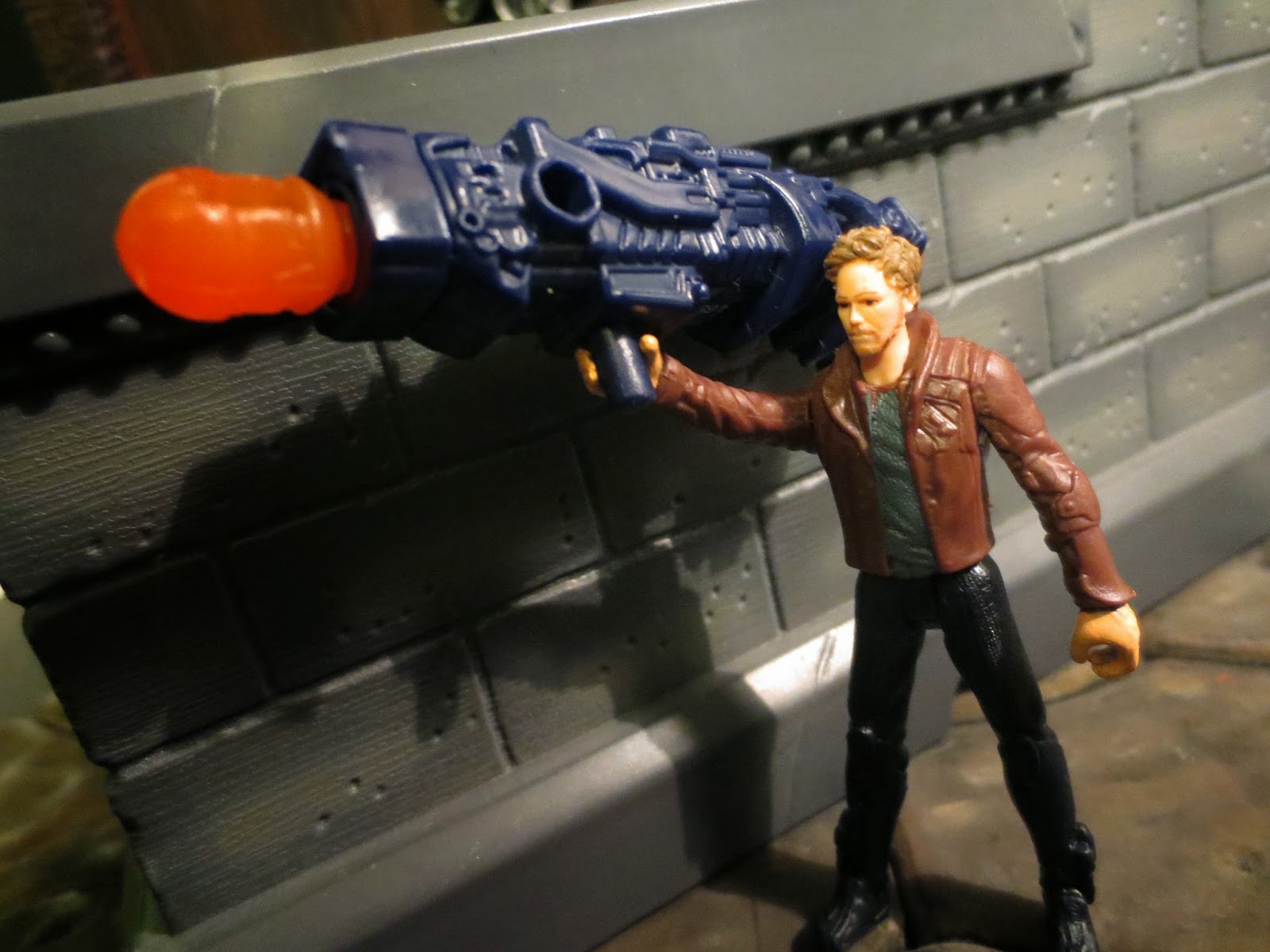 *The weapons are too big. Much too big. The characters can hold most of them, but these seem more scaled for a 1/18th scale line. Gamora's sword is over 3/4s as tall as she is and there's no way any of these figures are holding the giant missile launcher. I guess Hasbro was concerned that kids young enough to be interested in these would feel compelled to eat the accessories? The oversized accessories add a feeling of cheapness that isn't necessarily present with the figures themselves. They make the toys feel like they're not as well thought out as they should have been. 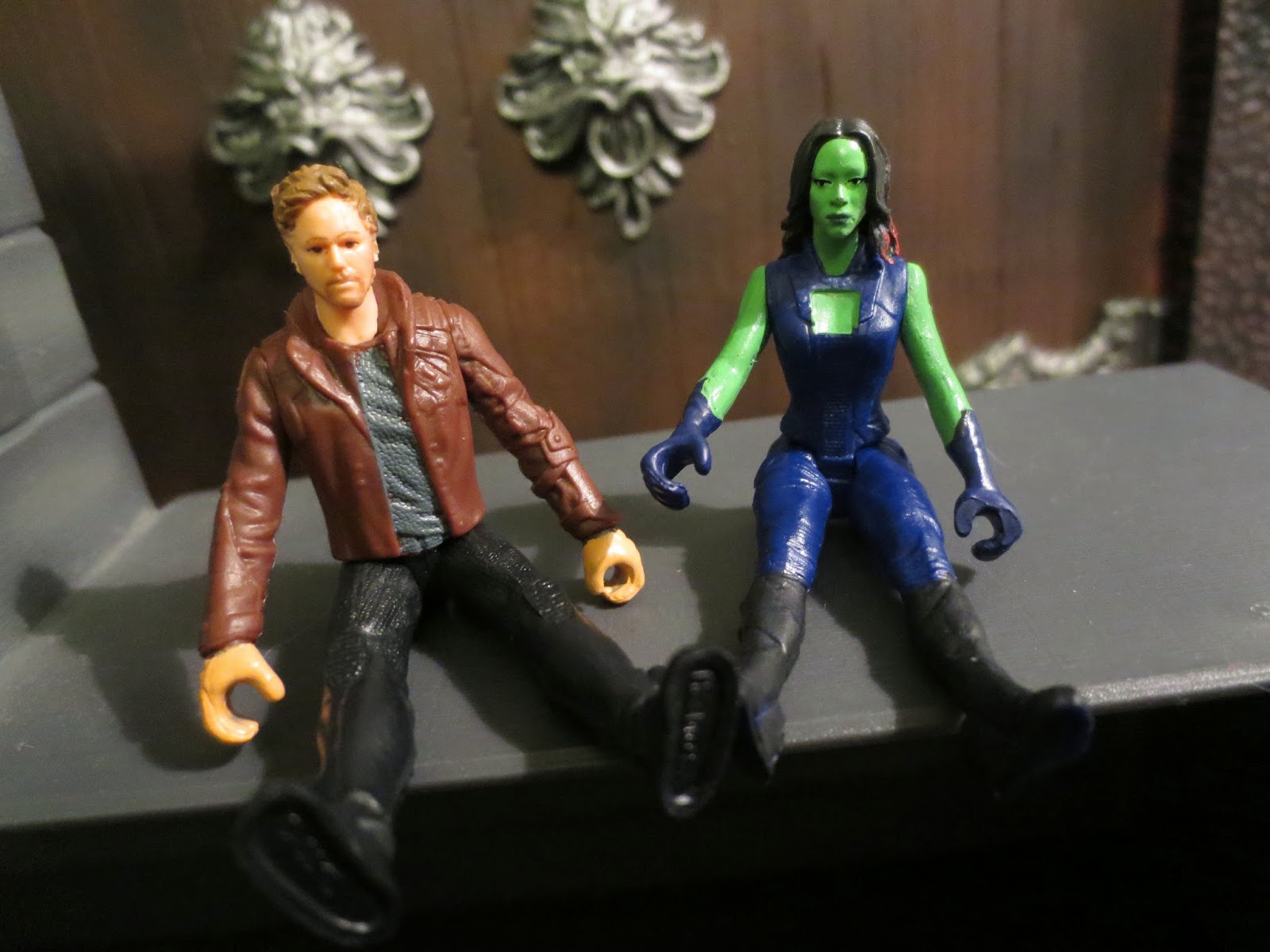 * Typically I don't complain about the scale of a figure unless it's in relation to another figure in the same line(i.e. if a Batman figure was 6 inches while a Penguin figure in the same line was 6 1/4) but I'm going off the hinges here a bit. I can see what Hasbro was going for here with a smaller scale as they tried to release multipacks and make characters that could fit in with other vehicles. Unfortunately, they launched a new scale at the expense of kids and collectors who have spent time and money amassing a 1/18th scale Marvel Universe. It's odd and pointless, in the same way that Hasbro shifted the Spiderman 3 line to a smaller scale when everything up until that point fit in fairly well with Toy Biz's movie lines and Marvel Legends. Had they also offered film based Guardians figures this wouldn't bug me, but since they neglected those (other than some comic based repacks) this seems like a bad move. Of course, now they're releasing the Avengers figures in this same scale.... 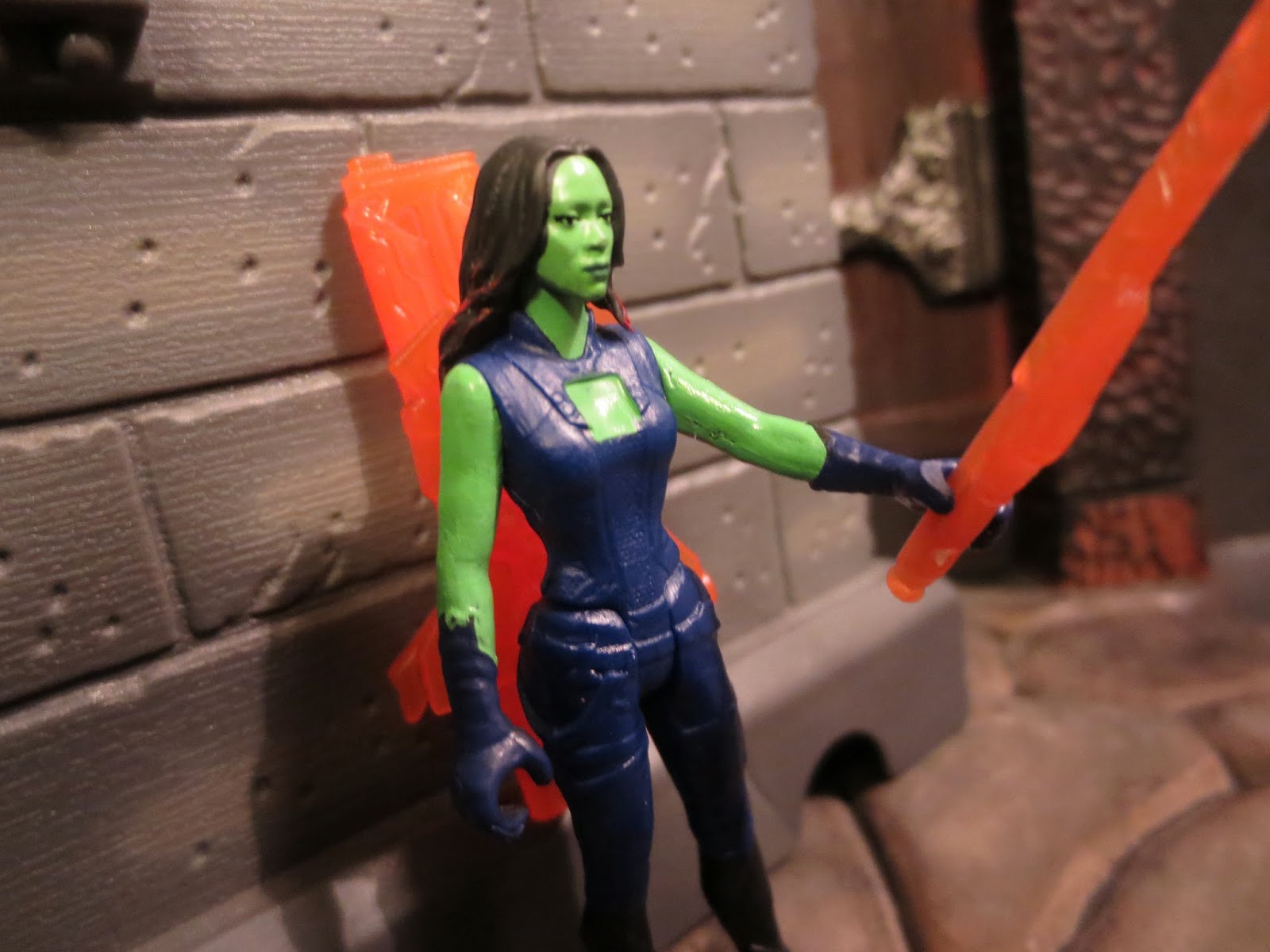 I have to say that these little figures aren't bad in and of themselves. I think I'm just more disappointed that we didn't get a good 1/18th scaled Guardians of the Galaxy line. It's also disappointing that there wasn't more variety. Don't get me wrong: This line did contain all of the Guardians, a Star-Lord variant, Ronan the Accuser, Korath, and Sakaaran and Nova Corp army builders, but considering the size of these it would have been cool to see characters like Yondu and Nebula. As it stands, these are are Good and a 1/2 figures, but they're far less useful due to their size and bizarre accessories. If I saw these on clearance (my Wal-Mart still has shelves of them) I might be tempted to pick them up, but I'd probably have to stop and ask the question: "What would I display them with?"

I've reviewed a few other Guardians of the Galaxy items, too:

Marvel Legends Infinite Series: Guardians of the Galaxy by Hasbro
Drax
Star-Lord
Posted by Barbecue17 at 4/01/2015