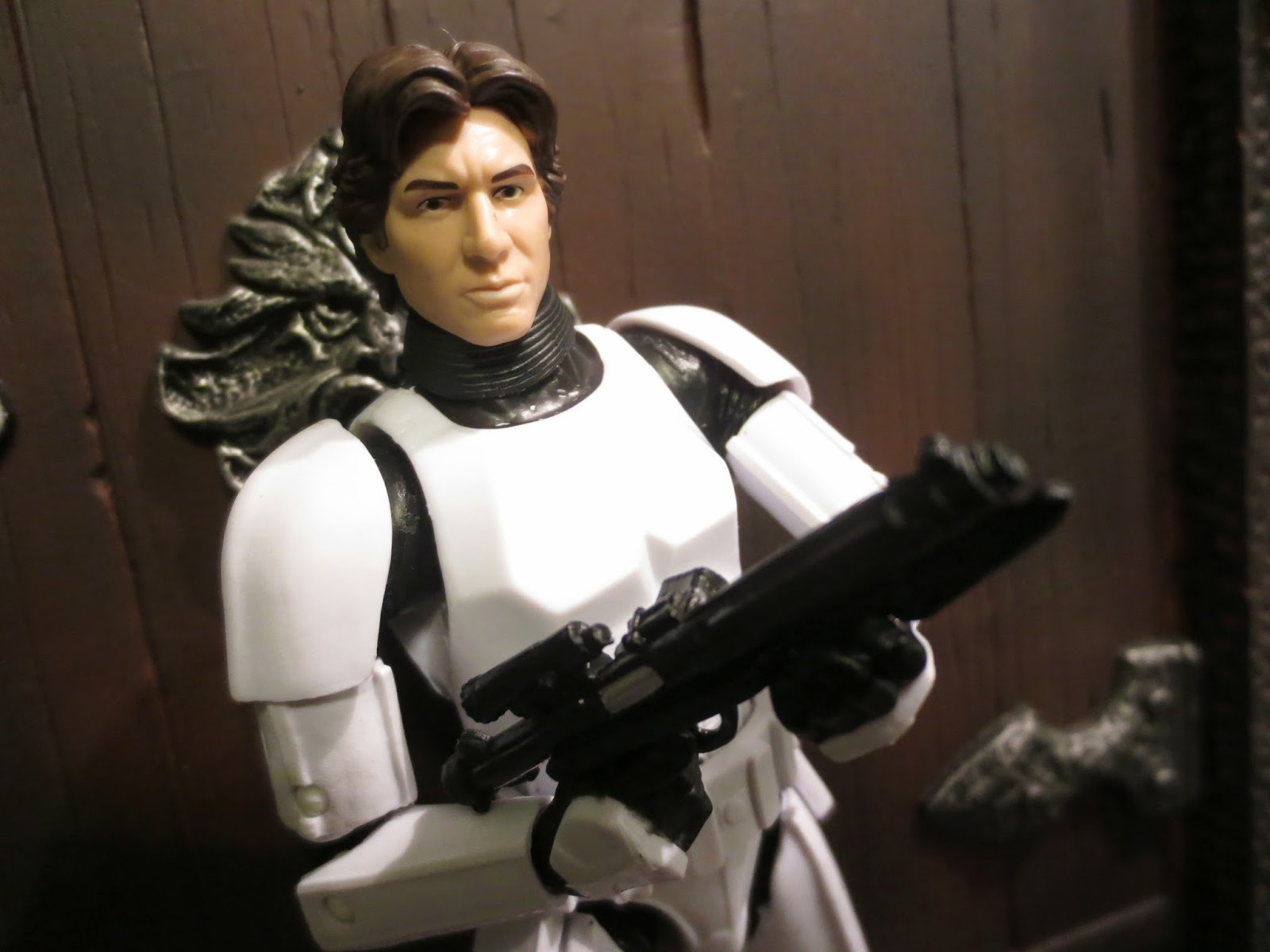 I've written before about having Star Wars figures sitting around my house as a kid and not knowing what they were, but the first Star Wars figure I ever "purchased" was the Power of the Force II mail-away figure of Han Solo in Stromtrooper Disguise from Kellogg's. In all honesty it was my first real exposure to Star Wars. I was in 6th grade and we had some sort of school project where we had to bring cereal boxes to class. At some point I looked at a classmate's cereal box and saw the order form for Han Solo. Without even knowing who the character was I was impressed by the toy. I really, really wanted that figure! After our project the classmate gave me his cereal box and I proceeded to order Han Solo that day without even knowing anything about Star Wars. The next day I went to my 6th grade teachers book shelf that was stocked with sci-fi and fantasy books and noticed a copy of the Star Wars novelization (ghostwritten by Alan Dean Foster) and borrowed it. From there, my friends, it was a one way trip for me to a galaxy far, far away. I've been trying to limit my The Black Series collecting to troopers, bounty hunters, characters from the first year of The Power of the Force II, and the odd character I have special affection for (i.e. Admiral Ackbar), so not only did this Han Solo in Stormtrooper Disguise qualify as both a trooper and a character released in the first year of Kenner's The Power of the Force II line but he's also a character I have special affection for due to my memories of ordering him from a cereal box. Ready for a look at the newest version of everyone's favorite smuggler? Then join me after the break... 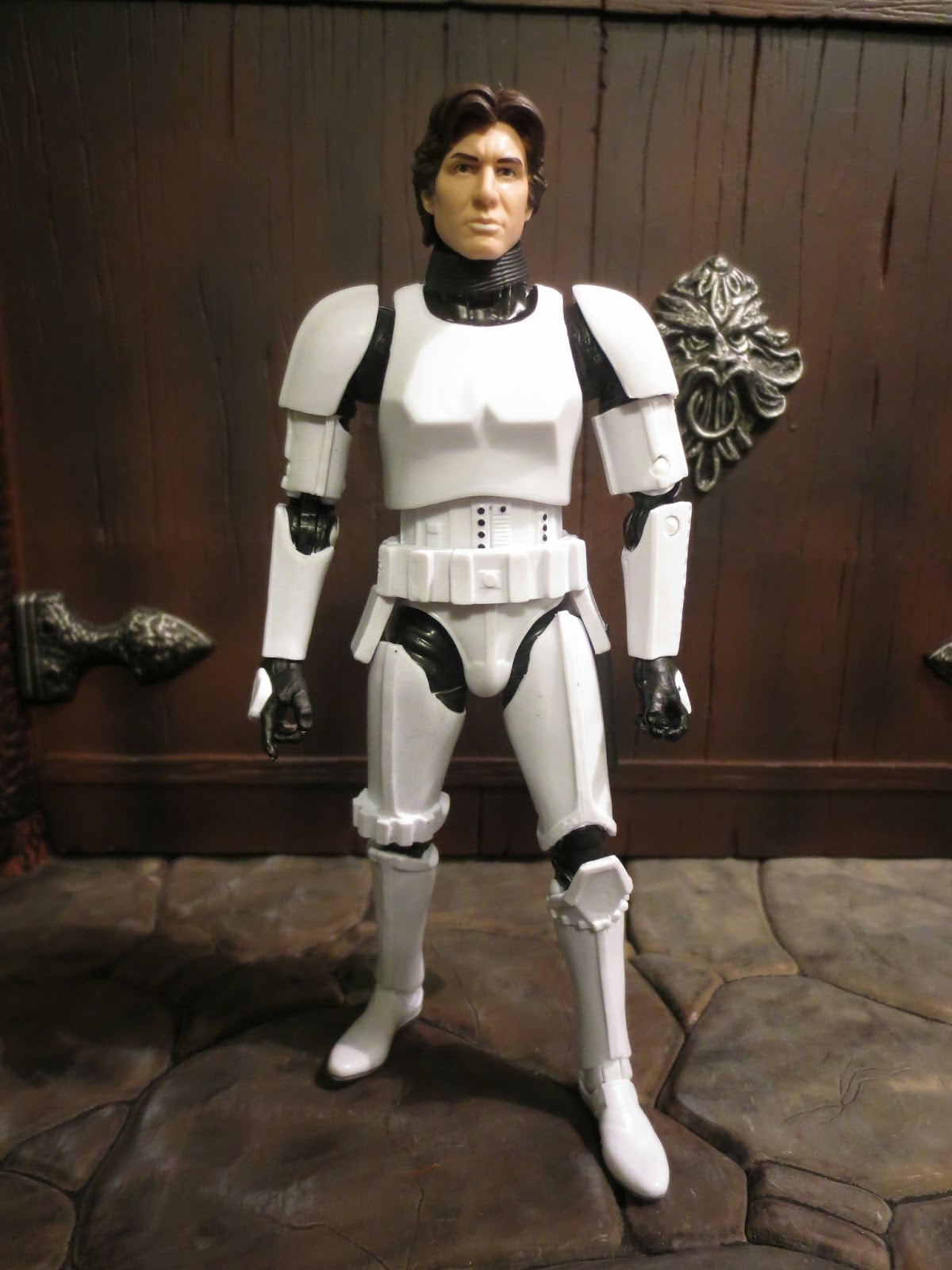 Right off the bat it's probably important to point out that if you have the Black Series Han Solo and the Stormtrooper (or any variant of that figure) then you already have 85% of this figure. This figure really doesn't even qualify as a repaint; it's more of a simple head swap with a few new pieces. Of course, I don't really consider that a problem since this is entirely film accurate. The figure stands right around 6 1/8th inches tall which is the same height as both the basic Stormtrooper figure and the regular Han Solo (The Luke in Stormtrooper disguise is supposed to be shorter to reflect Luke's much smaller stature). 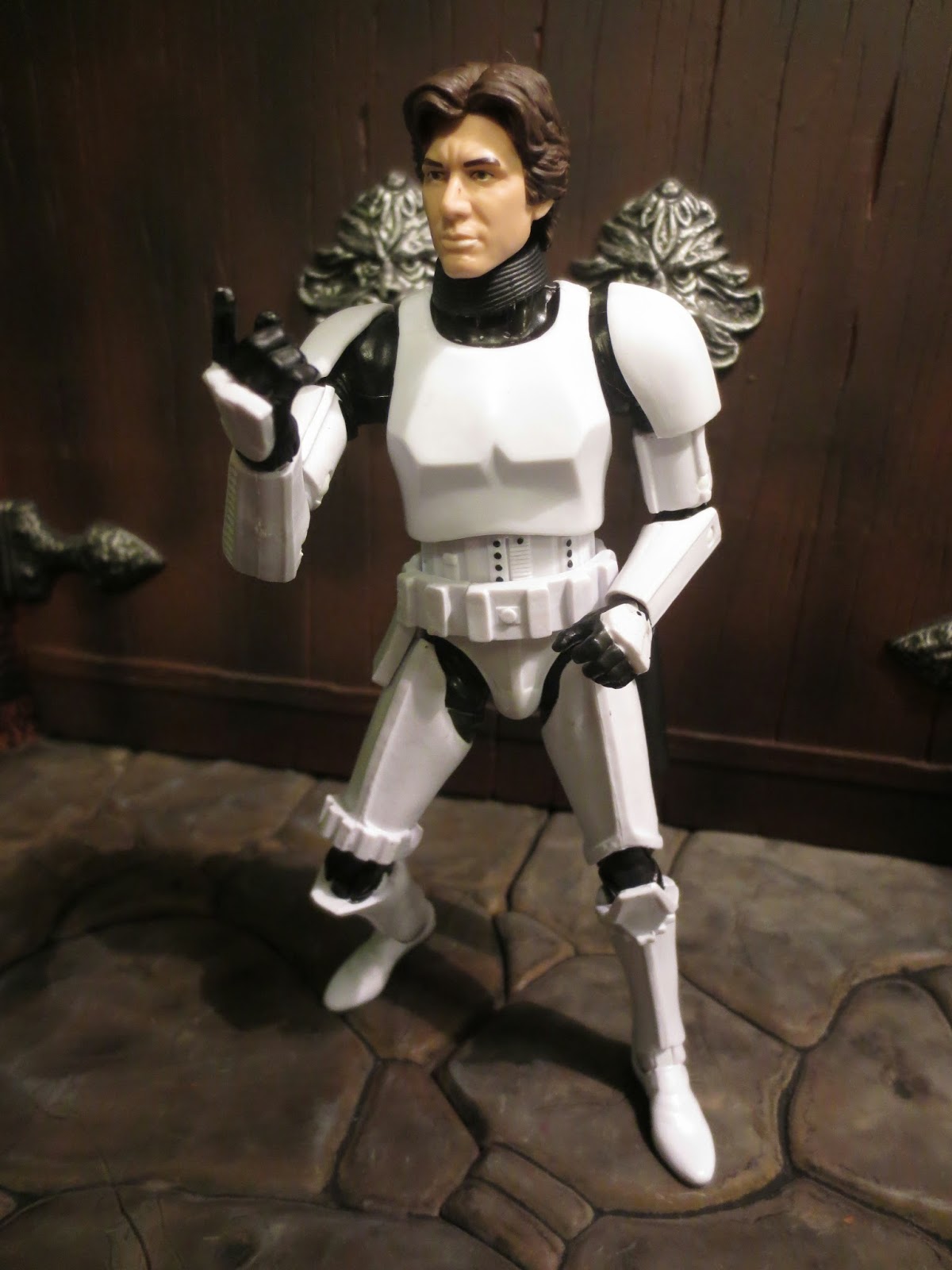 Han's articulation is exactly the same as the basic Stormtrooper figure and works really well. One of the improvements that I've noticed is that the hinged on the elbows and knees actually feel a bit less rubbery than they did on the Stormtrooper or on the original Sandtrooper figure. Seriously, this is an excellent Stromtrooper mold and I haven't been disappointed with it yet. I'd much rather Hasbro stick with one good mold than keep releasing versions of differing qualities. Interestingly, Han has different neck peg than the basic trooper and has a bit better range of motion. 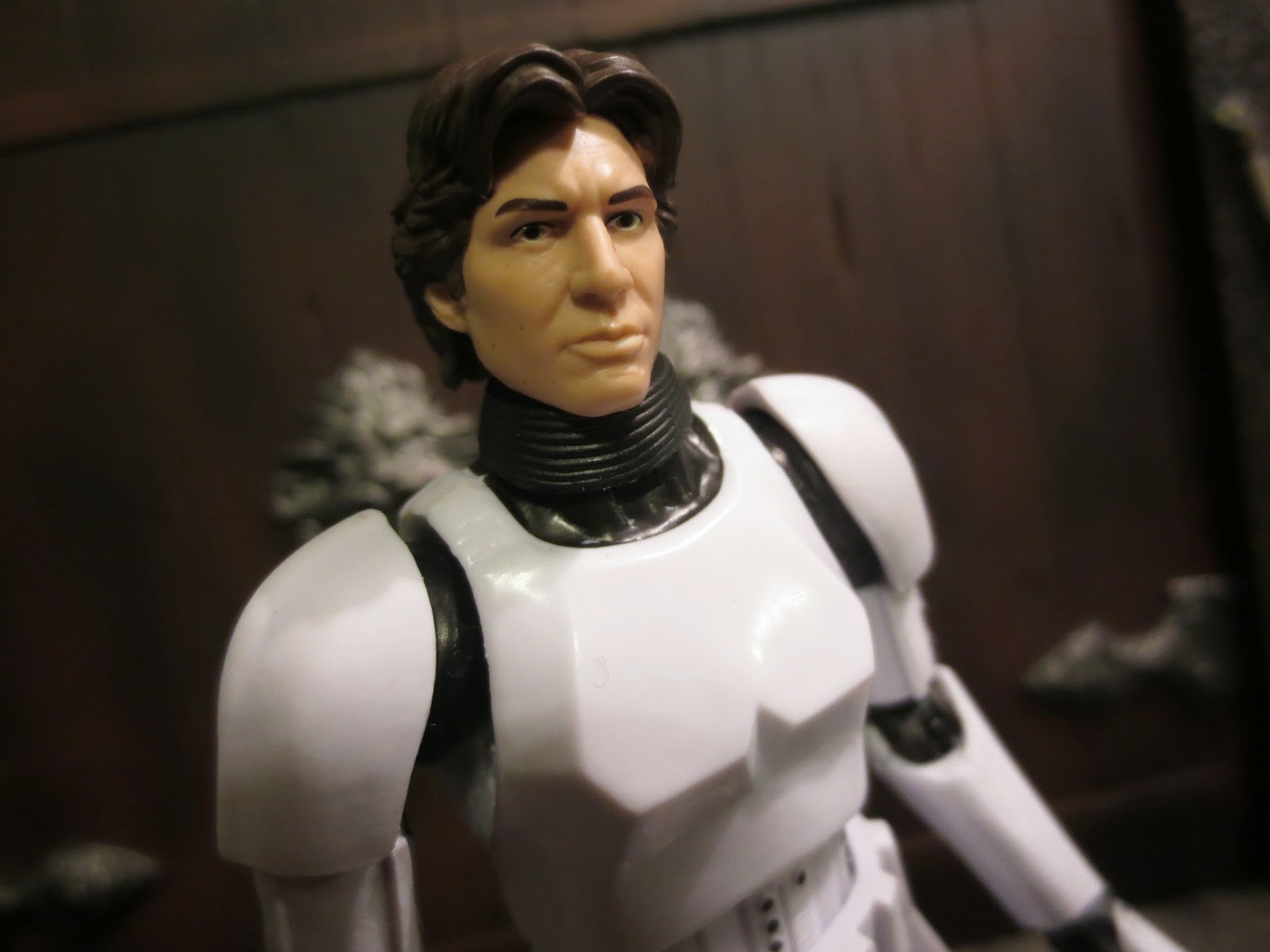 Again, since this is simply the same Stormtrooper body reused, I'll refer you to that review again. Everything is still in place and looks great. Han's head sculpt is a bit more complicated, though. I've looked at this head sculpt over and over and I do believe it's different enough from the first version to qualify as a new sculpt. It is without a doubt repainted but, looking at it, it just seems to have sharper details and a much more accurate Harrison Ford likeness. Here's what I think: The sculpt from the first figure was done digitally and was modified a bit from the first release. That's why so many details are still the same but the face is slightly different. It looks good, though, and is a definite improvement from the first Han Solo figure in this series. Another improvement is the "collar" piece that fits over Han's neck. Not only does it make the figure look better when he's not wearing his helmet but it is also more screen accurate. 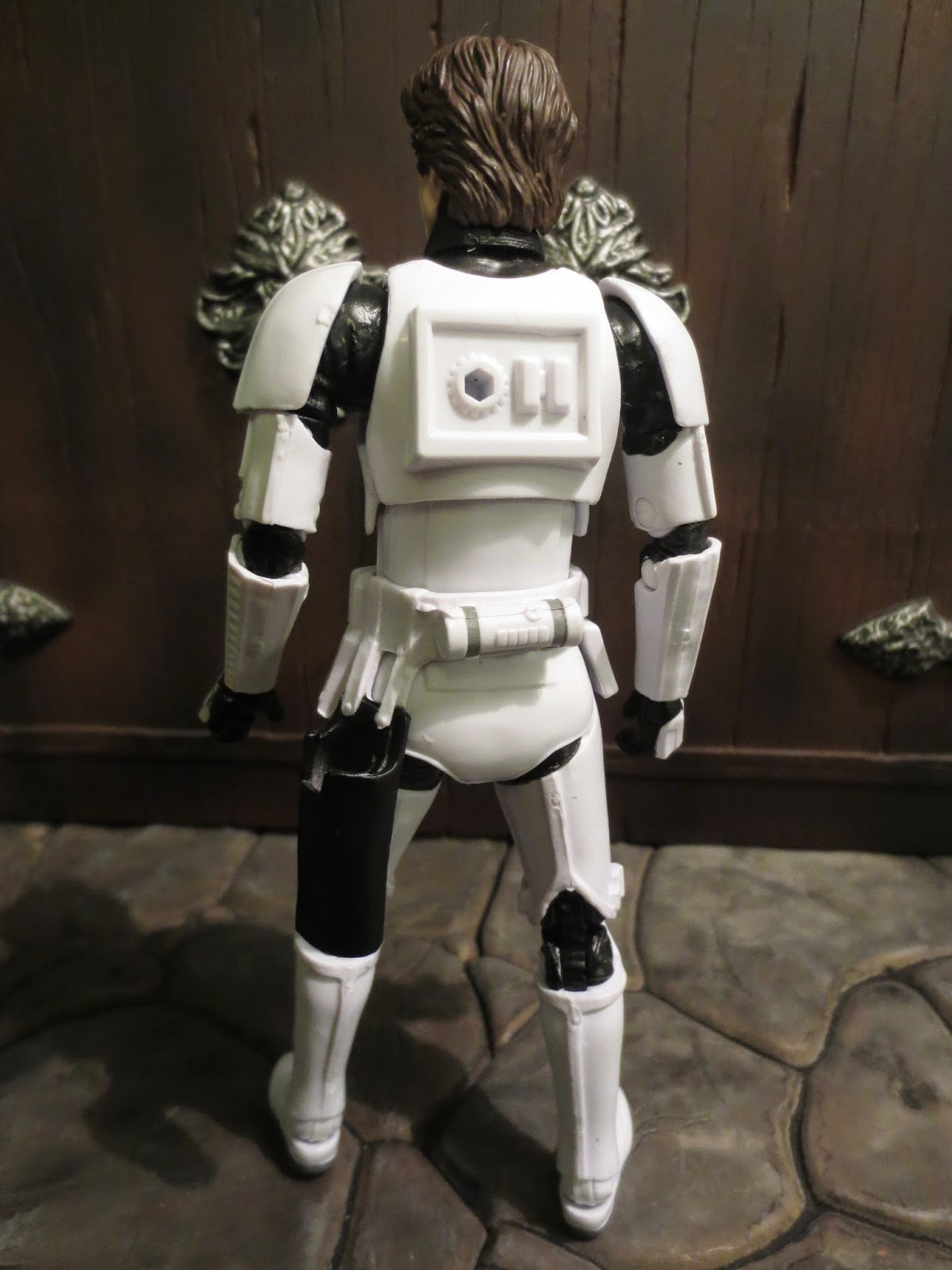 The paintwork looks pretty good, particularly for a figure that's white and black (darker and lighter colors mixed sometimes spell trouble for paint coverage). There's nothing really different about Han's Stormtrooper armor compared to the basic figure. The only thing that comes to mind is a bit of a paint error on the neck where some chipped paint reveals the white plastic through the black of the bodysuit. What does look much better than on the previous figure, though, is Han's head. Han's skin looks a bit more lifelike and his hair is a lighter brown that seems to better reflect Harrison Ford's 1977 hair. 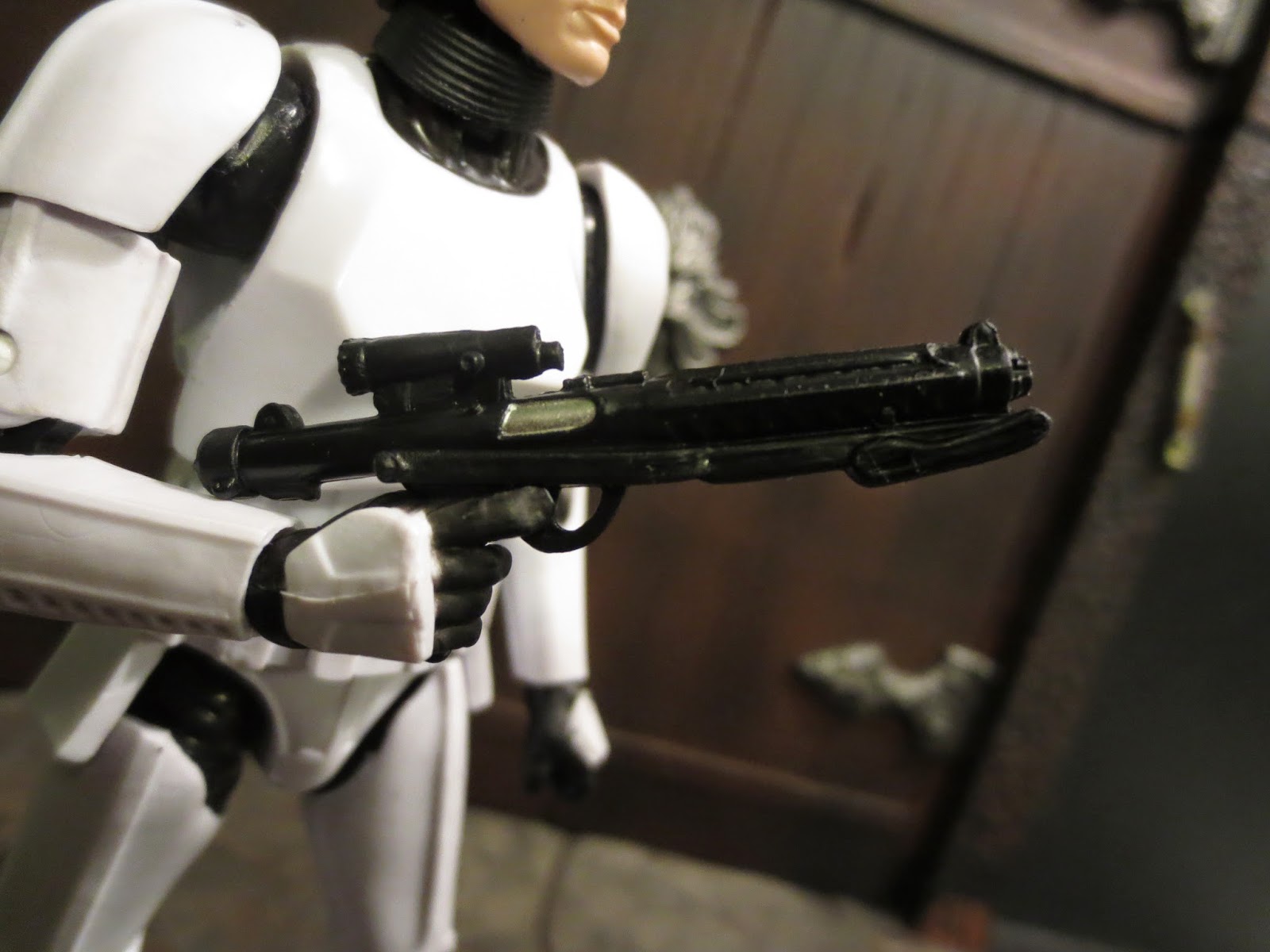 Han comes with two accessories: The Blastech E-11 blaster rifle and helmet that he both stole from a lowly Stormtrooper. The blaster rifle is a mold we've seen many times before but here it does get a nice silver paint app on the side of the gun (where the real world Sterling machine gun would have ejected shells). You can never have too many of these. 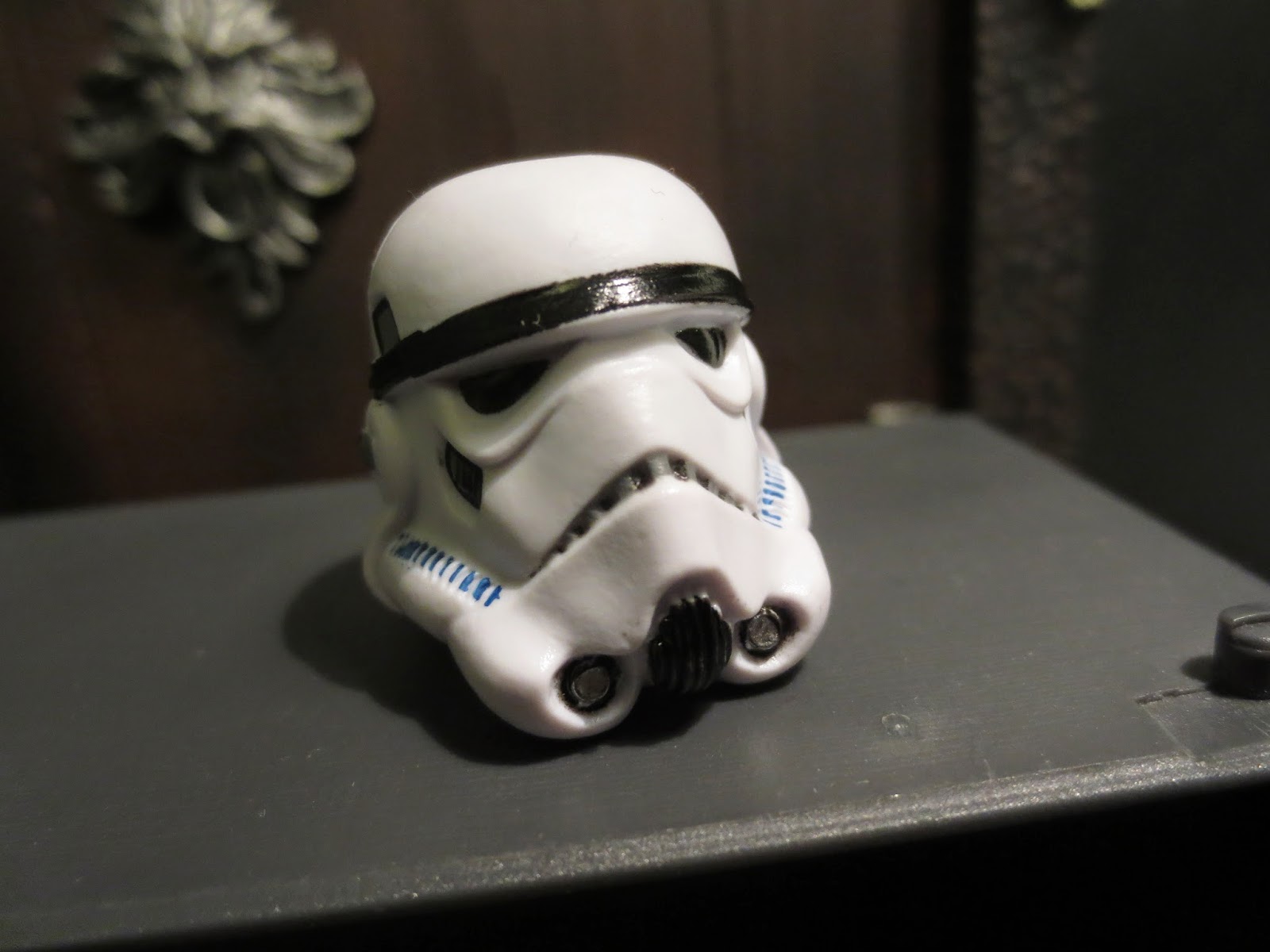 The accessory that really defines this figure, however, is the removable Stormtrooper helmet. In all honesty I think many collectors would have been just fine with Hasbro including an extra Han Solo head and an extra Stormtrooper head with the figure. Of course, since those headsculpts have differently sized sockets, that probably would not have worked, thus we get a true removable helmet. Often when action figures have removable helmets we get figures whose heads are too small or helmets that are too big. Hasbro decided to enlarge the helmet rather than shrink Han's head but guess what? It really doesn't look too bad. The helmet is only a little bit larger than the basic Stormtrooper headsculpt and looks pretty good on Han's head. Oddly enough, the proportions do seem a bit different (the eyes are smaller but the helmet itself seems taller) but you really have to look at the helmet alongside a regular Stormtrooper figure to notice. Hasbro pulled this off quite well. 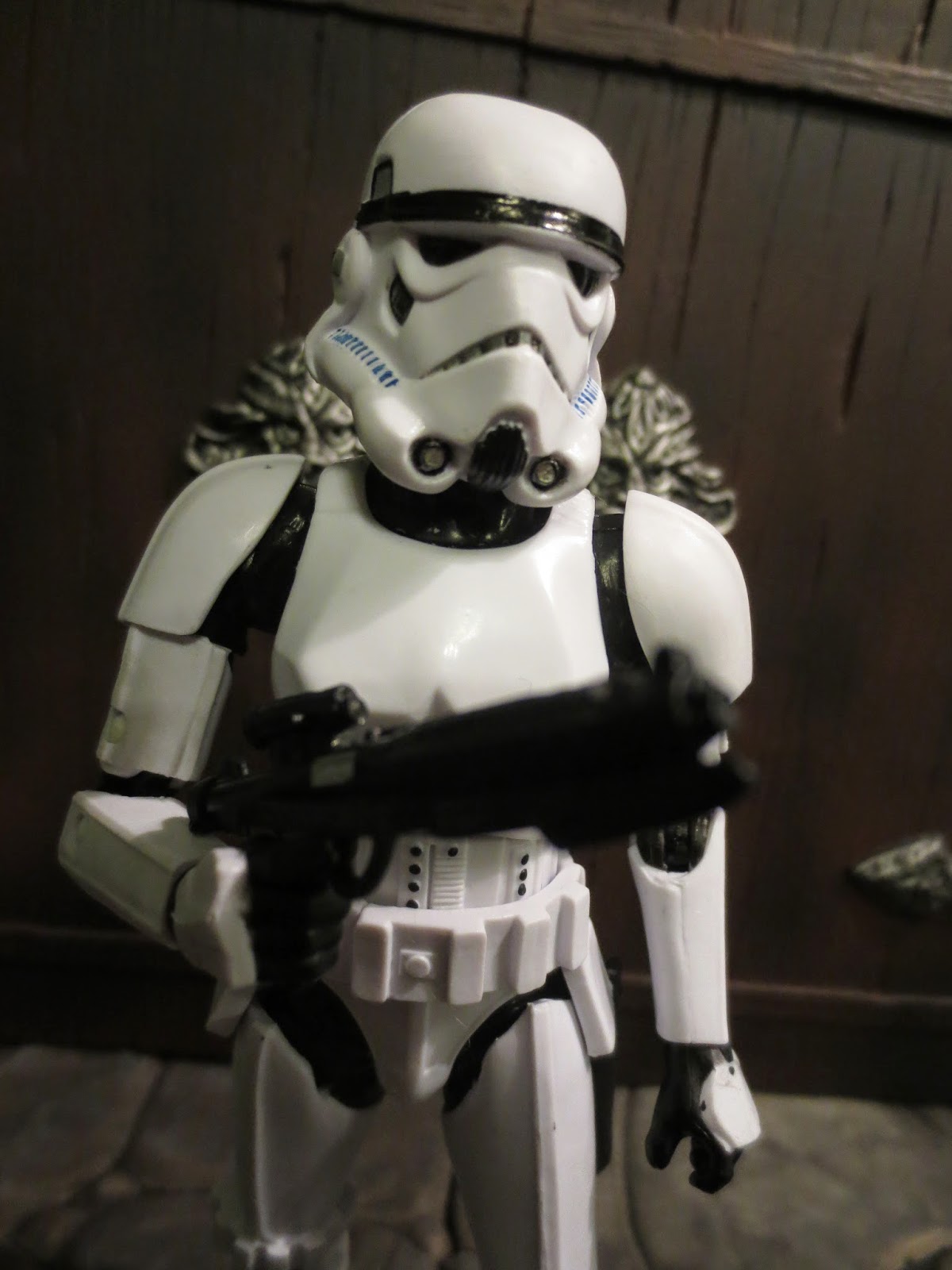 Technically, Han is a really well done figure. He's got a better headsculpt than the first version of the character, uses the incredibly designed Stormtrooper body, and comes with two accessories. On paper that all sounds good but there's something about this figure that feels a bit.... stale? I like this figure, don't get me wrong, as I've always loved these disguised variations of Han and Luke, but when we're so early in this line's lifespan a head swap variant seems like a cop out. I guess that most 6 -7 inch lines like Marvel Legends or Masters of the Universe Classics feature a lot of room for reusing bodies. Other than basic troopers, Star Wars really doesn't offer that. This isn't a bad figure at all but I kind of wish that maybe Hasbro had thrown in something a bit unique that we haven't seen in this line yet. A mouse droid, perhaps? Maybe some binders for Chewie? Anything would have made this figure feel a bit more exciting and less rehashed but, at the end of the day, this figure is still pretty well done. I'm pretty content with giving Han here a Great rating. 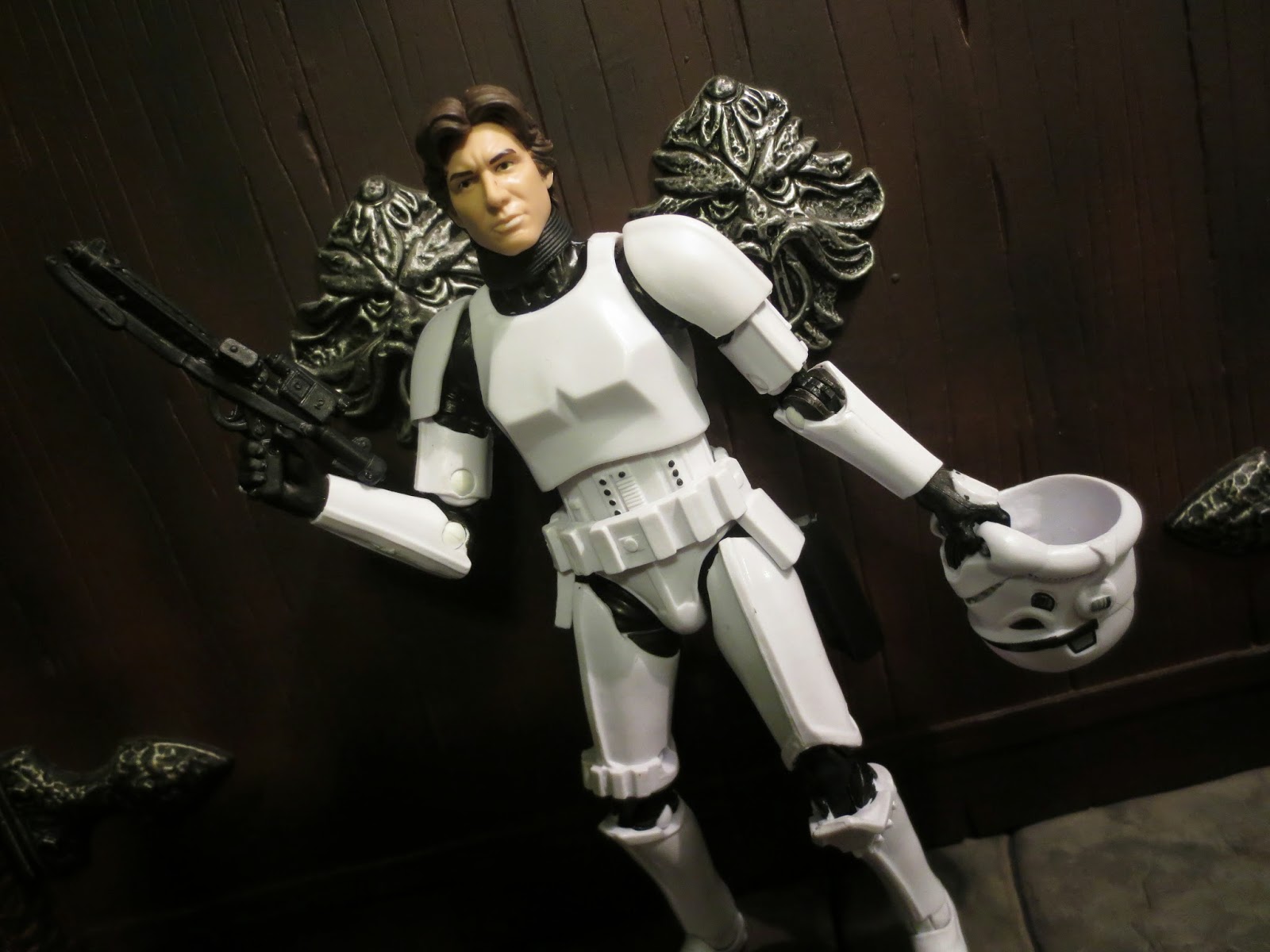 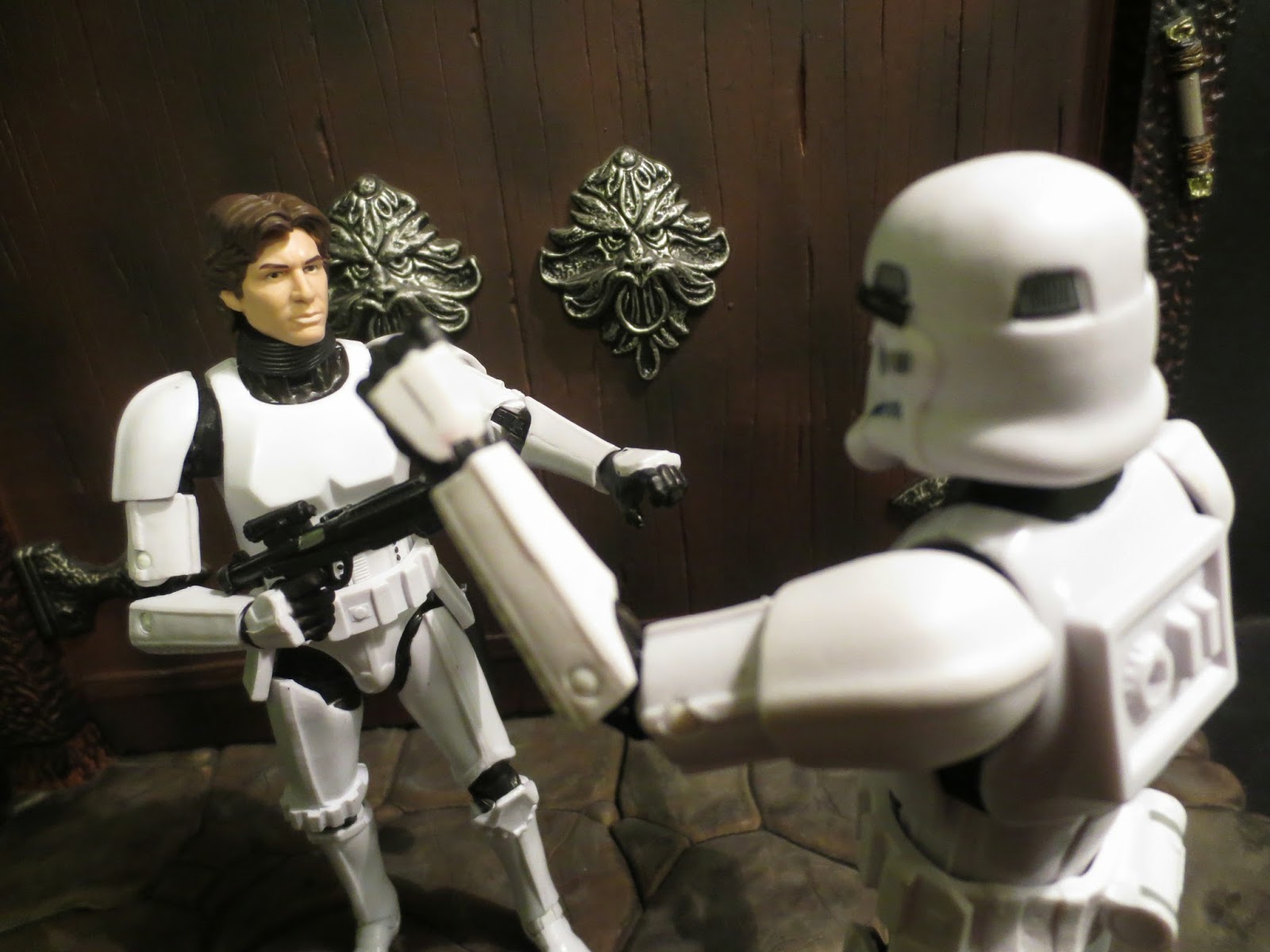