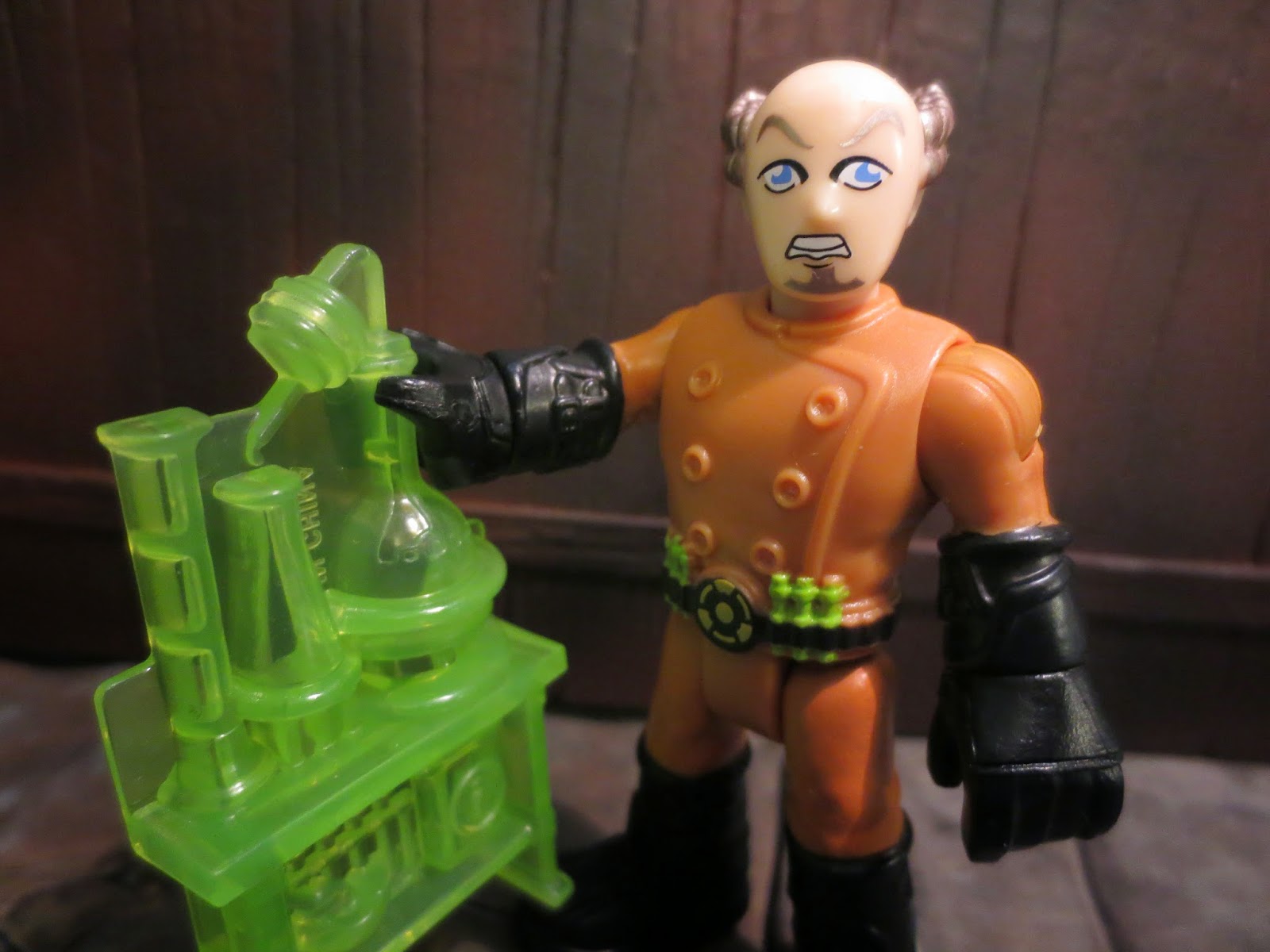 I'm on figure #7 of the new Imaginext Collectible Figures Series! While I haven't been as impressed by as many figures in this series as I have been by the past three sets, the Witch and the Space Gorilla have stood out to me as two of the best Imaginext figures overall. Today I'm looking at another really good figure from this series: The Mad Scientist! The Mad Scientist isn't your standard, typical Mad Scientist, though. He looks more like a villains from an early 90's cartoon or toyline. You know the type: G.I. Joe Eco-Force, the Toxic Crusaders, and Captain Planet. He's an interesting addition to the line and a fun figure all on his own. ready for a closer look at this guy? Then join me after the break... 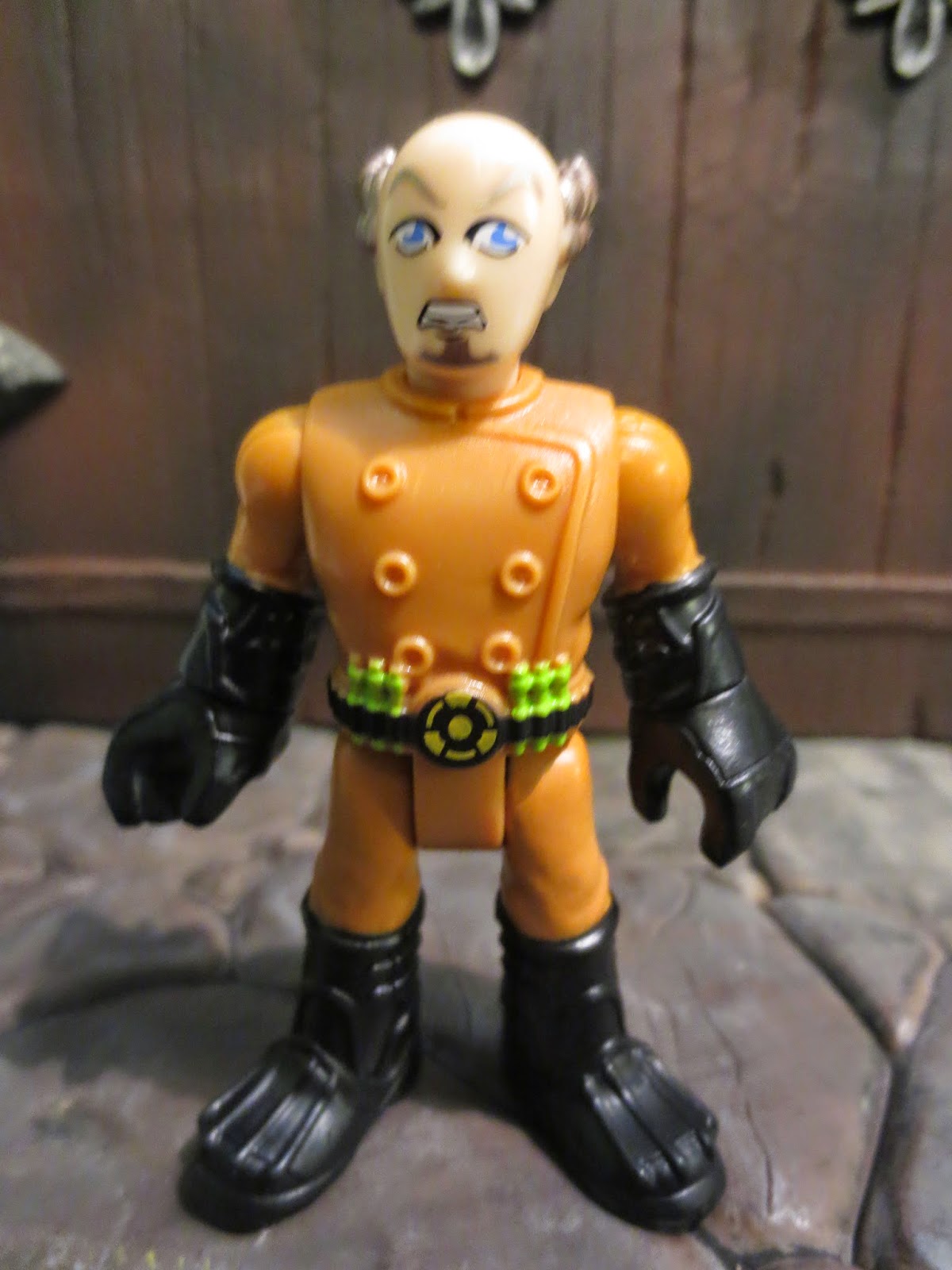 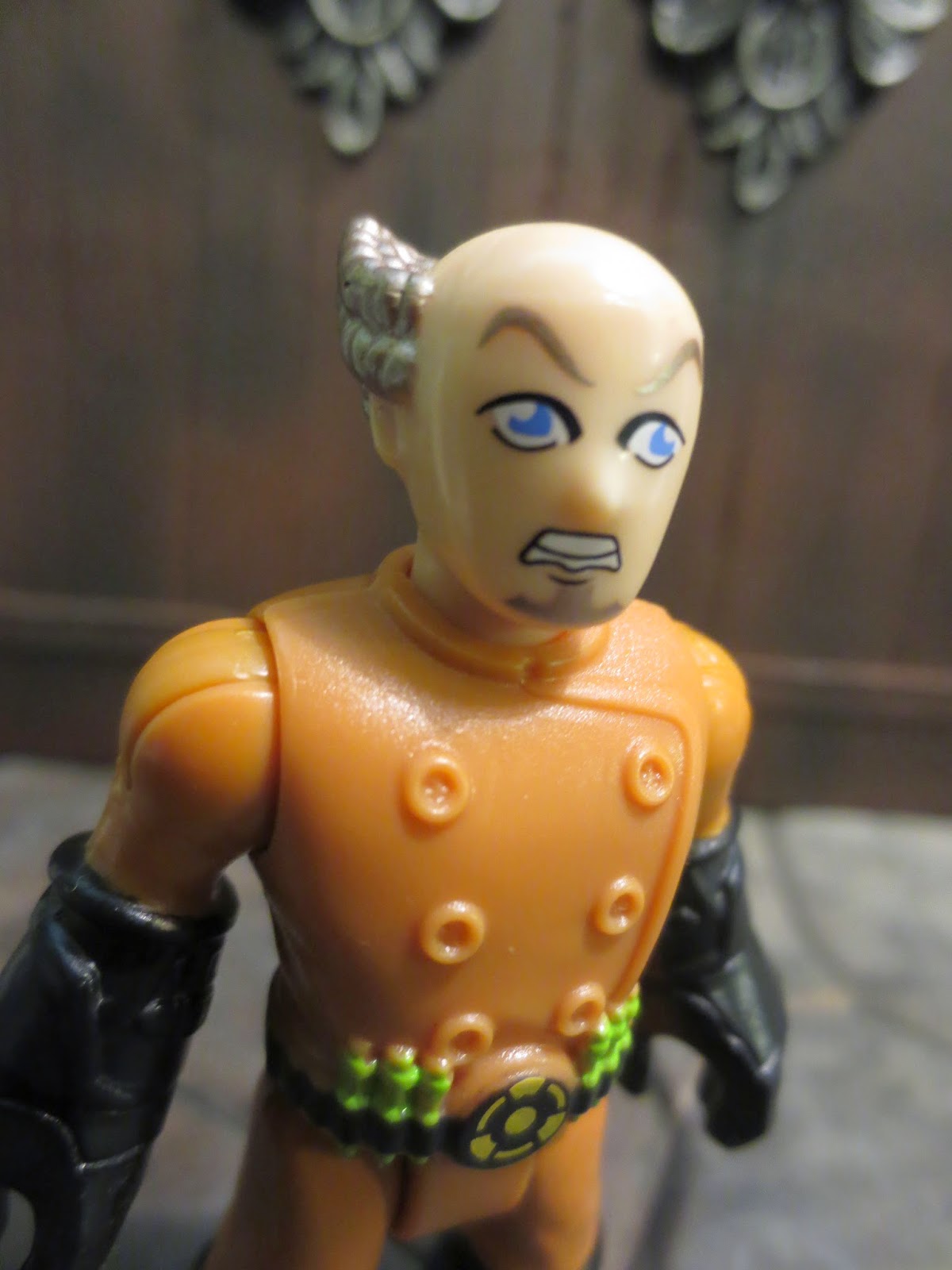 * I love the look of this figure! He's definitely got a "mad scientist" like look going on even though he somehow looks like a cross between Jim Carrey's portrayal of Count Olaf from Lemony Snicket's A Series of Unfortunate Events and President Business from The Lego Movie. It's the expression, the facial expression, and the hair. I'm digging the crazy, metallic hair. Yup, it's painted with a metallic bronze paint and it looks pretty cool.

*The sculpting on the Mad Scientist's uniform is also pretty impressive. I really like the buttoned over flap on the jumpsuit and the heavily padded boots and gloves. There's some cool tubes on his belt, too. What are they? Who knows! They really add a lot to the character, though. 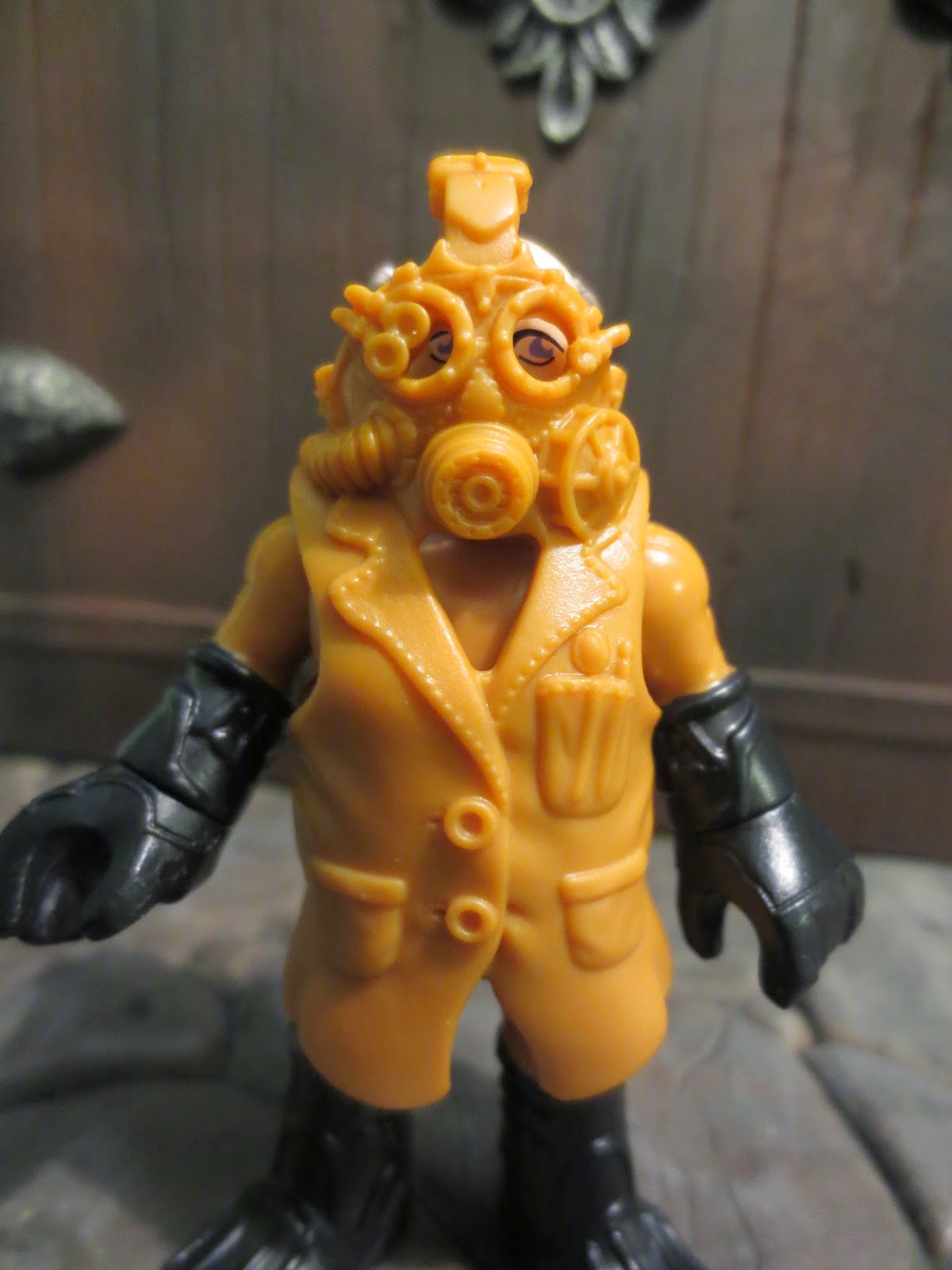 *The detailing on the Mad Scientist's lab coat and gas mask piece is also incredible. The gas mask has a vaguely steam punkish style and just has some incredible sculpting work. This piece really might be cool if a customizer utilized it with a G.I. Joe figure or something, too. 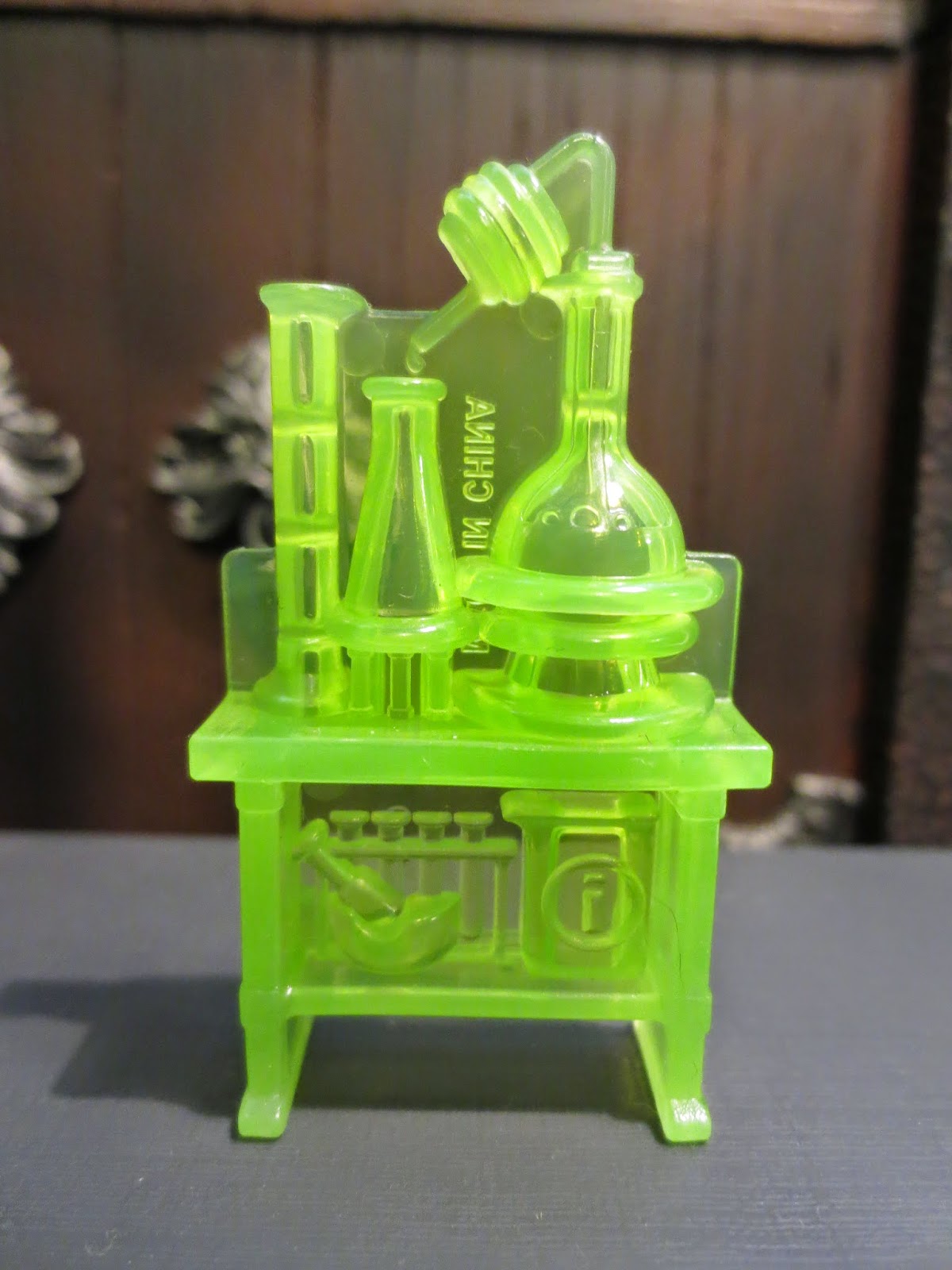 *The Mad Scientist comes with a fairly unique accessory: A translucent green chemistry kit. This is more of a diorama type piece rather than an accessory meant to be carried around (although the scientist could do that) but it's still a neat little extra that could fit in with a number of Imaginext themes. I could totally see this sitting around in the Batcave or in the wicked cool wizard's tower playset. 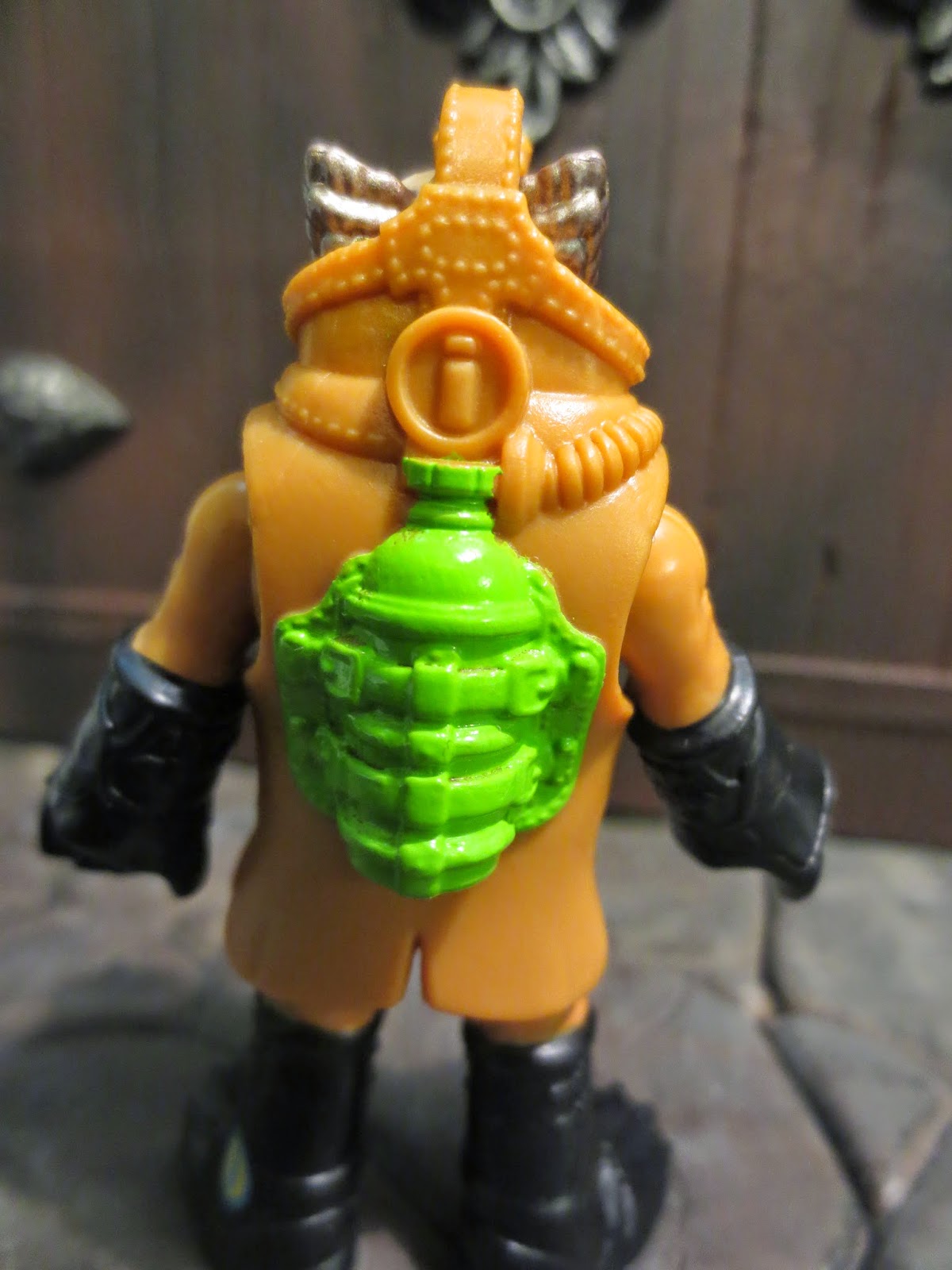 *The gas mask and lab coat piece is cool but it seems a bit lame that there are so few painted details on it. I'm fine with the coat being brown but why not at least paint the gas mask black? This would have looked much better. As it is, it's tougher to distinguish the details at a glance. 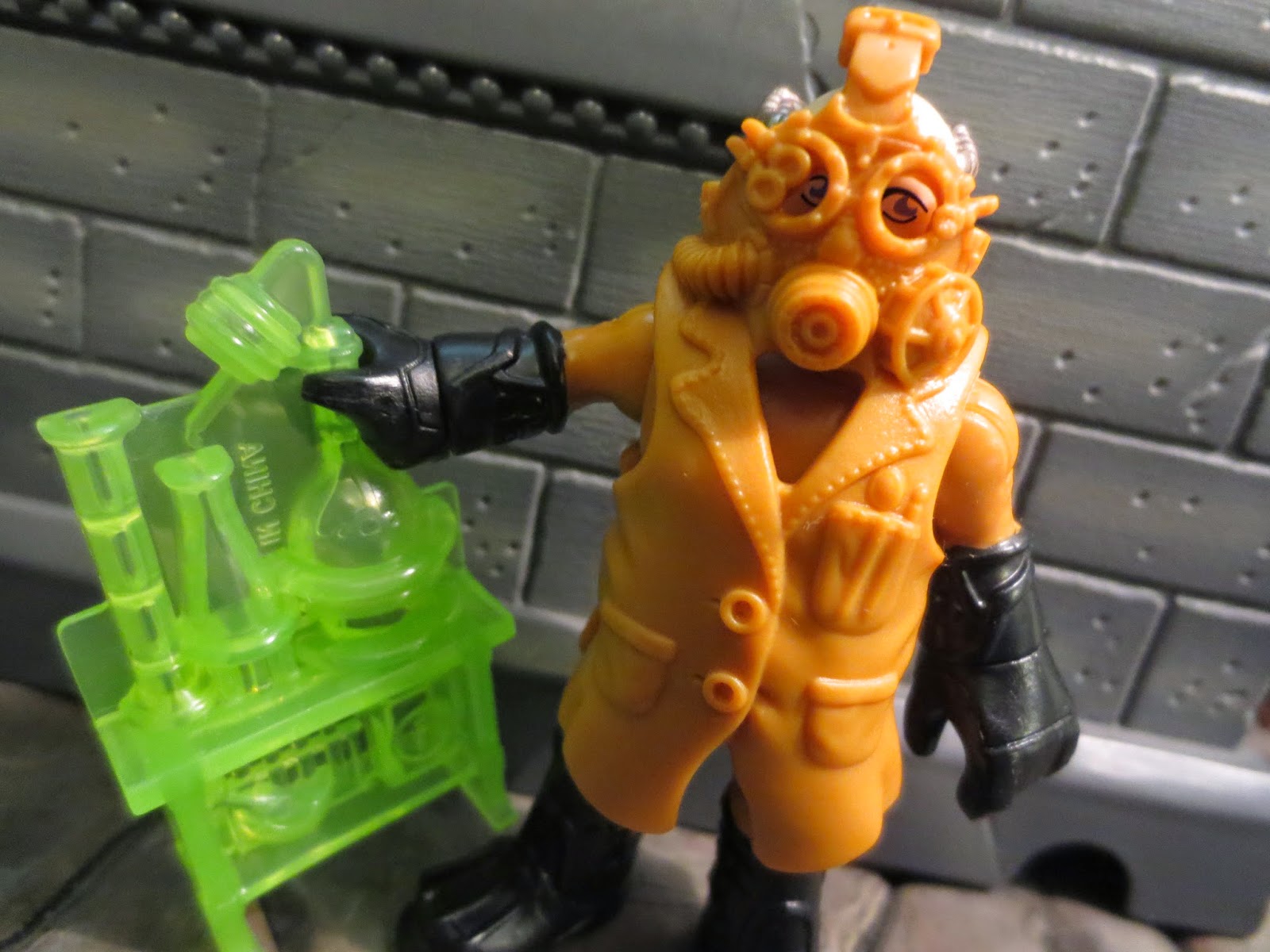 The Mad Scientist is another fun addition to the Imaginext line. He feels very unique and fun and worthy of being a blind bagged character. I really like for these blind bagged characters to be somewhat offbeat or strange rather than something that seems like it could easily be sold as a basic figure. This guy just has a great early 90's villain vibe that I love (He also makes a great foil for the Hazmat suit guy from series 3)! he's definitely my third favorite figure in this series and is well worth tracking down. I'm giving him a Great and a 1/2 rating overall. Next I'll be reviewing the Evil Robot, the eighth and final figure from series 4. Stay tuned!

From this series, I've also reviewed the Witch, the Snowboarder, the Basketball Player, the Space Gorilla, theClown, and the Boxer. I've reviewed a few other Imaginext figures, including: