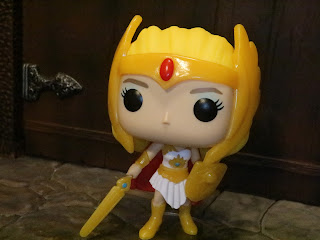 Variants have long been a part of the action figure hobby and sometimes they're pretty cool while other times they're just there to let a company more easily put out a new toy at a reduced cost. Funko releases many POP! vinyl variants and I do try to pick up most of the Masters of the Universe variants that I can get my hands on. To go along with their recent She-Ra #38 from the Retro Toys series Funko also released a Specialty Series Glow-in-the Dark She-Ra. I'm always down for more She-Ra toys and this release made sense since we've gotten glow-in-the-dark variants of He-Man and Skeletor. Why not She-Ra, right? I was curious as to how this POP! would turn out and, frankly, I'm actually pretty disappointed. It's still a nice looking POP! vinyl but the glow-in-the-dark feature is barely noticeable. Since this is a simple variant of the recently released She-Ra #38 this is a shorter review as there aren't too many difference between the two figures. Let's check out this Specialty Series She-Ra #38 after the break... 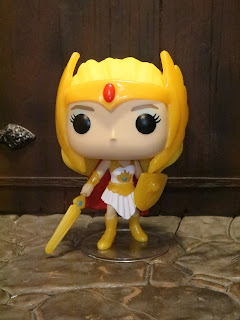 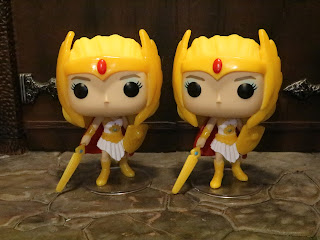 Comparison:
* The Speciality Series She-Ra #38 is on the left while the standard She-Ra #38 is on the right. What's the difference? If you look closely you can see that the yellow armor and weapons on She-Ra are a bit more gold in color than on the standard release. these are actually made from a dark yellow glow-in-the-dark plastic. It does give them a slightly different look and a very, very faint glow when placed in the dark. 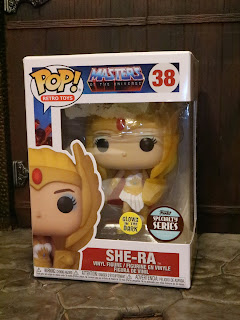 The Packaging:
* Here's a quick shot of the packaging since it is a little different. The Specialty Series She-Ra has a couple stickers on the front window. 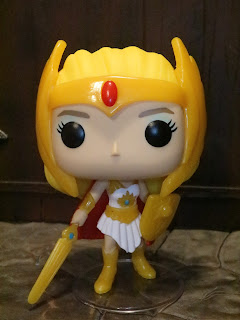 The Positives:
* Everything I said about the standard figure still applies here:
* I love the post of the figure with the sword of protection down at an angle and I love the inclusion of a stand.
* The sword and shield look fantastic. In fact, everything is a cool blend of multiple She-Ra looks.
* The headsculpt and tiara are excellent! 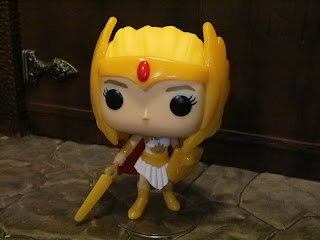 The Negatives:
* Unfortunately, my negatives are the same. One, I don't like the yellowish plastic used. Why not use gold? Having this being a glow in the dark figure could have justified that but She-Ra's glow is really, really weak. I have lots of glow-in-the-dark toys and this one is one of the least noticeable of them all. That's a miss, unfortunately, and it's a shame. A glowing She-Ra would have been amazing. 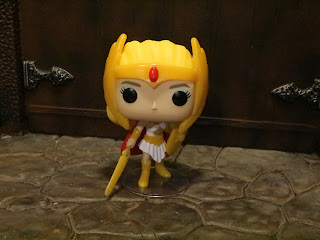 I'm really disappointed that the glow on this She-Ra is so weak! What's even worse is that without the glow there's nothing that really differentiates this She-Ra from the previous release. She's just a few dollars more than the standard release. C'mon, Funko! She-Ra deserves better than this! A slightly odd color variant (pink and gold or pink and silver, perhaps) would have been better than what was released. She's still a Good POP! vinyl, but you might as well just pick up the standard figure. You'll get the same effect.

If you're a She-Raver who digs She-Ra/ Princess Adora then check out all of the figures I've reviewed of her: The Masters of the Universe Classics Galactic Protector She-Ra, the MOTU Origins She-Ra and PowerCon 2020 She-Ra, the Club Grayskull She-Ra, the ReAction She-Ra, the She-Ra from the Super7 Battle for Etheria 2-Pack, the 1/6th scale Starburst She-Ra, the Funko POP! She-Ra #38, the POP! Pocket Keychain She-Ra, the M.U.S.C.L.E. slime She-Ra, the Sonic Wacky Pack She-Ra and She-Ra: Gold Edition, the Dorbz She-Ra, the Vinyl SODA She-Ra, and Mattel's She-Ra and the Princesses of Power She-Ra, Force Captain Adora, She-Ra vs Shadow Weaver, and Battle Armor She-Ra and Swift Wind.