Toy Review: He-Man from Masters of the Universe Magnets by Monogram International 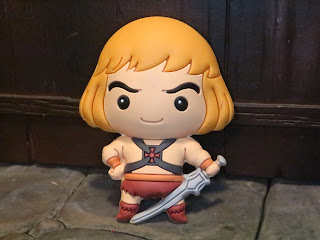 Ready for a review of something super new? Then let's check out the He-Man magnet from the Masters of the Universe Magnets from Monogram International. Last March I reviewed Monogram International's Masters of the Universe Figural Bag Clips, a series of blind bagged "chibi" styled bag clips/ key chains and now I'm checking out their blind bagged magnets in the same style.  There are five magnets in the set (He-Man, She-Ra, Orko, Skeletor, and a glow in the dark chase Skeletor) so I ordered five of them from Hot Topic. I only got two different characetrs, so that was kind of a bust, but my daughter was eager to grab a couple of the extras. they're cute and cool magnets for the fridge or whatever other magnetic surface you have that needs a touch of the Power of Grayskull. Let's take a loot at He-Man after the break... 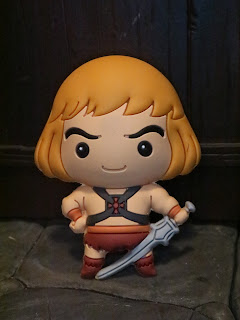 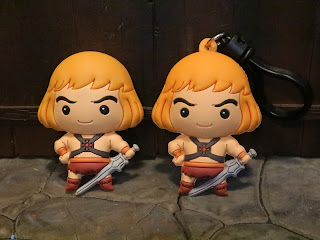 Comparison:
* Just for fun here's a quick comparison between the He-Man magnet (on the left) and the He-Man bag clip (on the right). The sculpts look to be about the same except that the magnet isn't a full sculpted figure but only the front half of one. The back is flat to allow for the magnet. 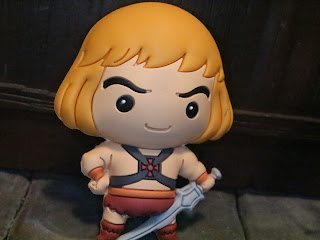 The Positives:
* Like with the bag clips from last year, I really like the look of these. They look like characters from a funny page version of Masters of the Universe  or Scribblenauts characters. The details are "etched" into the rubbery figures and, for the most part, everything is neat and clean. They're not perfect but I do like them. 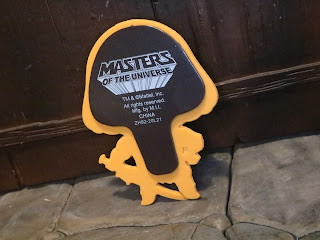 * Flip He-Man around and you can see the magnet on the back. It covers a lot of space and seems fairly strong so you shouldn't have too much trouble getting these to stay on your fridge or whiteboard. 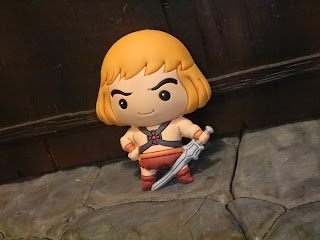 They're actually a little cheaper than the bag clips, too, which is nice. I still don't like that they're blind bagged (I'm so sick of that trend!) but they're definitely a fun little item to have around in your MOTU collection or around the house or office. The style really is very cool and a lot of fun. I'm definitely giving He-Man a Great. If anyone has an Orko or either version of Skeletor they want to sell off or trade let me know. I do have an extra He-Man and She-Ra hanging around.
He-Man/ Prince Adam is one of my favorite characters and I've reviewed so many action figures and toys based on him that he has his own review archive. Check out Fabulous Secret Powers for an abundance of He-Man reviews!