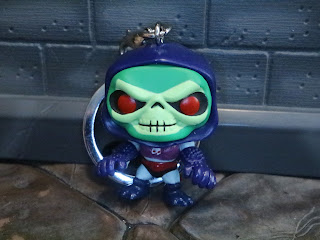 Can you believe that there have been four versions of Terror Claws Skeletor released so far this year? Four! There's the regular Funko POP! version, a metallic Target exclusive POP!, and this little POP! Pocket Keychain version in both the standard form, which I'm looking at today, and a metallic Hot Topic exclusive version. Wow! This is clearly the hot variant this year. Hopefully Dragon Blaster Skeletor and Laser Light Skeletor get some attention in the years to come. Whether you use these as actual keychains or bag clips or just take the chain off and use them as minifigures, there's a lot to love about a little tiny Skeletor. He's a whole lotta evil that you can hold in the palm of your hand. Let's take a look at the keychain Terror Claws Skeletor after the break... 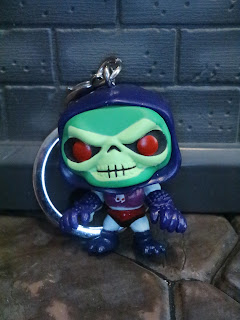 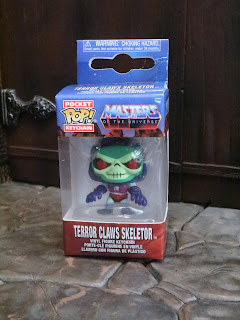 The Packaging:
* Just for fun here's a quick shot of the box. These little guys come in a tiny box that doesn't actually look like your standard POP! vinyl box. It's got a hangar so they can go on pegs on shelves or by a cash register at a store. They're collector friendly, though, so if that's important to you you'll be set. 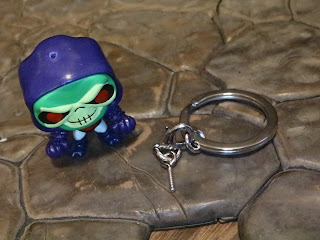 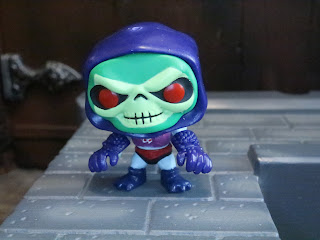 * Funko will issue one sculpt of a character and then use it in the regular POP! line, the giant size figures, and in little novelty merchandise like this. This is smaller version of the regular POP! Terror Claws Skeletor #39 which isn't a bad thing at all. While it's not the best of the vintage Skeletor variants it did turn out to be a great looking POP! and this little guy captures all of the details of the larger figure. 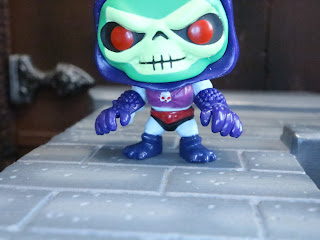 * All of the small details are present: The skull on the chest armor, the studded claws, and even the view of Skeletor's arms underneath as he's holding the claws just like the vintage toy did. 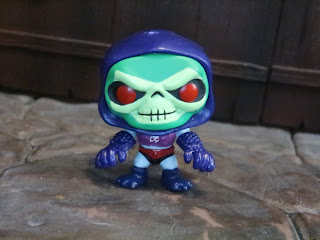 This is a pretty cool little minifigure of Terror Claws Skeletor! I don't have too many of these POP! Pocket keychains but I've been quite happy with all of the ones I've picked up so far. I don't actually use them as keychains (I just display them) but I love the look of them. I'd honest be cool with a fuller range of minifigure POP! vinyls if they could get the price down a bit more. It'd be fun if they sold packs of characters all at once, too. This is a Good and a 1/2 small-scaled version of Skeletor that adds a little evil to your pocket wherever you go!