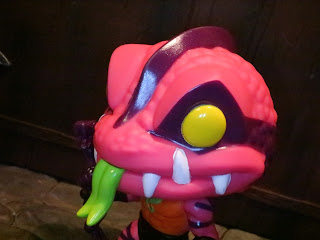 Funko's Masters of the Universe POP! vinyls keep coming (on June 30th they announced the "SDCC exclusive" Clawful and Blast-Attak) and today I'm checking out the first representative of the Snake Men in the POP! vinyl range: Tung Lashor! Seemingly more of a Poison Dart Frog rather than a snake, Tung Lashor was one of the original Snake Men from the 1985 Masters of the Universe toyline. While you'd expect that we would see King Hiss first Tung Lashor was a nice surprise. Oddly enough Tung Lashor appeared in the Filmation She-Ra: Princess of Power series but he looked completely different. I prefer his vintage toy styled appearance but I still find it funny that these figures are listed under the POP! Television brand and yet we didn't get the version of Tung Lashor from the cartoon. This guy has a great color scheme, though, and it makes him an amazing looking figure for the shelf. He sure does stand out, doesn't he? Let's check this guy out after the break... 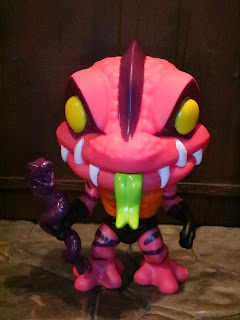 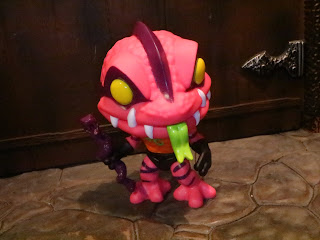 * Tung Lashor is a fantastic POP! vinyl. He's bright, colorful, and looks really cool standing on his weird, frog-like feet. The paintwork is excellent all around on this guy. He has the same swiveling head as most other POP! vinyls, too, so you can have him menacingly wag his venomous tongue in whatever direction you wish! 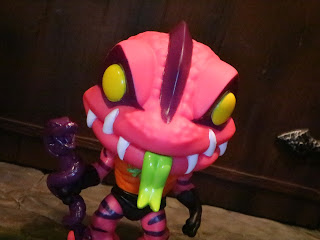 * Tung Lashor has a fantastic headsculpt! I love his eyes. They're kind of the standard POP! eyes (hehe, Popeyes) but they're definitely more amphibian. The teeth and the tongue are excellent as well. I love the greenish yellow color of Tung Lashor's tongue! It definitely looks venomous for sure. 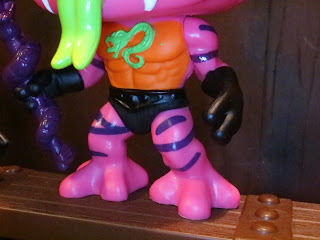 * Tung Lashor's body is nicely detailed, particularly the Snake Men logo on his chest. The extra paint flourishes like the dark purple stripes on his limbs also add to the visual appeal of the figure. 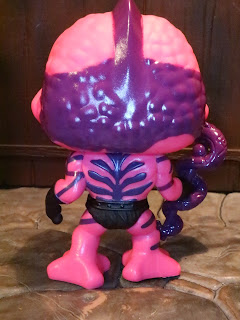 * Turn Tung Lashor around and you can see that he's nearly as colorful from the back as he is from the front. There are a lot of paint applications on the figure and they really help him pop. I doubt anyone routinely displays POP! vinyls turned around but it's nice to know the detail is still there. 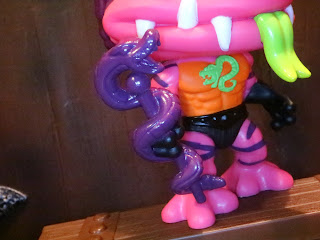 * While he isn't packing his dragonfly inspired crossbow Tung Lashor is absolutely rocking his purple snake staff. This looks really nice and has quite a bit of detail on it. It's often kind of random what accessories Funko will sculpt on the MOTU POP! vinyls but I'm glad Tung Lashor got something to show off. 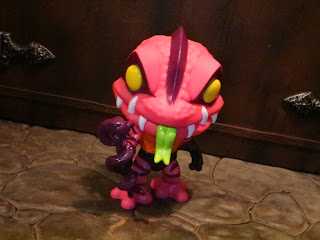 Tug Lashor is another Great MOTU POP! vinyl. Honestly, he might be my favorite from this most recent series due to his unique design, his eye-catching color scheme, and the fact that he's a character we don't see all that often in Masters of the Universe toylines. If you accept Blast-Attak as one of the Snake Men then he's the next of the faction to have a Funko POP! (he's coming soon). Will Funko get to the point where they start completing vintage MOTU factions? Will we ever get Teela, one of the main characters in the franchsie? We'll have to wait and see!