It's been nearly four months since I last reviewed a figure from Jazwares' Fortnite: Legendary Series but a few new releases have appeared lately, so expect to see some new reviews in the coming days. Today I'm checking out the Eternal Voyager, an intergalactic space explorer who appeared in Fortnite season 10. There are a few different color schemes for this guy but Jazwares went with an amazing black and electric blue design for this guy that is just absolutely amazing! I love the look of this guy! Unfortunately, he really suffers from probably the main problem of this line: Poorly functioning hinged hands. Jazwares has used the hinged hands on these guys since the beginning of the line and their ability to hold accessories has definitely been a bit inconsistent. Sadly, Eternal Voyager's hands are very, very loose. "Butterfingers" Voyager might have been a more apt nickname for him. Let's check him out after the break... 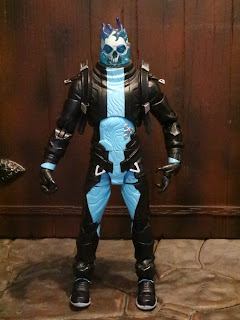 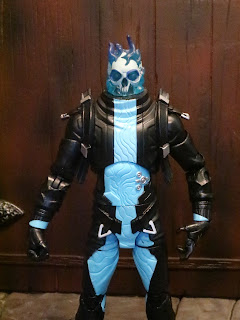 
* First things first: The Eternal Voyager just looks really, really cool. Appearance wise he's easily one of my five favorites in the line so far. His space suit is awesome with a TRON feel to it that definitely helps him stand out. The paintwork is very neat and clean, too. The straps for his backpack (AKA Back Bling) are sculpted onto the figure, which actually looks pretty cool. The little silver details on the Eternal Voyager are also quite well done. 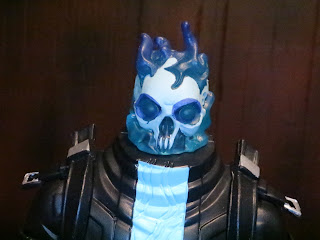 * Rather than interchangeable face plates, like most figures in the line, the Eternal Voyager has two swappable balljointed heads. The head underneath his space helmet is a flaming skull with blue flames. It's very Ghost Rider inspired if you ask me, which is A-OK. The head is molded in translucent plastic while the skull is painted on, giving it a very ethereal glow. There are also some weird designs on the sides of the skull, implying that the Eternal Voyager isn't a normal human. Of course, normal humans don't have flaming skulls either, so we didn't really need the unusual markings as evidence or anything. Still fun, though. 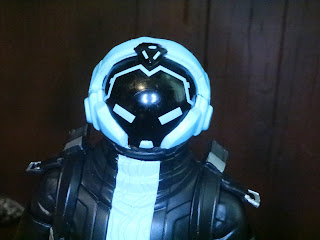 * The helmet is really cool. It continues the black and electric blue color scheme of the rest of the suit and looks really cool. The front of the helmet almost looks like it could be an LED screen to showcase the Eternal Voyager's emotions. The helmeted head does use a standard balljoint although the articulation is limited due to the design of the way the space helmet fits flush against the neck of the space suit. Think this guy would be able to join Daft Punk if he wanted to? 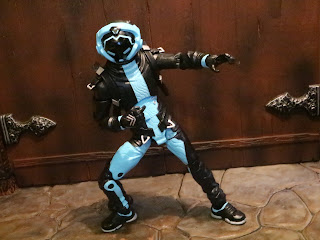 * Like nearly every other figure in Jazwares' Fortnite: Legendary Series, the articulation on this guy is incredible. He feels sturdy, durable, and has articulation that feels like it could give nearly any other modern line a run for its money. The inclusion of things like toe joints, lots of swivel hinges, double hinged elbows and knees, and butterfly pecs allow this guy to take some crazy poses. He can be very, very expressive! 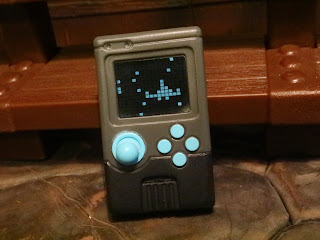 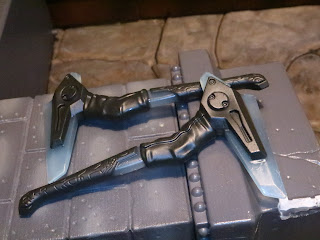 * Eternal Voyager also comes with the Cerulean Cosmic Cleavers. These are some of the coolest looking Harvesting Tools I've seen. You get a paid of them and they're a mixture of black and translucent blue. They look fantastic and make excellent melee weapons for when the going gets tough. 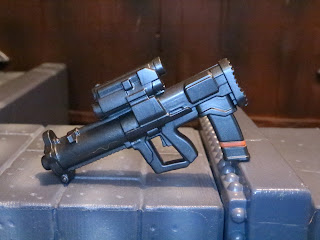 * While it looks like an automatic firearm of sorts, this is actually the Proximity Grenade Launcher. It's a very cool design with some excellent details. It even has an orange stripe on the magazine just to add a bit more color to the weapon. 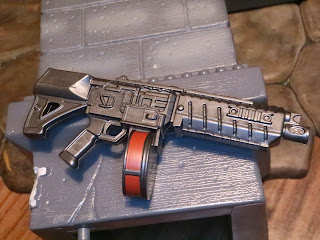 * The second firearm included with Eternal Voyager is the Drum Shotgun. This is an awesome looking gun with some killer detail. No one should mess with the Eternal Voyager when he's wielding this bad boy! 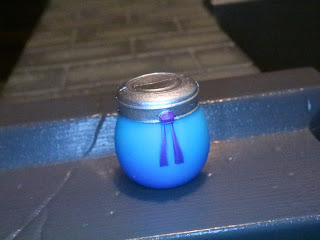 * Eternal Voyager is also toting around a Shield Potion. Many other figures have included these but they're evidently a big part of the game so I guess having multiples is a good thing. It even has a nice divot in the side to so fingers can fit inside to hold it more securely. 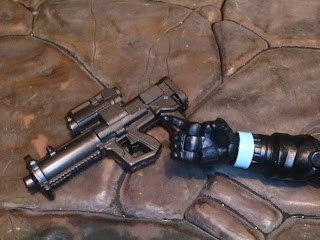 * So...the proximity grenade launcher is small. Really small. Honestly, it seems like it might actually be scaled for the 4 inch figures as it isn't even possible to get the figures fingers in the trigger card. Undersized in production, I'm guessing. That's a real bummer, too, as it's a great looking weapon. 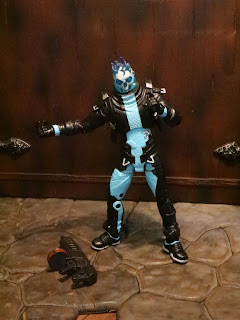 * I'm really starting to get frustrated with the hinged fingers on these guys. If they didn't have hinged fingers almost every release would be perfect, but on Eternal Voyager I can barely get him to keep his weapons in his hands. Please, Jazwares! Just use regular gripping hands! It would be so, so much better! 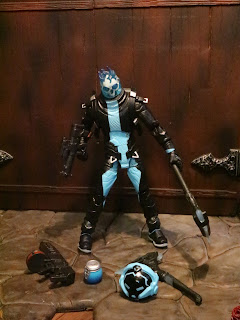 While the Eternal Voyager is one of my favorite figures in the line due to his incredible design, I gotta admit that his undersized grenade launcher and his very loose hands really dampen some of my enthusiasm for him. He's still a Great figure, don't get me wrong, but I feel like I gotta "fix" his hands before I can really enjoy him. Other than that, he's incredible. The Fortnite: Legendary Series is such a fun toyline and I'm really glad it seems to be continuing. If Jazwares can get the hand issue fixed (hands so rarely really need joints) this line would continue to just get better and better.

Do you collect these? Who do you want to see next in the Fortnite Legendary Series?


This is the first figure of Eternal Voyager I've reviewed. For more Fortnite: Legendary Series reviews check out the following: