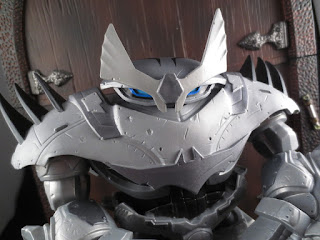 For the past 3 years I've created a list of my top 10 (and bottom 5) Masters of the Universe Classics figures of the previous year. This year, though, MOTUC didn't make my top ten lines, nor did I buy much of what was released. I've decided to continue this tradition with other lines on my Top 10 Toylines of 2016 list, though. Here's the criteria for a line to warrant a list: It had to make my Top 10 Toylines list, there had to be at least 10 releases, and I had to purchase at least 75% of the releases from that year). First up is DC Comics Multiverse by Mattel.

As a collector of pretty much anything Batman related in the 6-7 inch scale, I was really happy to see Mattel return to toy aisles with the DC Comics Multiverse line. I enjoy picking these up although, I must admit, the line was a real mixed bag this year. There really was a mix of very good figures and some extremely weak ones with a lot of average ones in between. I know these are a mass market line, so I'm not expecting DC Collectibles or One:12 Collective quality, but I did hope for a little more. Oddly, the line features dozens of original sculpts, but the sculpts were often underwhelming with some useless articulation. Still, there were some gems. Here's my list of the top 10 DC Comics Multiverse figures from 2016 along with some commentary from my original review, after the break... 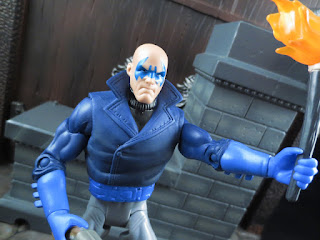 It's not everyday that we get a brand new character from the Batman mythos as a 6-7 inch action figure, so being able to add this dude to the collection is a cause for celebration. With an excellent headsculpt and some pretty sweet accessories, this guy is definitely my favorite figure in the (Dark Knight Returns) line. 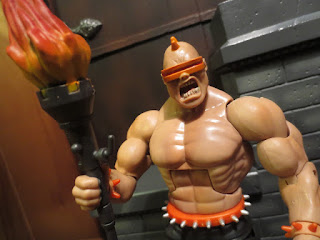 While Mezco's Mutant Leaders (they've released two versions) are incredible, Mattel's is honestly pretty impressive too. It's also only about 1/3 to 1/4 of the price and has some elements that I actually like better. 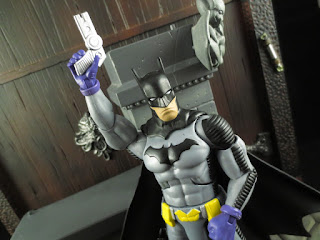 So far there's  been a decent amount of diversity between this line, the Dark Knight Returns line, and the Batman v. Superman line, but there's also been quite a few Batman figures. I don't mind, though, and this is another really good one. Great, actually. I don't own the DC Collectibles version to compare but I do think this is a really strong figures with some noticeable improvements over figures from the previous DC lines. This guy is definitely worth picking up if you're a Batman fan, so check him out! 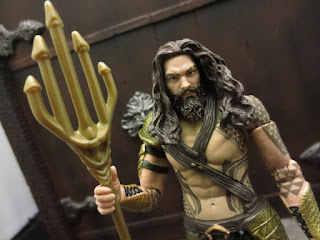 Maybe it's just that impressive or maybe it's fun to see a new take on a character we don't see in toy form that often but I'm really liking this one. So far I think this guy is the highlight of the Batman v. Superman line. He's a Great 1/2 figure and definitely worth checking out. The sculpting and paintwork are far above what we typically see from Mattel in mass market lines like this and I hope they give props to the good folks who worked on this one. He's quite a catch! 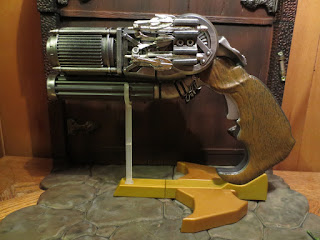 I'm sure many collectors are wondering why Mattel didn't make Doomsday the Collect & Connect piece but I have to say that I'm glad they went with this. It's truly a cool low-end prop replica and, if you've already been collecting this line, I think you'll be pretty pleased with how it turns out. It's way better than I expected it to be. Considering that this is an extra you get for buying the other 8 figures, I think it's really a Great and a 1/2 item. I'm pumped about having this on display on one of my comic book shelves. 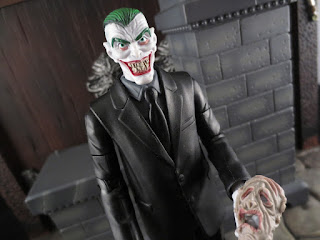 While we've seen his body many times before, this is still an excellent Joker figure that, due to the dark suit, manages to look different from nearly every other Joker figure in my collection. I like the idea of Mattel doing some very story specific figures and if the Joker here is any indication of what they've got coming up, I'll be picking up a few more down the road. 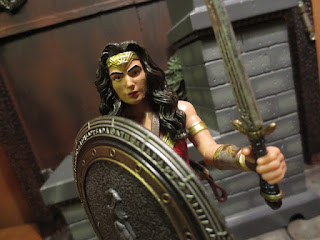 Diana does have some problems but, all things, considered, she's Great and one of the figures from this line that I think stands out the most. Her accessories are top notch, the work on her outfit is quite impressive, and she has a very colorful, appealing paintjob. 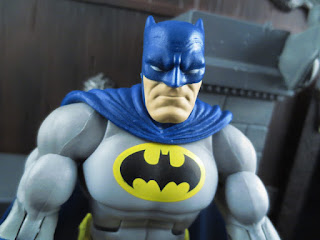 It's been a few since the last DKR figure from Mattel came out, but I still really, really like this figure. The lack of a great accessory is still noticeable (particularly when Superman and the Son of Batman have some nicer extras) but the figure is pretty great. I love the juxtaposition of the crueler, more monstrous Batman wearing his silver age costume which this figure represents. It's a great figure and is definitely worth tracking down. 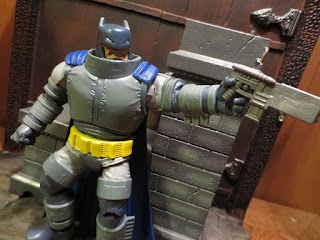 Armored Batman is a really nice looking figure and I'm thrilled to finally have this comic inspired figure in my collection. He's not the most well-articulated figure, though, which hurts the overall value. It's a shame that Mattel wouldn't make sure that a completely original sculpt was the best it could be. The paint and sculpt are cool, although this guy just ends up being more of a figure you'll want to keep on display rather than pick up and repose endlessly. 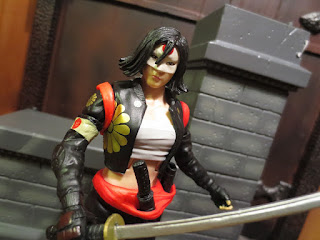 Unfortunately, Katana's bizarrely limited articulation does hurt the figure. Being a master martial artist, she needs the freedom to move better than this. She's a Good and a 1/2 figure, though, and a character that hasn't been done much prior. I can imagine a lot of DCUC fans want to track her down for the collection. 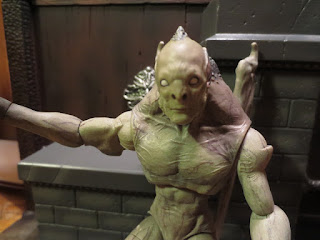 Unfortunately, there's just a lot of really weird decisions that were made here. While the sculpt and the paint are pretty impressive, the limited range of motion, inability to stand, hollow body, and questionable wings kind of erode those high points. This guy overall is just kind of an average figure. Honestly, he gets an Eh and a 1/2 rating from me. He looks great but little problems keep rearing their head little by little. 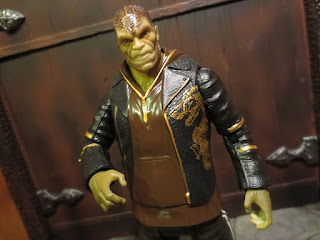 There have been a number of better Killer Crocs released over the years. I like the concept but Mattel's execution is really lacking here. Considering the annoying elements of the transition and the overly soft detail, the best I can do is give this guy an Eh. 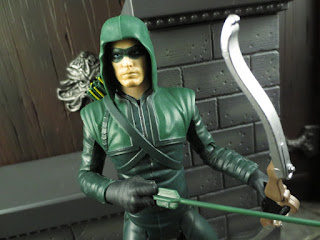 I was kind of excited about picking this figure up but ultimately it really disappointed me. I probably wouldn't have picked this up if it weren't for the build-a-figure piece (so if you want to buy this from me just let me know) as the figure just doesn't even look like it's part of the same line as the other DC Comics Multiverse figures. This guy is pretty Eh and a 1/2 in my opinion. 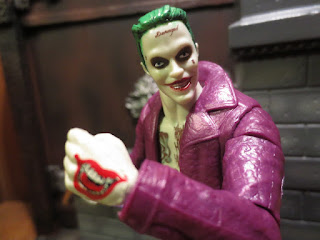 Considering that the Joker is such an iconic villain you'd really think that Mattel would have tried to put out at least one figure that knocked out socks off. Well, they didn't. I'm frustrated, too.  It's interesting to me that Mattel goes all out on 100% new sculpts sometimes but has articulation on the figures that just doesn't function properly. I mean, the Joker's knees and ankles really and truly just do not work. The joints are too close together and obstructed by the sculpt of the paints. 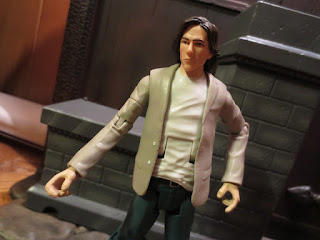 It's no secret that Lex Luthor here is a pretty "Eh" figure. He's just there. He fills a gap in the toyline (a legitimate villain) and adds a piece to the BAF. Of course, it has nothing to do with him being just a guy in a suit, as we often hear from some toy companies as an excuse for not releasing certain characters. Had this figure had some cool gesturing hands, a solid accessory, and maybe a better facial expression, he could have been great.