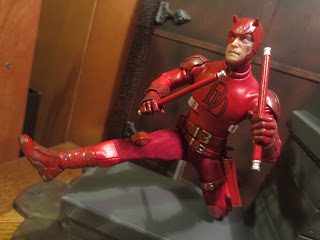 Dang! Mezco hit us pretty hard this February, didn't they? Shortly after Green Arrow's late January release we received the Punisher and Daredevil, and now the Joker is on the way! Today I'm going to check out Daredevil, another superhero who has had a very good past few years thanks to an excellent television show. While I haven't watched much of DC's television universe, thanks to Marvel going with Netflix to distribute their series I've had the chance to watch both seasons of Daredevil and Jessica Jones (I need to get around to watching Luke Cage; I'm a slow TV watcher). While Mezco is planning on releasing a Charlie Cox styled Daredevil sometime later this year or early next year, this version of the Devil of Hell's Kitchen is based on Mezco's own unique blend of various looks. Like with Green Arrow, you could probably look at this figure and see elements of multiple different costumes throughout the years from both comics and live-action sources. Mezco also has released one variant (an exclusive Shadowland Daredevil) with a Previews exclusive First Appearance Daredevil on the way, but I opted for the classic red costume. Let's check out Mezco's One:12 Collective version of the Man Without Fear after the break... 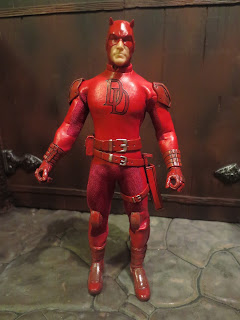 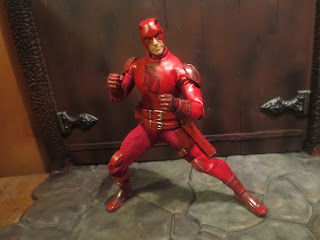 * Just like the rest of the One:12 Collective figures, Daredevil has incredible articulation. Not only does Matt Murdock have the same great articulation that the other figures do but he also has incredible balljointed ankles, something that has been lacking on many figures in the line. While he's wearing a full body suit, Daredevil still retains all of the articulation you'd expect thanks to some excellent costume design. 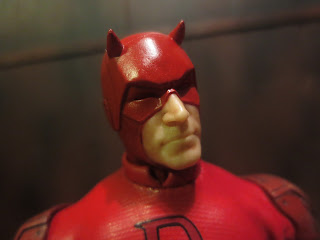 * The basic headsculpt is pretty good. It's a very traditional look although it does feature an armored appearance and prominent devil horns. I like those details as it feels like it has borrowed a little from multiple designs to create something that still feels very unique. 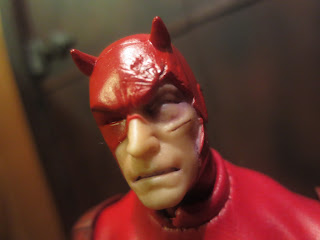 * Daredevil comes with three portraits, the second of which shows Matt with his mask damaged. Well, his face is pretty damaged, too. He's got a nasty grimace on his face, lots of damage (and a missing section) of his mask, a giant gash on his left cheek, and an eye that's been blackened and swollen shut. Mezco is nailing these battle damaged portraits, aren't they? The paintwork is phenomenal. 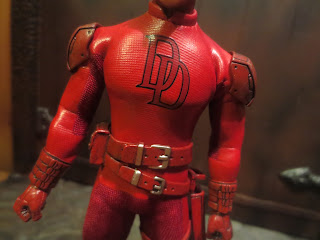 * You know what else is phenomenal? Daredevil's costume. I doubt any action figure of the Man Without Fear has ever rendered his costume better. The material is incredible with a very realistic, leather-like quality. The classic "DD" logo is emblazoned on the front of the chest in a slightly darker shade of red and the way it sits over the body looks great. Again, the use of actual outfits on these figures definitely gives them a realism we've never before seen in this scale. 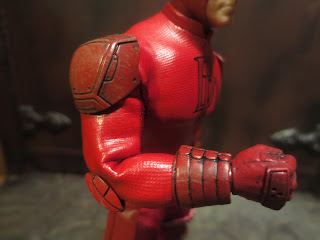 * Daredevil's costume has some armored elements permanently affixed. They look really good and are attached to the uniform in such a way so that they stay perfectly in place. The armored shoulder pads, elbow pads, and armored forearms give the figure an interesting appearance; it adds a bit more substance to the costume and makes it seem a bit hardier while still not overdoing things with too much armor. I can imagine that these limited armored bits would really be an asset to Matt rather than impede his movement in anyway. 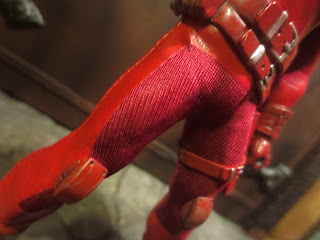 * To also help keep the figure as mobile as possible, Mezco chose to add a thinner, more spandex-like material to the inner thighs, crotch, and underarms. Not only does it add a more varied appearance to Daredevil's costume but it really does give the figure better mobility for the shoulder and hip joints. It seems like a really good design decision on Mezco's part. 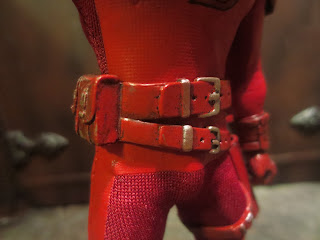 * Daredevil travels pretty light so he's only sporting one heavy-duty belt with a few extra accoutrements. On the right side are two non-functional pouches with some great paint apps to give them some depth and texturing. 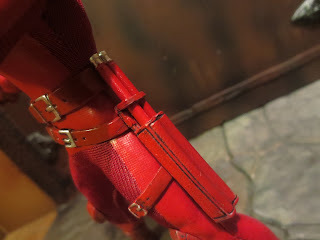 * On the left side is a holster for Daredevil's billy clubs. It's a bit tough to get the clubs in (you have to pivot his leg forward to slide them in) but they stay in securely and look good on display. 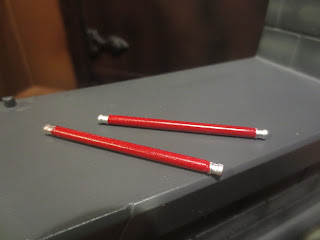 * Here's a closer look at Matt's billy clubs or batons. They're pretty simple, just red sticks with silver tips, but they accomplish what they need to do. 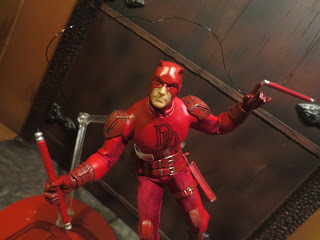 * What's a bit more interesting is the set of batons that feature a thin, black wire. The idea here is to replicate the ability of Daredevil's clubs to have a launching cable. The two batons are connected by a thin black wire that does allow for some cool poses. The wire definitely allows for poses that make the clubs look like they're swinging through the air, making for some pretty dynamic displays. 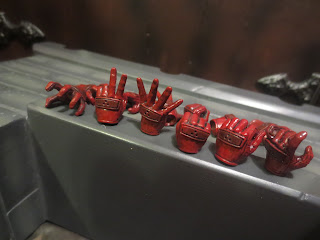 * Daredevil comes with 6 pairs of hands that are easily interchangeable. You get a pair of open  grappling hands, a pair with two fingers extended and a loose grip, a pair of open palms with splayed fingers, fists, traditional gripping hands, and two-finger grip with extended index finger and pinky. There really are a lot of options for posing Daredevil here and you can get some great expressive poses, particularly when posing him flying through the air. 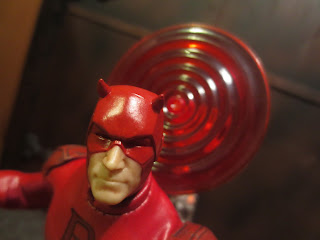 * Possibly the most interesting accessory to come with Daredevil is a translucent disc that is intended to represent Matt Murdock's radar senses. It's kind of neat and adds a unique flair to poses or pictures. The disc attaches to the posing stand via a peg and can be posed in a number of ways. I love "effect" accessories like this and I hope we see more in the future. 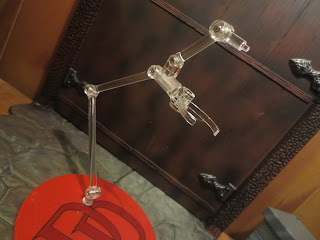 * Here's the articulated display that comes with most figures in the line. It can be inserted into the included display base where the foot peg is (you just have to remove the peg). You can get some great, secure poses here as the joints are very tight on the display bar and it can absolutely support the figure's weight. There is a second removable post that allows you to attach the sonar effect, too. 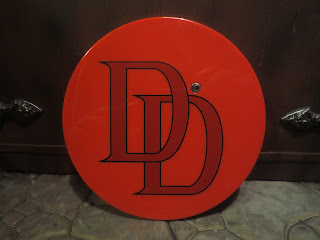 * Also like the other One:12 Collective figures, Daredevil features a round display base featuring his logo. The overlapping D's logo is emblazoned on the base and an off-centered peg helps to keep the figure nice and secure when standing up. The figures just look incredible when posed on these. 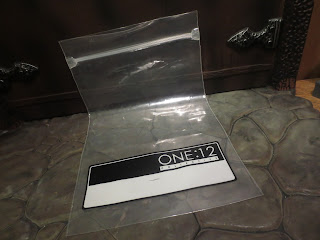 *  To keep the extra portraits and extra hands close by when not in use, Mezco also gives you a cool branded bag. It's just a simple plastic bag with a Ziploc styled bag, but it's appreciated. 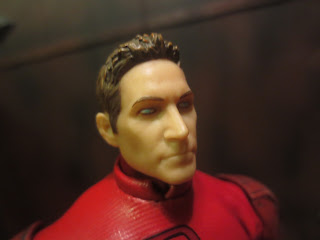 * I have one complaint with this figure: The unmasked Matt Murdock headsculpt. In the prototype and solicitation photos, Matt had his classic red hair. Unfortunately, the actual figure just has brown hair. That's a weird turn of events, isn't it? Furthermore, Mezco gave Matt absurdly milky eyes. Has Matt ever been portrayed with eyes like this? This seems really overdone and not in line with any depictions of the character I've ever seen. 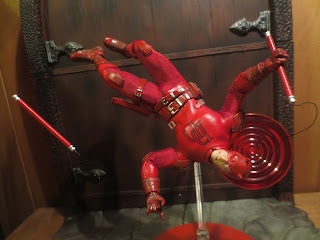 Mezco keeps the hits rolling. I do have to admit that I'm pretty disappointed with the unmasked head but everything else here is exceptional. This is another Great and a 1/2 figure in the Marvel Universe selection of One:12 Collective figures. The costume is incredible as are the variety of hands and the two masked headsculpts. This line has absolutely won me over and, looking at other reviews and forum postings, it seems like it's one other fans over, too. This guy is so much fun to pose and display, particularly in leaping and diving poses.