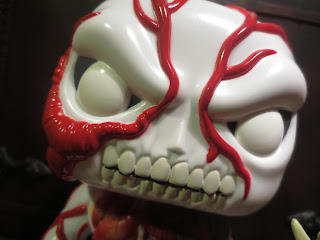 While it's only February, I can absolutely say that Funko's Resident Evil POP! vinyls are already one of my favorite things about 2017. Being a huge Resident Evil fan I've been a bit dismayed over the past few years that no company has released a Resident Evil toyline that got anywhere beyond just a  few characters. While POP! vinyls aren't your typical action figures, I'm really hoping that they manage to go deep and wide with this line. So far we've received characters from four different games, which is a nice start. We've also received some oversized 6 inch POP! figures with the GameStop exclusive Hunter and now the Hot Topic exclusive Tyrant. The Tyrant was the final B.O.W. faces in the original Resident Evil and he's a pretty intimidating guy, perfect for a 6 inch POP!. He's also available as a Target exclusive that glows in the dark. The Tyrant never glowed in the dark, though, did he? That's why I opted for the Hot Topic version. Let's take a look at this big, mean monster after the break... 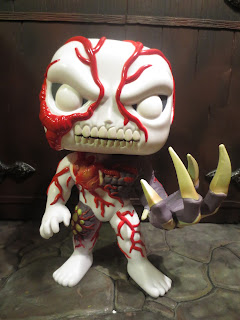 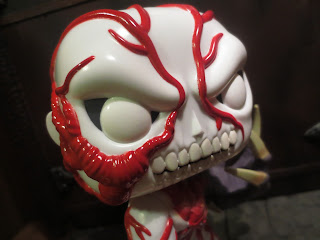 * The Tyrant is sporting the skull like grimace seen in the original game and the 2002 remake. His exposed teeth are really neatly sculpted and painted and his lifeless, milky white eyes just add to the creep factor. He's also displaying some crazy, prominent blood vessels coming out of the surface of his face. Icky. 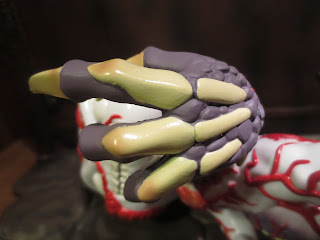 * The Tyrant's prominent left claw is his main form of offense and Funko has captured it really well in POP! form. It still looks pretty wicked, though, with giant deformed bones visible and purple, hardened flesh. 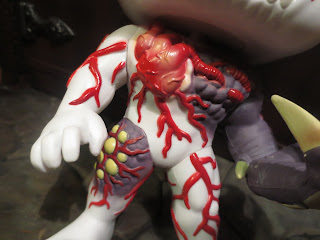 * The Tyrant's body is also covered by plenty of nastiness. Besides the weird clusters of what look like pustules of some sort, the dude also has his heart hanging out of his chest. That seems like a real design flaw to me (on Umbrella's end, not Funko's), but it certainly looks scary. Some people wear their hearts on their sleeve; the Tyrant wears his on his chest. 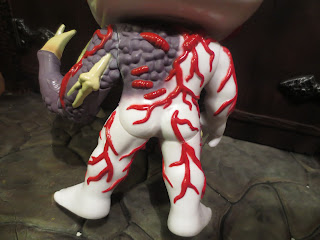 * The paintwork on this guy is very neat and fairly complex for a POP! I love the bright, vivid red used on all of his veins and arteries. 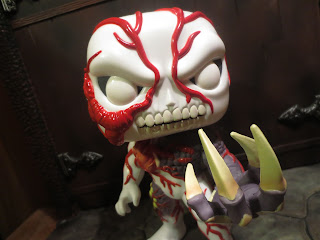 The Tyrant is another Great POP! vinyl in this line. He's absolutely a character that makes good use of the larger size and, considering he's a POP!, manages to be fairly intimidating. This guy is a real winner in this line. Let's hope that Funko reveals some more Resident Evil POP! vinyls for the future. I'd love to at least see some standard zombies, Chris Redifeld, Ada Wong, Claire Redfield, Ashley Graham, Barry Burton, a Crimson Head, and some of the crazy creatures from Resident Evil 4. Oh, and Tofu. Because why the heck not.


I've actually reviewed a couple of other Tyrant figures including NECA's 10th Anniversary Tyrant and Toy Biz's Tyrant and Tyrant/ Mr. X from their Video Game Superstars line. I've also reviewed the rest of the first series of Resident Evil POP! vinyls, including: