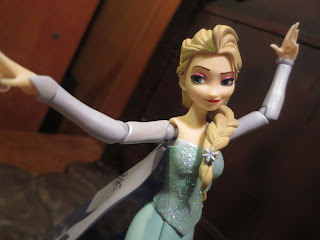 One of the many cool things about having a child is that you get to share things that you love with them and they get to share things they love with you. While my daughter has become absolutely obsessed with Star Wars, superheroes, werewolves, the Super Mario Bros., trolls, yetis, and the like, I'm now a pretty big fan of Frozen. It's certainly not my favorite movie of all time, but I'd definitely say it's my favorite non-Pixar Disney film (though, full disclosure, I've never been a huge Disney fan). Heck, it very well could make a list of my top 50 movies. It's a darn good story with some excellent characters, great music, solid action, and humor that I really enjoy. It also has Queen Elsa, who has one of the best character designs I can think of. I love her story arc in this film and the "Let it Go" sequence is absolutely fantastic. I know it's been around for awhile, and lots of folks are probably tired of hearing people belt it out, but my gosh does it work in that film. When I found out that Good Smile Company was putting out an Elsa in their Figma range of figures, I was actually pretty excited. I've never owned a Figma product before, so this was a chance to try one out. Mine arrived a week or so ago (unfortunately after a pretty substantial snow storm) and I've been enjoying it for a few days before sitting down to right a review of it. Not only does the set include Elsa, but you get Olaf, too! Pretty cool, right? Let's open up the gates and check this one out! 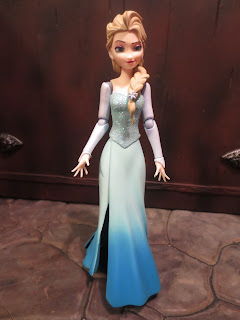 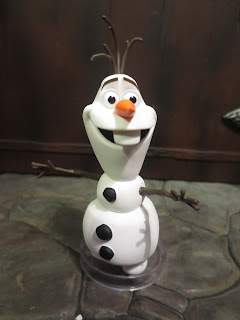 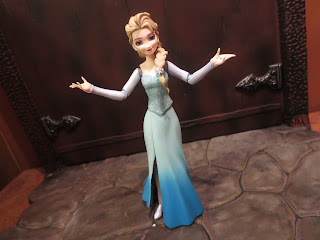 * I've always heard good things about Figma, and I'm glad to see that it's true: Their articulation scheme is really, really good. Everything move so smoothly and the joints are nicely integrated with the sculpt. Elsa is definitely not a "toy" that you want to let your kids handle, but I didn't have any breakage concerns handling her. She felt rather solid for such a slender figure. 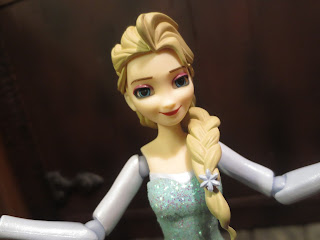 * The sculpt on this figure is really gorgeous. It can be rather tough to capture the appearance of a digital character but Max Factory did a great job. The nose, the hair, the braid, everything is just excellent. Oh, and the eyeballs are articulated. Yes, you can give Elsa some fantastic expressions and add some real personalization to the figure. I'll get to that a bit more in a minute... 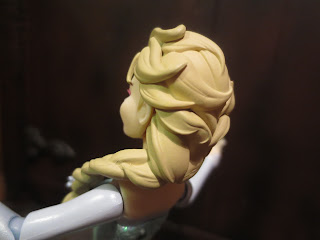 * Here's a closer shot of Elsa's hair. The sculpt is very nice with lots of well defined waves and strands of hair. The color seems perfect, too. 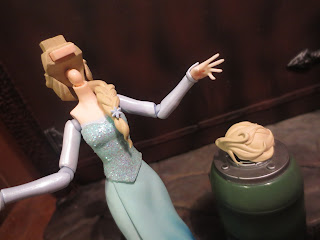 * What is that? This shot is really just to show you how changing out the faces and moving the eyes works. Remove the top part of Elsa's hair and you can slide her face off. Behind the face, you can see the eyes. They each have a little square hole in them, which can be manipulated with a small tool included with the figure. Everything is easy to change, requires little to no force, and goes back together rather easily. It's a great design! 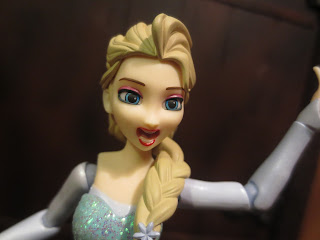 * Here is Elsa's second face: She's singing! Yup, this is the face to display her with if you want her belting out "Let it Go" on your shelf. I love the open mouthed pose, as it looks really good when viewed from a distance with her arms spread out wide! 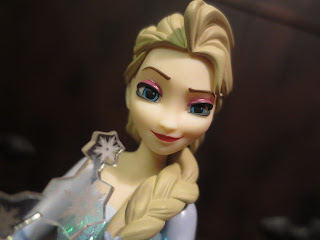 * Last, and, certainly not least, is my favorite headsculpt: The Elsa smirk! This is the face Elsa makes when she's thinking: "Oh, you're a Disney Princess, are you? Well guess what? I'm a Disney Queen." Fantastic work here, and the articulated eyes just make it even better. 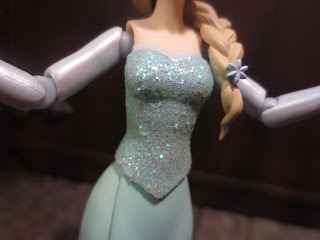 * Elsa's dress is covered with a sparkly texture that really looks pretty cool. It's glittery, but it doesn't seem like it's going to fall off or anything. It actually adds a lot of depth to the look of her dress. 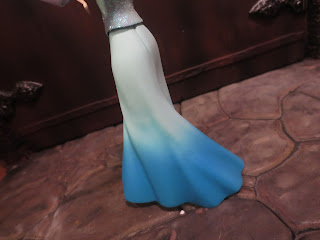 * Elsa's lower dress is given a really nice paintjob that fades from a darker blue at the bottom to a lighter blue at the top. It's a nice touch that adds a bit more life to the outfit. 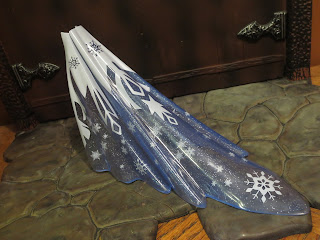 * To replicate Elsa's cloak, Good Smile Company went with a translucent plastic cloak that is covered with an elaborate printing of snowflakes, diamonds, and whatnot. The cloak is made from four separate pieces (the main train, the left and ride sides, and a piece that connects those three while plugging into the hole on Elsa's back. It takes a bit of finagling to make it look right, but the work on this is beautiful. 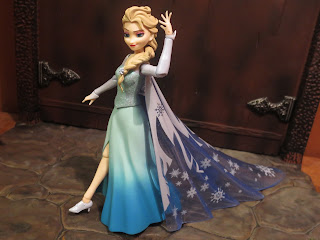 * Here's the cloak on Elsa. It looks pretty impressive, right? This is an incredibly gorgeous figure and the cloak really adds a lot to the shelf presence of the piece. It also helps keep Elsa standing, meaning you really have no need for a stand when she's wearing it. 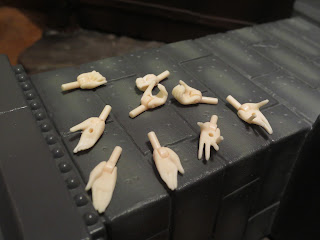 * Elsa comes with 9 hands, and they swap rather easily. She has a pair of open palms, a right open palm that can hold one of the snow effects, a pair of fists, a pair of standard grips, and a pair of expressive that can also each hold a snow effect. 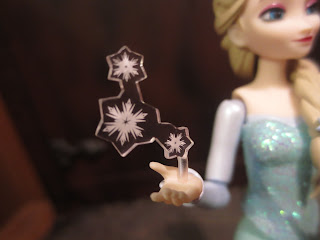 * Elsa comes with two snow effects that represent her ice magic. The first is a clear piece that includes three snowflakes. It might take a bit of patience but it certainly can fit very securely into the hole on the palm of one of the three hands with that feature. It looks very nice in person. 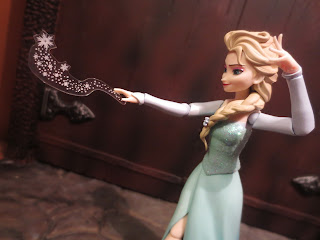 * The second effect is a stream of ice magic. Again, it's a very simple translucent piece of plastic, but it looks great when paired with a cool pose. This one's my favorite of the two effects. 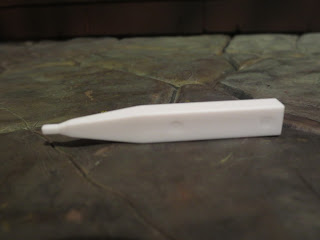 * Here's the tool you use to change the eyes on the figures in the set. It's a simple little piece, but it does it's job well. 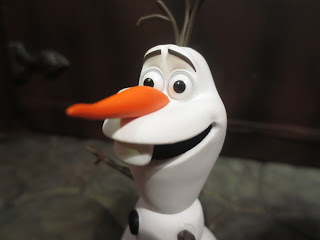 * Olaf! I love the sculpt on Olaf! Max Factory did an excellent job of translating this little guy into a three dimensional figure. He has some very thin parts, such as his hair and his arms, so be careful, but the nailed his expression and proportions perfectly. 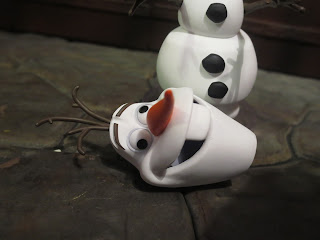 * Olaf's eyes are articulated as well. The back of his head is removable, allowing you to give him any variety of silly eye expressions. This feature is really fun on a character like Olaf, as odd poses just look right. 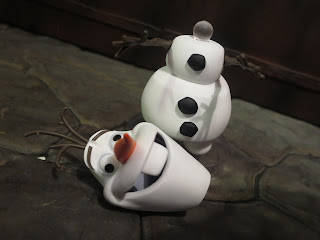 * Also, since his head is a balljoint, it pops off! Yes, you too can have Olaf running around without his head! 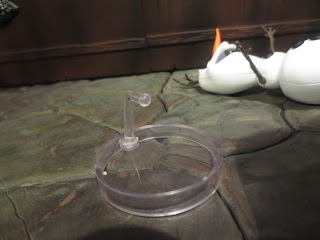 * Since he can't really stand on his own, Olaf comes with his own stand. It's a simple clear, flat disc with an articulated post (a balljoint at the bottom) that plugs into Olaf's back. He stands on it just fine and it will help him from taking a dive off of your shelf. 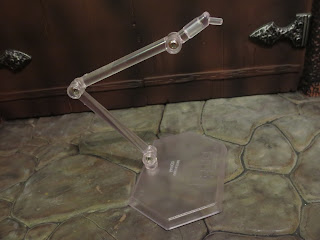 * Elsa also comes with what seems to be a standard Figma stand. It features quite a few points of articulation, including a swivel/hinge base, a hinged mid section, and a hinged top with a swiveling peg. The peg can plug right into Elsa's back if you want to pose her in a bit more of an expressive pose. 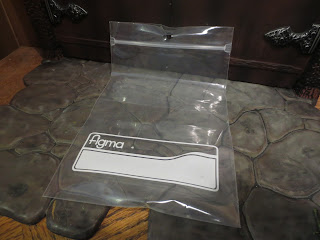 * To store all of those little hands and accessories, Figma has included a branded plastic bag. These things are so simple, but my gosh do I love them. Now I think I know where Mezco got the idea for including these with their One:12 Collective figures. 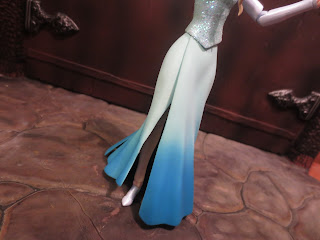 * Elsa has full leg articulation but it's all hidden underneath her dress. Due to the plastic of her dress not being very flexible, it's very hard to make much use of her legs. I really think the figure should have included an alternate dress that was much more pliable to allow the figure to take more dynamic poses. 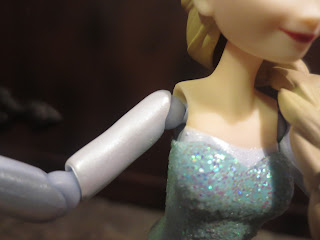 * I love the range of movement in Elsa's shoulders but I'm not digging the unsightly gab here. Every other joint looks perfect, but this one is a bit of an eyesore in some poses. 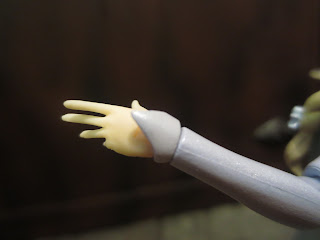 * See the little ends of the dress on Elsa's wrist? They're tiny as heck and they have the tendency to go fall off as soon as the hand is removed. I wish these had been part of the arm sculpt. 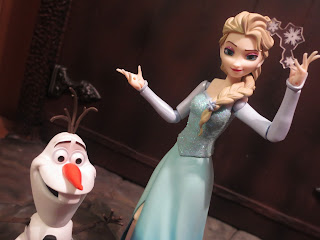 While I have some complaints with this figure, overall it's very hard to have much to complain about toy wise: The sculpt, paint, accessories, and even the articulated eyes are all really, really well done. Olaf is great, too, and makes a nice little companion. I don't know if Figma will ever make any other characters from the film, so at least we get someone for Elsa to interact with. As it is, though, the fairly high price of the figure definitely makes some of the little problems seem a bit more pronounced. Still, this is a Great and a 1/2 figure, though, and a real treat for Frozen fans.

You know what? I have reviewed another Elsa and Olaf item: The POP! Disney Elsa, Marshmallow, & Olaf from Frozen set.